Accessibility links
U.S. Progress In Kandahar A Matter Of Whom To Trust One is a local Afghan warlord, the other is a tribal leader. The two men, and their relations with U.S. troops serving in Afghanistan, illustrate a challenge as the military tries to build enduring partnerships to rid the area of Taliban and bring stability to the country 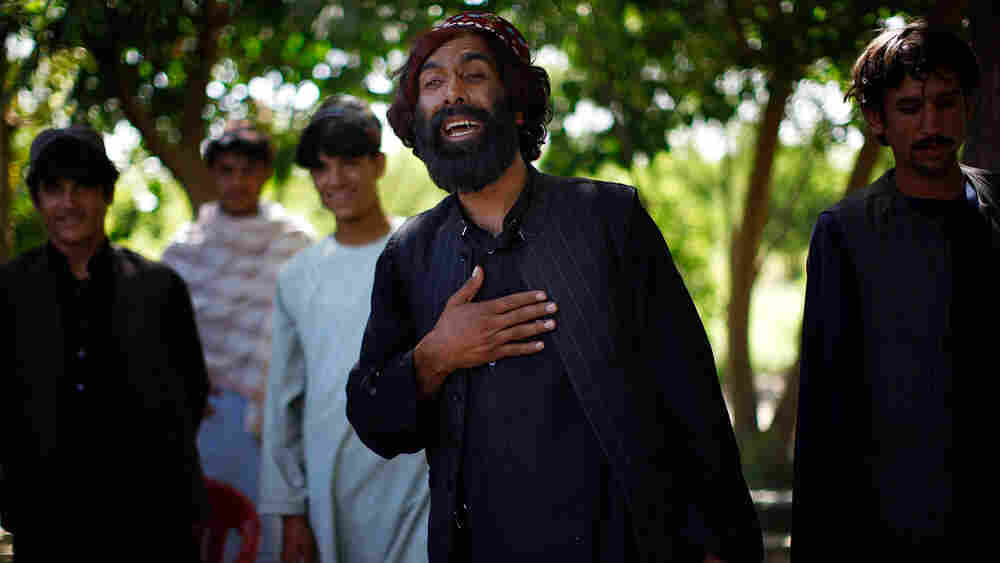 Local warlord Haji Ghani meets with officers and soldiers from the 101st Airborne Division in Sangeray. The people in Sangeray are scared of the Taliban but "straight terrified" of Ghani, says a U.S. Army captain. David Gilkey/NPR hide caption 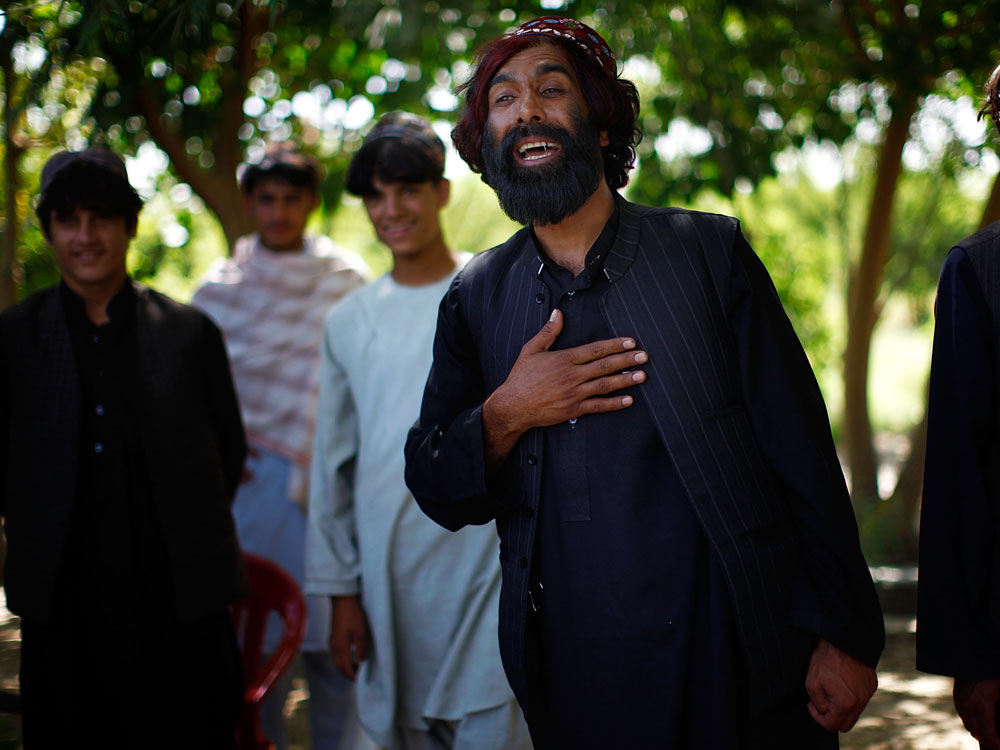 Local warlord Haji Ghani meets with officers and soldiers from the 101st Airborne Division in Sangeray. The people in Sangeray are scared of the Taliban but "straight terrified" of Ghani, says a U.S. Army captain.

In Kandahar province, there are two Afghan powerbrokers. One is a warlord; the other is a tribal leader. One is working with the Americans, while the other is far more tentative in his support.

The two men, and their relations with U.S. troops serving in Afghanistan, illustrate a challenge as the military tries to build enduring partnerships to rid the area of Taliban and bring stability to the country.

At Combat Outpost Sangeray, just north of Kandahar city, Army Capt. Nick Stout wants to put an end to the grenade attacks that have been plaguing Alpha Company in recent weeks.

He assembles his soldiers of the 101st Airborne Division and some Afghan police inside his operations center, a plywood building in the outpost, to discuss the matter.

Stout wants an Afghan official to join in, too, because the Americans put a premium on what they call "partnering."

"We're going to try and get Haji Lala over here, too. I don't know if it's going to work, but this is his chance," Stout says.

Haji Lala, expressing his reluctance to be seen with Americans.

Haji Lala is a local tribal leader in this part of Kandahar province. His position is akin to the mayor of the village.

Stout is not so sure he will cooperate because Lala is a reluctant ally, like a number of Afghan officials.

"I'd define him as a fence-sitter, too," Stout says.

Lala only took over the tribal leadership because his brother was killed by the Taliban. Everyone says he prefers business to fighting.

"Gentlemen, this is our opportunity to stand all together and go into Sangeray and say, 'Look, something's got to change,' " Stout says.

Then he turns to Lala. 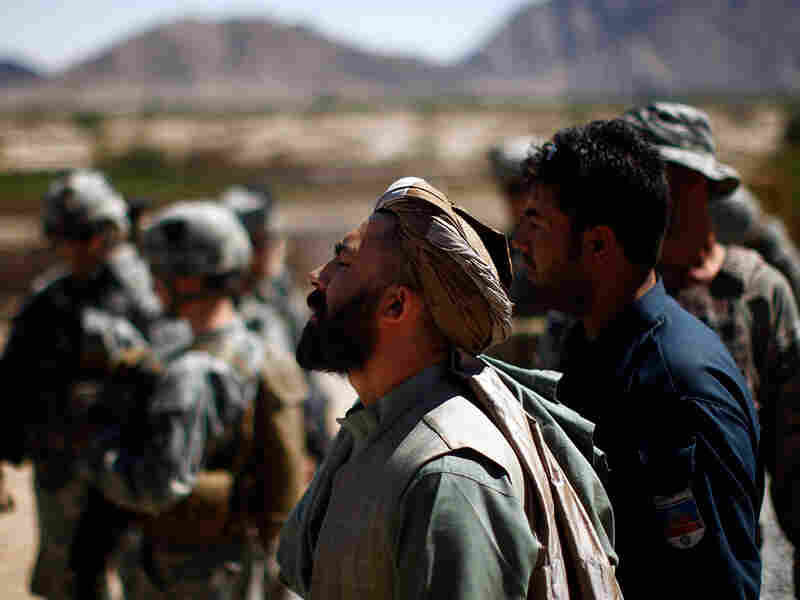 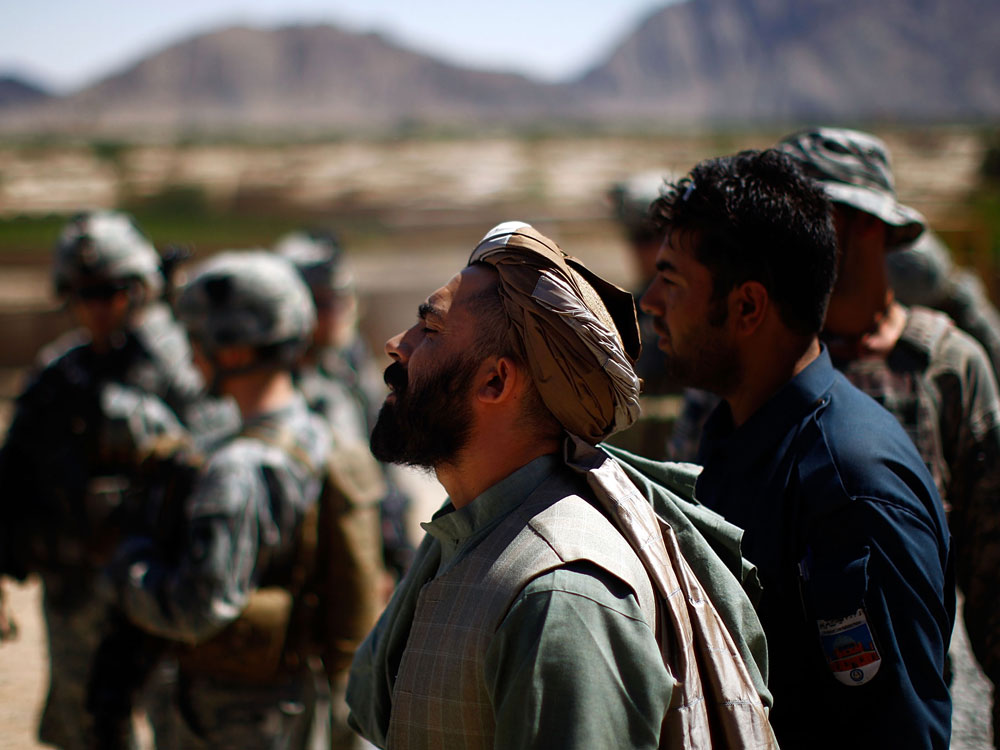 Haji Lala, a tribal leader in Sangeray, looks on as a U.S.-Afghan joint patrol enters the village looking for teenagers believed responsible for throwing grenades at coalition patrols.

"I would really like it if you -- I mean if you wouldn't mind it -- I would like you to come with me," Stout says to Lala.

Lala laughs nervously and says he shouldn't be seen with the Americans.

His excuse is that a tribal elder shouldn't patrol with American troops.

The Americans try to convince him, but he doesn't budge and soon walks out.

Stout can barely contain his frustration and says he doesn't doubt the rumors that Haji Lala has links to the Taliban. What the village needs, he says, is a real leader.

"We need a guy like Haji Ghani in Sangeray. The people are scared of the Taliban, but people are straight terrified of Haji Ghani," Stout says.

Terrified isn't the word that comes to mind when arriving at Ghani's compound a few miles away. A sign on the white-washed guesthouse declares, "Welcome to Uncle Haji Ghani's Nature Park."

There are well-kept flower beds of almost every color imaginable. Servants dart about. And under a grove of tall eucalyptus trees, Haji Ghani appears, smiling and warmly hugging each one of his American guests.

Take me to patrol. When they throw a grenade, I'll shoot them myself and then they'll think twice about it.

Ghani is tall and rangy, dressed in black, with a pistol tucked in his waistband. He has a thick pirate's beard. His long hair has streaks of red dye.

And over the course of a long lunch of kabobs, he is at times comical, charismatic and menacing.

Consider his quick solution for the grenades that are, at times, thrown at U.S. troops by teenagers: "Take me to patrol. When they throw a grenade, I'll shoot them myself and then they'll think twice about it."

There are few attacks on the side of the river where Ghani's compound is situated. That's because after a few roadside bomb attacks, Ghani gathered the entire village.

Capt. Paul DeLeon commands an American outpost just up the hill from Ghani's compound and recalls the meeting.

"He spent about two hours yelling at the elders and telling them, 'You have to take ownership of your town,' " DeLeon says.

"And then he went on to threaten the families of the Taliban. 'Your son is off on his own; you need to get a hold of him.' Or, 'If I find an IED near your house in the future, it's going to be you that I turn to,' " DeLeon says.

Ghani brags that his lecture pretty much put an end to roadside bombs in the area.

"I can guarantee you in whole Kandahar province or Zhari district, no one can show you anywhere secure like this area," Ghani says.

With little prompting, he shows off his battle scars -- puckered, pinkish wounds that are on his arms, his hips, his legs and even his feet.

"I don't have an education; I haven't got any religious or any school education. But for a fact, I know that I have a lot of experience in fighting," Ghani says.

"He'll also tell you stories of beating people up and killing people and things like that," DeLeon adds.

And things like making money. Just along the river is Ghani's gravel pit. His stones blanket many of the combat outposts north of Kandahar.

DeLeon and other American officers say they'd like to clone Haji Ghani, because he's willing to take on the Taliban, unlike Haji Lala -- the reluctant tribal leader.

When asked about Lala, Ghani dismisses him with a wave of his hand.

"He doesn't do his job very good. He doesn't cooperate with us. If you show that kind of cowardice against the enemy, of course the enemy is going to get stronger and [have the] courage to attack us," Ghani says.

Ghani might be willing -- even eager -- to take on the Taliban. But others have mixed feelings about the man.

An Afghan-American translator working with the Army points to a highway bridge thick with traffic. Rumor has it, he says, that Haji Ghani demands an illegal toll from each truck.