Accessibility links
Western Swing Gets Texas Town Scootin' Again Fiddlers, guitar players and singers gathered in tiny Goree, Texas, for a music camp. The camp is about equally divided between children and adults, even though the style of music was popular more than half a century ago. 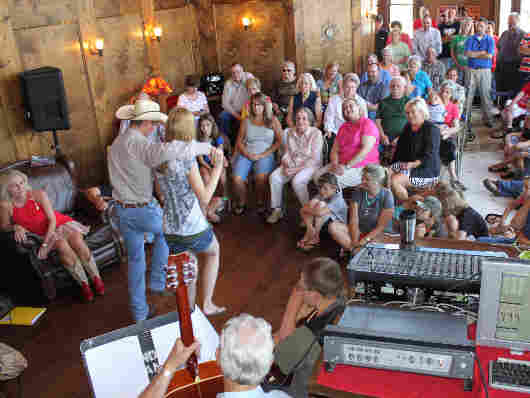 If you're not from Texas and you imagine what it's like, this is the Texas you think of: horses, cattle, rolling grassland that finally meets an endless blue sky at the far horizon. In Goree, Texas -- population about 300 -- there are people who step into a stirrup with the same ease that you press your keyless remote and climb into the car.

Out here, people are scarce. There's the unavoidable knowledge that the past was greater than the present is or the future will ever be.

"I want to be a cowboy sweetheart. I want to learn to rope and ride. I want to ride through the plains and deserts, out west of the great divide," sings 17-year-old Ashley Wheeler before a group of about 40 people, unabashedly.

There might be a tendency to think, "Well, how much talent could there be out here? There's not that big a pool to begin with."

But, it turns out, it's not just about raw numbers. Dozens of fiddle players, guitar players and singers of all ages come to the Bobby Boatright Memorial Music Camp to learn how to play Western swing. Boatright was a well-known local fiddle player who played with some of the greats.

Western swing originated in the late 1920s. While the rest of the country was boogieing to big band music or jumping and jiving in jazz halls, country music lovers could square dance -- which was so last century -- but that was about it.

That is, until Western swing. It was a cross between big band and jazz, a new sound meant to get cowboy boots scootin' across Western dance floors. And it did.

"We expose the kids to the Western swing songs," Boatright says. "But they can take what they learn here and really apply it to any music in the world. If you're a good Western swing player, you can flat-out play anything." 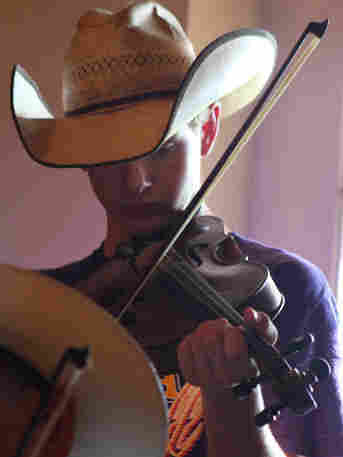 "Normally there's not many people around here, so I usually have to play by myself," says Ryde Cude, who lives outside of Goree, Texas. Vikiann Gunter for NPR hide caption

The camp is for both children and adults, and, this year, it's about equally divided.

Everyone here, teachers and students, come from nearby small towns -- some of them really small. Munday, Weinert, Knox City, Seymour, Benjamin and Pampa are the bigger towns. Fifteen-year-old Ryder Cude, cowboy hat atop his head, is from the Goree area.

"Normally there's not many people around here, so I usually have to play by myself," he says. "But every now and then, I can find a jam session in Seymour or Knox City where I can go play with some people."

Ryder has been playing for six years and this is his fourth year at the Western swing summer camp. There are three hours of instruction in the morning, three hours in the afternoon, and then, after dinner, a group jam session.

"It's a little tiring sometimes but it's still fun," says Cole Redwine, 10, who has been playing fiddle for just a year.

"The worst part is probably waking up early," Cole says. "And the best part is just doing what I love, playing the fiddle and hanging out with my friends."

Harkening Back To A Different Time 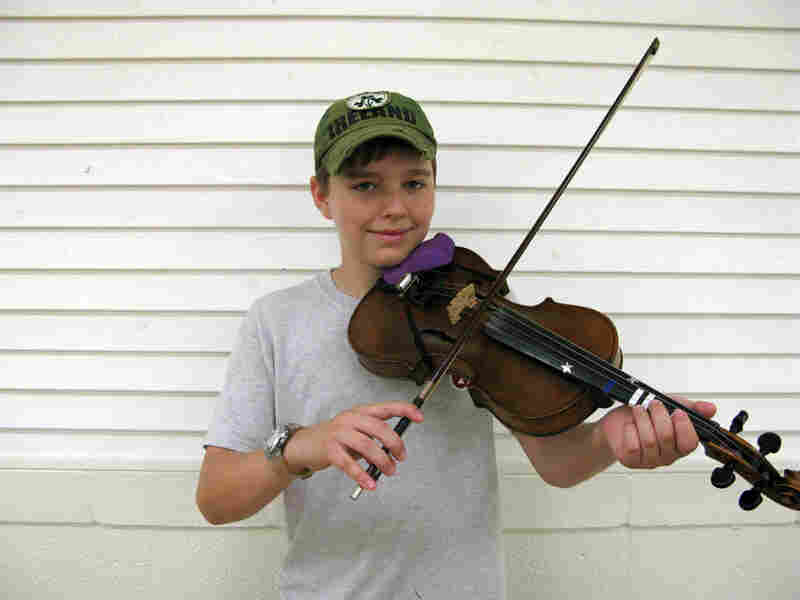 "It's a little tiring sometimes but it's still fun," says Cole Redwine, 10, of the camp. Wade Goodwyn/NPR hide caption 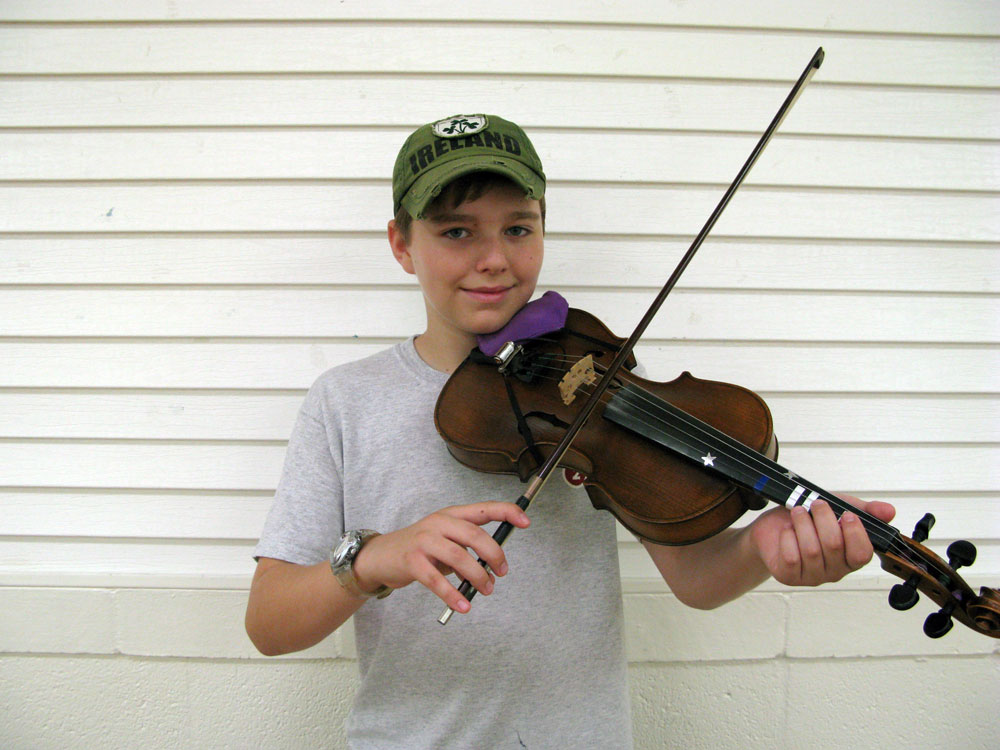 "It's a little tiring sometimes but it's still fun," says Cole Redwine, 10, of the camp.

When you ask Cole -- or any of the other children here -- why they have any interest in playing a style of music that was popular over half a century ago, the answer almost always involves family.

From the way they mimic their parents' style of dress and speech to the "yes sirs" and "no ma'ams," playing Western swing is a kind of love letter from younger to older generation, a voicing of solidarity. If this cowboy music and cowboy way of life is slowly fading away, it seems no one here wants it to.

But nearly half the campers are adults.

"I'm in the cattle business, and I play the fiddle," says Duane Johnson, 69. "And I'm just down here trying to learn a few new tunes."

Johnson grew up dancing to Western swing. Back then, you got dressed up, picked up your date.

"When we were young and before my wife and I married and then after my wife and I were married, we went to rodeo dances and we had square dance clubs and did a lot of dancing," Johnson says. "It was the social thing to do."

The camp is housed in what used to be the junior high in Goree -- that is until last September, when the school district gave the building and campus back to the town and said, "Good luck." That was a big blow because the junior high was pretty much the only reason anyone still came to Goree. 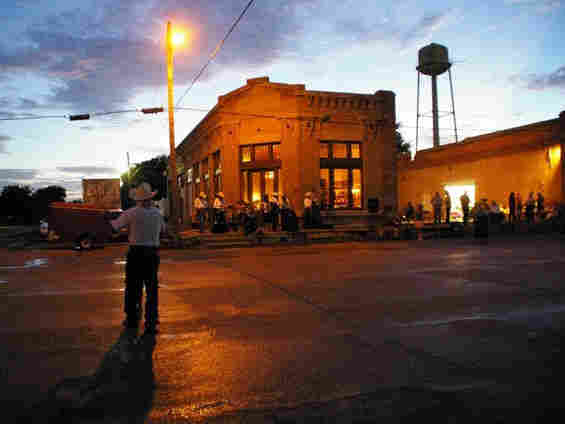 During the first night of the music camp, a band called The Sidekicks plays in front of the First National Bank building. Hanaba Munn Welch hide caption 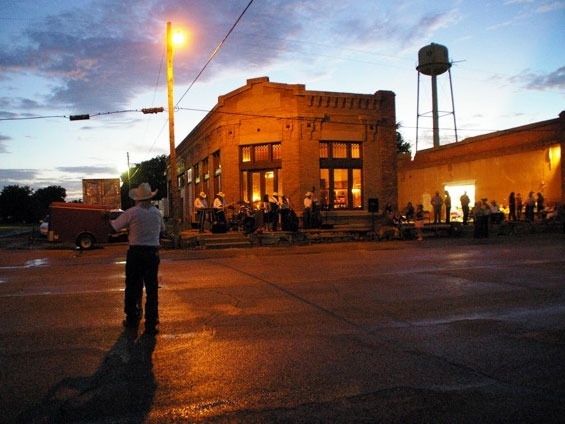 During the first night of the music camp, a band called The Sidekicks plays in front of the First National Bank building.

Tammy Trainham looks out over the school courtyard and smiles. She is the mayor's wife and this is her doing -- she talked them into bringing the fiddle camp here. These five days are all that's left between Goree and oblivion.

"We're trying to rebirth a town," Trainham says. "It was dead -- graveyard dead."

And the Bobby Boatright Memorial Music Camp needed a fresh start, too.

For the first nine years, it had been on a ranch. But the beautiful junior high in Goree -- with its expansive cafeteria, gym and big, window-filled classrooms, not to mention powerful air conditioning and new carpeting -- seemed nice. A new beginning after the death of their namesake. So here they are: School, music camp and town, trying to keep each other -- and Western swing -- going.