Accessibility links
Legions Of Iraqi Squatters Grow Even As War Recedes Displaced by the war and sectarian fighting, an estimated 500,000 squatters are living in abandoned buildings or on government land, unable to return to their homes. U.N. officials say the Iraqi government and aid agencies are only now recognizing the magnitude of the problem.

Listen
Legions Of Iraqi Squatters Grow Even As War Recedes 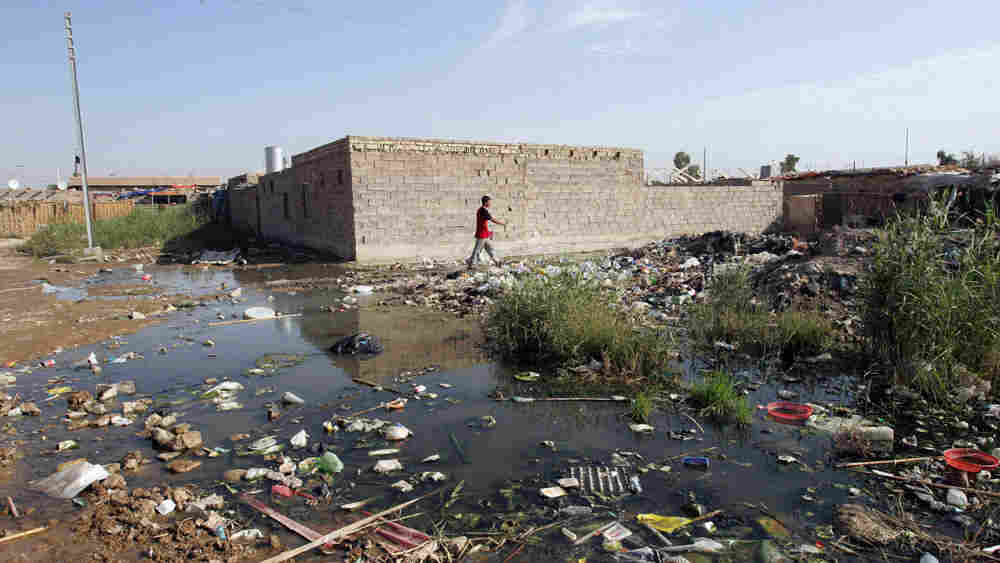 An Iraqi man walks past sewage and rubbish in a squatter camp in Baghdad in 2008. Sabah Arar/AFP/Getty Images hide caption 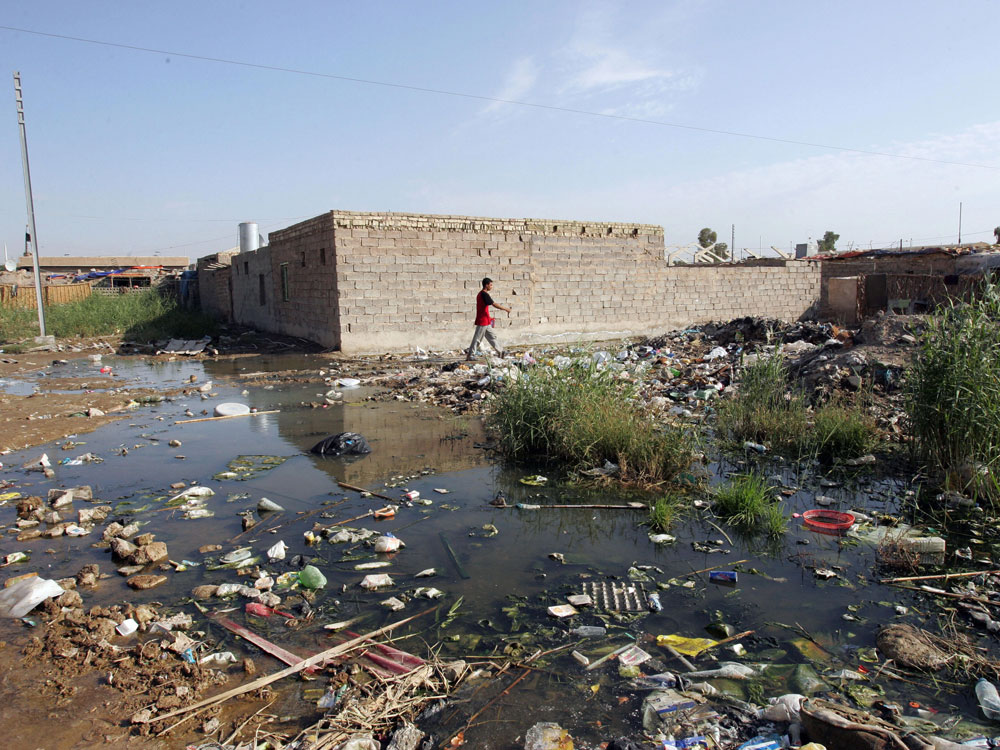 An Iraqi man walks past sewage and rubbish in a squatter camp in Baghdad in 2008.

In Iraq, about 2 million people have been displaced by the war and sectarian fighting. Aid groups estimate that nearly 500,000 of them are living in cities and towns as squatters.

U.N. officials say the Iraqi government and aid agencies are only now recognizing the magnitude of the problem. Some refugees have returned to find their homes occupied. Others were forced to flee violence as tensions between Sunni and Shiite Muslims erupted.

Um Sara and her family have moved five times in four years. Each time, her situation gets worse. Her Shiite family originally lived in a Sunni neighborhood in Baghdad. But during the sectarian strife of 2007-07, slogans like, "This school is for Sunnis" began to appear on walls, and the bodies starting piling up.

It's a phenomenon that was not known to many people — even the government.

Shoko Shimozawa with the U.N. High Commissioner for Refugees on the issue of squatters in Iraq

The family fled and moved in with relatives, and later rented apartments in Shiite neighborhoods. Then the father and oldest daughter got sick, and they couldn't pay the rent.

Now, Um Sara, her ailing husband and four children live on the first floor of an abandoned office building. Raw sewage drains into the courtyard and her family and visitors have no choice but to walk through it to get into their makeshift home. Inside, it is totally dark because there is no electricity.

"Look," Um Sara says, waving her hands in disgust. "We have nothing."

More than half of Iraq's 500,000 squatters are in Baghdad, says Shoko Shimozawa with the U.N. High Commissioner for Refugees. She says the number of squatters is increasing because people like Um Sara are finding it harder to make ends meet and aid groups and officials are only now looking for -- and finding -- the displaced people.

"It's a phenomenon that was not known to many people -- even the government," Shimozawa says. "When we tried to explain the issue, some government officials [then] know for the first time of the magnitude of the problem," Shimozawa adds.

Iraq's Minister of Displacement, Abdul Samad Rahman Sultan, says even though he feels sympathy for squatters, they can't go on living illegally. 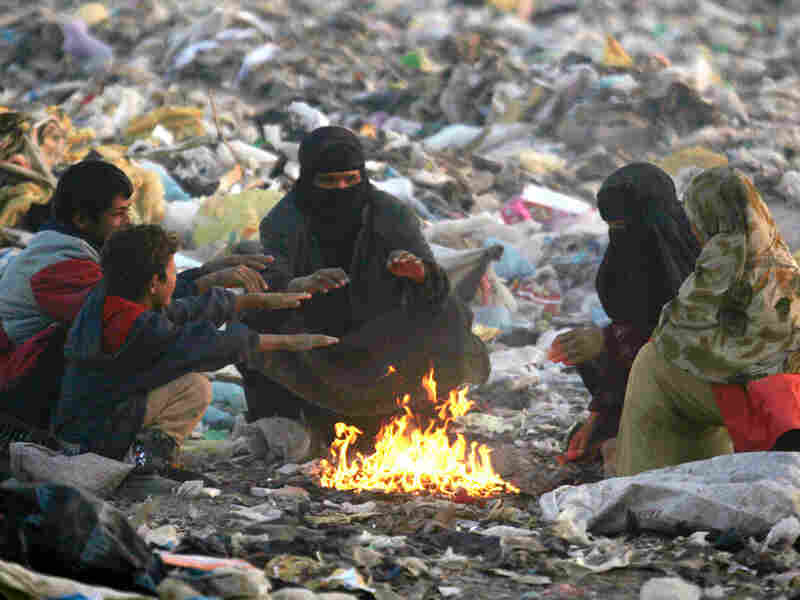 Iraqis sit next to a fire at a dump near Najaf, 100 miles south of Baghdad. In 2008, about 150 people, mainly displaced from other part of Iraq, were living here and trying to make a living by selling recyclable materials Alaa al-Marjani/AP hide caption 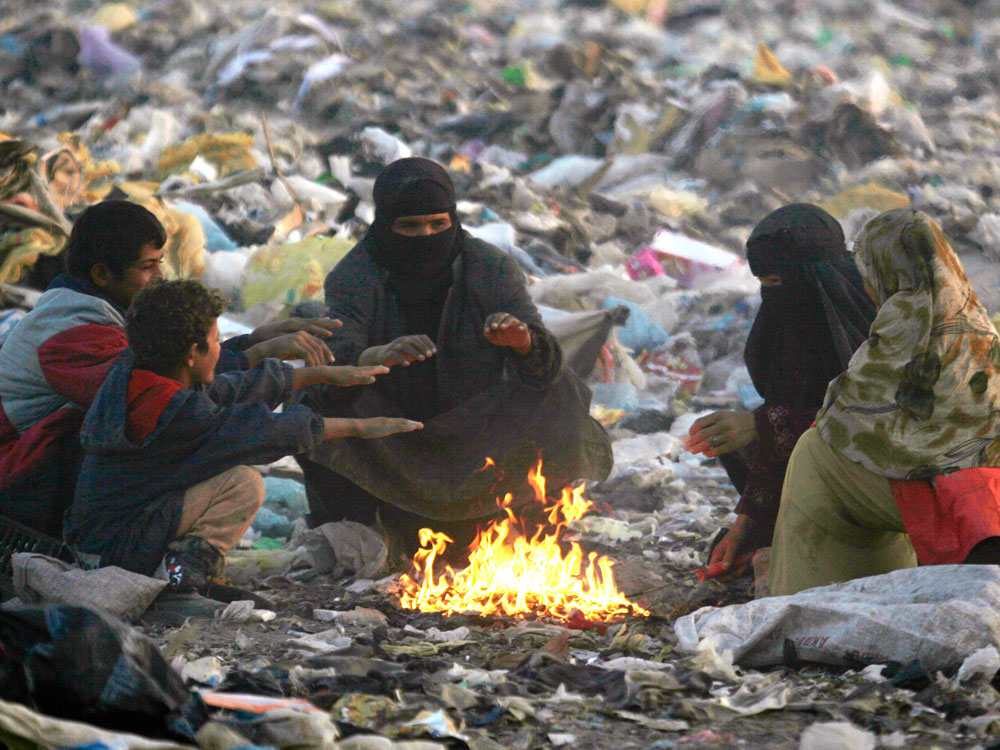 Iraqis sit next to a fire at a dump near Najaf, 100 miles south of Baghdad. In 2008, about 150 people, mainly displaced from other part of Iraq, were living here and trying to make a living by selling recyclable materials

"These people can't occupy property that doesn't belong to them," he says. "If we let them stay, it only means more people will try to do the same."

The only way squatters can register for government assistance is if they want to return to their original homes. But most people are still afraid to do that. Those who begin the process of seeking government help often face corrupt local officials who ask for bribes or sell relief packets for profit.

Kelly Clements of the State Department's Bureau of Population, Refugees and Migration says that is why the U.S. government doesn't give refugee aid money directly to the Iraqi government. Instead, the aid is funneled through the U.N. and other international aid agencies.

The State Department is ramping up its support as the U.S. military's presence in Iraq winds down, Clements says.

"Last year we provided close to $400 million. We're going to provide similar levels this year," Clements says. "What we're concerned about is the vulnerable, female-headed households, those that don't have other means."

The aid money helps provide squatters with stoves, fans and mattresses. In the long-term, aid providers hope to work with the Iraqi government to help squatters build new homes.

A Measure Of Iraq's Recovery

Elizabeth Campbell of Refugees International based in Washington, D.C., recently visited squatter camps around Iraq. She says resettling the displaced is the only way the country will be able to recover from the U.S. invasion and the resulting civil war.

"In many ways, displacement is the lens through which you can measure progress and success. And as long as communities are disenfranchised, impoverished, ignored, forgotten, problems will continue to fester and it can certainly lead to a wide variety of social and political problems down the road," Campbell says.

In Diyala province east of Baghdad, the Minhel family has been squatting in a mud-brick room on government land since the war began in 2003. They fled their home during ethnic tension between Arabs and Kurds.

The mother rifles through her purse and finds a letter from an American lieutenant colonel. Whenever local officials try to evict the family, she shows them the letter, which reads: "In accordance with the directives from Lt. Col. Grant, displaced civilians are not to be relocated or moved without prior coordination from this office." The letter is dated Aug. 5, 2003.

The mother says she knows the letter might not work much longer.

"If the soldiers can't help us anymore," she says, "who can?"