Accessibility links
Islamic Center Near Ground Zero Sparks Anger Emotions are running high around a proposed Islamic cultural center and mosque two blocks from the destroyed World Trade Center. Plans for the Islamic center are supported by most politicians in Manhattan and by religious leaders of many faiths. But some Sept. 11 families and many conservative politicians are opposed. 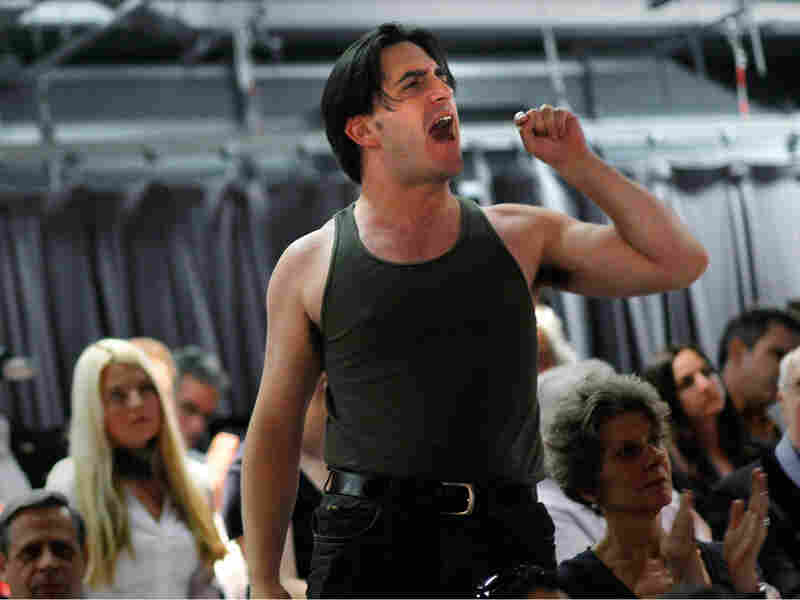 An opponent of a proposed Islamic cultural center near Ground Zero shouts his opposition during a community board meeting in lower Manhattan in May. Chris Hondros/Getty Images hide caption 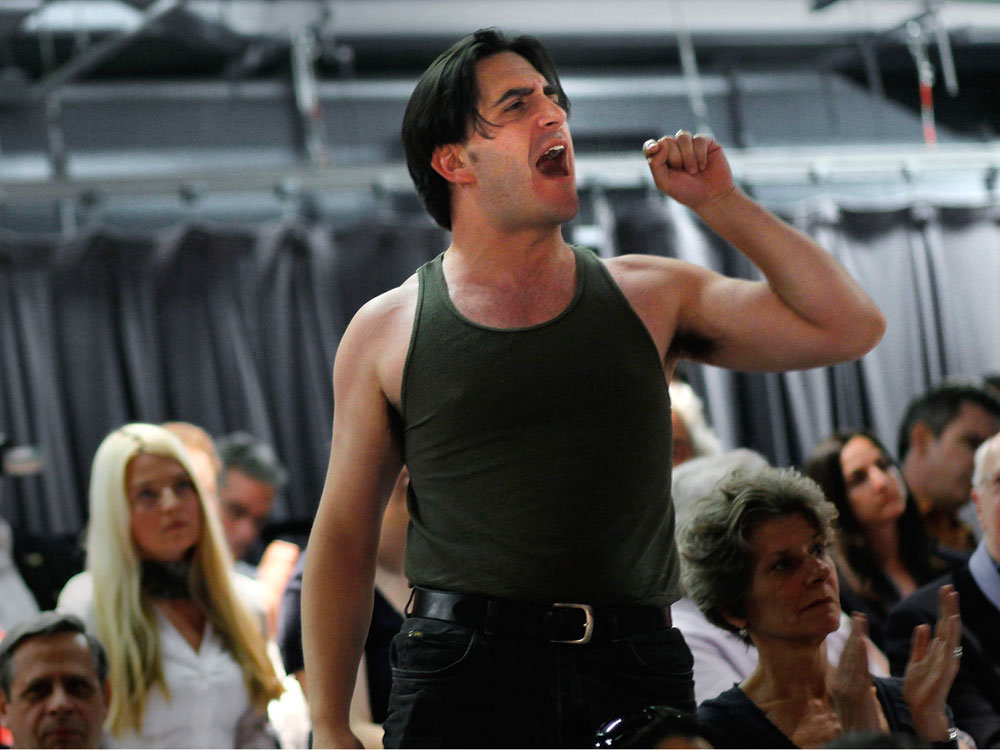 An opponent of a proposed Islamic cultural center near Ground Zero shouts his opposition during a community board meeting in lower Manhattan in May.

A proposed Islamic cultural center and mosque two blocks from the site of the destroyed World Trade Center has become a flash point of controversy.

The plan for Cordoba House has been in the works for a number of years. It is to be built on the site of the old Burlington Coat Factory store on Park Place, just about two blocks from ground zero.

The Islamic center is supported by most politicians in Manhattan and by religious leaders of many faiths. It is opposed by some Sept. 11 families, by conservative politicians, bloggers and Tea Party activists.

In the last weeks, meetings have been raucous, tensions growing and emotions raw.

The plan for Cordoba House -- which those who oppose it call a mosque, and those who support it call a cultural center with a place for prayer -- has been the dream of Imam Feisel Abdul Rauf and his wife Daisy Khan. Khan describes it somewhat like the Jewish Community Center uptown, with facilities for athletics, arts, performances, lectures series, forums and weddings, as well as a prayer space.

Imam Feisel Abdul Rauf considers himself an orthodox Muslim, but he is also a Sufi, a contemplative and mystical path in Islam. The offices of the Imam and his wife are in a building used by many faiths that is part of Riverside Church in upper Manhattan, a liberal bastion of interfaith work. When you listen to Khan speak, she sounds very much in that tradition.

This center will create this kind of counter momentum which will amplify the voices of the moderate Muslims. If we have to defeat the extremists, Muslims have to be leading that effort.

"Our religion has been hijacked by the extremists," she says. "This center will create this kind of counter momentum which will amplify the voices of the moderate Muslims. If we have to defeat the extremists, Muslims have to be leading that effort."

Community Opposition To A Mosque

But at a landmark's commission meeting on Tuesday, the atmosphere was very different. Those opposed -- fully three-quarters of the speakers -- asked that the building be "landmarked" because of Sept. 11. Landmark status would mean the building could not be torn down, creating roadblocks for the new Islamic cultural center.

"The landing gear from one of the planes of the Sept. 11 attack crashed into that building," said Barbara Paolucci. "It should be a museum."

Sam Nunberg of the Center for Law and Justice said: "It would be like removing the sunken ship in Pearl Harbor to erect a memorial to the Japanese kamikazes killed in the attack."

And Andrea Quinn said: "To deprive this building of landmark status is to allow a citadel of Islamic supremacy to be erected in its place."

Speaking in support of the project, one man held up his American passport to prove his citizenship. Zead Ramadan, a Muslim who said his wife and brother were first responders after Sept. 11, said a lot of the rhetoric was simply Islamophobia. He was shouted down.

Mayor Michael Bloomberg supports the center. The community board for lower Manhattan voted to support the project 29 to 1.

Funding For The Mosque

In the race for New York governor, Republican candidate Rick Lazio called on Attorney General Andrew Cuomo, his Democratic opponent, to investigate the project's funding, saying: "This is a time when we have to ask serious questions that will keep the people of New York and the people of downtown Manhattan feeling -- and actually being -- safe." 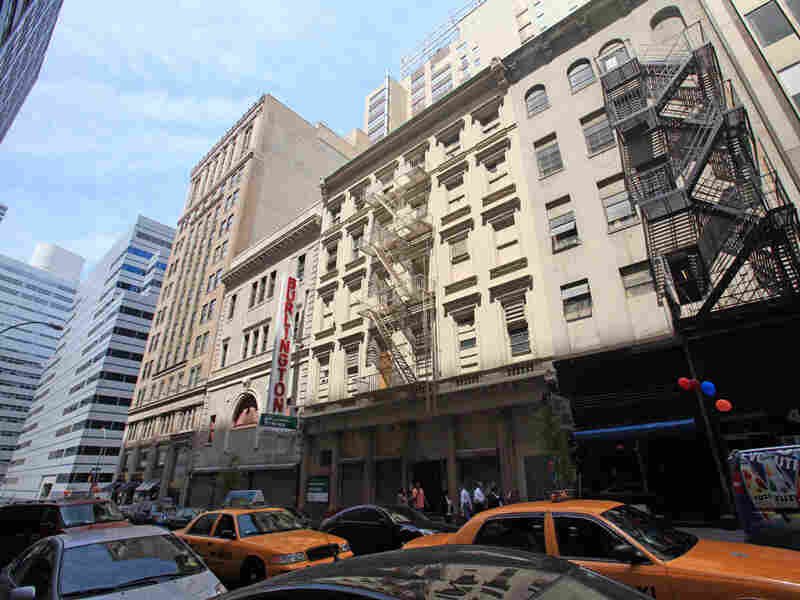 A 13-story mosque and Islamic cultural center planned to replace the building in lower Manhattan that once housed a Burlington Coat Factory store has created tensions. The building was damaged by airplane debris on Sept. 11, 2001. Mark Lennihan/AP hide caption 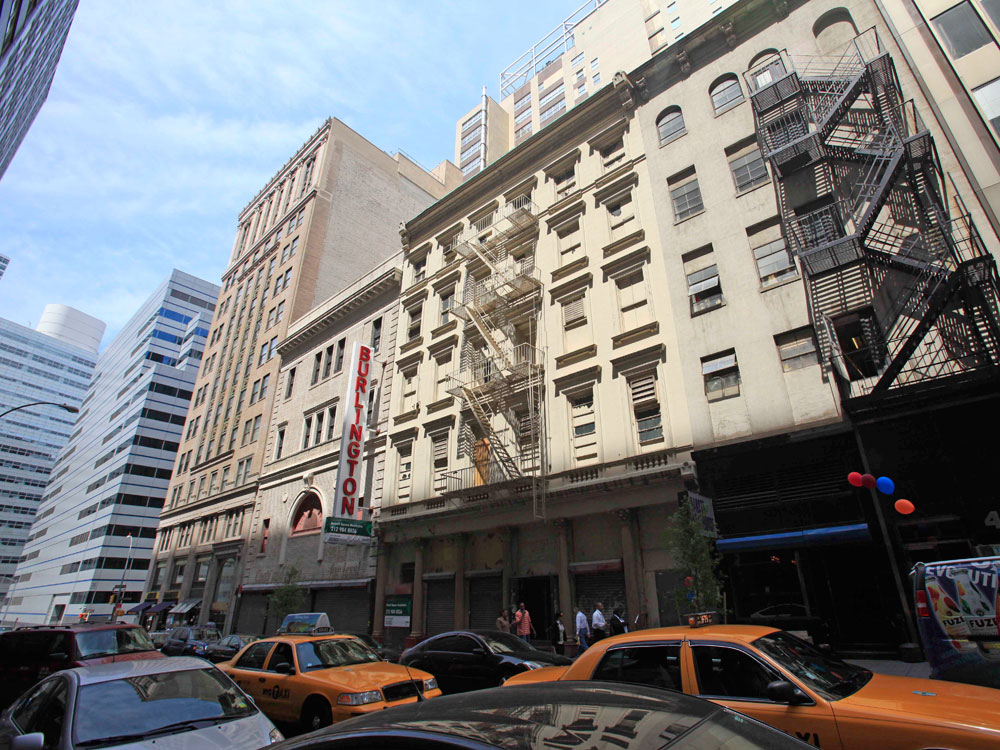 A 13-story mosque and Islamic cultural center planned to replace the building in lower Manhattan that once housed a Burlington Coat Factory store has created tensions. The building was damaged by airplane debris on Sept. 11, 2001.

His opponent, Cuomo, said he understood that some people were upset, but that, "The flipside and what Mayor Bloomberg has said is that we also believe in the concept of freedom of religion and independence of religion where the government does not say what religions can be where."

Imam Rauf and Khan have not been totally forthcoming about funding, but Khan told NPR on Tuesday that they are forming a new non-profit, and that fundraising won't really start until after the landmarks commission rules.

'America Works Because Of Religious Freedom'

A recent poll on the question of the mosque showed that 52 percent of New York City residents opposed the center. In more liberal Manhattan, 46 percent of residents approved it and 36 percent were opposed.

Maurice Carroll of the Quinnipiac poll says the most noteworthy statistic is that while 55 percent of New Yorkers say Islam is a peaceful religion, "22 percent say that it encourages violence. They would not say that about Jews or Catholics, or Protestants and the explanation of that has to be that the terrorists have poisoned people's minds."

But the memories of the Sept. 11 terrorist attacks are being fueled by all kinds of bloggers and activists, many of whom don't live downtown. There's even a new TV ad against the mosque, put out by the National Republican Trust Pac.

Meanwhile, Khan finds herself somewhat shocked at everything that is going on.

Reacting to the charge that people say she is trying to bring Muslim extremist law to the U.S., Khan replied: "Muslims pray, they fast, they give charity. Most American Muslims don't want to do anything that violates American law. America works because of its religious freedom and because it doesn't allow one religion to dominate another and we are very happy as Muslims with that arrangement."

But clearly some others are not. The controversy doesn't show signs of letting up. But except for the landmarks question, the project has been approved, and even if Cordoba House stays within the existing building, it's hard to believe the project can be stopped.