Accessibility links
BP: New Cap Has Stopped Flow Of Gulf Oil Company officials say the cap is keeping oil from gushing for the first time since April -- the most significant milestone yet in BP's effort to control the biggest oil spill in U.S. history. Engineers dialed down the flow to test the cap and are monitoring the pressure to see if the broken well holds. 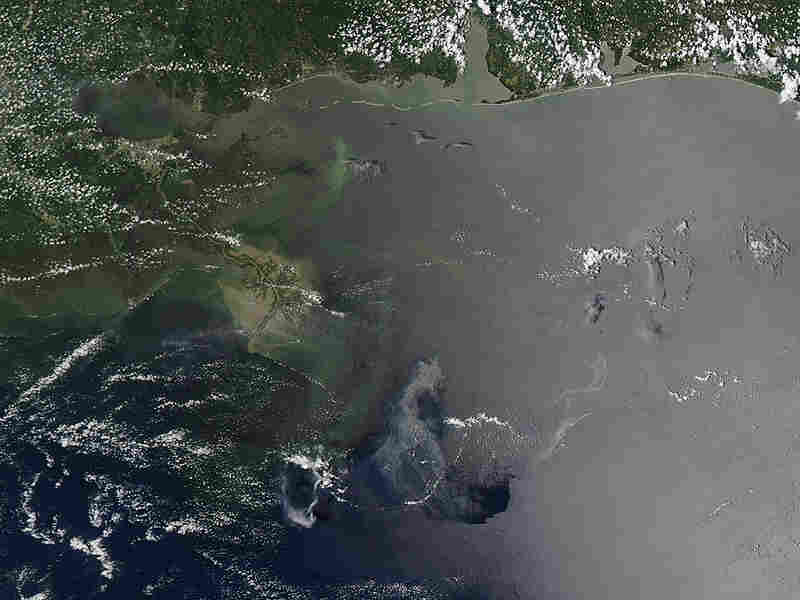 A satellite image taken Thursday shows the oil that has permeated the Gulf of Mexico. NASA via Getty Images hide caption 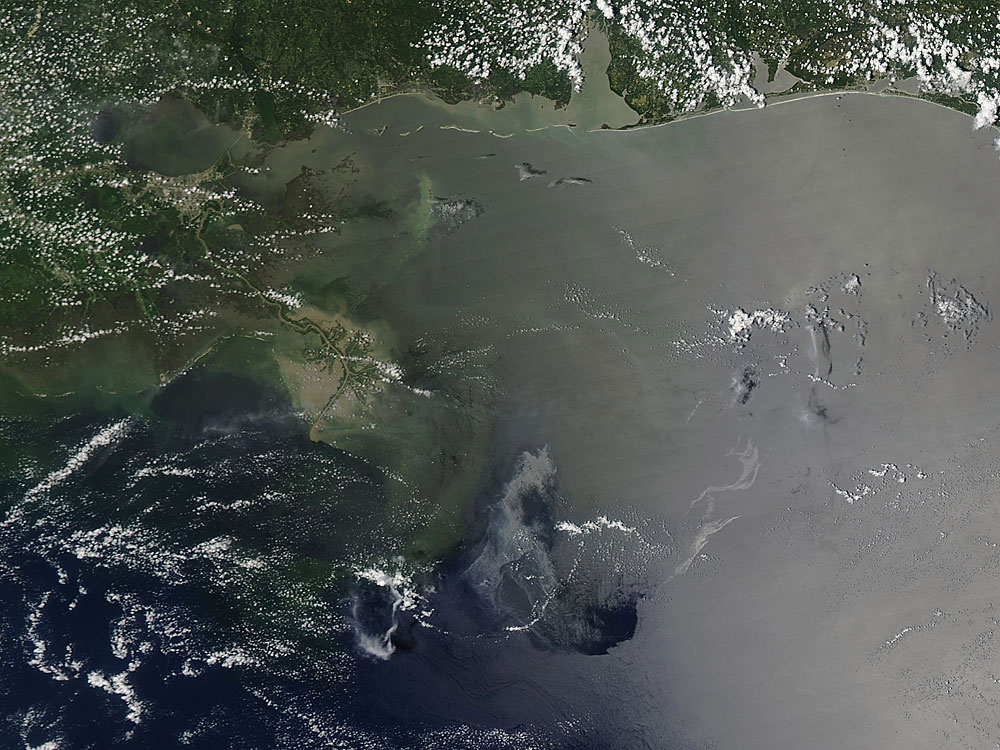 A satellite image taken Thursday shows the oil that has permeated the Gulf of Mexico.

BP says a new cap has stopped oil from leaking into the Gulf of Mexico for the first time since April.

The energy giant has been slowly dialing down the flow as part of a test on a new cap, and engineers are now monitoring the pressure to see if the broken well holds.

"The test is looking at the condition of the well under the sea and if it turns out that the well is in good shape, this could well be the beginning of the end of the Deepwater Horizon catastrophe," NPR's Richard Harris said.

Engineers got to work after replacing a leaky pipe. Kent Wells, a BP PLC vice president, said at a news briefing in Houston that the leak was found on the side of the towering, 75-ton capping stack and it was fixed by replacing the assembly, called a "choke line."

BP Says Cap Has Stopped Flow Of Oil Into Gulf

The work sent the oil giant back to restarting preparations for testing whether the cap can stop the oil without blowing a new leak in the well. If it works, the cap will be a temporary fix until BP can drill into the gusher to plug it for good from underground, where the seal will hold better.

"If the well is leaking, then they have to open the valves again and they have to let the oil out again," Harris told NPR's Robert Siegel. "But if it's not, they can just leave these valves closed and this is the end of the spill essentially for right now."

"We're encouraged by this development, but this isn't over," he said in a statement. "Over the next several hours we will continue to collect data and work with the federal science team to analyze this information and perform additional seismic mapping runs in the hopes of gaining a better understanding on the condition of the well bore and options for temporary shut in of the well during a hurricane." 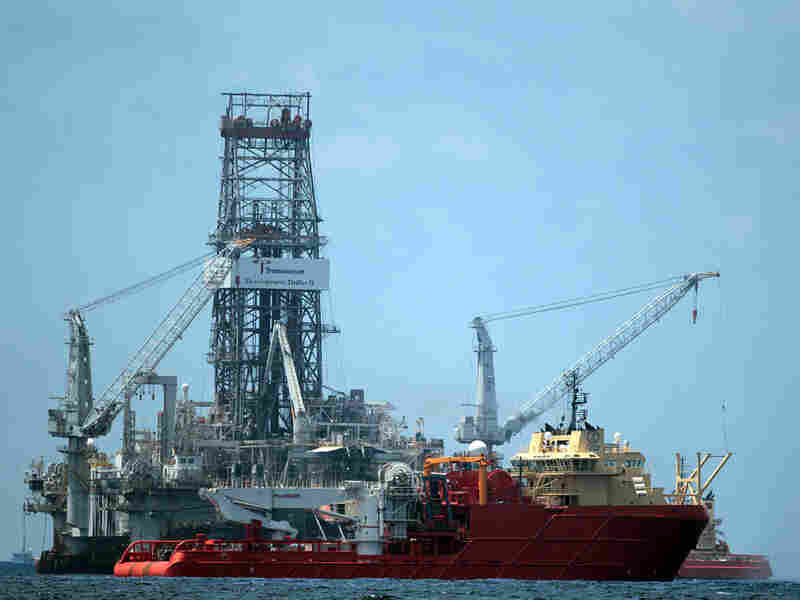 Vessels operate in the area of the Deepwater Horizon oil spill in the Gulf of Mexico, where BP says the flow has been stopped for the first time in months. Dave Martin/AP hide caption 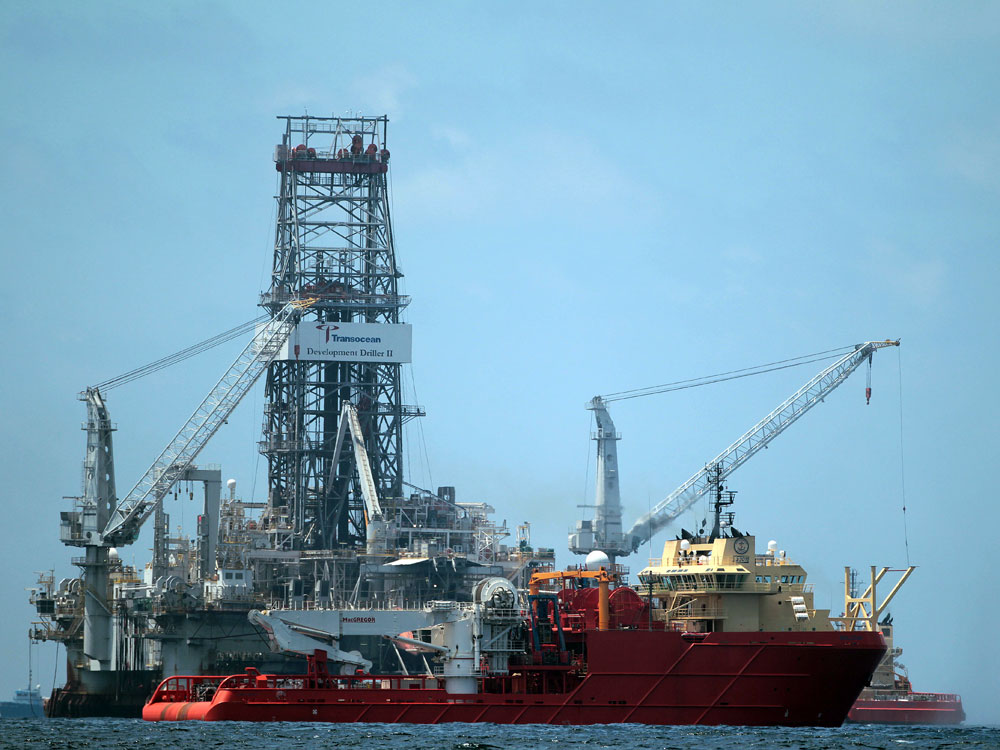 Vessels operate in the area of the Deepwater Horizon oil spill in the Gulf of Mexico, where BP says the flow has been stopped for the first time in months.

At an earlier briefing, Allen said the cap remains a temporary fix until one of two relief wells BP is drilling can reach the gusher underground and plug it permanently with heavy drilling mud and cement.

The test involves closing off all three openings in the cap to the Gulf. BP will be monitoring pressure under the cap. High pressure is good, because it shows there's only a single leak. Low pressure, below 6,000 pounds per square inch or so, could mean more leaks farther down in the well.

BP expects to keep the oil trapped in the cap for 48 hours before it decides if the approach is working.

The government estimates 1.5 million to 2.5 million gallons are leaking every day.

Meanwhile, with the disaster nearly three months old, the man in charge of the $20 billion fund set up by BP to pay individuals and business for their losses said it will start making payments in early August.

Ken Feinberg, who was in charge of the compensation paid to families of victims in the Sept. 11 terrorists attacks, told a meeting of government officials in Louisiana that he expected a seamless transition from BP management of claims to his administration.

As of Thursday, the 86th day of the disaster, between 93.5 million and 184.3 million gallons of oil had spewed into the Gulf since the Deepwater Horizon rig leased by BP exploded April 20, killing 11 workers.