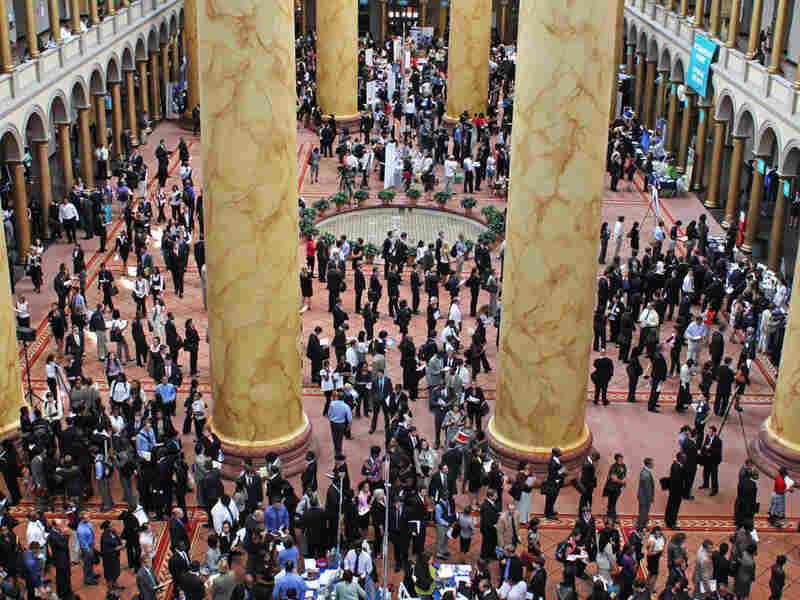 Thousands of job seekers line up at the National Building Museum during the Public Service Career and Internship fair in Washington, D.C., on Wednesday. The federal government needs to fill an estimated 50,000 entry-level jobs in the next year. Yanina Manolova/NPR hide caption 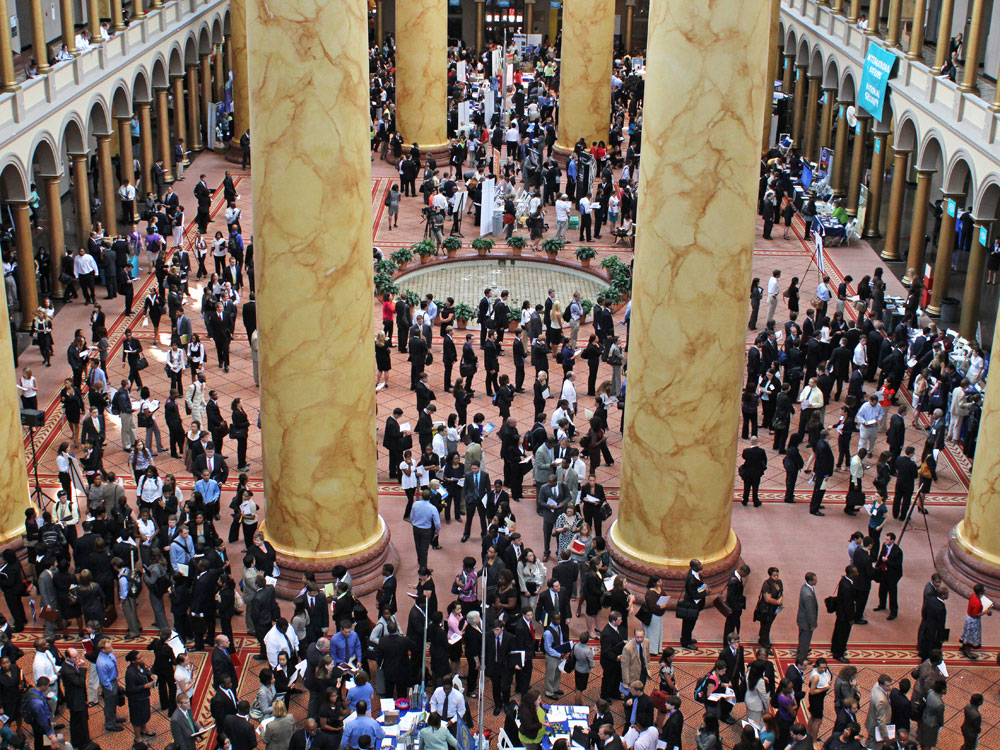 Thousands of job seekers line up at the National Building Museum during the Public Service Career and Internship fair in Washington, D.C., on Wednesday. The federal government needs to fill an estimated 50,000 entry-level jobs in the next year.

More than 7,000 people registered for the federal job fair organized by the nonprofit Partnership for Public Service. Recruiters representing 85 federal agencies, from the FBI to the Social Security Administration, were on hand to talk to potential new hires about entry-level positions.

Applying for a job with Uncle Sam is notoriously time-consuming and tedious. Federal agencies can get thousands of applications for each position. Read tips on how to navigate the process.

With a 9.5 percent unemployment rate reported in June, there aren't a lot of job opportunities for recent graduates. But the federal government is looking to fill an estimated 50,000 entry-level positions in the next year, according to the Partnership for Public Service, and public sector work is looking better and better to some people as private sector job growth remains anemic.

'You Just Have To Keep Going'

Carolyn Basalla waited in line to talk to a recruiter at the CIA booth for more than 45 minutes. Getting to the job fair took what she calls equal parts dedication and desperation. She heard about the fair just a few days earlier and bought a last-minute plane ticket to get there from Arizona. She flew overnight for 12 hours, changing planes three times.

"I hate the job search," Basalla, 22, says. "It's incredibly frustrating and incredibly time-consuming, and you just have to keep going and hope that it ends well."

Basalla graduated from the University of Arizona in December, and she's applied for about 70 government jobs since spring. She wants to use her background in Middle Eastern studies to work in intelligence.

A solid salary and great benefits lure her to the public sector, but Basalla says the real draw is her passion for government work. She says she knows not everyone at the job fair has the same motivations -- they're attending because in this economy, a good job is a good job. It's understandable, she says, but still annoying. 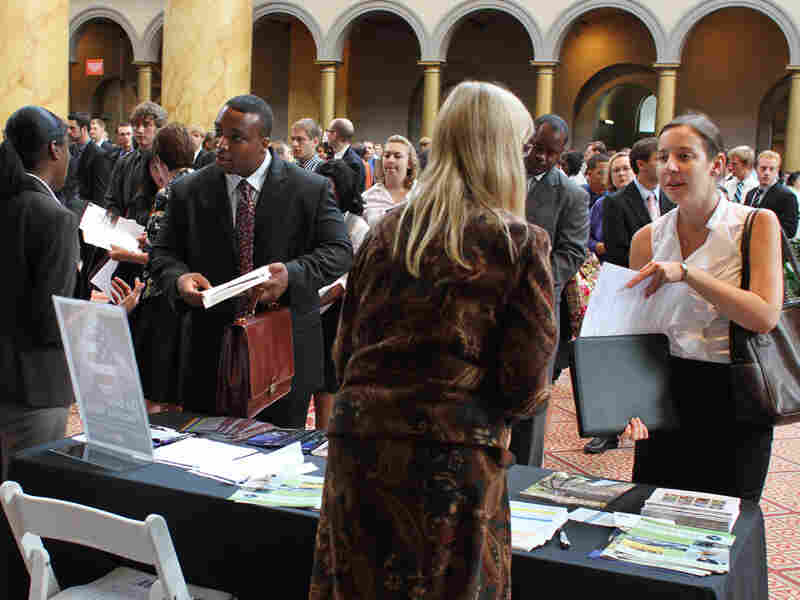 Jonathan Wallace (left) and Nicole King (right) give their resumes to recruiters at a federal job fair in Washington, D.C., on Wednesday. Recruiters from 85 federal agencies set up tables at the National Building Museum to meet thousands of young job seekers for entry-level jobs. Yanina Manolova/NPR hide caption 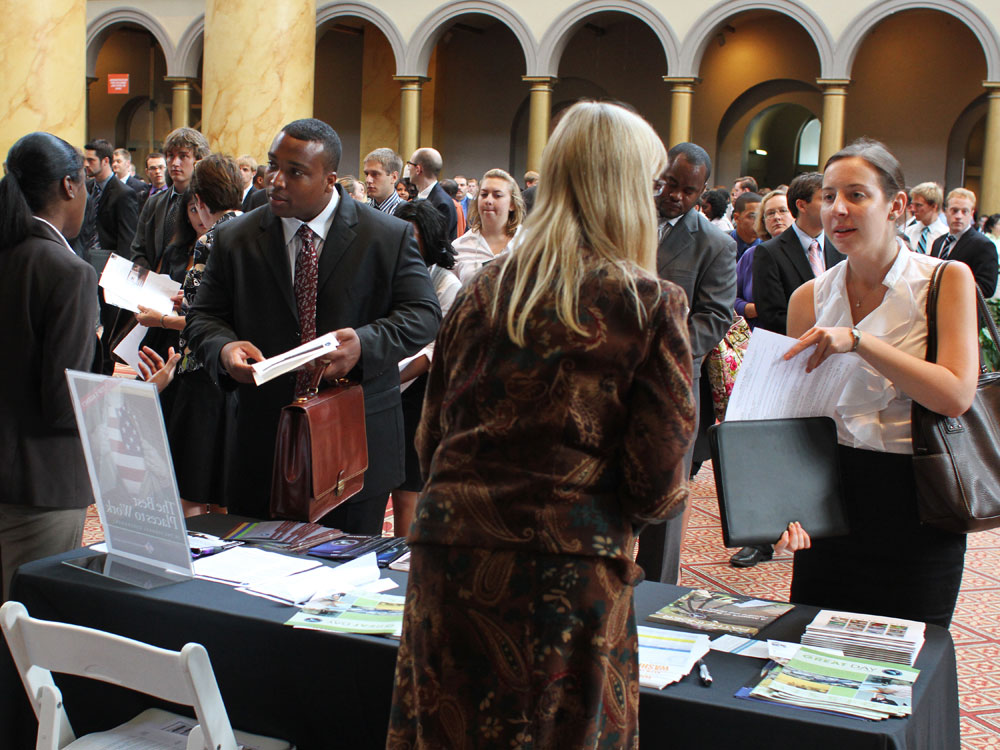 Jonathan Wallace (left) and Nicole King (right) give their resumes to recruiters at a federal job fair in Washington, D.C., on Wednesday. Recruiters from 85 federal agencies set up tables at the National Building Museum to meet thousands of young job seekers for entry-level jobs.

"It's frustrating," Basalla says. "It just increases the number of candidates you have to compete with exponentially."

Tajh Glenn, 21, visited the booths for the Environmental Protection Agency and the Postal Service. His goals aren't as specific as Basalla's.

There was a time when recent grads looked to Wall Street to land jobs with big bonuses. But today, a regular paycheck is looking more and more tempting. Max Stier, the head of the Partnership for Public Service, says there were at least 1,000 more job seekers at the fair this year than last year. Part of the reason for that, he says, is the stability that government work provides.

Most federal workers feel a sense of personal accomplishment, like their jobs and think they're important, according to a new survey conducted by the Office of Personnel Management. Read the survey results.

Entry-level hiring in the federal government has been steadily increasing over the past five years as the oldest baby boomers begin to retire. The government hired almost 20,000 more people for entry-level positions in 2009 than it did in 2005.

"The government has the oldest workforce of any sector and therefore will experience the baby boom retirement wave earlier and faster than any of the other sectors," Stier says.

As job openings increase, though, so will applications. The online process for applying for a federal job is being revamped -- by November at the latest, time-consuming essays will no longer be required. And that's expected to increase application numbers even more.

The changes, requested by President Obama, will give the government a larger pool of applicants to choose from, but for people like Basalla, it will also increase competition for that dream job.

Tips For Landing A Federal Job

Applying for a job with Uncle Sam is notoriously time-consuming and tedious. Federal agencies can get thousands of applications for each position. A few tips on how to navigate the process:

Use "buzzwords." Many federal agencies use computers to sort through first-round applications. They look for each agency's "buzzwords" in your resume, cover letter, and essays — so make sure you include them. On USAjobs.gov the government's job application portal, look at the "duties" section for the job you're applying for. Pick out the words, like "research" or "communication" that are used frequently, and sprinkle them throughout your application materials. Don't try to get creative — the computer won't pick up on synonyms, so use the exact words listed in the position description.

Visit each agency's website. USAjobs.gov lists many of the openings for federal government jobs, but not all of them. If you know you want to work for a specific agency, check the jobs section of that website as well.

Don't rely on the Web alone to get you a job.The online application process is important, but just as in private sector jobs, attending job fairs and networking is too.

Show your enthusiasm for public service. Read the agency's mission statement and craft your application to show that your goals are in line with their stated mission.

Don't get discouraged — the process is getting easier. President Obama told government agencies to streamline their application processes, and they're responding. By November, KSA's, the dreaded Knowledge, Skills and Abilities essays, won't be allowed in first-round applications; for some jobs, only a resume will be required at the beginning. The hiring process is also speeding up, and government agencies will be required to provide more feedback to applicants throughout the process.