Accessibility links
Senate Passes Sweeping Financial Overhaul Bill President Obama and the Democrats scored another major legislative victory Thursday. The Senate passed a broad bill to overhaul financial regulations. The measure rewrites the rules for Wall Street to try to avoid crises like the 2008 economic meltdown. This time the Democrats got a little help from Republicans.

President Obama and the Democrats scored another major legislative victory Thursday. The Senate passed a broad bill to overhaul financial regulations. The measure rewrites the rules for Wall Street to try to avoid crises like the 2008 economic meltdown. This time the Democrats got a little help from Republicans.

Today, a major victory for President Obama and Democrats. The Senate cleared a far-reaching bill to overhaul the financial regulatory system, sending it to the president for his signature. The measure rewrites the rules for Wall Street in hopes of preventing the kinds of problems that led to the 2008 financial crisis. And unlike the health care debate, this time, Senate Democrats got a little help from their Republican friends.

AUDIE CORNISH: Nearly two years ago, lawmakers were wringing their hands over a financial system on the verge of collapse, and a request for $700 billion needed to save it.

Today, Senate Majority Leader Harry Reid hailed the passage of a financial regulatory bill as the end of taxpayer-funded rescues.

Senator HARRY REID (Democrat, Nevada; Senate Majority Leader): No more bailouts, because no bank is too big to fail. Were going to give consumers and investors the strongest protections theyve ever had.

CORNISH: The final votes were not even in when consumer advocates like Heather Booth of Americans for Financial Reform joined Democrats in their victory lap.

Ms. HEATHER BOOTH (Executive Director, Americans for Financial Reform): Finally, we are almost at a victory for Main Street and not just for Wall Street and the biggest banks.

CORNISH: Three Republicans helped the Democrats move the bill along. Tennessee Senator Bob Corker - at one point a top negotiator - was not one of them. He says the bill veered too far to the left.

Senator BOB CORKER (Republican, Tennessee): I think they've miscalculated. I think that they thought going into this, like, we're going to create a bill that bashes Wall Street and all the Americans are going to love us. And we're going to do it along partisan lines, and Republicans aren't going to be involved and that's going to be great.

I think what Americans are looking for is the two parties in this country addressing the core issues that are affecting the country. And that bill - this bill doesn't do that.

CORNISH: The final version includes provisions that many thought would not survive, such as the new consumer protection bureau which is supposed to fight abusive practices and consumer products such as mortgages and credit cards. Republicans called the proposed agency an unnecessary addition to the current alphabet soup of regulators: the Fed, the FCC, the CFTC, FDIC and more.

Senator RICHARD SHELBY (Republican, Alabama): All the Democrats will succeed in doing with the help of a few Republicans is give the failed bureaucracies more power, more money and a pat on the back with the hope that they will do a better job next time.

CORNISH: Despite the outcry about failed regulators, the bill's architects managed to cut just one, the Office of Thrift Supervision. The remaining regulators will form a council with new power to ferret out risky activity and shorten the regulatory leash on financial firms it considers too big to fail.

CORNISH: Under the legislation, giant financial institutions could be made to draw up a living will of sorts so regulators could avoid chaos and liquidate them quickly. The bill puts so much emphasis on reports and studies that banking lobbyists like Rob Nichols of the Financial Services Forum are already focusing on what comes after the bill is signed.

Mr. ROBERT S. NICHOLS (President and Chief Operating Officer, Financial Services Forum): A good analogy is that there's, you know, we have the frame of the house in place. We know where the kitchen is, we know where the bathroom is, but we don't yet know the color of the tile in the bathroom. And that's going to be the regulatory process.

CORNISH: So this isn't over. Many of those decisions could be right back before Congress in one way or another, as regulators draw up the new rules. 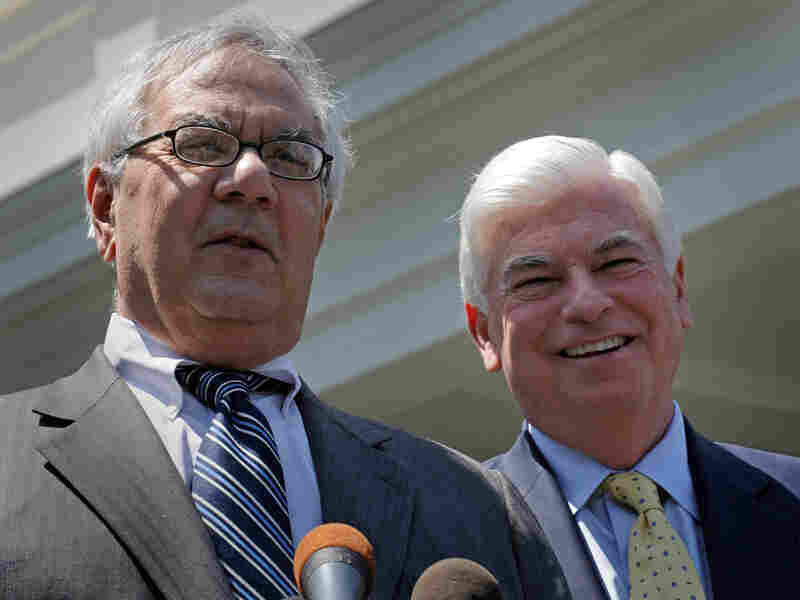 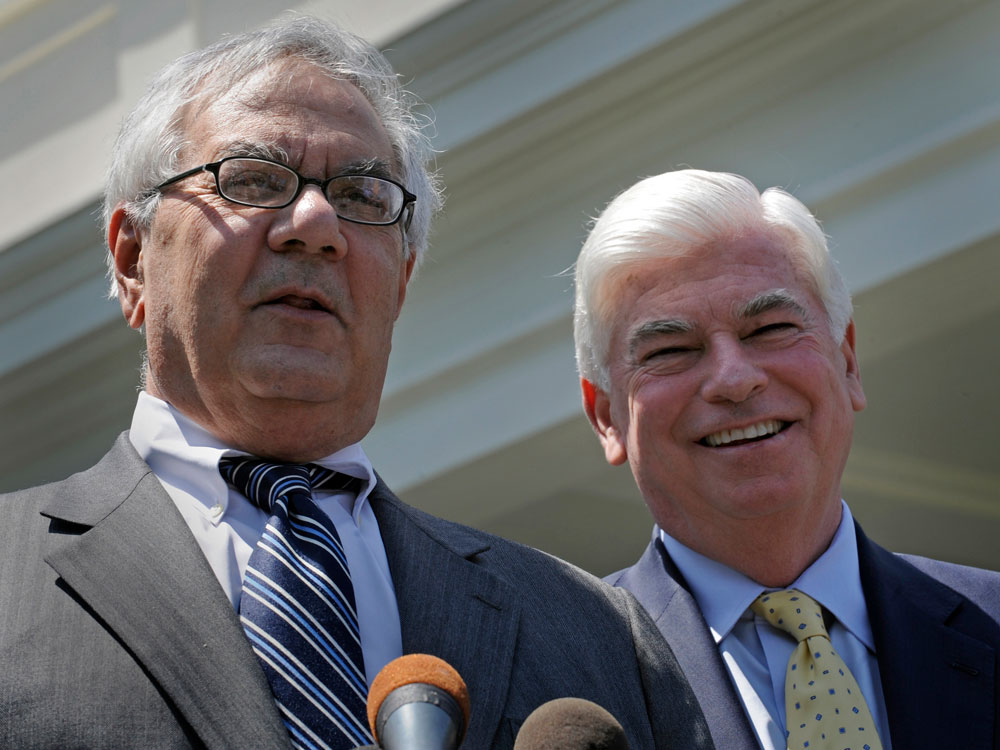 The financial legislation is named after Senate Banking Chairman Christopher Dodd (right) and House Financial Services Chairman Barney Frank, seen outside the White House on May 21.

The Senate approved a sweeping bank regulation bill Thursday, sending President Obama a crackdown on banks and Wall Street that in some ways is tougher than what he sought. The measure passed by a vote of 60-39.

At a thud-inducing 2,300 pages, the legislation is designed to rein in big banks and protect consumers, with the aim of averting a repeat of the 2008 financial crisis. Its ultimate impact, however, will depend on the government regulators assigned to implement it.

The legislation is the result of a year's worth of partisan struggles and delicate cross-party courtships that at times promised more votes but in the end delivered barely enough.

Named after Senate Banking Committee Chairman Christopher Dodd and House Financial Services Committee Chairman Barney Frank, the legislation ends a trend to ease regulations and instead clamps down on the financial industry in ways unseen since the Great Depression.

"Wall Street rigged the game," Senate Majority Leader Harry Reid said. "They put our money on the table. When they won, they won big. The jackpots they took home were in the billions. But when they lost and, boy did they lose big, they came crying to the taxpayers for help."

Three Republicans helped the Democrats move the bill along. Tennessee Sen. Bob Corker, at one point a top negotiator on the measure, was not one of them. He says the bill veered too far to the left.

"I think what Americans are looking for is the two parties in this country addressing the core issues that are affecting the country," Corker said. "And this bill doesn't do that."

Republicans cast the bill as vast government overreach, and were betting that the voters' antipathy toward big government and their worries over jobs would trump their anger at Wall Street.

"We're going to be driving jobs and business overseas with this massive piece of legislation," said Sen. Saxby Chambliss (R-Ga.)

And Sen. Richard Shelby (R-Ala.), who worked with Dodd on certain aspects of the bill, denounced it as a "legislative monster" and took special aim at the bill's creation of a new consumer financial protection bureau

"While a consumer protection agency may sound like a good idea," Shelby said, "the way it is constructed in this bill will slow economic growth and kill jobs by imposing massive new regulatory burdens on businesses."

The legislation has been an Obama priority, and in its final form it hews closely to the plan his administration unveiled a year ago.

But its political benefits in a heated midterm election year stand to be overshadowed by lingering high unemployment.

Speaking on the Senate floor Thursday, Dodd (D-Conn.) conceded that the bill's impact will not be evident immediately.

"It is not a perfect bill, I will be the first to admit that," he said. "It will take the next economic crisis, as certainly it will come, to determine whether or not the provisions of this bill will actually provide this generation or the next generation of regulators with the tools necessary to minimize the effects of that crisis."

Industry lobbyists fought feverishly against a number of restrictions in the bill, ultimately winning some concessions. In the end, the final bill was tougher than they wanted but not as restrictive as they feared.

Steve Bartlett, the president of the Financial Services Roundtable, a banking group, struck a conciliatory tone in a speech he was scheduled to deliver later Thursday.

"Core elements of the bill will contribute to a stronger, more secure financial system," he says in a text of the speech released in advance. "Some items in the legislation we did not support and we expressed our views accordingly. Nevertheless, we are committed to making those items work as well as possible."

But consumer advocates such as Heather Booth, executive director of Americans for Financial Reform, joined Democrats in their victory lap.

The bill puts so much emphasis on reports and studies that banking lobbyists such as Rob Nichols, president and CEO of the Financial Services Forum, are already focusing on what comes after the bill is signed.

The 2,300-page legislation, among other things:

- Gives the government new powers to break up teetering companies which, if allowed to fail, would threaten the economy.

- Creates a new agency to protect consumers in their financial transactions.

- Shines a light into shadowy financial markets that have escaped the oversight of regulators.

NPR's Audie Cornish contributed to this report, which includes material from The Associated Press