Accessibility links
Drinking Raw Milk Is Worth The Risk, Advocates Say Selling raw milk across state borders is banned because of the risk that it could be contaminated with dangerous bacteria. Some people insist on drinking it, however, and go out of their way to find it. They say it's more natural and more healthful, but scientists aren't convinced. 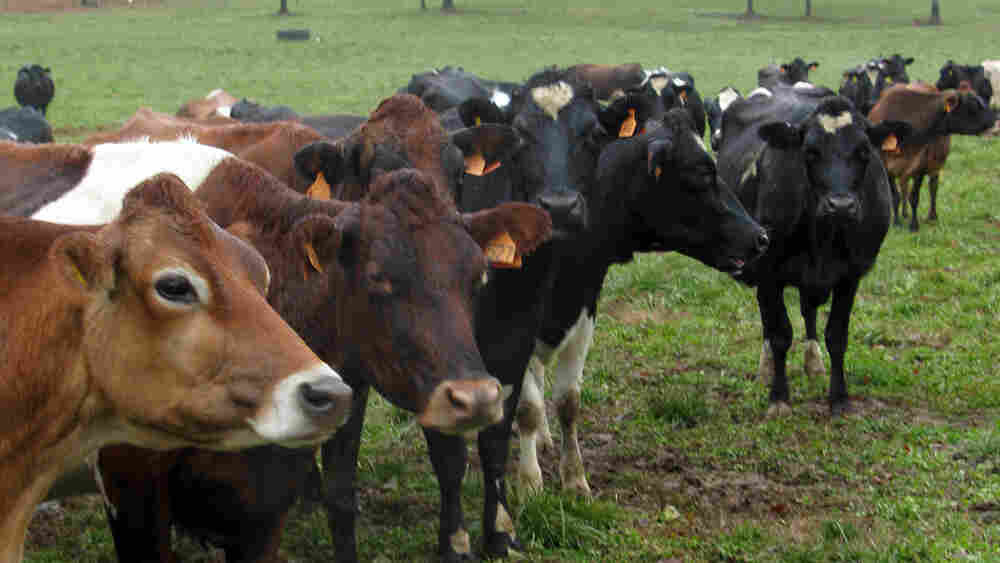 People who believe raw milk is better sometimes go to great lengths to get it. Some buy shares of a cow, and then drive to the dairy to pick up the milk. Allison Aubrey/NPR hide caption

Raw milk -- milk that comes straight from the cow or goat without being pasteurized -- has been effectively banned in many states because the Food and Drug Administration says it presents a health threat. But people who believe it's an important part of a diet with more local and natural foods are finding ways to get it, and they say it's worth the risk.

At 3 in the afternoon on a sweltering summer day in Bowie, Md., the Reitzig kids are ready for their snack.

Stay-at-home mom Liz Reitzig, 29, helps her youngest son, Duncan, who is almost 2, pour milk into his bowl of sliced peaches. His three older siblings chatter contentedly at the kitchen table, licking their bowls.

But because it's illegal to sell raw milk in Maryland, Duncan's milk is practically contraband. The milk isn't pasteurized, and it's hard to get. Reitzig drives more than two hours to farms in Pennsylvania for it, and pays $5 to $7 a gallon.

In other states where sales are banned, people buy shares of cows or goats raised on dairy farms, and then collect the milk from their animals at pre-established drop-off points.

The Birth Of Pasteurization 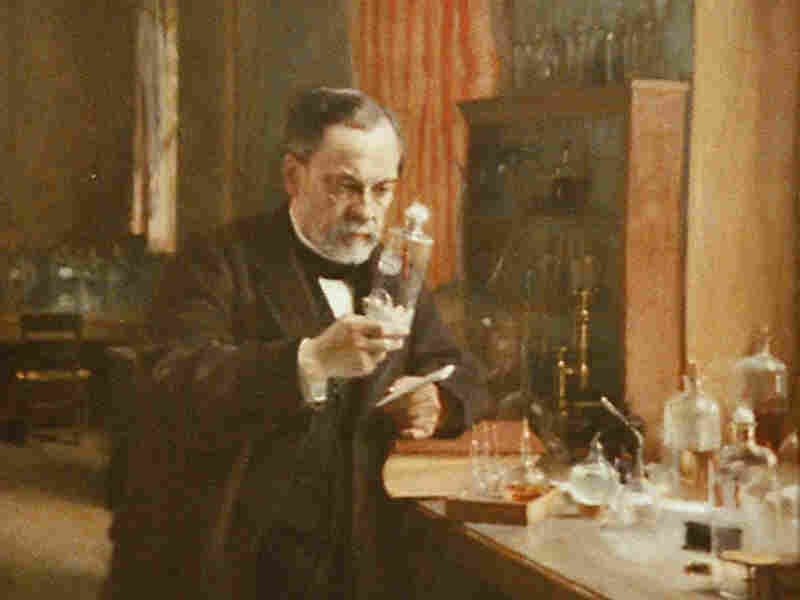 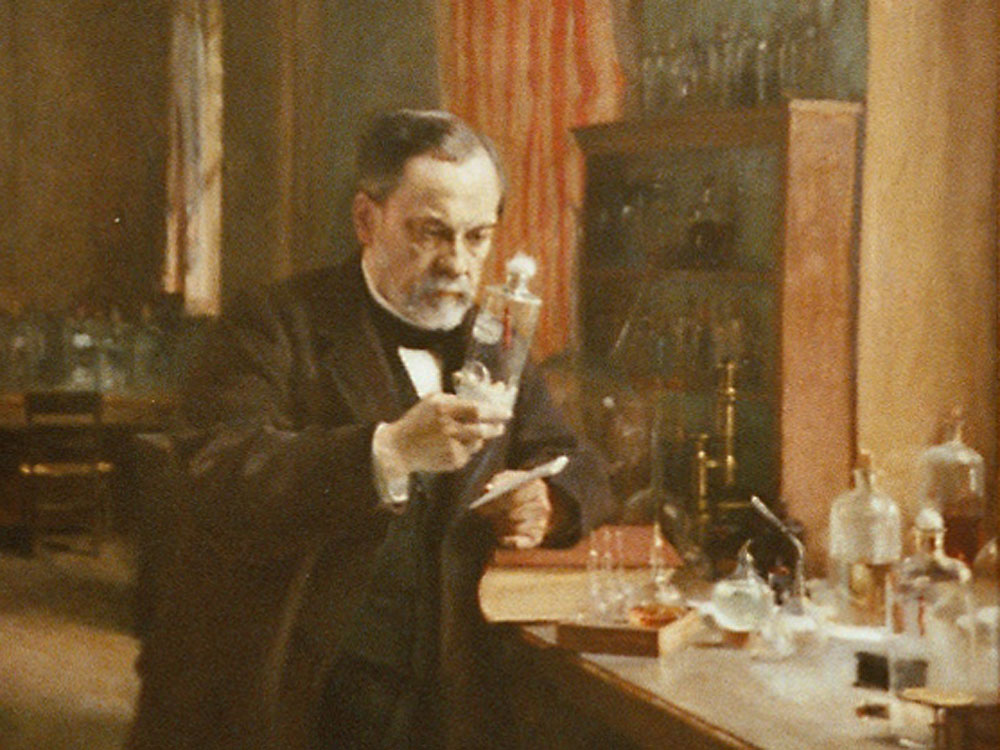 Louis Pasteur, a French chemist and microbiologist in the mid-1800s, loved beer, but not when it went sour.

He became curious about why it went bad, so after a little trial and error, he figured out that by heating beer to a high temperature, but below its boiling point, he could stop it from spoiling.

In Pasteur's day, many people believed illnesses were punishments for bad behavior or caused by an imbalance in the body's "humors." After Pasteur's experiments, people started realizing "stuff wasn't spoiling because of some mysterious aura around it, but it was due to these contagious 'bugs,' " says Scott Rankin, a professor in the department of food science at the University of Wisconsin.

Pasteur's experiments helped convince people that some diseases were indeed caused by tiny microorganisms like bacteria, which could be airborne or live in food or on our skin.

And slowly, scientists realized that Pasteur's method of heating beer could be applied to other foods to make them safer to consume. The process became known as pasteurization.

In the early 1900s, milk caused about 25 percent of all measurable food-borne illnesses. That's when it was discovered that milk was spreading some dangerous diseases, including tuberculosis, typhoid fever, diphtheria and streptococcal infections.

Tuberculosis was one of the bigger threats from milk, so researchers experimented with heating milk to different temperatures to figure out what it took to kill Mycobacterium tuberculosis. The news that scientists could kill TB germs in milk made the New York Times in 1922. Scientists used this information to set the early standards for milk pasteurization.

"Pasteurization started to get traction in the '20s and '30s, and it was adopted by more municipalities and large cities — so New York, Chicago," Rankin says. "And in the '40s and '50s is where the federal government started to come in and slowly embrace this idea that every milk entering into interstate commerce had better be pasteurized."

By the end of the 1940s, pasteurization had become the norm, and the practice had drastically cut down the spread of disease.

While TB is not such a big threat anymore, modern-day bugs like salmonella, campylobacter, listeria and E. coli O157:H7 lurking in milk are easily killed by pasteurization.

Today, food products like eggs, apple cider, canned food, juice, water and wine are pasteurized. But milk's standards are the highest. Only milk has a 400-page manual defining the steps.

"Well, I just think it's so silly. I can go out and get a six pack of beer anywhere and a carton of cigarettes," Reitzig says of the ban. If you're going to eat, you have to take risks, she says. Any food can be contaminated.

"Legally, I can feed my children fast food three meals a day. But then to get this incredible, nutrient-dense, fresh local food, the farmer in my state is criminalized for selling that to me," she says.

Her family started drinking raw milk about six years ago, after her second child was born. And she says the family has not had to make many trips to the doctor's office since; allergies have cleared up, and milk intolerances have gone away.

What Are the Dangers?

According to www.realrawmilkfacts.com, dairy products cause about 1 percent of food-borne outbreaks, and about 70 percent of those come from raw milk or raw cheese.

Raw milk can contain deadly bacteria like E. coli and salmonella and has sickened more than a thousand people since 1998. Recently, it was blamed for sickening 30 people in Colorado, including two children who were sent to the hospital.

So the Food and Drug Administration and many states require that most milk sold at a store be pasteurized -- a process that heats it to 161 degrees Fahrenheit to kill microbes.

And there's good reason for that, according to health officials.

"Raw milk is associated with significant human illness and potentially with microbes that are deadly," says David Acheson, a former chief of the FDA's food safety division.

He says the Reitzigs and others like them are taking a big risk.

Bacteria in an animal's fecal matter can come in contact with raw milk and contaminate it. That bacteria would almost certainly be killed if the milk was pasteurized -- bacteria such as E. coli O157:H7, made infamous for hiding in ground beef, cookie dough, spinach and lettuce.

"That's the one I worry about, because we know from clinical experience that that can very readily land you in hospital with kidney failure and is potentially deadly," Acheson says.

But Reitzig and the other moms she knows who buy raw milk say using raw milk is one part of their philosophy that eating more local and natural foods is healthier.

And she trusts that the farmers she deals with are keeping their products clean and free of contamination.

She and one farmer's wife were pregnant at the same time and shared stories.

"It's so much more than just going and getting food. It's a relationship," Reitzig says.

As for the health claims, Acheson doesn't buy them.

"You know, a lot of that is anecdotal. I have never been convinced by any science that that's the case," he says.

Indeed, scientists say most of the claims are unproven. But a European study of children who lived on a farm and drank raw milk at an early age showed that it may offer some protection when it comes to allergies, it's unclear whether the protection is from being regularly exposed to bacteria from animals or from the milk itself.

But Acheson agrees that pasteurization kills some nutrients in milk -- a main argument for raw milk made by advocates like the Weston A. Price Foundation.

"You are going to impact vitamins, you are going to do other things to it. But in the grand scheme of things, in a complete, healthy diet, it is, frankly, in my opinion, irrelevant," he says.

He says a healthy diet will include whatever nutrients may be lost in pasteurization, and the risk of drinking raw milk isn't worth it.

He says his wife is very health conscious and asked him recently whether they should drink raw milk. His reply?

"You know I'll go some ways on some things, but not on this one," he says.

Even though he wouldn't drink it himself, Acheson says a total ban on raw milk is impractical and only drives Reitzig and others like her underground.

"I think there's an assumption [on regulators' part] that people who drink more raw milk are stupid. No, they're smart. I believe that the vast majority of them know what they're doing," he says.

They make a risk-benefit calculation, which many people do when it comes to smoking or driving without a seat belt.