Accessibility links
Difficult Births: Laboring And Delivering In Shackles Although no one knows how widespread the shackling of inmates during childbirth is, there's evidence it's still being practiced. In a recent survey, prisons in six states say they cuff either a woman's hand or ankle at the beginning of labor, and four say they shackle an ankle during delivery. But a growing number of states have moved to ban the practice. 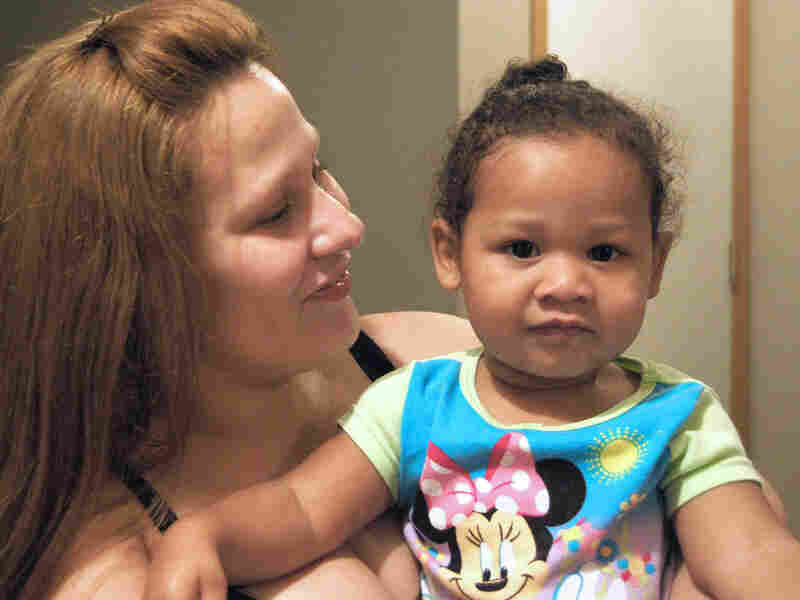 Jennifer Farrar gave birth to her daughter, Breanna, in January 2009. She says she labored with her feet shackled together, and delivered with one hand cuffed to the bed. Andrea Hsu/NPR hide caption 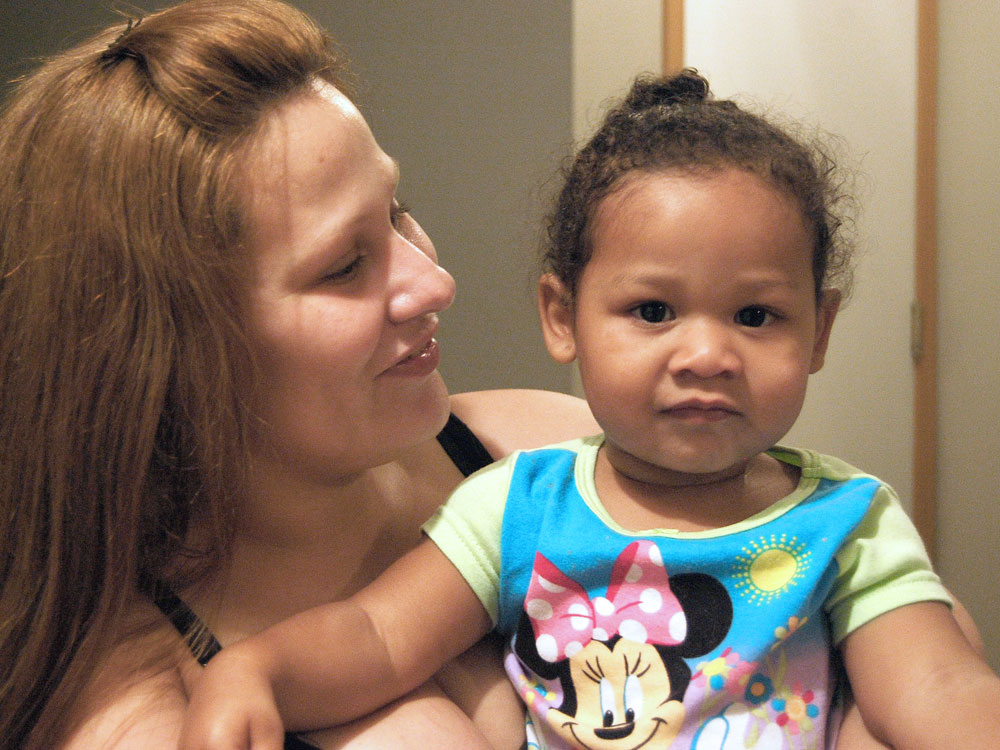 Jennifer Farrar gave birth to her daughter, Breanna, in January 2009. She says she labored with her feet shackled together, and delivered with one hand cuffed to the bed.

It's a practice so hidden, many don't realize it exists: the shackling of incarcerated women during childbirth.

Across the U.S., there are stories of women going from jails or prisons to hospitals, where they labor and sometimes even deliver while restrained with handcuffs, leg shackles or both.

There have also been lawsuits in a number of states. On Thursday, a jury in rural Arkansas found that a guard had violated the constitutional rights of a woman by shackling her while she was in labor, though they awarded her just $1. In May, a shackling case was settled in Washington state for $125,000. And in Illinois, there's a class action lawsuit against Cook County and its sheriff, Tom Dart.

Legs Chained, Handcuffed To The Bed

Chicago attorneys Tom Morrissey and Ken Flaxman believe there could be as many as 100 to 150 women included in the class action suit, with cases dating back to late 2006. They're seeking an end to the shackling of inmates during childbirth, and compensation for their clients, including Jennifer Farrar, 25.

Here I am, a mother giving birth. It should be a happy time in my life. I know that I did something wrong, and you have to take the responsibility for what you do. But it wasn't like I was a murderer.

In November 2008, Farrar was arrested for cashing fake payroll checks. She was charged with forgery, and booked into the Cook County Jail, a sprawling complex on the southwest side of Chicago, and one of the largest jails in the country. She was almost seven months pregnant at the time.

One day the following January, Farrar went to court for a hearing, and there the pains began. An ambulance was called. Farrar says officers cuffed her hands and chained her legs together. Another chain was placed around her belly, connecting her hands to her feet. When she got to the hospital, she says, the belly chain was removed, but her legs were still chained, and one hand was cuffed to the bed.

"The doctor and the nurse," Farrar says, "they were telling the officer, is this necessary, you know? Where is she going to go? She's in labor you know."

She says she remained that way for eight or nine hours, until it came time to push. At that point, the correctional officer unlocked the leg restraints, but left one arm cuffed to the bed. An hour later, Jennifer Farrar delivered her baby girl.

"Here I am, a mother giving birth," Farrar says. "It should be a happy time in my life. I know that I did something wrong, and you have to take the responsibility for what you do. But it wasn't like I was a murderer."

Another plaintiff, Cora Fletcher, was 17 years old in 2006 when she was charged with retail theft. A year later, she missed a court date, and a warrant was issued for her arrest. A year after that, officers showed up at her house, and took her in when she was eight months pregnant.

It was difficult to try to have a baby like that. Especially by this being my first baby. It was so painful ... and you can't move around like how you want to.

A couple weeks later, in a prenatal checkup at the jail, it was discovered that Fletcher's baby had no heartbeat. She was taken to the county hospital, where her arms and her legs were shackled to opposite sides of the bed.

Doctors tried to induce her, but it wasn't until three days later that she went into labor. Even then, Fletcher says, she was left with one hand and one leg shackled to the bed. "It was difficult to try to have a baby like that," Fletcher says. "Especially by this being my first baby. It was so painful ... and you can't move around like how you want to."

After delivering her stillborn child, Fletcher was allowed to hold the baby for 20 minutes.

Gail Smith, executive director of the group Chicago Legal Advocacy for Incarcerated Mothers, has worked in Illinois jails and prisons for 25 years and says shackling female inmates during labor is tantamount to torture. "I think that there is a general attitude on the part of some people that they don't deserve to be treated with full human rights," Smith says. "And I find that appalling."

The U.S. female prison population has grown eightfold since 1977, according to the Department of Justice's Bureau of Justice Statistics. Approximately two-thirds are in for nonviolent offenses. And yet, says Malika Saada Saar of the Rebecca Project for Human Rights, departments of corrections have not put enough thought into how treatment for women should be different from that for men.

"If a man behind bars has a broken arm, or needs to have his appendix taken out, that individual is put into restraints, into shackles during medical transport," Saada Saar says. "So essentially what is done for those men has been extended to women. And part of what's different is that we have babies."

Labor is the crux of the issue, says Steve Patterson, spokesman for the Cook County Sheriff's Office. "A correctional officer working on a tier on the midnight shift, or any other shift, is not trained to know when a woman is in labor or not," Patterson says.

Illinois, which passed anti-shackling legislation in 1999, requires that "when a pregnant female prisoner is brought to a hospital from a county jail for the purpose of delivering her baby, no handcuffs, shackles, or restraints of any kind may be used during her transport to a medical facility for the purpose of delivering her baby. Under no circumstances may leg irons or shackles or waist shackles be used on any pregnant female prisoner who is in labor."

In June 2010, the American Medical Association House of Delegates voted to develop model state legislation prohibiting the use of shackles on pregnant women.

The American College of Obstetricians and Gynecologists has testified that physical restraints have "made the labor and delivery process more difficult than it needs to be; thus overall putting the health and lives of the women and unborn children at risk."

Therefore, he says, correctional officers rely on medical personnel, either at the jail or at an outside hospital, to make the determination. Only when labor has been determined are all restraints removed. Patterson says that policy is consistent with state law and is necessary in a public hospital.

"We have to bring inmates to the same area that the general public comes to," Patterson says. "So, if you're laying in hospital bed, and in the next hospital bed is a woman who's in on a double murder charge, because she's pregnant she shouldn't be handcuffed to the side of the bed -- I think if you're the person laying in bed next to her you might disagree."

Patterson says in 1998, a pregnant inmate did escape during a medical visit. She was caught just off the hospital grounds. He knows of no escape attempts by pregnant inmates since 1999.

No one is sure just how many incarcerated women give birth each year; Saada Saar estimates it to be about 1,300. Nor does anyone know how widespread shackling is.

Ginette Ferszt, associate professor and psychiatric clinical nurse specialist from the University of Rhode Island College of Nursing, recently conducted a survey of state prisons to learn more about what practices are in place for pregnant inmates.

She and a physician at the Rhode Island Women's State Correctional Facility sent out questionnaires to wardens in all 50 states. The wardens were promised anonymity, and 19 replied. The survey asked about many issues related to pregnancy, including prenatal care, nutritional needs and shackling.

Ferszt says she was quite surprised to find that two facilities continue to use leg irons, belly chains and handcuffs during transport to prenatal visits.

She also learned that among the 19 prisons that responded, six of them cuff either a woman's hands or her ankle when labor begins. During the delivery of the baby, one prison says that handcuffs stay on, and four reported back that an ankle shackle remains on.

While disturbed by the findings, Ferszt did find hope in conversations with two wardens, when she realized their shackling policies weren't something they'd thought much about.

"For many rules and policies whether for women or men, they've existed for them a long time," Ferszt says. "It hadn't really occurred to these two wardens that this could potentially be a health problem, a health issue."

She says the two wardens have since said they'll sit down and make changes.