Accessibility links
Al-Qaida Magazine Draws Attention, But Few Fans The online publication emerged several weeks ago with headlines like "Make a Bomb in the Kitchen of Your Mom." U.S. intelligence officials were so concerned, they made it part of the president's security briefing. But analysts say it apparently isn't resonating with its intended audience: young, would-be jihadists. 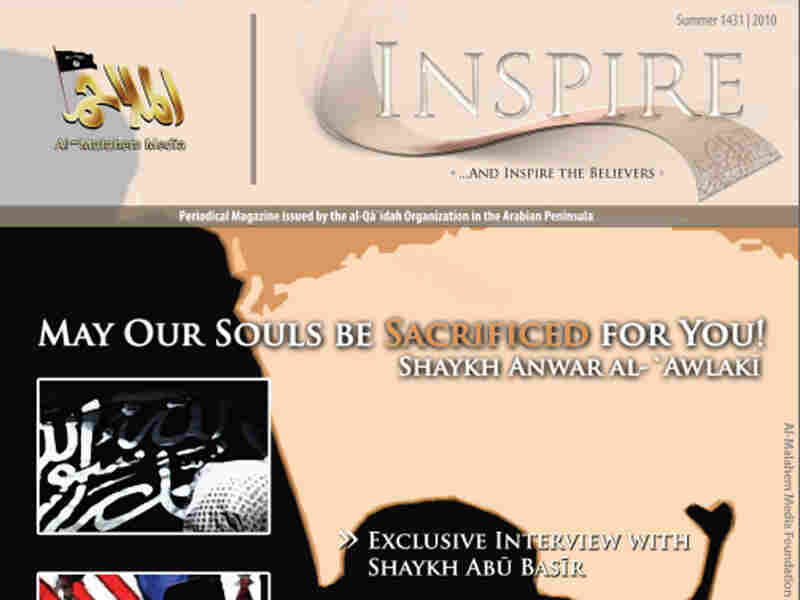 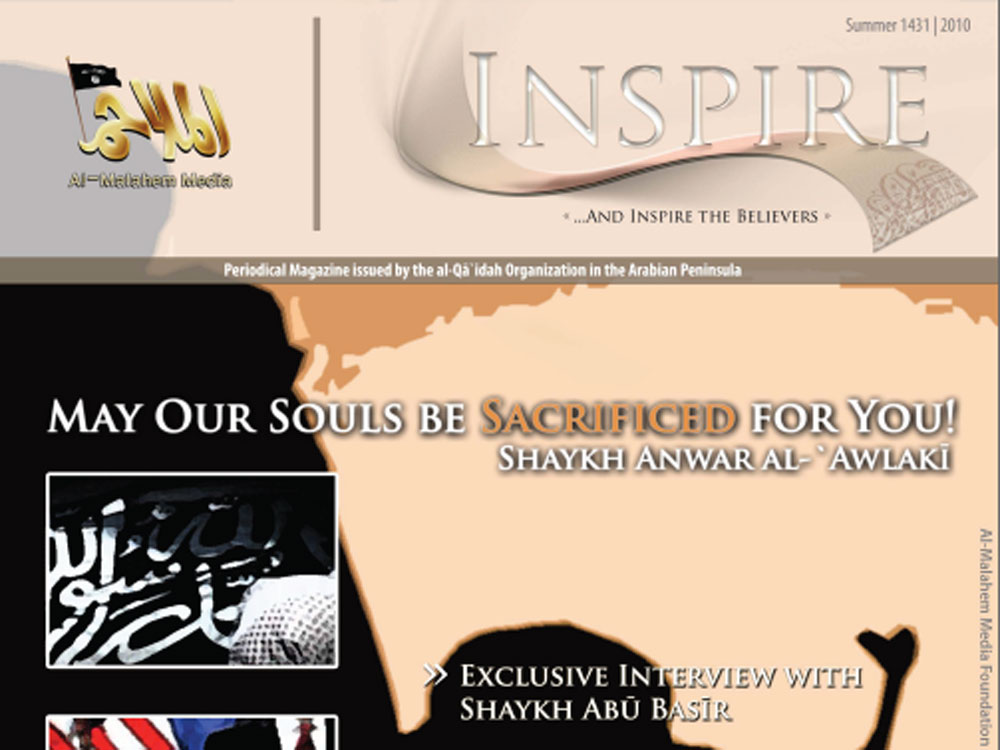 A computer screen shot shows the cover of the newly released first edition of the Yemen-based Al-Qaida in the Arabian Peninsula's online magazine.

Ever since it appeared on the Web several weeks ago, al-Qaida in the Arabian Peninsula's Inspire magazine has been the subject of intense scrutiny by U.S. intelligence officials.

Inspire is a 67-page glossy online publication that appears to have been published by al-Qaida's increasingly aggressive arm in Yemen. (Al-Qaida in the Arabian Peninsula, or AQAP, took credit for the attempted bombing of Detroit-bound Northwest Flight 253 on Christmas Day.)

Yet for all of the attention the magazine has received in the Western media, it hasn't seemed to get much traction with the very audience it is supposed to attract: aspiring violent jihadists.

Law enforcement officials say they can't remember when a media offering from al-Qaida has ever been the subject of so much discussion.

How To Make A Bomb

The magazine, they claim, is different because of how very American it seems to be. It is written in colloquial English. It has jazzy headlines and articles that would seem mainstream -- if they weren't about terrorism.

"Make a Bomb in the Kitchen of Your Mom," reads one headline. Unsure what to pack when you leave for jihad? This magazine helpfully provides a list.

Yet for anyone who tracks these kinds of jihadist publications, Inspire magazine is really just more of the same.

The U.S. intelligence community's focus on it is bewildering, analysts say.

"Frankly, I don't understand all the fuss about this particular one," says Thomas Hegghammer, a senior fellow at the Norwegian Defense Research Establishment, a Norwegian think tank.

"There is really nothing new about an English-language magazine like this. We've seen them since the early '90s really, and in recent years there have been several online. There is nothing new in the idea of the magazine or its content," he says.

Just who is behind the magazine has been the subject of enormous speculation.

Initially, U.S. intelligence officials thought it was the brainchild of radical cleric Anwar al-Awlaki. He is the American-born internet imam who has been connected to the Fort Hood shootings in Texas in November 2009 and the attempt to bomb a U.S. airliner over Detroit on Christmas Day.

His influence on Western violent jihadists is thought to be so profound that he is on the CIA's "capture or kill" list. Officials won't say publicly that Awlaki has essentially been targeted for assassination.

People in the chat rooms just aren't discussing it.

Now intelligence sources tell NPR they think the magazine is more likely the handiwork of another American -- a young man named Samir Khan.

Khan isn't a noted Islamic scholar, or even a charismatic leader, but he is on the vanguard of a new generation of Web-savvy jihadists. He was born in Saudi Arabia and grew up in Queens, N.Y. For years he was best known in jihadist circles for running a pro al-Qaida blog out of his house in Charlotte, N.C.

He surfaced in Yemen last year, where he was studying Arabic. Then he seemed to just disappear, the sources say.

Officials tell NPR they believe sometime last year he joined AQAP, the Yemeni arm of al-Qaida. Khan is thought to be hiding out in the hinterlands of Yemen with Awlaki.

Officials suspect that Khan both produced and edited Inspire magazine for AQAP. Some of the articles in Inspire appear to be virtually lifted from an online magazine Khan put together last year called Jihad Recollection.

Khan's link to Inspire would, of course, explain its colloquial English.

Failing To Attract A Following

But it appears that in spite of the fanfare that has surrounded the launch of the publication, not many people online are reading -- or being inspired by -- Inspire.

Akil Awan, an associate professor in international terrorism at the University of London, trolls jihadist websites as part of his research. He says for all the attention and concern over the AQAP magazine, it isn't resonating with young, would-be jihadists.

"It hasn't made that much of an impact online, for example within mainstream jihadist sites," Awan says.

When asked how he can determine that, his answer is simple: "People in the chat rooms just aren't discussing it."

It is rather ironic that a publication that was deemed so important by the U.S. intelligence community that it was shown to President Obama as part of a national security briefing has fallen so flat with the people it sought as an audience.

The jihadist media world is facing a number of problems, the first of which is technical. He says just keeping forums and publications up on the Web and safe from government infiltration can be a full-time job.

Inspire is a case in point. When al-Qaida in the Arabian Peninsula first posted the magazine, it was almost immediately corrupted. Only the table of contents and several articles appeared.

Some analysts said AQAP had botched it. Others say U.S. government hackers made sure the magazine didn't appear online correctly.

The other problem new jihadist publications face is more fundamental -- market saturation. There are too many voices.

"It is almost an informational tragedy," Hegghammer says. "The whole movement is losing out because everyone is trying to be heard and get the attention of the recruits. If you are a new recruit today and if you go on the forums, it is bewildering, I think. There is so much out there, and deciding who to listen to and which sites to go can be difficult, I think."

Awan at the University of London agrees. He says that in many ways, al-Qaida's online media strategy has become a victim of the Internet jihadist movement's own success.

"With so many chat rooms and publications out there, what actually happens is the message becomes much weaker and much more diffuse," he says. That's why he believes Inspire got lost in all the noise.

Cacophony of messages aside, U.S. law enforcement officials are still worried about the Internet and its ability to radicalize young Americans. And it still isn't clear whether a glossy online magazine might, for some unknown reason, be the very thing to break through.

Once its initial file was corrupted, it took al-Qaida in the Arabian Peninsula almost two weeks to get another full copy of the magazine up on the Web. Usually such postings are put up with redundant copies so corrupted files don't prevent the message from getting out. No one is sure why AQAP didn't do that initially.

Even with all the coverage in the media, participants in jihadist chat rooms still don't seem very interested. But that doesn't necessarily mean the magazine won't eventually find an audience somewhere else.