Accessibility links
The Tiny Ant That's Taking On The Big City This is a story about a party girl. Scientists call her Tapinoma sessile, and her story is an old one, really. She moved from the country to the city and totally reinvented herself. 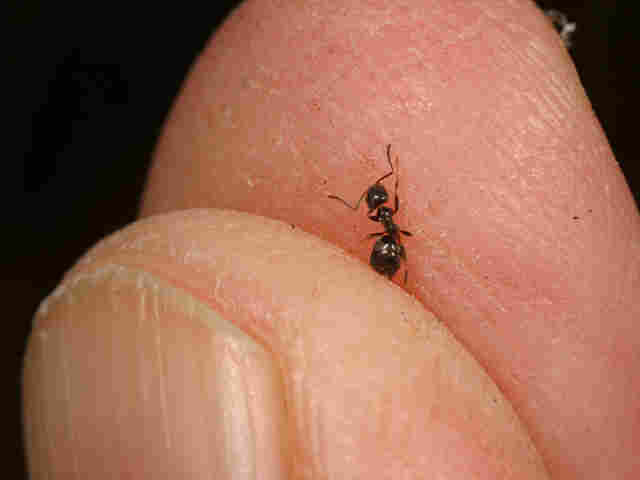 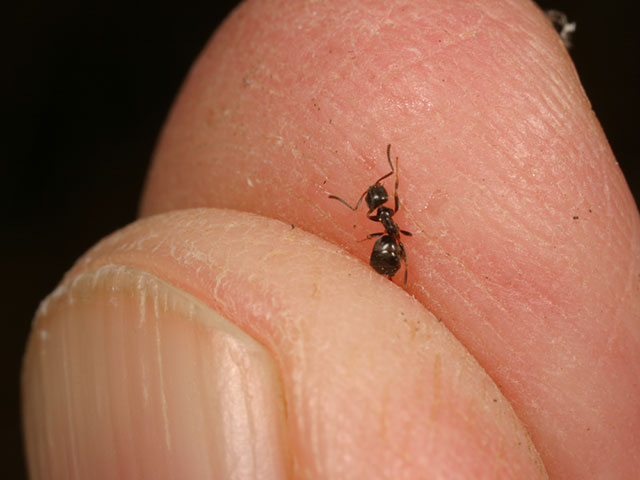 Here are some general tips from entomologist Wayne White to minimize pest issues — and ants in particular.

This is a story about a party girl. Her name is Tapinoma Sessile, and her story is an old one, really. She moved from the country to the city and totally reinvented herself. She got caught up in the glitz and glam of urban life, and now, she's dead in my friend Aaron's apartment.

"Everywhere. Even on the floors," Aaron says. "Everywhere you looked, swarms of ants."

Over the past few decades, this ant has adapted to city life -- in a major way.

"You know, 20 years ago, I don't believe we had nearly the calls about odorous house ants," says Wayne White, an entomologist with American Pest, a pest control company in Takoma Park, Md. "We would've still had a large number of calls about ants, but they were different kinds of ants."

White and many other scientists say sessile is becoming a dominant urban species. "They're our No. 1 pest."

White dumps a jar of them out onto the table at his office to show me how to identify this type of ant.

White holds up his finger, smeared with ant paste, and we take a whiff. It smells like blue cheese and coconut.

It's not a bad smell, just not what I expected ants to smell like. But that's how you know it's sessile. Smell is also how sessile knows it's sessile. Ants, it's believed, use smell to recognize whether or not they belong to the same colony. To demonstrate this, White pulls out two vials of ants, each from different sides of one building, probably different nests.

"Let's see what happens if we dump a few in there." He puts some ants from one vial with the others.

These ants should be at war if they're from different colonies, but they're not. They're actually pretty calm, like they know each other. These ants were collected at least 100 feet apart, so that means their colony could be really big -- unlike what sessile does in rural areas.

"In nature, they'll be just a small colony, with a queen and maybe 50 workers, and they might live in an acorn in a forest," White says.

But in the city, they form massive supercolonies with thousands of queens and millions of workers. And not just in suburban Washington, D.C.; it's happening in Tennessee, Colorado, Utah and Indiana. A study at Purdue University found one supercolony that spanned an entire city block.

"Urban populations are thousands -- possibly tens of thousands -- times larger than anything I've ever seen in nature," says Sean Menke, a research fellow at North Carolina State University. He recently wrote a paper on sessile. "It is on a completely different scale."

He also noticed sessile is behaving more aggressively in the city.

"It's expressing something very different from anything anybody's ever found in a more natural habitat," he says.

Basically, buried in the DNA of this ant is a little time bomb. Given the right conditions -- which, it turns out, don't occur very commonly in nature -- it can change its behavior and form these massive supercolonies. There's a scientific word for this: phenotypic plasticity, the ability of an individual to change its traits to adapt to its environment. That raises the question: What about the city is driving sessile to change?

The Lure Of The Big City

Menke says it's a result of knocking down the forests and grasslands and replacing them with whole new environments. "You start out with zero species in there. The first thing that gets in has no parasites, no predators, no competitors."

That's one possibility. The other is that "we've just made a buffet table for them," Menke says.

In nature, the ants don't come across high fructose corn syrup too often, or sheltered basements with year-round heating.

Scientists don't yet know which factor attracts sessile, the abundance of food or the new environment. Nor do they know why it's suddenly happening now. Is it the expansion of cities? Climate change? Undetected genetic changes? They just don't know. But as they try to answer all the questions that sessile raises, they'll learn more about what makes a species invasive.

For now, they just know sessile has a new urban attitude and loves a good party.