Accessibility links
Allen Takes Day-At-A-Time Approach To Well Seepage The government's point man on the Gulf crisis authorizes BP to keep its blown-out well capped for another 24 hours after deciding that evidence of oil and gas leaks around the site were not cause for serious alarm. The seafloor will be closely monitored for any signs of new leaks.

Three oil and gas seeps on the seafloor near BP's damaged oil well are not cause for serious alarm, according to retired Adm. Thad Allen, the government's point man on the federal response to the Gulf spill. 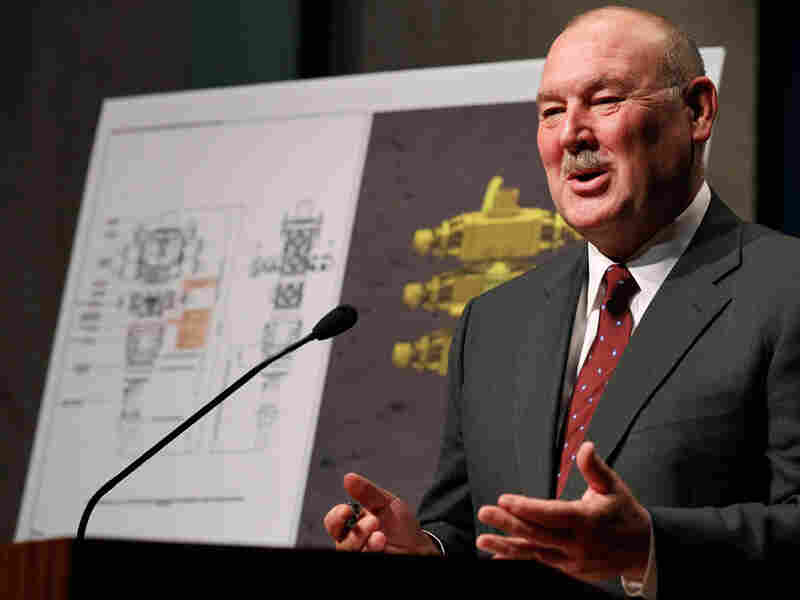 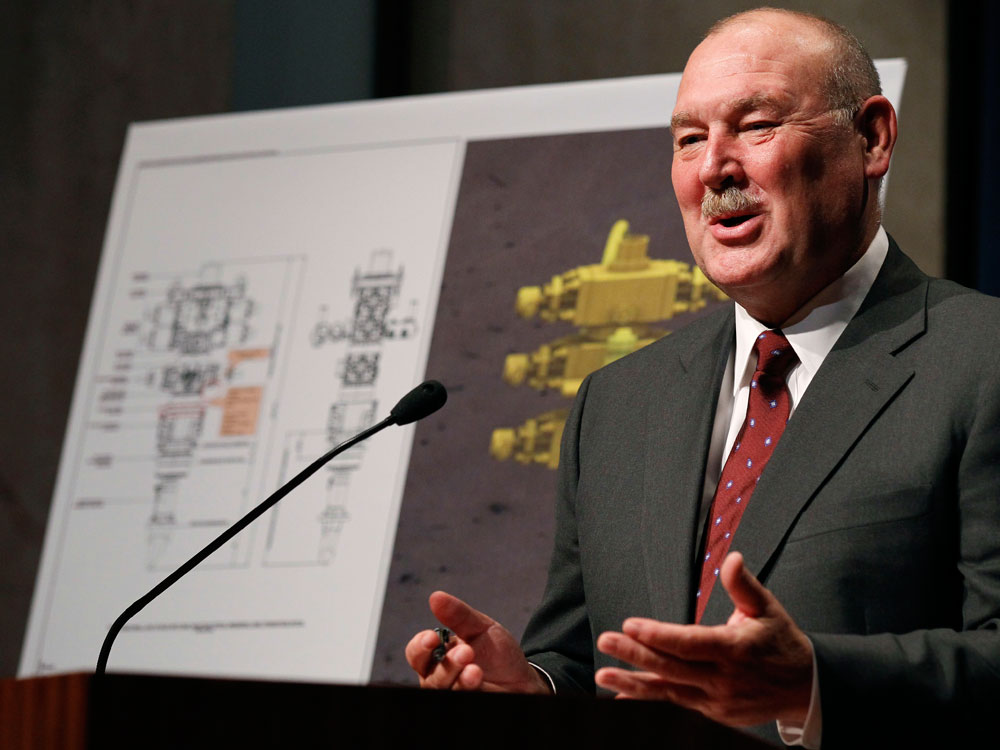 Retired Coast Guard Adm. Thad Allen speaks to the news media about the BP oil spill in the Gulf of Mexico.

Allen told BP it can keep the recently fitted cap on the well closed for at least another 24 hours. The company pledged to closely monitor the seafloor for signs of any new leaks.

"I restated our firm position that this test will only continue if they continue to meet their obligations to rigorously monitor for any signs that this test could worsen the overall situation," Allen said in a statement. "At any moment, we have the ability to return to the safe containment of the oil on the surface until the time the relief well is completed and the well is permanently killed."

-- One is a seep of oil or gas spotted a little less than two miles away from the blown-out well. Allen said that one was probably just a natural seep, common in the region.

-- A few hundred yards from the well, scientists are keeping an eye on a small amount of gas bubbles and other anomalies that Allen didn't identify further.

-- And a small amount of oil and gas are oozing out of the new valve system, practically a drop at a time.

BP and government scientists had been worried because the pressure inside the well was not as high as expected. Experts say it's possible the cap could make matters worse by sending oil flooding into the bedrock and up through many areas of the sea floor where it can't be as easily controlled. 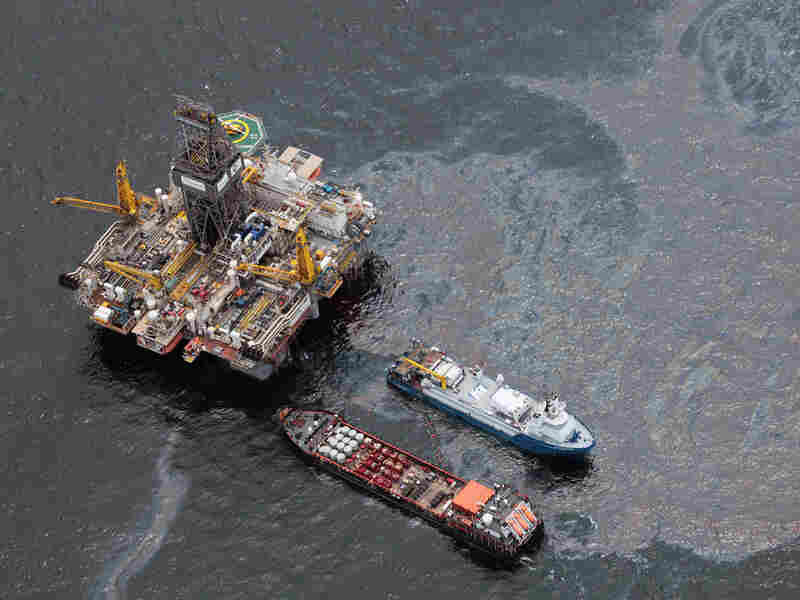 Workboats operate near the Transocean Development Drilling Rig II at the site of the Deepwater Horizon incident in the Gulf of Mexico on Friday. Dave Martin/AP hide caption 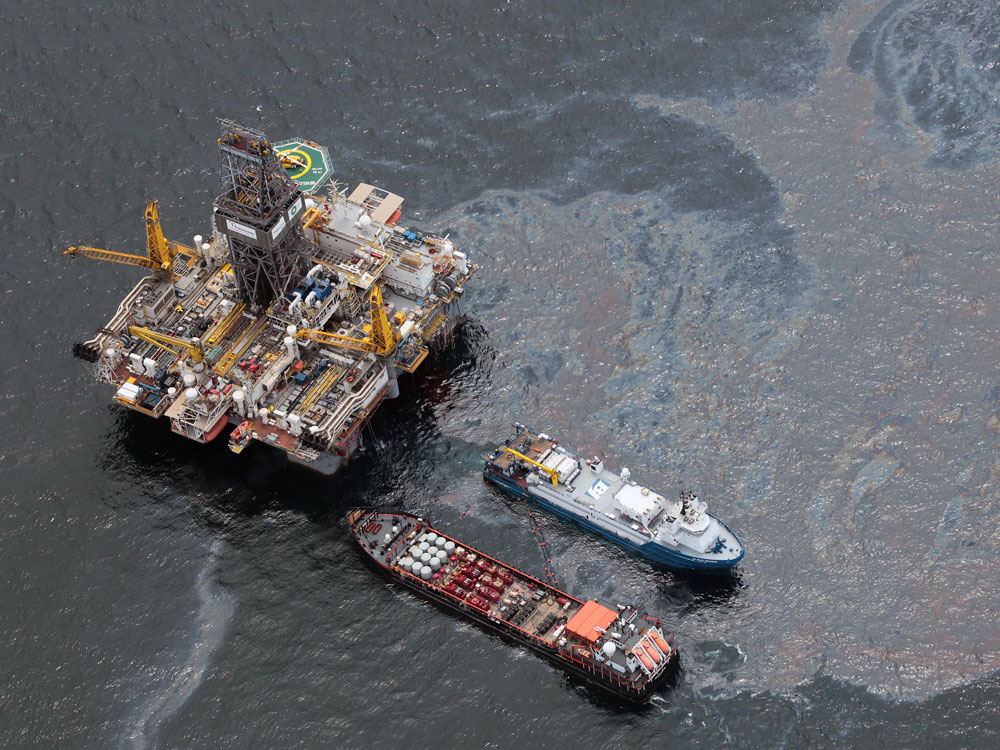 Workboats operate near the Transocean Development Drilling Rig II at the site of the Deepwater Horizon incident in the Gulf of Mexico on Friday.

BP said Sunday the capped well seemed to be holding up and that it hoped to leave it capped for the next few weeks, while it works on plugging the well permanently with cement.

Over the weekend, the situation seemed like it might serious enough to end the test and open the oil well to the sea again.

Monday, Allen said the goal is to go forward carefully, day by day, reserving the option of opening the well if there's any evidence that keeping the cap is not doing its job.

He left open the possibility that if all goes well, the cap can remain closed until a relief well is finished a few weeks from now.

"No one associated with this whole activity ... wants to see any more oil flow into the Gulf of Mexico," said Doug Suttles, BP's chief operating officer. "Right now we don't have a target to return the well to flow."

Unimpeded, the well spewed as much as 2.5 million gallons a day, according to the government's worst-case estimates. It's possible the oil has been depleted, and that's why pressure readings from the cap have been lower than anticipated, BP has said.

Scientists still aren't sure whether the shut-in is causing oil to leak into the bedrock surrounding the well, which could make the seabed unstable.

That's why pumping the oil up to four ships on the surface and containing it there may be a safer option.

But to do that, millions of gallons of oil could spew into the water when the cap is initially reopened, an image both BP and the federal government would like to avoid.

First, the well must be opened to let off pressure and let out any sand that might have accumulated there, NPR's Harris explained on All Things Considered. And BP says it would take about three days to bring the production ships back into full service.

The ships can only process 50,000 barrels of oil a day, and should the well pump out more oil than that, oil might continue to rush into the Gulf while more ships were sent to the scene.

BP is drilling two relief wells, one of them as a backup. The company said work on the first one was far enough along that officials expect to reach the broken well's casing, or pipes, deep underground by late this month. Then the job of jamming it with mud and cement could take "a number of days through a few weeks."

BP said Monday its spill costs have reached $4 billion so far. The company also said it had paid out $207 million to address more than 67,500 individual claims for economic damages.

Ken Feinberg, the federal administrator of a $20 billion Gulf oil compensation fund, urged fisherman and others to take advantage of the fund rather than take their chances in court.

Feinberg said fishermen and others with lost income would be "crazy" to bypass the fund and try their luck in court.

"Anybody can decide 'I want nothing to do with this. I'd rather go to court or implement my other legal rights.' Go ahead. You're crazy to do so, though," he said in a speech at the Economic Club of Washington, D.C.

"I'll be much more generous than any court would be. And at the same time, you won't need to pay lawyers and costs," he said.