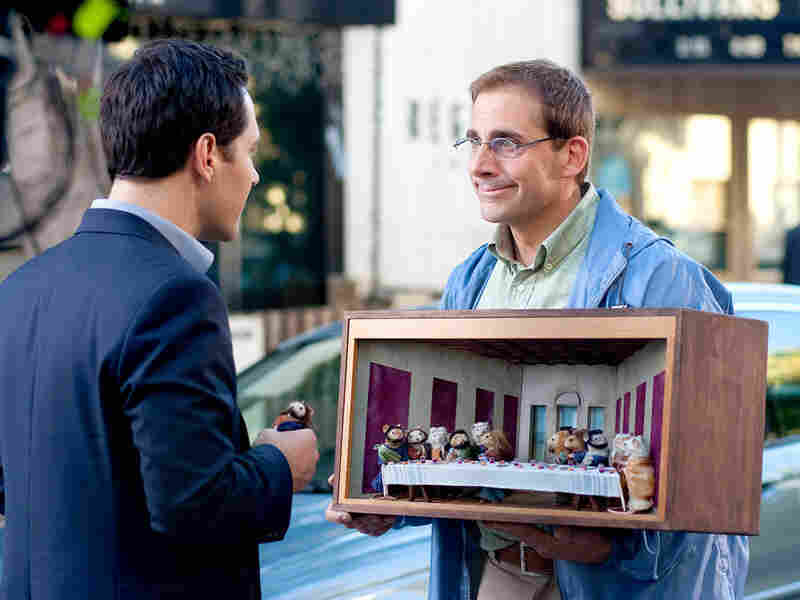 If You Give A Mouse A Diorama: Steve Carell (right) stars as Barry, an amateur taxidermist who's invited to a strange dinner party by Tim (Paul Rudd), a hedge fund manager on the make. Merie Weismiller Wallace/Paramount hide caption 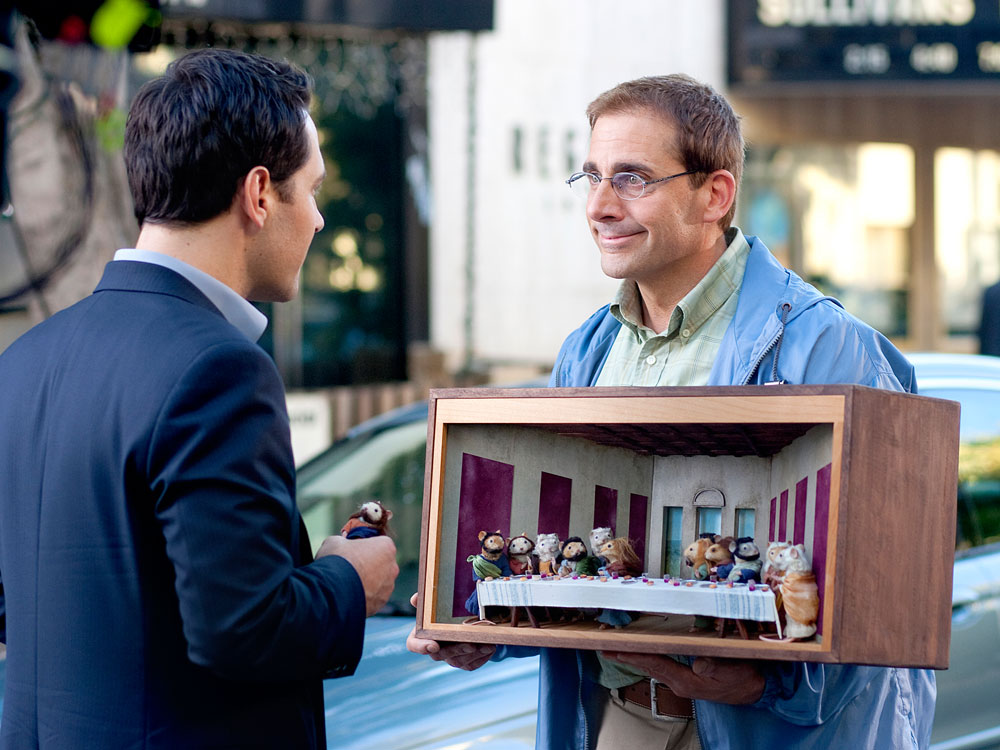 If You Give A Mouse A Diorama: Steve Carell (right) stars as Barry, an amateur taxidermist who's invited to a strange dinner party by Tim (Paul Rudd), a hedge fund manager on the make.

Jay Roach's newest film, Dinner for Schmucks, stars Paul Rudd as Tim, a corporate executive who is invited to a dinner party with one strange caveat: Each invited guest must bring the biggest idiot he can find along with him -- and the winner will earn accolades and admiration from his boss.

Rudd decides to bring an IRS employee named Barry, played by Steve Carell. Barry -- who seems to lack an internal filter, and who spends his off hours building lovingly detailed dioramas featuring taxidermied rodents -- inadvertently turns the tables on the assembled guests.

Both Roach and Carell joined Fresh Air's Dave Davies for a discussion about the film, loosely adapted from the 1998 French comedy Le Diner de Cons. In that film, the idiot character creates elaborate designs out of matchsticks; Roach says he made a conscious decision to change Carell's obsession to express who he is a bit more.

"There's a little hint of something sad underneath, and the [stuffed] mice become a way for him to express this optimistic view of life," he says. "And that's what made it seem like a kind of creepy-funny thing at first, and then these layers unfold."

Roach is the director of several films, including Austin Powers, Mystery, Alaska, Recount and Meet the Parents. Carell won a Golden Globe as Michael Scott on the NBC sitcom The Office and has starred in Little Miss Sunshine, Bruce Almighty, Anchorman and The 40-Year-Old Virgin.

On the pathos of Barry's life

Carell: "I see him as a guy who lives on the fringe of society. He's an incredibly optimistic person and wears his heart on his sleeve, and just wants to make everyone around him happy. But in doing so, it has the exact opposite effect. He tends to spread misery wherever he goes. But it's so well-intentioned ... and that's really what drew me to the character." 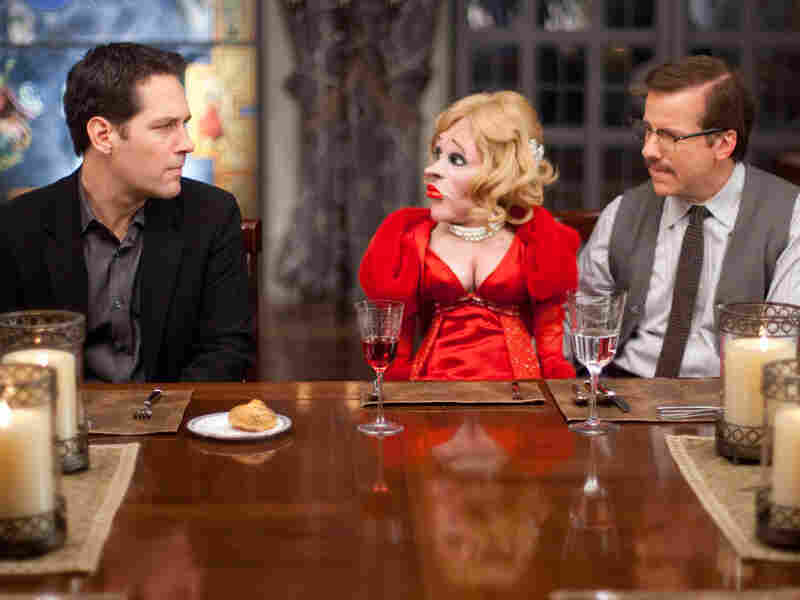 'Dinner' Chat: Other guests at the table include a man (Jeff Dunham, right) who's unaccountably attached to his emotionally abusive "wife," who looks an awful lot like a ventriloquist's dummy. Merie Weismiller Wallace/Paramount hide caption 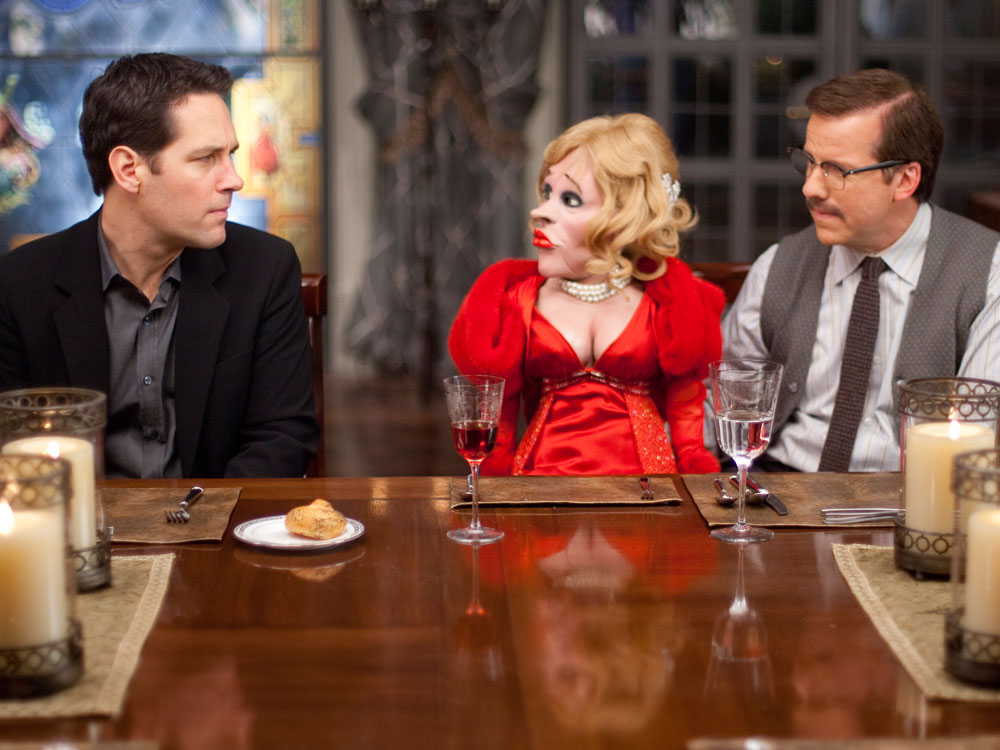 'Dinner' Chat: Other guests at the table include a man (Jeff Dunham, right) who's unaccountably attached to his emotionally abusive "wife," who looks an awful lot like a ventriloquist's dummy.

On doing improv in a scripted movie

Carell: "I used to literally hear the film going through the camera and I would constantly think about how much time and money I was wasting by being on camera. I had a great deal of guilt about that but when you work with somebody like Jay [Roach] who really gives you the freedom to fail, then you don't feel like there are any repercussions to that, other than some of the stuff might work and some of the stuff might not. ... I think it's really creating an environment where people can explore and have fun."

On directing the politically themed Recount after a long comedy career

Roach: "When I came out of film school, I started writing and I mostly wrote very serious stuff. I always thought I would go into more serious films. It was Mike Myers who said 'Oh, you should do this film,' and I got to do Austin Powers. And I got on a wave of those things. And I had always wanted to do a political film ... and Sydney Pollack had to drop out of Recount. ... And when I read the script, [I thought] man, what a pressure cooker. I love suspense. I love comedy that's based on suspense, and I loved the suspense of that [film]."

On the end of The Office

Carell: "I thought it was just time to move on. I want to spend more time with my family -- I have two little kids -- and it just seemed like the time was right for me. But I think the show is incredibly strong, and the writers are great, and the cast is really an ensemble. I've always thought of myself as a member of this great ensemble cast, so I see it as just one member of that ensemble sort of drifting off. The show has shown itself to be very resilient and [be able to] incorporate new characters and new scenarios and story lines, so I have no doubt it will continue to be incredibly strong."