Accessibility links
Rafters Push For 'Right To Float' In Colorado A private landowner says he doesn't want people rafting through his property. Technically, the state constitution says the waterways are open to the public, but private landowners often own the riverbeds and banks. The issue was so contentious, the governor got involved. 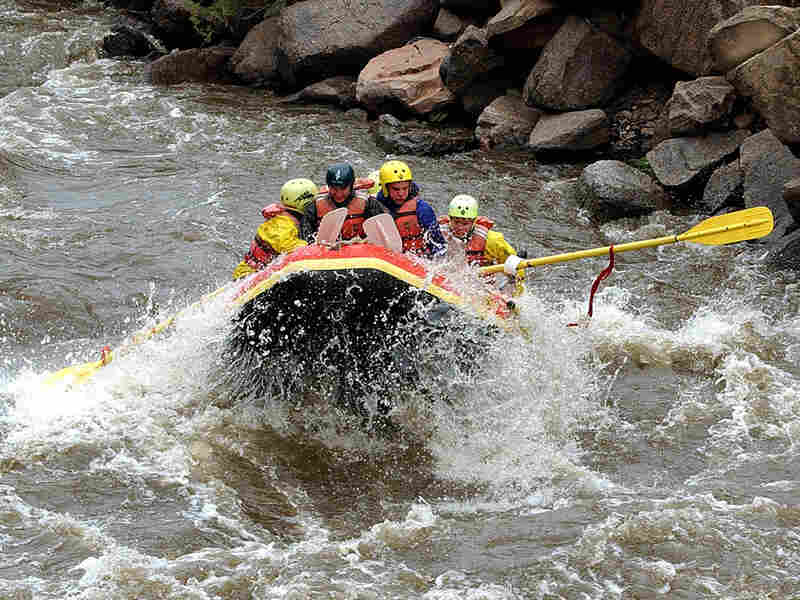 The rafting industry is a key economic driver in many rural towns in Colorado. Ed Andrieski, File/AP hide caption 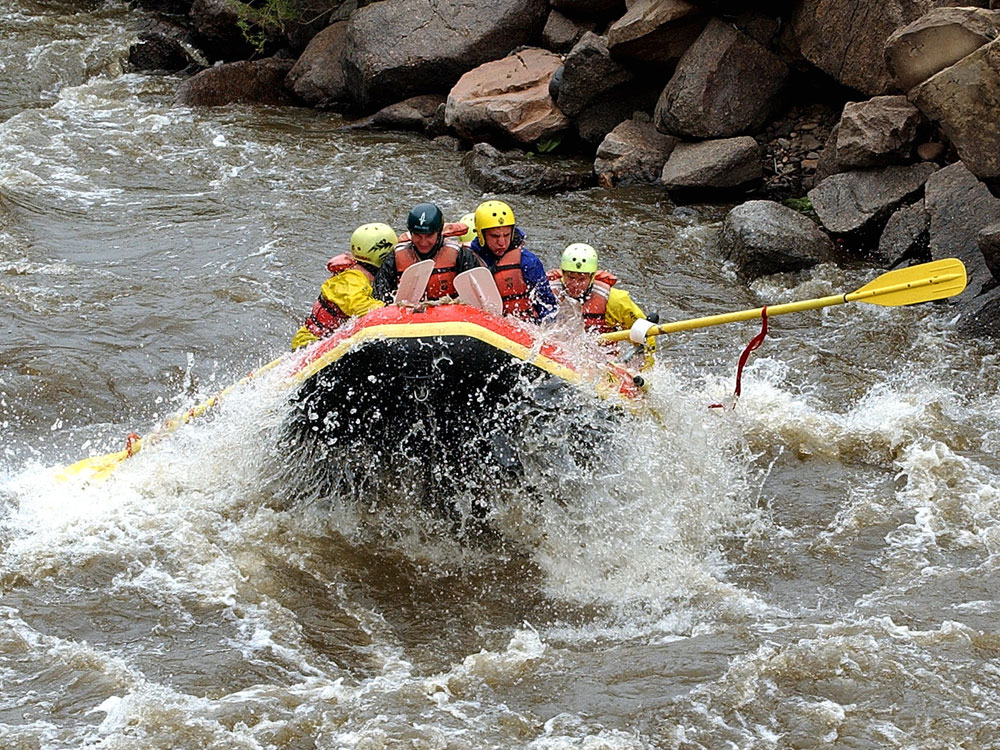 The rafting industry is a key economic driver in many rural towns in Colorado.

Each year, around a half a million people go whitewater rafting in Colorado, and the industry is a key economic driver in many rural towns. But in recent months, the issue of rafting and who can float through stretches of private property has divided the state.

The topic surfaced in the state legislature when a private landowner wanted to ban rafting on a two-mile stretch of river that flows through his ranch.

Most of Colorado's raftable rivers flow through a patchwork of public and private land. The state constitution says the waterways are open to the public for their enjoyment, but private landowners often own the riverbeds and banks. Touching an underwater rock or coming ashore could be considered civil trespassing.

"This is at the heart of Colorado. You have a lot of different interests that collide. And it was just a matter of time before it was going to come to a head," says Don Sabrowski, sitting next to a proposed development on the Taylor River near the town of Crested Butte.

Sabrowski manages the property for Texas-based developer Lewis Shaw, who bought the ranch several years ago and is building an exclusive fishing community with multi-million-dollar homes. Earlier this year, Shaw told two rafting companies they could no longer float rafts along the river past his ranch. 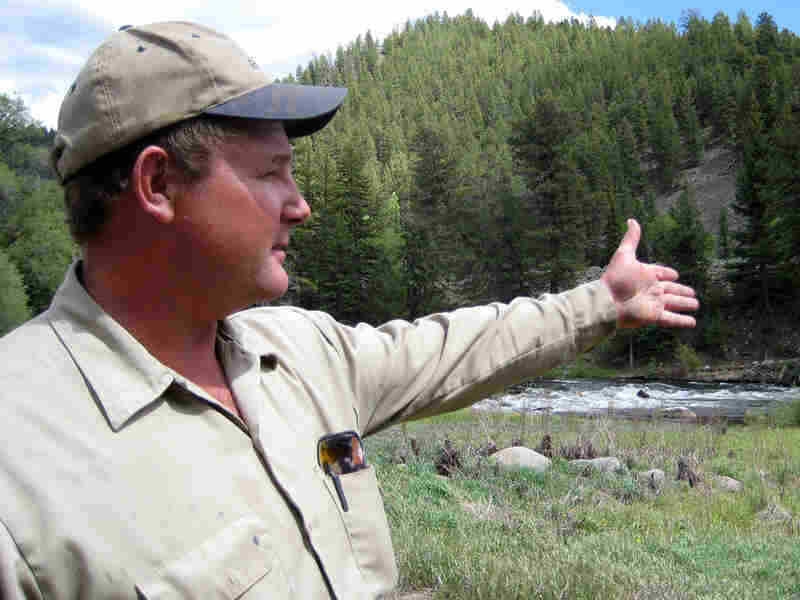 Don Sabrowski points to the stretch of the Taylor River that would have been banned for rafters. Bente Birkeland hide caption 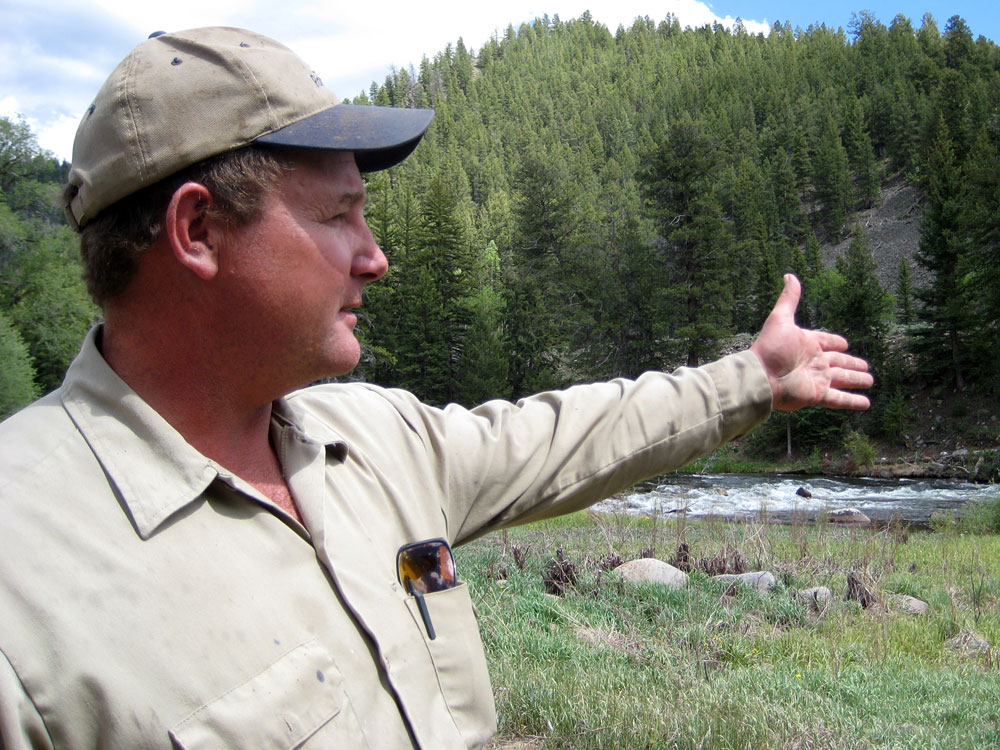 Don Sabrowski points to the stretch of the Taylor River that would have been banned for rafters.

"Everyone seems to lead off with the statement that a rich Texan flies in, in his Learjet, and wants to shut down rafting in Colorado," Shaw says. "None of that is true. My goal was simply to develop this and the little bit of heaven that it is and have peace."

But there was no peace this spring when the state legislature stepped in and tried to pass a controversial bill giving rafters the right to float.

Republican state Rep. Jerry Sonnenberg is a farmer and rancher from eastern Colorado. He argued against the bill.

"I labeled this a 'right to trespass' bill," Sonnenberg says. "Are we trying to set a precedent that maybe then hunters can go on our property on the eastern plains -- where we don't have rafting -- in the name of recreation? And I think that's why we saw people from across the state get involved in this."

The bill died on the final day of the legislative session in May. And eventually Democratic Gov. Bill Ritter had to broker a temporary compromise on the Taylor River case, giving the rafting companies floating rights for the next four years. After that, who knows?

Matt Brown -- who co-owns Scenic River Tours, one of the companies involved in the dispute -- says it's been a tough situation.

"I just have always believed that the rivers belong to the public," Brown says. "Everybody has the right to use them."

Brown and other rafters worry that because the legislature failed to act, the issue hasn't gone away. As one outfitter put it, the political maneuverings took care of the immediate problem, but the issue could surface at other times, on other rivers, with other players.