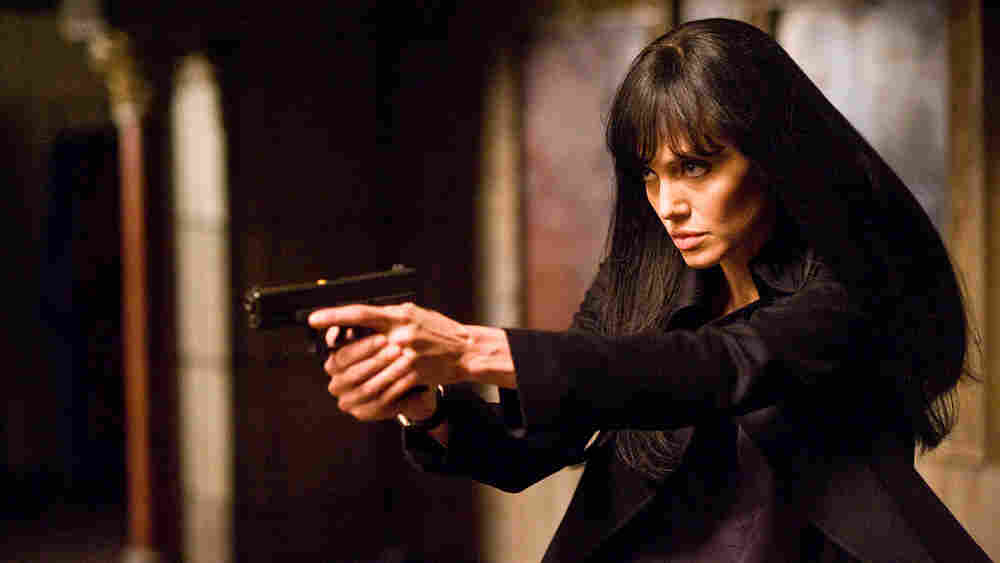 Rated PG-13 for intense sequences of violence and action.

'She Had The Drop On Me'

Salt is a summer action movie, so it's hardly the place to be looking for cast-iron logic. Or for plausible characters, for that matter. You go for brisk stunts expertly executed, and for action that doesn't allow you to catch your breath.

Angelina Jolie stars as a tough-as-nails CIA agent who gets the surprise of her life when she's assigned to interview a Russian defector, who offers up a warning about a sleeper agent:

"Today, the agent will travel to New York City to kill the president," the defector says. "The name of the agent is Evelyn Salt."

"Then you are a Russian spy."

Now, if there ever was a time when cooler heads should prevail, this would be it. Instead, Salt turns renegade and flees the building at a dead run, with half the CIA on her tail.

The film's plot, which turns on secret Russian agents planted deep in U.S. soil, gets increasingly preposterous -- despite its echo of recent headlines. What saves the movie from total silliness is star Jolie's fierce commitment to action, and the way she projects ice-cold fury.

Her don't-mess-with-me fierceness allows her to throw herself into the martial-arts action like she means every blow she strikes. What the actress does with a part that was written for a man is what holds our interest here.

Salt is set up, as most films seem to be these days, with a sequel in mind. Personally, I hope they call it Salt II. That would make it the first Hollywood blockbuster to be named after a real-life nuclear arms reduction treaty. Now that would be something to look forward to.