Accessibility links
Eating Nutritiously A Struggle When Money Is Scarce The Williamsons of Carlisle, Pa., live well below the poverty line. And in the family's struggle to obtain enough food, nutrition sometimes takes a back seat to necessity. Hunger in America is complicated. It's not just getting enough food, but getting the right food -- and making the right choices. 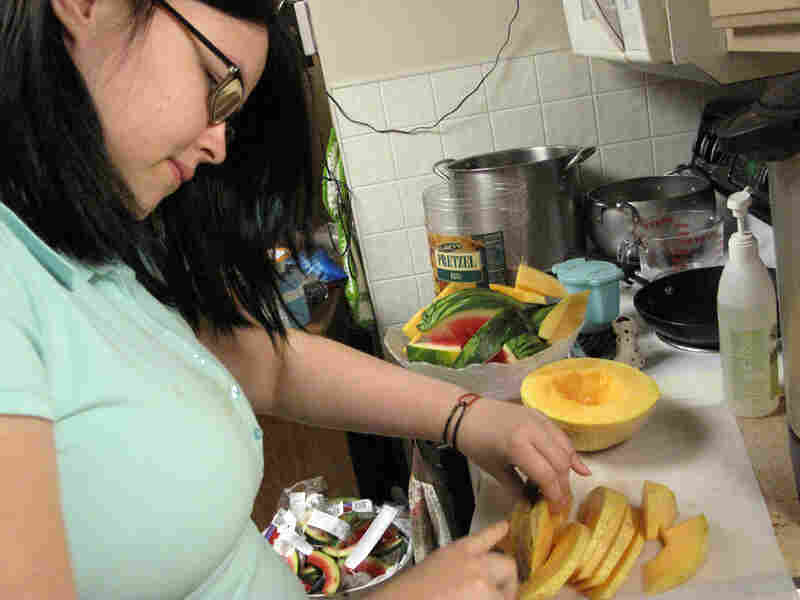 Beanna Williamson, 14, is one of 17 million children who live in U.S. households where getting enough food is a challenge. Sometimes it's hard for the poor to eat healthy because it costs more. Pam Fessler/NPR hide caption 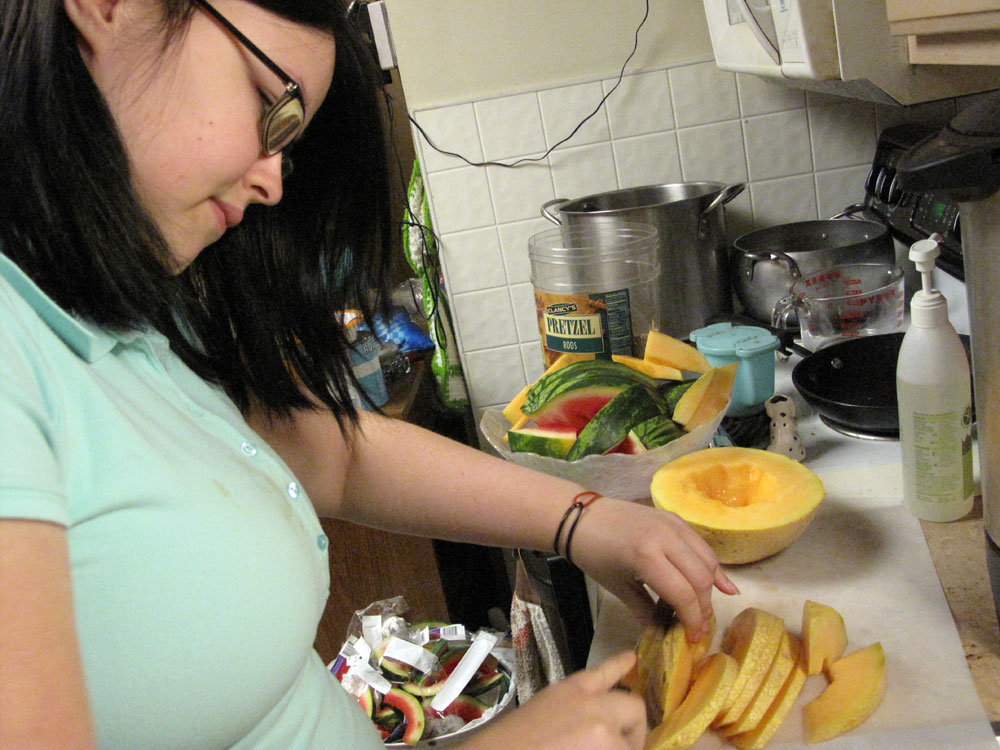 Beanna Williamson, 14, is one of 17 million children who live in U.S. households where getting enough food is a challenge. Sometimes it's hard for the poor to eat healthy because it costs more.

Alex Williamson, 8, doesn't look very hungry -- in fact, he's a little chubby. But Alex, who lives in Carlisle, Pa., is one of 17 million children who live in U.S. households where getting enough food is a challenge.

The Obama administration has pledged to end childhood hunger in America by 2015. A key element of that challenge is to make sure the food hungry children eat is nutritious. They're lofty goals that will be difficult to achieve.

"When he gets up on his own, he'll go find what he wants," she says. "He'll get a hot dog bun, or get a piece of bread. He'll get an ice pop or something."

And that's exactly what he did early one morning, before his family headed out to the local food pantry. Alex ate a blue ice pop for breakfast.

A Struggle To Eat The 'Right' Food

Connie Williamson says it's not easy on a tight budget. She spends hours driving around each month looking for deals. She has to stretch $600 in food stamps for herself, her husband, Alex and two teenage girls.

You can get leaner cuts of meat, but then they're more expensive. You can get fresh fruit every couple of days and blow half of your budget on fresh fruits and vegetables in a week's time, easy.

"You can get leaner cuts of meat, but then they're more expensive," she says. "You can get fresh fruit every couple of days and blow half of your budget on fresh fruits and vegetables in a week's time, easy."

The Williamsons live well below the poverty line. And in the family's struggle to obtain enough food, nutrition sometimes takes a back seat to necessity. There's often a tug of war between the best intentions and some not-so-good eating.

For example, the Williamsons have a garden behind their apartment in downtown Carlisle. They grow lots of healthy food -- zucchini, peppers and Brussels sprouts. But when Alex was thirsty after a walk, his mother gave him a plastic water bottle filled with orange soda.

Elaine Livas, who runs Project SHARE, the local food pantry, says she sees it all time.

Livas says low-income families might know milk is better for their kids, but when it comes to filling a hungry stomach, a cheaper high-calorie option can look pretty good.

Read Part 1 Of This Report

Project SHARE, like many food pantries and soup kitchens, is increasingly offering cooking and nutrition classes to help their clients get the most out of what they eat. And Alex Williamson is taking some of those classes.

"Because really, that's what we need, a transformation in how people view their relationship with food," Livas says.

A Third Of U.S. Children Are Overweight

The White House agrees. First lady Michelle Obama recently welcomed hundreds of chefs on the White House lawn. She was encouraging them to volunteer at schools to help cafeteria workers, students and their parents learn how to prepare more nutritious meals.

She noted that almost a third of U.S. children are overweight.

"Good nutrition at school is more important than ever," she told the chefs. "A major key to giving our children a healthy future will be to pass a strong child nutrition bill."

That's a big part of the administration's plan to end childhood hunger. President Obama has asked Congress for a billion dollars more a year to do things like make school lunches healthier and to expand access to subsidized meals for low-income children. Advocates say it will help kids learn better, and reduce health care costs.

There's a lot of support on Capitol Hill, but lawmakers are also increasingly nervous about new spending. Committees in both chambers have passed scaled-back versions, and it's unclear whether a bill can be enacted before year's end.

In an exchange at a House hearing this month with Agriculture Secretary Tom Vilsack, Rep. Bill Cassidy (R-LA) raised other concerns.

"I have no doubt there are kids that go to school hungry," he said. "But I have to admit, every time I hear that we have an obesity problem and everybody's going hungry, how do you reconcile the two?"

Vilsack said they're not all that different. He said there's a similarity between low-income families trying to stretch scarce food dollars with high-calorie processed foods, "and youngsters who are just flat out not getting fed because their parents don't have the resources to feed them."

Cassidy said he wasn't sure he followed that reasoning. And he might still be confused if he took a trip to the Williamsons' kitchen in Carlisle, where contradictions swirl about like stew. The refrigerator and pantry are often filled with food -- but the family sometimes has to go to the local soup kitchen to make ends meet.

Hard To Make Good Decisions When You're Hungry

When asked, Alex says he worries about food all the time, and that he's always hungry. But later, he admits he has enough to eat. It's just not always what he wants. He says he especially doesn't like it when his mother makes Brussels sprouts for dinner.

"He more or less just worries about if there's going to be enough food that he likes or if we have something that he likes," she says. "He's really picky about what he wants."

As Beanna talks, Alex goes to the refrigerator for some chocolate. He gets upset when his sister tells him he can only have one piece.

It's not that uncommon for an 8-year-old to prefer chocolate over Brussels sprouts. But Livas, of the local food pantry, says a good diet is especially important for the poor, as a first step toward addressing their other problems, with things like work, health care and education. She says it's hard to make good decisions when you're hungry.

Livas says there's something else to consider. As the nation becomes more health conscious, she's noticing less healthy food coming to her pantry. She's getting more sugar-coated cereals, for example, than the high-fiber ones she used to receive.

"We can't really complain that the poor are heavier, when what we're donating is our kind of castaways," she says.