Accessibility links
NBC's Guthrie: A Case Study In New News Norms The paper-or-plastic choice for today's network-TV stars: Cling to the nightly news ideal of impartiality -- or build an audience on a cable news outlet by taking a sharper, sometimes overtly ideological tone. Rising NBC star Savannah Guthrie is trying to walk that line without stepping across it. 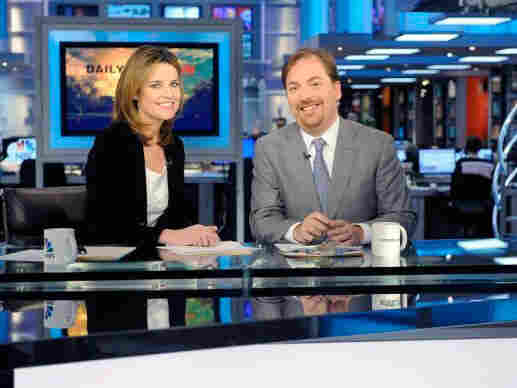 The story of NBC's Savannah Guthrie illustrates the new complexities that surround the modern network TV-news journalist. After a relatively short stint as a correspondent, Guthrie has emerged as a rising star. She's one of NBC's primary White House correspondents, appearing on its most popular news programs; she's also the co-host of a weekday-morning political show, The Daily Rundown, on the network's cable sister station, MSNBC.

"I'm constantly blown away by her range," says an admiring Steve Capus, president of NBC News. "She's had a very quick rise within the organization [and] has absolutely earned respect every step of the way."

Guthrie, 38, offers a resume crackling with credentials. She was a local TV reporter who sought greater challenges by going to law school. After she graduated from the Georgetown Law Center, she earned the very top marks of the 634 people who took the bar exam in her native Arizona in July 2002, according to the state Supreme Court. She kept her hand in the news business by doing some reporting at WRC-TV, Washington's NBC station, and after a relatively short stretch as a lawyer, she plunged back into TV.

She covered the trials of Sept. 11 conspirator Zacarias Moussaoui, vice presidential aide Lewis Libby and others as a top legal reporter for Court TV. She says her legal training helps her as a journalist. Her goal, she says, is always "to try to think of the one question they would rather not be asked, just to see what they would say."

"I don't have a dog in the fight," Guthrie says at her office in Northwest Washington, D.C., just a few miles north of her law school. "I'm just trying to figure out where the strongest arguments are, where the weak spots are, and I'm trying to approach it that way."

These days, that may put her in the minority.

Report It Straight, Or Ride The Argumentative Tide?

It used to be that network correspondents had to decide whether they wanted to burnish their hard-news chops or slide into the softer fare of morning shows such as NBC's Today Show or ABC's Good Morning America. But thanks to Katie Couric, Charles Gibson and Diane Sawyer, network-TV stars have shown they no longer have to choose. Guthrie has even started to fill in as a newsreader for the money-printing Today show, one of NBC's most important properties, and as a weekend anchor.

Nowadays, the paper-or-plastic question involves whether to seek a network presence, with more viewers and a chance at a bigger payoff, or cable prominence, with more chances of personal recognition. NBC News holds a unique place in broadcast journalism in that it offers both: It has a network news division that clings to the concept of journalistic impartiality, but its sister cable channel MSNBC only found ratings success with a prime-time ideological tilt -- in its case, toward the political left.

On cable, many of the more successful personalities find themselves standing out by adopting a sharper tone. Guthrie says she harbors no such desire, though the cable network on which she appears daily has won its greatest ratings successes by doing just that.

"I know what everybody says," Guthrie says, "but ... we just do straight news, and no one has ever asked me to do anything other than that."

Former CNN anchor Campbell Brown quit her prime-time perch earlier this year, bemoaning what she said was her inability to make headway in the ratings against the more openly opinionated Bill O'Reilly of Fox News, Keith Olbermann of MSNBC and victims' advocate Nancy Grace of HLN, a sister channel to CNN.

Megyn Kelly, a news anchor, is also seen as a rising star -- in her case, at the Fox News Channel. In recent months, she has taken on a noticeably sharp tone. Recently, Kelly tore into Fox's own Democratic analyst, Kirsten Powers, over allegations of voter intimidation by members of the New Black Panthers at a polling station on Election Day 2008. Kelly told Powers more than once, "You don't know what you're talking about," and threatened three times to cut off her guest's microphone.

"This is what I teach students here: Keep your biases to yourself," says former CNN and ABC News correspondent Charles Bierbauer, now dean of communications at the University of South Carolina. "I don't want to know what they are when I go to the news. If I want opinions, I go to the editorial page, or I turn on one of the political food fights. But [there] I know what I'm getting."

"The format looks like news," says McGinnis, now associate dean of journalism at Stony Brook University. "You've got anchors. You've got people talking to reporters in the field. And I think viewers might be taken in by the fact that it looks so much like a news show."

NBC's Steve Capus argues that viewers understand the difference between shows with a lively political mix and those offering an ideological take.

And he says he's been very careful not to push Savannah Guthrie in that latter direction, saying it would be a waste of her talent.

But Capus is also not apologetic about MSNBC's hybrid identity. As he acknowledges, it took a long time for his cable channel to hit on a successful formula.