Accessibility links
The Fresh Air Interview: Robert Duvall, From 'The Godfather' to 'Get Low' The Academy Award-winning actor details some of his most memorable roles, including his portrayal of Tom Hagen in The Godfather and Lieutenant Colonel Bill Kilgore in Apocalypse Now. He also describes his latest role, a hermit planning a "living funeral," in the upcoming film Get Low. 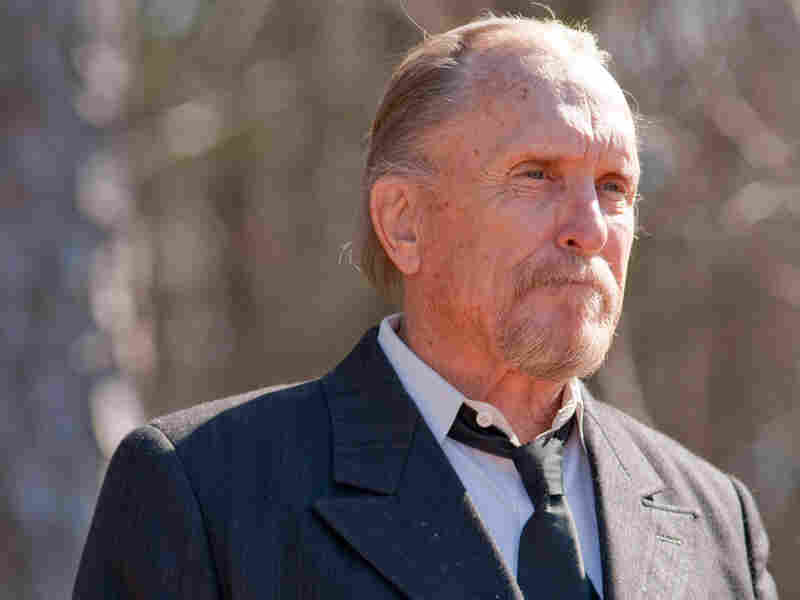 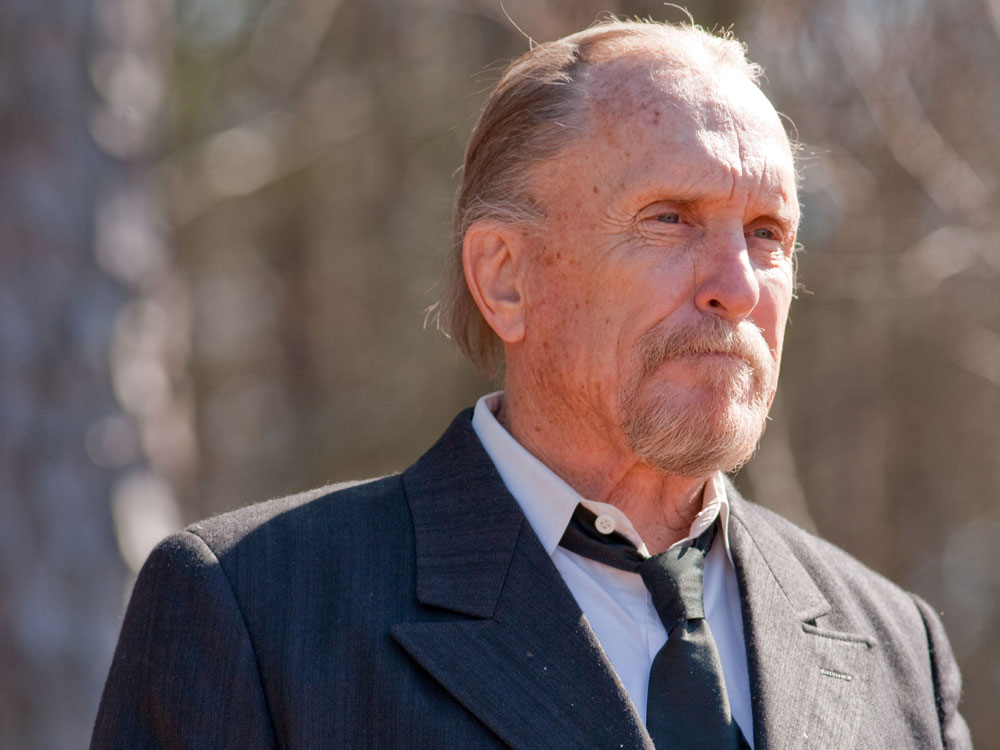 Felix Bush (Robert Duvall) plans a "living funeral" for himself in the drama Get Low.

In the new film Get Low, Robert Duvall plays Felix Bush, a secretive recluse who eschews almost all human contact and lives alone in the woods, fueling rumors among townspeople that he's hiding some terrible deed in his past.

One day, Bush comes out of the woods and announces to his town that he wants to stage a public, living funeral -- complete with mule, hearse and coffin -- before he actually dies. And as it turns out, Bush does in fact harbor a deep secret -- one that sent him into his self-imposed exile -- which he decides to reveal before his living funeral ends.

Duvall tells Fresh Air's Dave Davies that he infused Bush with a voice and style he modeled after several of his own relatives who grew up in the Deep South.

"I didn't really go for an accent," the 79-year-old actor says. "I just went for a flavor from my father's people -- the farming people from Virginia."

Duvall says that filming on location in Georgia also added a needed dimension to the film.

"The extras we got -- they would come at 4 a.m. and stay until 8 p.m. -- there were maybe 1,200 to 1,600 of them," he explains. "We got these extras where it was the first time they were in a movie. In Hollywood, they have the trade magazines and they come in, and ... there's a certain kind of jaded quality. [Whereas] these people were very fresh. They added a wonderful voice themselves to the movie."

Duvall's other films include To Kill a Mockingbird, M*A*S*H, Apocalypse Now and The Godfather. He received an Academy Award for his role as Mac Sledge in the 1983 drama Tender Mercies and he delivered a riveting performance as the philosopher/cowboy Gus McCrae in the TV adaptation of Larry McMurtry's novel Lonesome Dove. He has also received two Emmy Awards and four Golden Globes, and was awarded a National Medal of Arts at the White House in 2005.

"I told Horton when I was doing this movie and I wanted him to see it because it had reminded me a lot of his work. It's really kind of like a Horton Foote movie but he never got to see it. But he seemed to be there in that scene, when I was doing that [final] speech."

On playing Tom Hagen in The Godfather

"A third of the way through [the original] Godfather, I said, 'This is going to be pretty important.' I gained a lot of respect for Coppola, because they had a standby director on the set whose best friend was the first assistant director under the auspices of the studio in case Coppola failed -- [because they planned to] fire him. And I gained a lot of respect for Coppola for working under those conditions. I can remember when the film was finished and we had a party, and there was a wonderful buzz, and a wonderful feeling around the whole film."

"I was in the Army as a draftee, and I didn't ever know a guy like that. But out of curiosity, I would watch the special service officers -- the way they stood -- and when I got over there, they had the character's name as [Lieut. Col. Bill Carnage] and they changed it to Kilgore."

"In Texas, wherever you go, people watch it once a year, it's really like a special thing for the people of Texas. It really, really is. And I'm proud of that. ... The English, they have Shakespeare. Russians have Chekhov. South America, they have Borges in Argentina. But the Western is ours, really. And everybody says 'When you gonna make more Westerns?' And they make them, sporadically."