Accessibility links
Shop That Inspired 'Soup Nazi' Reopens In N.Y. Immortalized by a Seinfeld character, the Original SoupMan returned to Midtown Manhattan Tuesday, drawing a long line. But the soup man himself -- Al Yeganeh -- did not make an appearance. 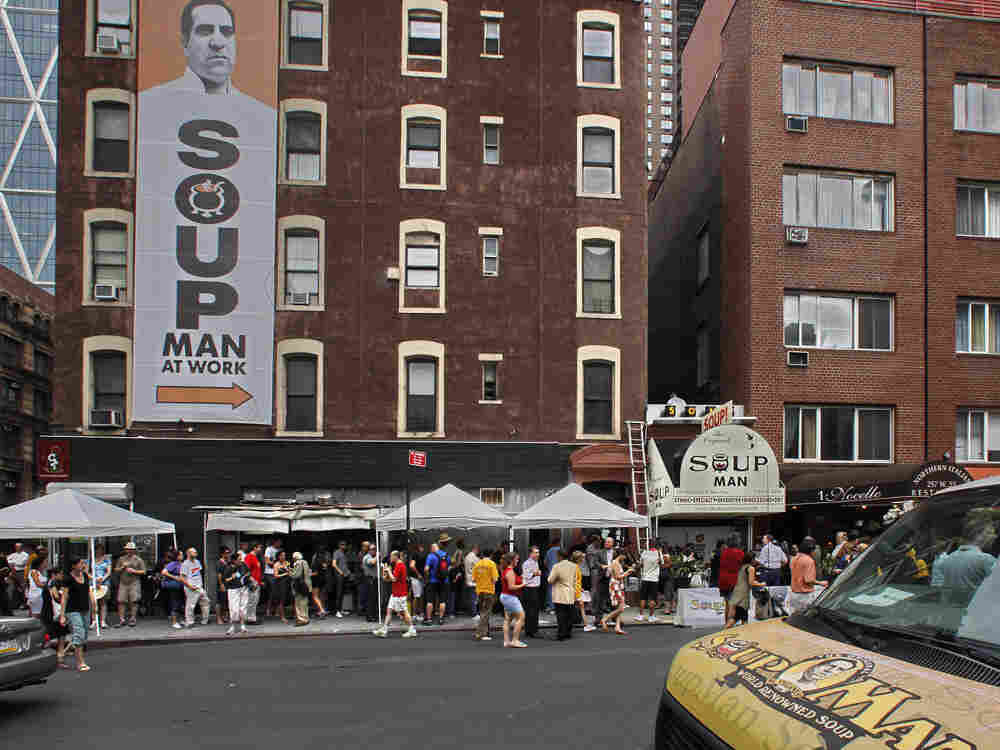 About 100 people stand in line for the reopening of the Original SoupMan gourmet takeout shop. Bebeto Matthews/AP hide caption 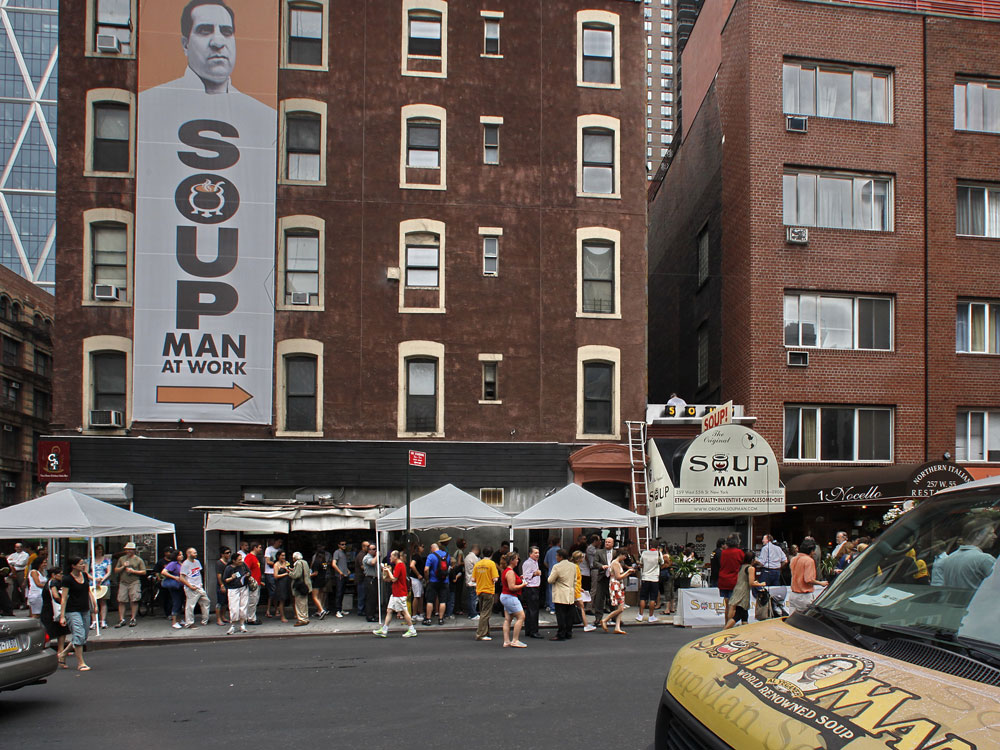 About 100 people stand in line for the reopening of the Original SoupMan gourmet takeout shop.

There was a line around the block, but the soup man himself -- Al Yeganeh -- was unavailable. He has never been amused at his portrayal in the sitcom and the media.

In the real world, there are 22 Original SoupMan stores these days, but the faithful say there is only one that counts.

Tuesday they lined up around the block, eager for hot soup on a day with temperatures close to 90. The president of the company, Robert Bertran, had this to say about the weather: "There is no season for soup. People eat soup all year."

Yeganeh neither owns nor operates the store now. Like other Original SoupMan stores around the country, it is a franchise. (Bertrand told The Associated Press Yeganeh remains involved in the business.)

A while back, The Wall Street Journal published a list of rules for interviewing Yeganeh. They included: No tabloids, no use of the "N" word -- as in soup Nazi -- no personal questions, no follow-up questions.

In the past, Bertran said, Seinfeld himself couldn't get through the door.

"Jerry has come to his store a couple of times when he opened, and he wouldn't let him in," Bertran said.

Bertran said he didn't know whether Yeganeh would show up Tuesday, either.

"I can't answer that," he said. "We have asked him if he is coming; he has not said he is coming and he has not told us he is not coming. He could be here right now. He only lives about four blocks away."

In the sitcom, Yeganeh is portrayed as a crazy authoritarian, rejecting Seinfeld with the brusque signature line "no soup for you."

Yeganeh hates the phrase, as well as the term "soup Nazi." On CNN three years ago, he said his product didn't need "that clown" Jerry Seinfeld -- it spoke for itself for a quarter of a century.

But on the line, Seinfeld was the reason many had come, including Dan Lise, visiting from Australia.

"I've gotta try that soup; it's something you've gotta do," Lise said, adding that he has seen the "soup Nazi" episode probably 50 times.

Dan Hank, a film producer from the Upper West Side, said he had come to the SoupMan for 10 years before Seinfeld. He was going for the lobster bisque. And when he got it, he wasn't disappointed.

"The older restaurant had larger chunks of lobster in the lobster bisque, but when it comes down to it, it is really about the flavor, and the flavor of this is as it was the last time he was at this location," Hank said.

The non-appearance of the soup man was clearly an attempt to focus on the soup. And for some, it worked.