Accessibility links
Foes Of Arizona Immigration Law Get Day In Court A federal judge will hear two lawsuits Thursday that seek to block Arizona's new immigration law from taking effect next week. One focuses on the idea that the law will promote racial profiling; the other, brought by the U.S. Justice Department, says that only Congress, not states, can enact immigration laws. 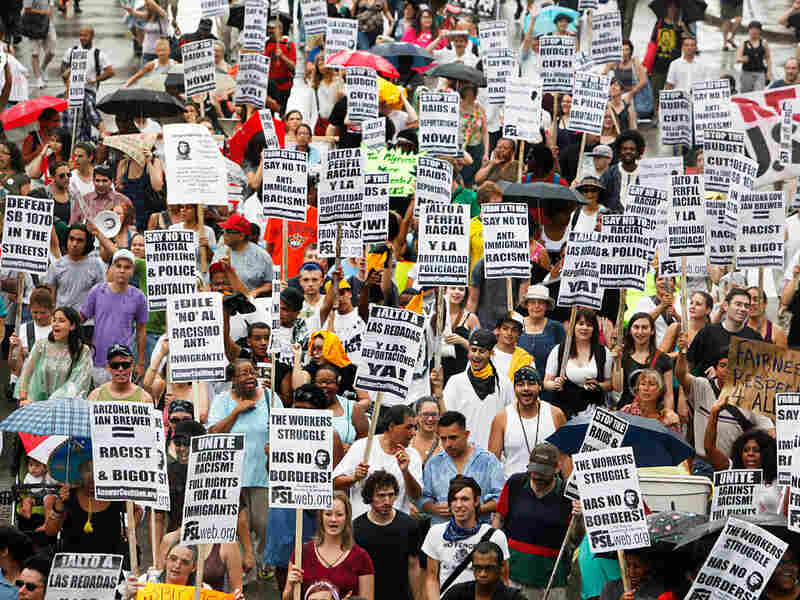 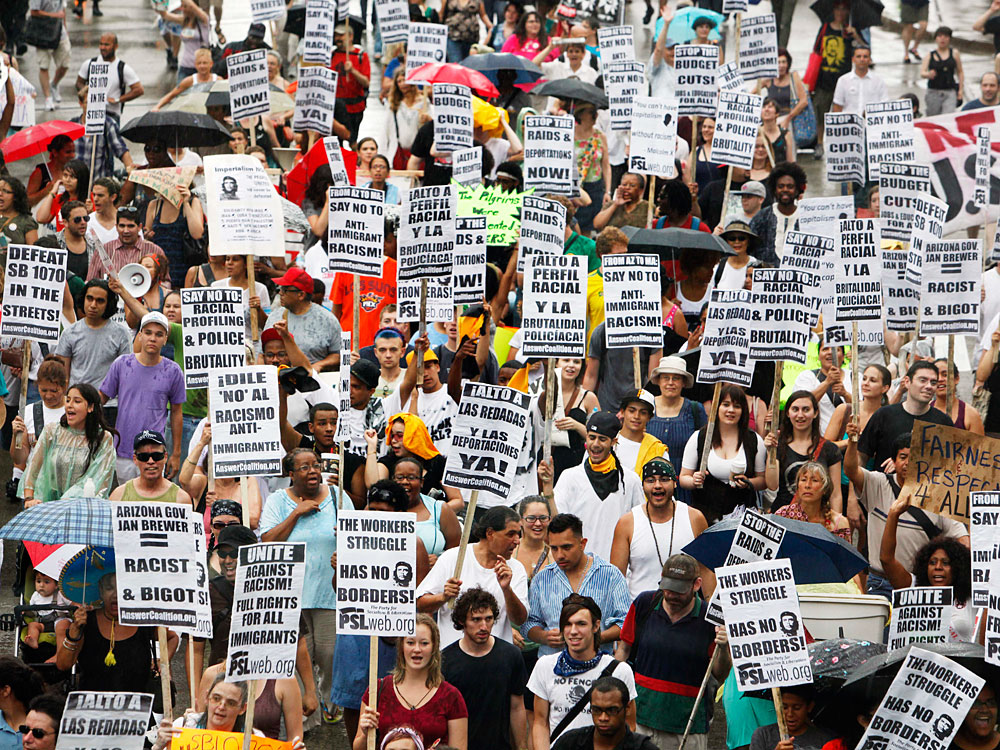 A federal judge in Phoenix will hear what may be the two strongest challenges to Arizona's immigration law Thursday. The new law requires local police to verify a person's status during any stop if there is reasonable suspicion that the person is in the U.S. illegally.

The two lawsuits are seeking an injunction to keep the immigration law from taking effect next week. One focuses on the idea that the law, known as SB 1070, will promote racial profiling; the other, brought by the U.S. Justice Department, says that only Congress, not states, can enact immigration laws.

Arizona's law is scheduled to take effect on July 29. Groups opposed to it are calling for a general strike across the state, and they are asking people to refuse to show identification if police question them about their immigration status.

Seven lawsuits have been filed against the immigration law, but only three seek to keep it from taking effect as scheduled. Federal Judge Susan Bolton heard one of them last week without ruling.

The highest-profile case is U.S. v. Arizona, the suit that calls the Arizona law unconstitutional. It cites the legal doctrine known as pre-emption -- in this case, that the Constitution gives only the federal government the power to naturalize citizens.

Immigration law flows from that power -- a view that has been backed up by more than a century of case law.

Attorney General Eric Holder told NBC News last month that he is worried about a precedent allowing what could be 50 different laws regulating who is in the country legally.

"Our immigration system is broken in many ways," Holder said then, "and I think it requires a national solution. A concern I have is trying to do it state by state."

Holder also suggested that the Arizona law will lead to racial profiling -- something not mentioned in the Justice Department's lawsuit. But race is mentioned in the other lawsuit Bolton will hear, which was brought by a coalition of civil-rights and immigrant-rights groups.

The use of race as a basis for stopping someone is actually prohibited by an amendment to SB 1070. But Thomas Saenz, president of the Mexican American Legal Defense and Education Fund, says that people questioned under the Arizona law will inevitably be Hispanics who are legal residents and U.S. citizens.

"Many of the people who will be swept up in the dragnet will be unable to present appropriate identification to satisfy law enforcement, and will be swept into detention facilities wrongly and against our Constitution," Saenz says.

Meanwhile, police and sheriff's deputies, along with state highway patrol officers, are training to enforce the new law. And however Bolton rules, it's likely the dispute will head to the 9th Circuit Court of Appeals.