Accessibility links
A Handy Bunch: Tools, Thumbs Helped Us Thrive The evolving anatomy of the human hand gave humans great dexterity and fine motor skills. With these advances came the ability to make stone tools and primitive knives. Anthropologists are now studying how our ancestors learned to make tools, and how these tools shaped our bodies. 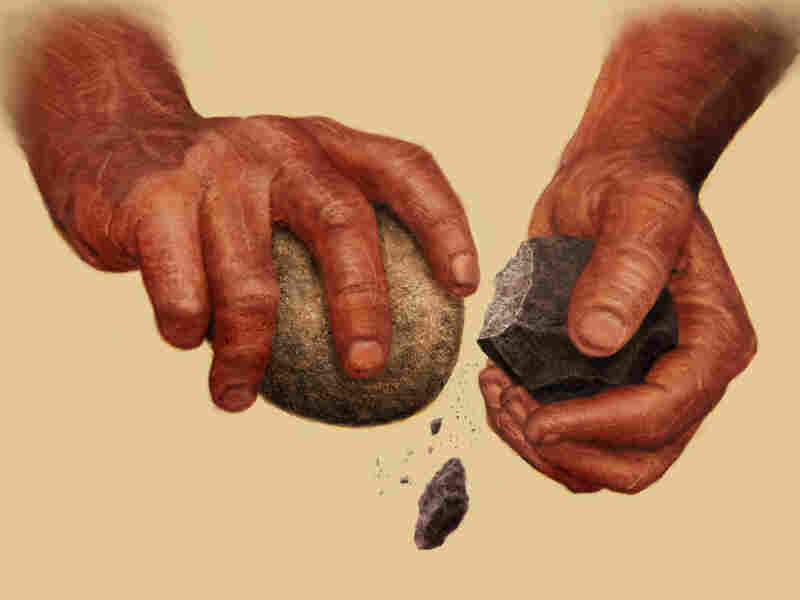 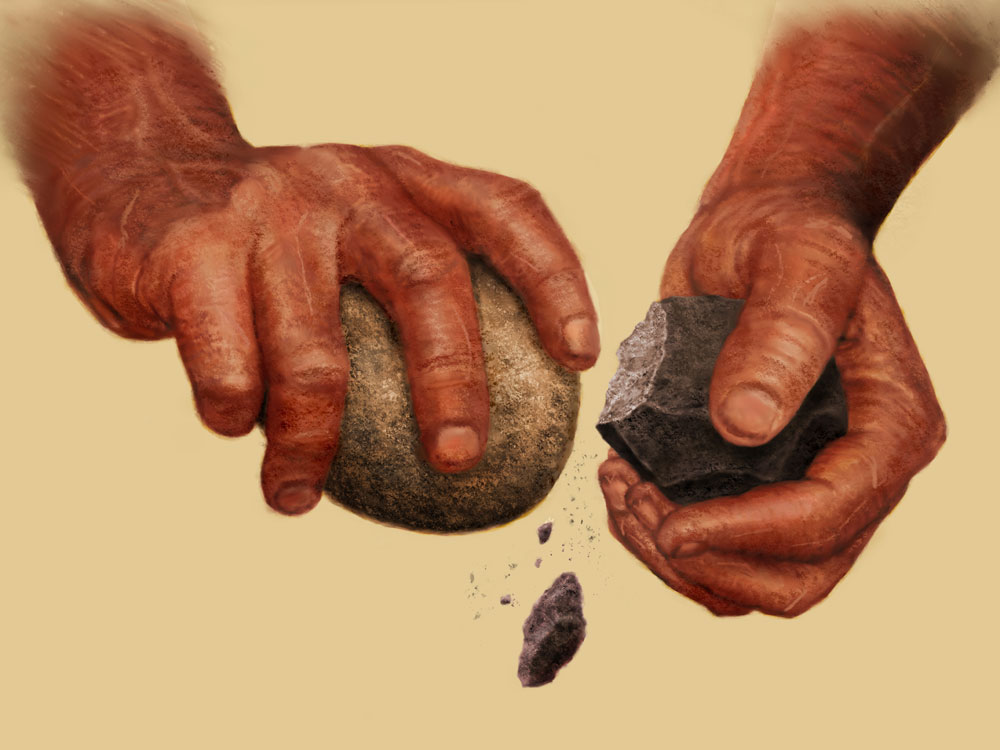 A flint-knapper makes sharp stone flakes by striking a flint "core" with a hammerstone.

You could say human evolution started when the first brave ape came down from the trees. But scientists have long said that it was making tools that really set humans apart.

And if tools define our species, then it's our hands we have to thank.

It took millions of years for our hands to go from grasping tree limbs to writing poetry. And scientists believe that making stone tools helped propel that evolution.

At George Washington University, anthropologist Erin Marie Williams is trying to find out how that evolution took place. How did tool-making help shape our hands and wrists? She studies flint-knapping -- the art of making stone tools the way our ancestors did.

"Everything that made us human was arguably given this big push by using stone tools," Williams says, "and so I'm trying to see what it is about our anatomy that allowed us to be good at it compared to other species that weren't good at it." 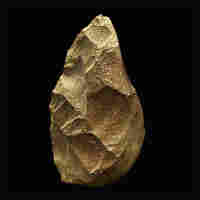 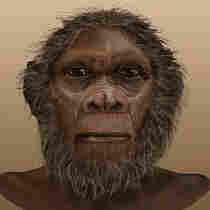 Timeline: What Does It Mean To Be Human?

Her flint-knapper today is Dennis Sandgathe, an archaeologist from Simon Fraser University in Canada.

He sits on a chair in a windowless laboratory and cradles a large rock, or core, of jet-black flint in his left hand. In his right hand he grasps a round, smooth hammerstone as if it were a baseball.

He swings the hammerstone and whacks the core.

A flake leaps off and falls to the ground. Each flake is razor sharp. These were the first knives.

"The angle at which I strike this will have a major effect on the result," he says. "There is certainly math behind it, but typically when you are knapping like this, it's more experience and intuition." Usually, he adds with a laugh and a nod at his bloody fingers, "it involves a little bit of blood."

Williams translates Sandgathe's intuition into science by filming hundreds of hours of knapping and analyzing the knapper's movements on a computer.

Today, she notices that Sandgathe snaps his right wrist forward when he strikes the flint. That's a clue. It could be that some quirk of human anatomy -- say, the way the wrist bones are configured or how the thumb is shaped -- allows him to do that especially well. If so, when did that quirk first appear in our ancestors?

If a physical change like that led to better toolmaking, then its owner would have survived better. Tools mean more meat and protection, so the changes in the body that helped make better tools, stuck.

Those early humans were probably Homo habilis, which means "handy man." Homo habilis appeared about 2.5 million years ago, and is thought to be the first human.

Handy man made tools, but they were crude. That could be because his wrists and hands were still pretty ape-like. Now, apes make tools. Scientists have trained a bonobo, called Kanzi, to do that. But Kanzi's not much good at it.

"He just can't get the motions down," Williams says. That's because he can't grip the stones, his thumbs aren't long enough and his fingers are too long and he's clumsy. He can't move his wrists -- he can't extend his wrist and get this important "snap." He makes a mess.

An ape's brain is up to the task, but his anatomy isn't. He doesn't have the hands. It took millions of years of evolution to produce the hands of a skilled flint-knapper like Sandgathe.

You can see the "before and after" picture of that evolution at the Smithsonian Institution's Museum of Natural History.

Anthropologist Caley Orr says he grew up skateboarding, but now he prefers hands to feet. "My wife is constantly telling me to stop looking at her hands or mentally dissecting her forearm," he says.

On an office table, Orr has laid out the skeletal hands of three apes and a human. The apes' hands are enormous -- the orangutan's is like a catcher's mitt. 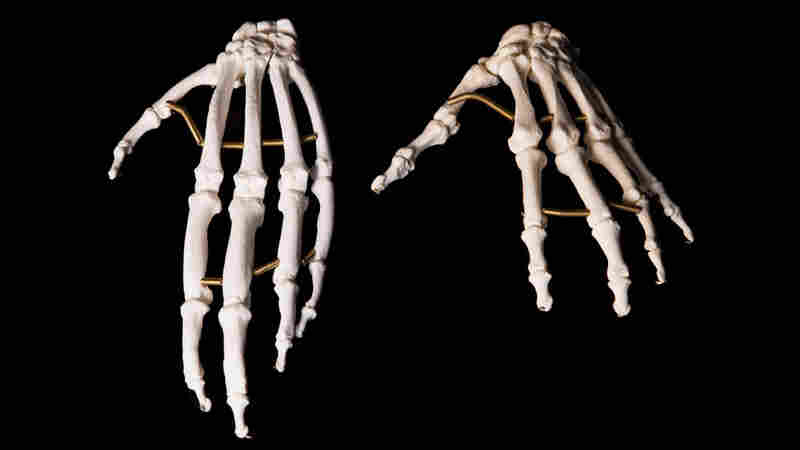 An ape's fingers are long and good for hanging from branches, while the human hand (right) has a long, strong thumb that makes the hand more versatile. Maggie Starbard/NPR hide caption 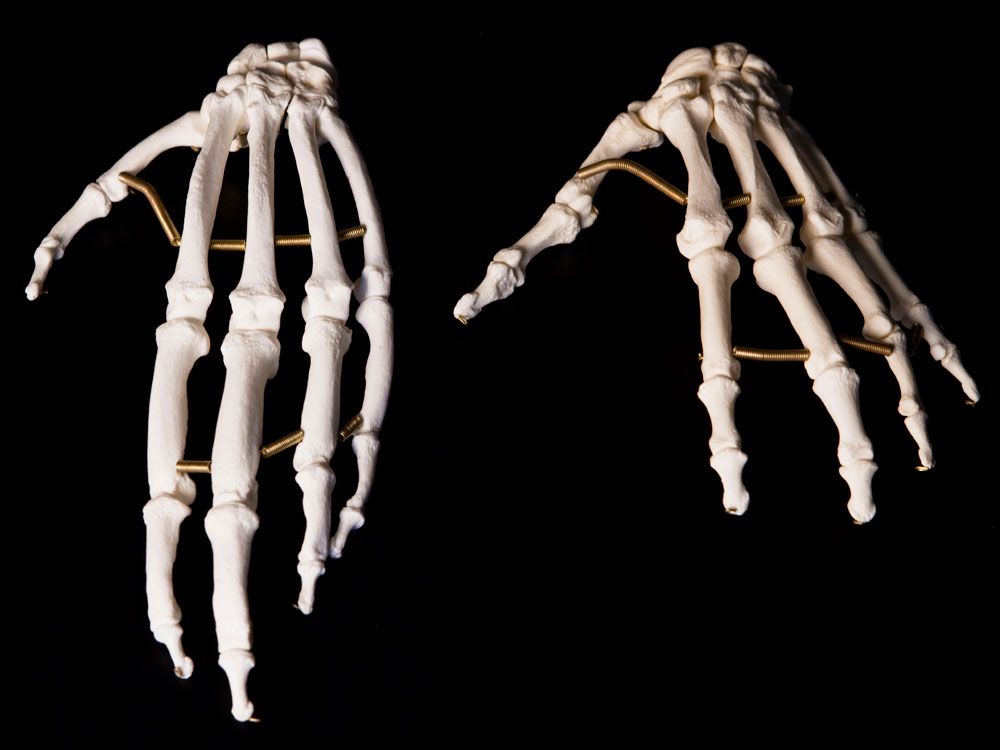 An ape's fingers are long and good for hanging from branches, while the human hand (right) has a long, strong thumb that makes the hand more versatile.

But their thumbs are tiny and splayed out to the side; the fingers are long and curved. They look powerful, but Orr says the strength runs vertically, from the wrist up through the fingers. That's good for hanging on tree limbs, but not for much else.

The human hand is smaller, and it works differently. Orr hands me a two-foot-long club to illustrate.

"Here, try to hold this without using your little finger, and just using those other digits," he says. That's the way an ape might hold it. I make to swing it but realize it will fly out of my hand if I do.

The strength in my hand extends across my palm. My thumb is stronger, and so is my pinky. I can wrap that thumb over my other fingers and then secure the grip at the bottom with my pinkie. An ape can't manage that very well.

And my opposed thumb and wider fingertips also mean I can grip a round stone -- like a hammerstone -- with more control than an ape can.

I have the hand of the ultimate toolmaker.

To truly see it, though, requires dissection -- something I'd prefer not to undergo quite yet.

So Williams takes me to the gross anatomy lab at George Washington University's medical center. She unzips a body bag to reveal a cadaver, donated for research. With a scalpel held delicately in her right hand, she reaches over with her left to show what millions of years of evolution has produced.

"When I flip the arm over so that the palm is up you can see, underneath these tendons, that we have just a ton of muscles that are just in our palms that help us finely move our fingers."

It's a spider's web of muscles and tendons under the skin, many of them unique to the human hand. The hand's exquisite architecture allows us to play Bach, shuffle a deck of cards, or write poetry -- the things we often think of that define us as human. And all it took to get it was a few million years of whacking two rocks against each other.