Accessibility links
USDA Offers New Job To Official Ousted In Race Flap Shirley Sherrod was asked to resign this week after a conservative website posted a video clip in which she appears to admit racism against whites at an NAACP banquet. But the clip didn't show the whole story -- one in which Sherrod describes overcoming her initial bias to realize that race is not what's important. 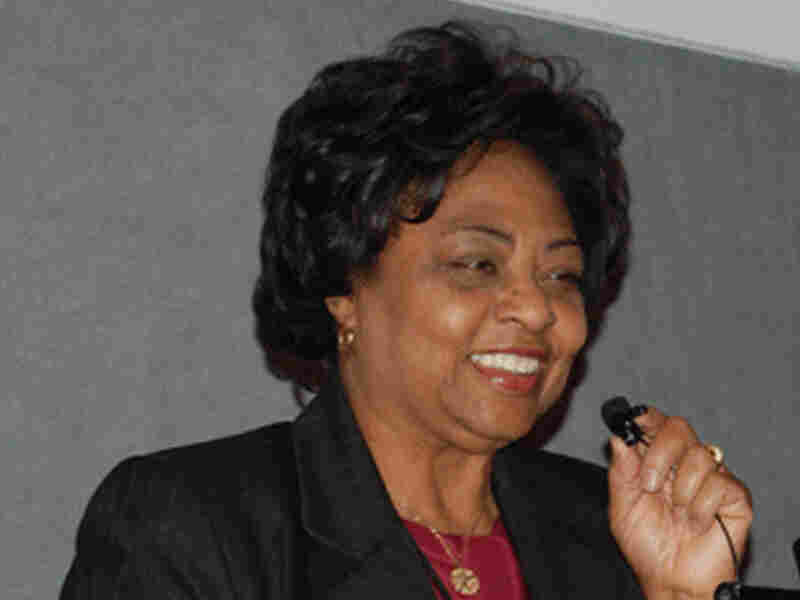 An undated photo provided by the U.S. Department of Agriculture shows Shirley Sherrod, who resigned this week after a conservative website posted a video clip in which she appeared to admit racism against whites. USDA/AP hide caption 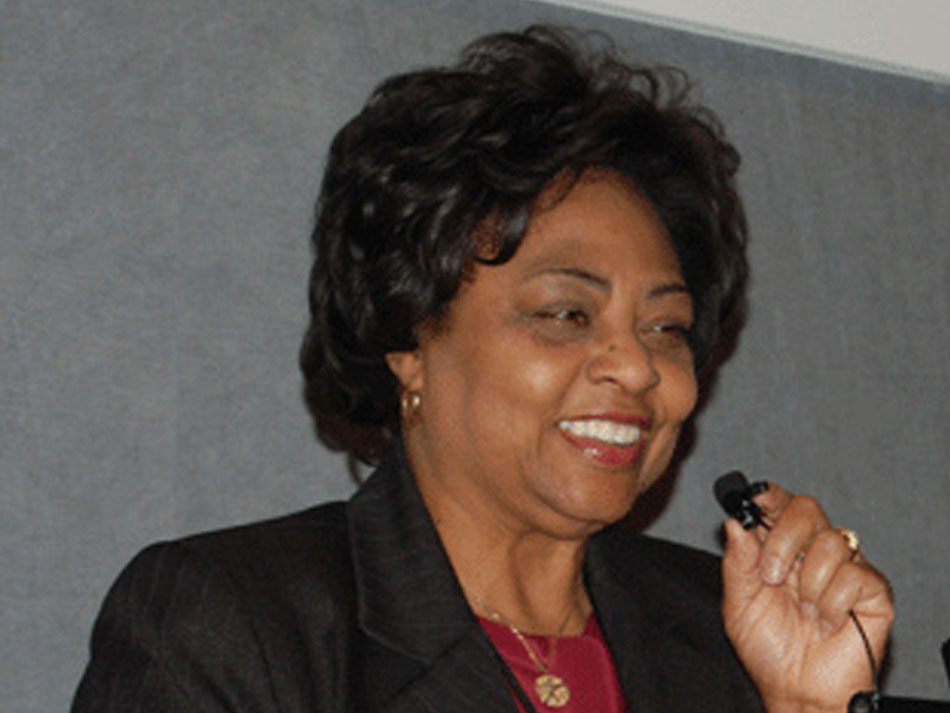 An undated photo provided by the U.S. Department of Agriculture shows Shirley Sherrod, who resigned this week after a conservative website posted a video clip in which she appeared to admit racism against whites.

Agriculture Secretary Tom Vilsack said Wednesday he has apologized to ousted employee Shirley Sherrod and offered her a unique new position at the agency.

In an interview with The Associated Press, Sherrod said she was considering it.

"They did make an offer," she said. "I just told him I need to think about it."

Vilsack told reporters that Sherrod accepted his apology. He said, "She was extraordinarily gracious."

The new job offer comes after an embarrassed White House apologized to Sherrod for ousting her as state director of rural development in Georgia over her remarks about race to an NAACP banquet earlier this year. White House spokesman Robert Gibbs said the administration did not know all the facts when it acted.

The Sherrod Ouster And Fallout For The White House

The Sherrod Flap And Fallout For The White House

When asked Wednesday if he had spoken with President Obama, Vilsack said simply, "No."

Vilsack insisted that it had been his decision to seek her resignation and said he takes full responsibility.

"This is a good woman," Vilsack said. "She's been put through hell."

The controversy was sparked by the conservative website BigGovernment.com, which had posted a two-minute video clip in which Sherrod appears to admit racism against whites.

"Here I was faced with having to help a white person save their land. So I didn't give him the full force of what I could do," she says in the video.

It was a potent clip -- even more so because she was speaking at an NAACP event, and the audience seemed to be eating it up.

Days before the video was released, the NAACP had denounced racist elements in the Tea Party.

In an interview with NPR on Monday, Andrew Breitbart, who runs BigGovernment.com, railed against what he regards as unfounded allegations of racism within the Tea Party.

"What is American is innocent until proven guilty," he said. "What is un-American is guilty until proven innocent, and in this particular instance with the left media, they will not even give you the platform to prove your innocence, and that is what the Tea Party is so upset about." 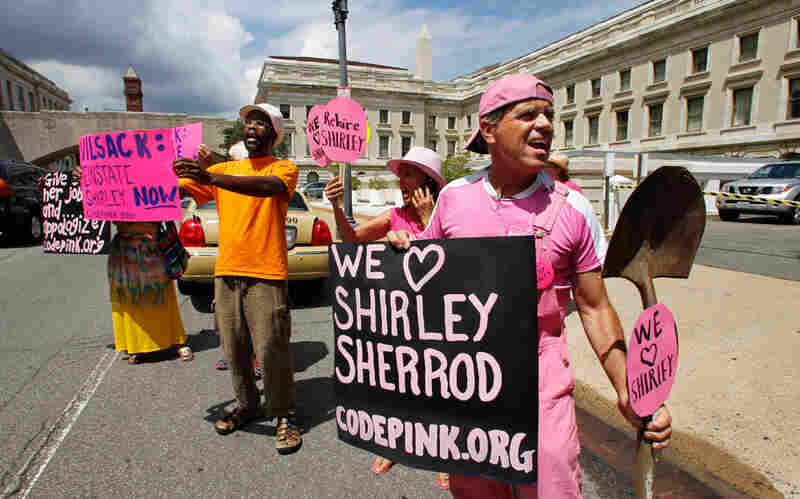 Demonstrators demand that Sherrod be reinstated at a rally outside the Department of Agriculture building in Washington. Manuel Balce Ceneta/AP hide caption 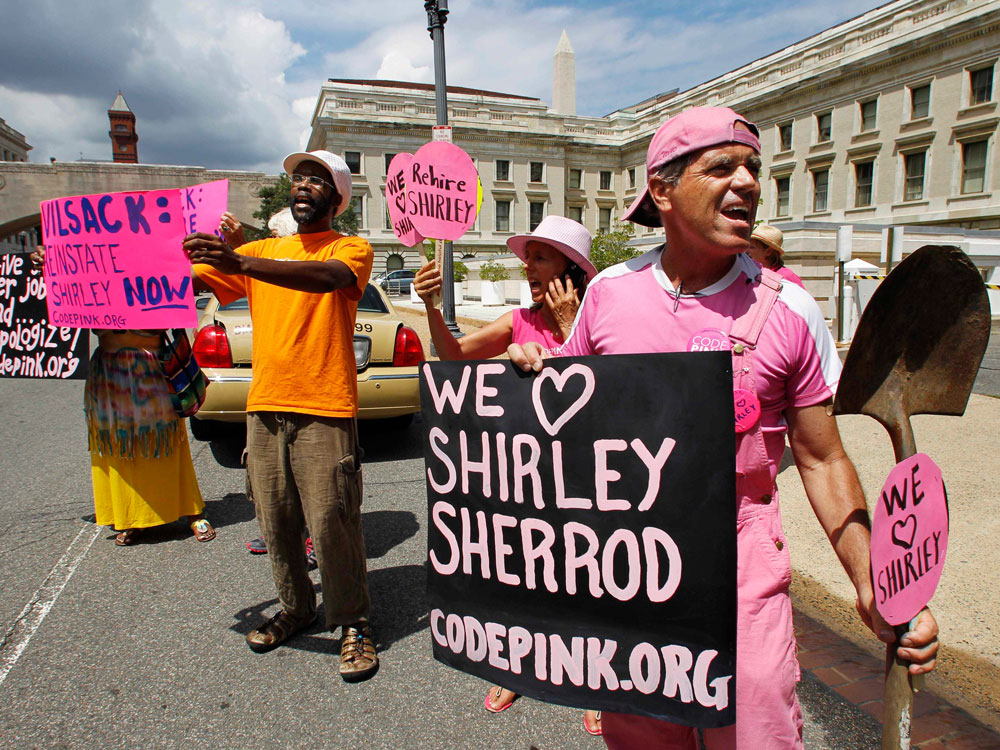 Demonstrators demand that Sherrod be reinstated at a rally outside the Department of Agriculture building in Washington.

"Because a farmer was white, she doesn't extend the full helping hand to him. And she's touting this in this anecdote, as though this is a feather in her cap somehow, for her to be congratulated," anchor Alisyn Camerota said on Fox and Friends.

Responding swiftly, the Department of Agriculture asked for Sherrod's resignation, and she complied. White House officials said they were not behind the decision, but they supported it.

The NAACP released a statement taking a similar position on Sherrod, saying, "We are appalled by her actions."

But Tuesday, the video of the full 40-minute speech was released, showing a very different story.

Later in her speech, Sherrod describes overcoming her initial bias to realize that race is not what's important.

It was a redemption story.

The white farmer she was describing, Roger Spooner, went on CNN to call the criticism of Sherrod "hogwash."

"She was unbelievable, helpful in every way. She saved our farm, she did," he said.

On Wednesday, everyone was backpedaling.

Even though the NAACP had the full video footage when it first supported Sherrod's firing, the organization put out a new statement saying, "We have come to the conclusion we were snookered by FOX News and Tea Party activist Andrew Breitbart."

The issue dominated Wednesday's White House briefing, where spokesman Robert Gibbs apologized to Sherrod on behalf of the administration.

And at the end of the day, Secretary Vilsack called Sherrod to offer her a job.

In the past year and a half, there has been a pattern of conservative activists blurring the line between journalism and advocacy, and doing it with striking success.