Accessibility links
Beijing Finds Common Cause With Chinese Buddhists In recent years, China's communist government has taken a new, proactive approach to religion. In particular, it has bolstered support for Buddhism, which provides needed charity work and financial aid — and also serves as a counterweight to the explosion of Christianity in China.

Four years ago, eight senior monks, clad in scarlet-and-saffron-robes, filed in front of a golden Buddha and began chanting on stage in the eastern Chinese city of Hangzhou. It marked an important turning point in China's attitude toward religion.

This was the first World Buddhist Forum, attended by more than 1,000 monks, and held in China. Never before had the officially atheist country sponsored such a large religious conference.

The moment signaled Beijing's new proactive approach to religion and, in particular, its support for Buddhism, possibly as a counterweight to the explosion of Christianity in China.

Tensions still remain in Beijing's relationship to Tibetan Buddhism, particularly given believers' loyalty to their exiled spiritual leader, the Dalai Lama. He is viewed by the Chinese government as a "splittist," with the aim of dividing China.

But Chinese Buddhism is not seen to be politically problematic in this way.

Some academics estimate there are 20 million Buddhists in China, and Buddhism has been at the forefront of the changing role of religious institutions, particularly when it comes to charity. 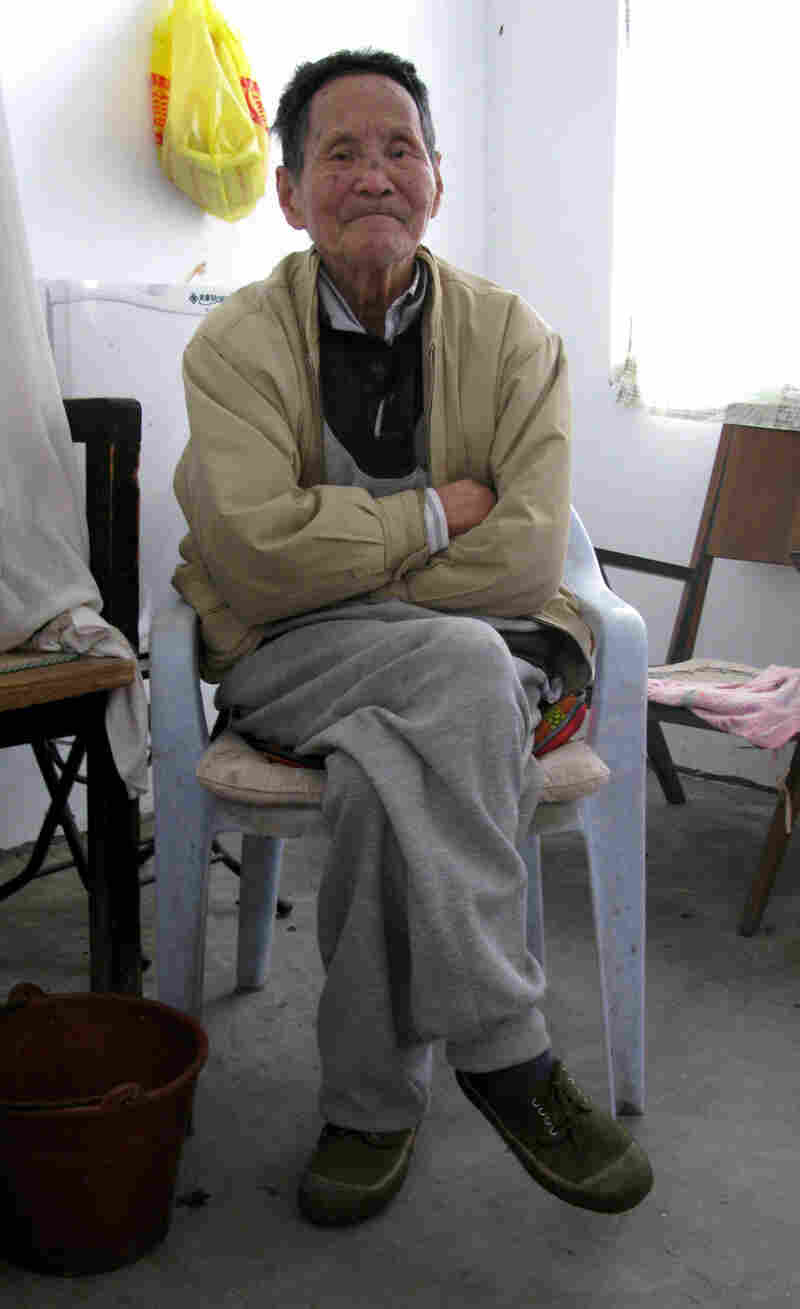 Leprosy patients who live in a small hospital on a hillside outside Xiamen receive donations every year from the Nanputuo Temple foundation. Many of the patients have lived in the hospital for decades after being abandoned by their families. Over the past 16 years, the Buddhist foundation has given out a total of about $7 million in aid. Louisa Lim/NPR hide caption

A Pioneer In Buddhist Charity Work

Monks from Nanputuo Temple, a monastery with a thousand years of history in the southeastern coastal city of Xiamen, led the way. In 1994, they set up the country's first Buddhist philanthropic foundation, says the Venerable Zhengxin, an official with the foundation.

"This motivated other Buddhist organizations to take part in charitable work," he says.

The foundation is now one of the most developed religious funds in China, with annual audits, a newspaper and a magazine.

Much of its income comes from its 45,000 members, who each donate about a $1.50 per month. One office worker, surnamed Lei, admits he joined as a result of peer pressure.

"A friend of mine was giving money to the fund," he says, "and I was influenced by him."

Donations are growing, as people have more disposable income: According to the foundation's own figures, donations grew by more than 11 percent in 2009 compared to the previous year. And the foundation is spending ever more as well, with total expenditures last year of almost $1.75 million.

Over the past 16 years, Nanputuo's foundation has given out a total of about $7 million in aid. That adds up to free medical aid for 210,000 people, 25 new schools and repairs for 67 other schools.

"Each project requires a survey, and we depend on [local officials from the] State Administration for Religious Affairs for that. They'll look at how much a place is suffering or the cost of medical equipment or whatever," she says. "Each project we've done in our 16-year history has been inextricably linked with the local government."

Such cooperation with religious institutions marks a significant advance from the Chinese Communist Party's recent turbulent history of religious intolerance.

Four decades ago during the Cultural Revolution, all religious worship was banned, including Buddhism. Temples were destroyed or turned into factories or storage facilities, precious relics were destroyed and monks were imprisoned, and in some cases even killed. 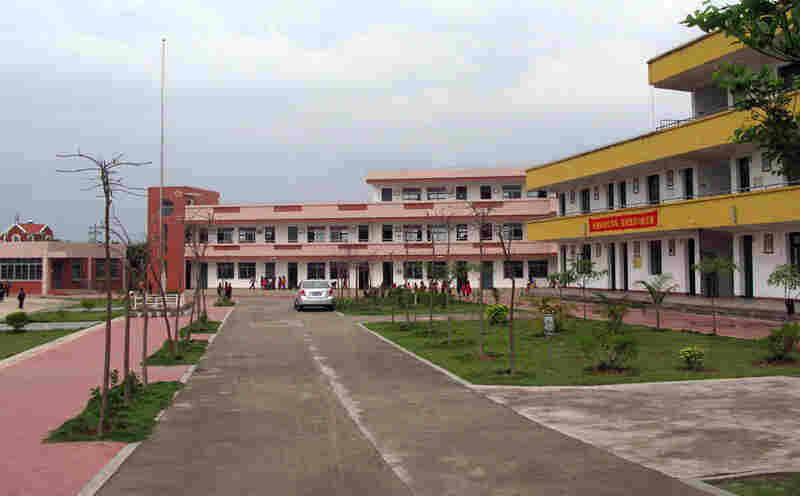 The Nanputuo foundation also has donated $20,000 to Neicuo primary school in Xiamen to help construct its new buildings. "I think one of the main functions of these foundations is to provide financial aid to schools," says headmaster Song Xubo. Louisa Lim/NPR hide caption

But today religious institutions around China are beginning to play a much larger role in aid work; the massive earthquake in Sichuan in 2008 was the turning point. Then, officials invited religious groups, including Buddhists, Christians and Catholics, to help in the aid effort.

At a local level, it's not uncommon for religious groups to operate medical clinics, build orphanages and donate money to the poor. Some religious charities are even contributing to fund public works projects, such as building roads and bridges.

Andre Laliberte of the University of Ottawa is researching Buddhist philanthropy in China.

"Local governments [that] are cash-strapped are only too happy to have donations from religious organizations [that] want to help them," says Laliberte.

But he says that work is happening in a very low-key way since "the [local governments] don't want to give credit, as that might increase the social capital of those institutions."

"It also looks bad for the state," he adds. "If it can't provide social services, then it becomes an issue of government legitimacy."

One beneficiary of Nanputuo Temple foundation's largesse is a small, austere hospital for leprosy patients, situated next to a pig farm on the outskirts of Xiamen. It was originally located on this hilltop, away from residential districts, because of public fear of leprosy.

Some of the patients have lived at the facility for decades, abandoned by their families. The fund gives the hospital about $3,000 a year. It's not much, but hospital director Chen Xichen says it makes a huge difference to patients.

"The foundation gave us money, electric fans and cookers, clothes, closets and beds," he says, gesturing at almost every single possession in one patient's room. "Sometimes I ask our patients what else they need, but they can never even think of anything else."

The temple is a cash cow; its vegetarian restaurant caters to tens of thousands, and it has created business for sellers of incense and Buddhist trinkets.

Tourists hand over ticket fees of nearly $900,000 a year. Some of that goes towards the temple's development and upkeep, but part of that revenue also goes to the local government, according to Li Xiangping from East China Normal University's Institute of Religion and Social Development.

The development of the Buddhist economy is often interconnected with that of local government economy, as they're driving each other. The two sides may cooperate over the planning of tourist destinations and tourism revenues. This also helps build Buddhism's image.

"The development of the Buddhist economy is often interconnected with that of the local government economy, as they're driving each other," Li says. "The two sides may cooperate over the planning of tourist destinations and tourism revenues. This also helps build Buddhism's image."

In the past, money matters have caused disputes in the corridors where today Buddhist music is piped. In 1990s, a disagreement over the management of the restaurant at Nanputuo Temple culminated in a stand-off; militant monks held government officials hostage overnight, leading to a raid on the temple by special forces.

But today, the temple's relationship with the local government in economic terms is mutually beneficial.

Academics such as Laliberte believe Beijing is also supporting Buddhism for another reason: to counterbalance the explosion of Christianity in China.

"I have reason to believe the Chinese government might be encouraging Buddhist institutions, simply because they're worried about the rapid spread of Christianity and Protestantism in particular," he says.

"They can try to channel it and Buddhism is a good candidate. The infrastructure is there and Buddhist monks are willing to accept that role."

China's communist leaders are mobilizing all resources -- including Buddhists -- to build a "harmonious society," their latest watchword. As people grow richer, the temples are becoming more like multinational corporations, with their balance-sheets ballooning.

Their contributions to government coffers may not yet be huge, but they will surely increase over time. And China's pragmatic leaders are making sure the government is benefiting from the economic effects of this religious revival.