Accessibility links
Rush Of Gas Caused Mine Blast, Massey Theorizes In twin assaults Thursday, both Massey Energy and CEO Don Blankenship suggested that an "overwhelming" rush of methane gas may have been the cause of a deadly April 5 explosion at Massey's Upper Big Branch mine in West Virginia. Mine safety officials are skeptical. 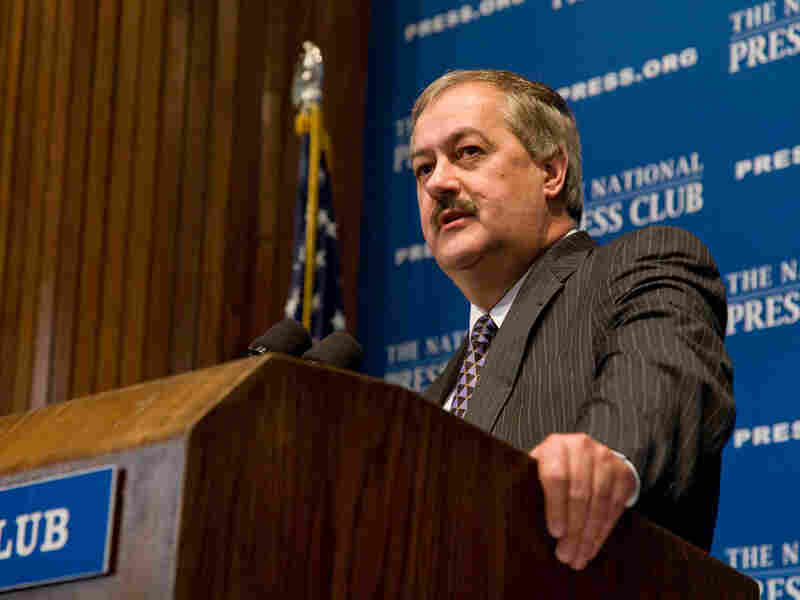 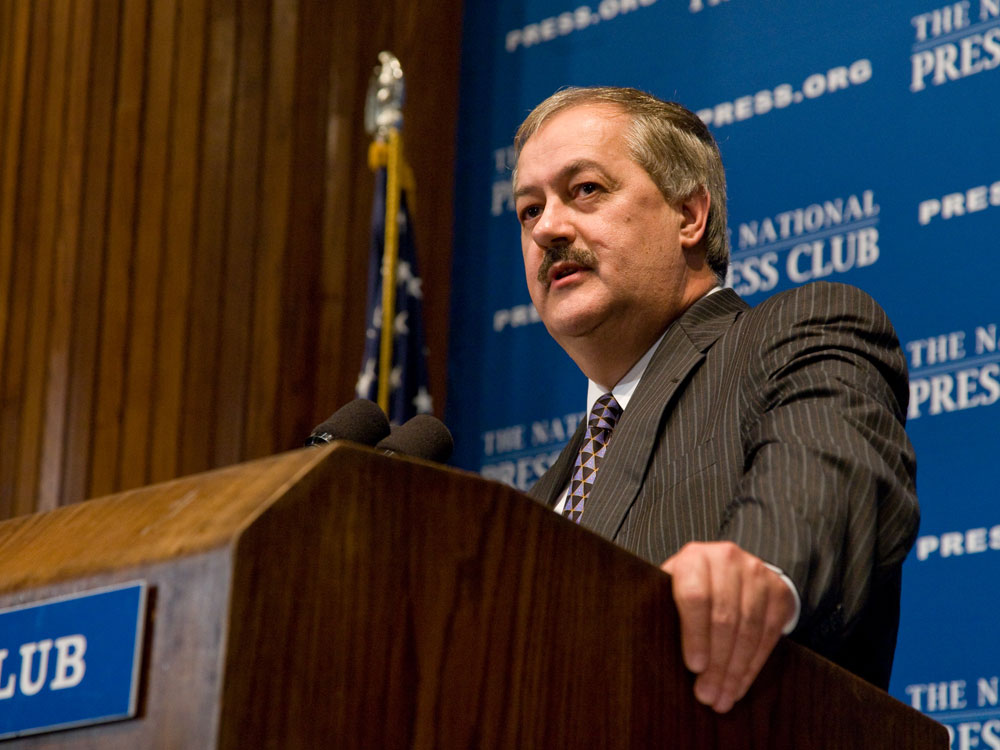 Massey Energy CEO Don Blankenship may be among the most vilified corporate executives of the moment, but neither he nor his company is backing down.

In twin assaults Thursday, both Blankenship and Massey Energy defended the coal mine company's safety practices and continued to deflect blame for the deadly blast April 5 that killed 29 mine workers at Massey's Upper Big Branch mine in West Virginia.

Blankenship was the luncheon speaker at the National Press Club in Washington, D.C., where he delivered a speech about energy, economic and environmental policy, and then took questions from the audience.

Massey Eyes Methane As Cause Of Mine Blast

Massey Eyes Methane As Cause Of Mine Blast

Massey Energy floated a new theory about the cause of the Upper Big Branch explosion that blames a natural event that could not be prevented. Mine safety experts and federal mine safety officials dismiss the theory as self-serving and unlikely.

The theory is based on elevated methane gas readings inside the Upper Big Branch mine more than five hours after the April blast. They were 2.5 times above normal, according to Christopher Schemel, a mining engineer hired by Massey to assist in its own investigation of the accident.

"The methane gas data is a very important piece of evidence," Schemel says. He believes that data indicate a sudden and "unexpected release" of methane gas so "intense and overwhelming" it overpowered normal safety systems.

"To put it in perspective, a methane release of this size would completely fill ... the volume of a typical mine entry to explosive levels in under 25 seconds," Schemel says.

Methane at that concentration is easily ignited by sparks from the rotating cutting "shears" on a mining machine.

Blankenship referred to the theory during his National Press Club appearance.

"We didn't expect a large inundation of gas that it appears that we had," the Massey CEO said, before suggesting that no amount of preparation or federal regulation could have prevented a resulting explosion. "The main thing is that the laws of physics pay no attention to the laws of politicians."

Schemel says the rush of methane could have come from large cracks in the mine. Methane is a naturally occurring substance in coal mines, and coal seams in central Appalachia tend to have lots of gas.

The Mine Safety and Health Administration immediately sought to cast doubt on the theory by noting that the high methane readings were measured several hours after the explosion.

"Elevated methane levels after an explosion in a mine would be expected if the explosion damaged ventilation controls and if mine gases from sealed areas or from [previously mined areas] were pulled into the [mine's air flow]," the agency said in a statement. "This would cause a rise in methane after the explosion and could account for elevated methane in the samples." 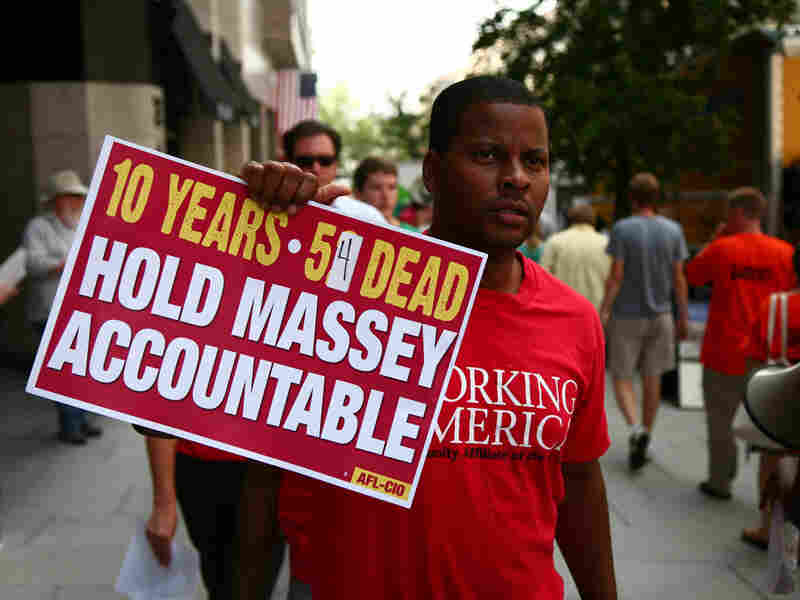 An AFL-CIO member protests outside the National Press Club on Thursday. The union wants Massey Energy CEO Don Blankenship to be held accountable in the deaths of 54 miners killed on the job in the last 10 years. Wayne Huang/NPR hide caption 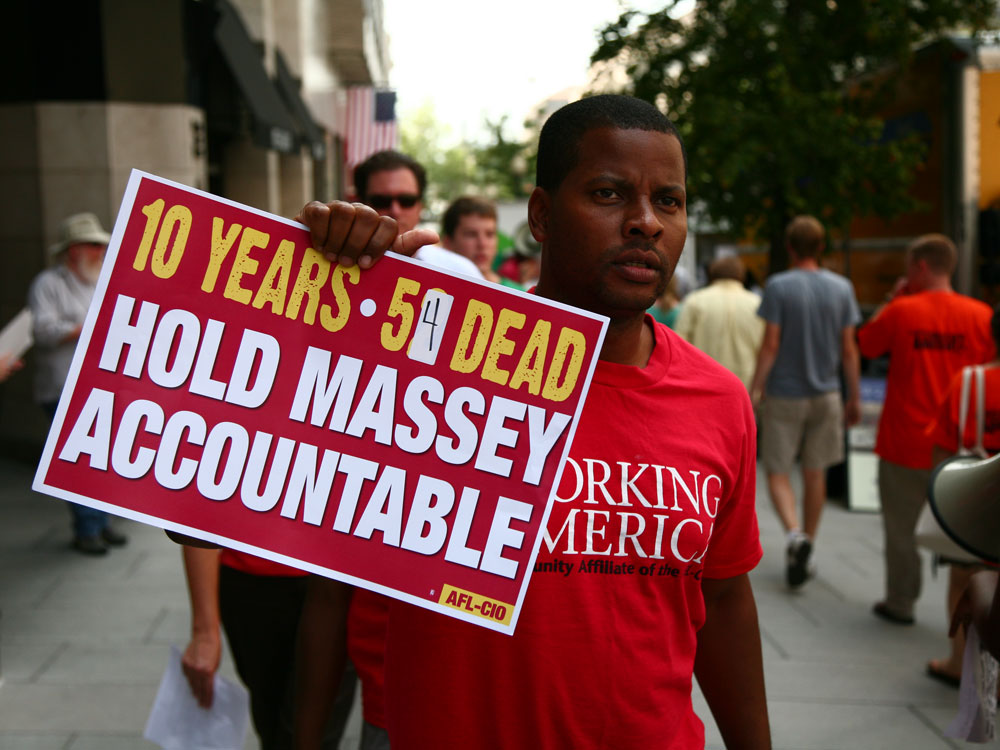 An AFL-CIO member protests outside the National Press Club on Thursday. The union wants Massey Energy CEO Don Blankenship to be held accountable in the deaths of 54 miners killed on the job in the last 10 years.

MSHA also noted multiple violations of safety standards at the mine in advance of the explosion, and said investigators are looking closely for "any evidence indicating methane detectors were tampered with."

That's a reference to allegations that Upper Big Branch mine managers ordered company electricians to deliberately disable methane monitors. NPR described such an incident in a story last week, and several miners say disabling monitors was a common practice in the mine.

Methane monitors automatically shut off mining machines if they malfunction or if they detect concentrations of gas approaching explosive levels. Continuing to operate a mining machine without a functioning methane monitor is considered dangerous and illegal.

"We don't believe in bridging monitors," Blankenship said, but added that with "7,000 people working hundreds of days a year, you can have almost anything happen."

In response to a question about NPR's methane monitor reports, Blankenship said that one of two monitors on the longwall mining machine hit by the explosion has been inspected and was not disabled.

When asked about the methane monitor Blankenship referred to, MSHA spokeswoman Amy Louviere said, "This is something that will be addressed during the course of the investigation."

Mine safety consultant Bruce Dial, a former federal mine inspector and trainer, is skeptical about the new Massey theory.

"It's convenient, let's put it that way," Dial says. "If they had a rush of methane and they're saying, well, they can't control that, well it would be awful convenient for them."

Massey Energy has been aggressive about asserting possible causes of the blast that are not associated with its own safety record or practices. The company has blamed changes in federal regulation and MSHA changes in mine management plans.

MSHA has disclosed very little about the investigation of the blast, so Massey's statements fill an information void.

Blankenship told the crowd of reporters and mining industry officials at the National Press Club that he's offended by how he and his company are characterized.

"The thing that is most disturbing in the press is the idea that we as Appalachianers or as coal miners or as company executives don't really value life," Blankenship said. "We certainly would never put profits over safety, and no one would want the experience of informing 29 families that they'd lost their loved ones."