Accessibility links
Gut Check: How Do Caterpillars Walk? Caterpillars don't have a bone in their body. They move by squeezing muscles in sequence in an undulating wave motion, but what exactly happens on the inside? Scientists wanted to find out, so they got a tiny, custom-built caterpillar treadmill. 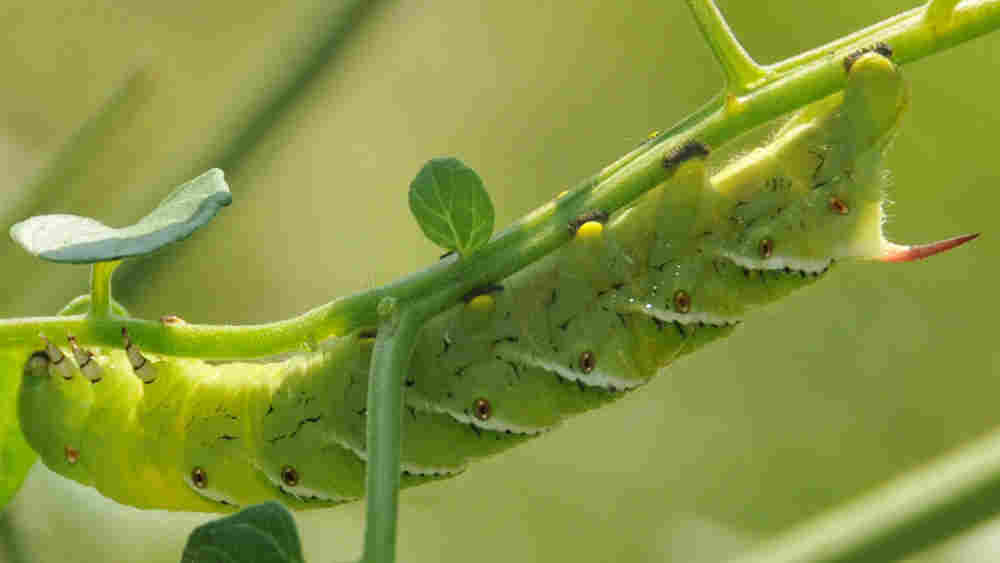 Scientists studied the Manduca sexta caterpillar under X-ray and found that when caterpillars walk, their guts move forward first, followed by the rest of their bodies in a rippling movement. Ted Kropiewnicki/Tree of Life Web Project hide caption 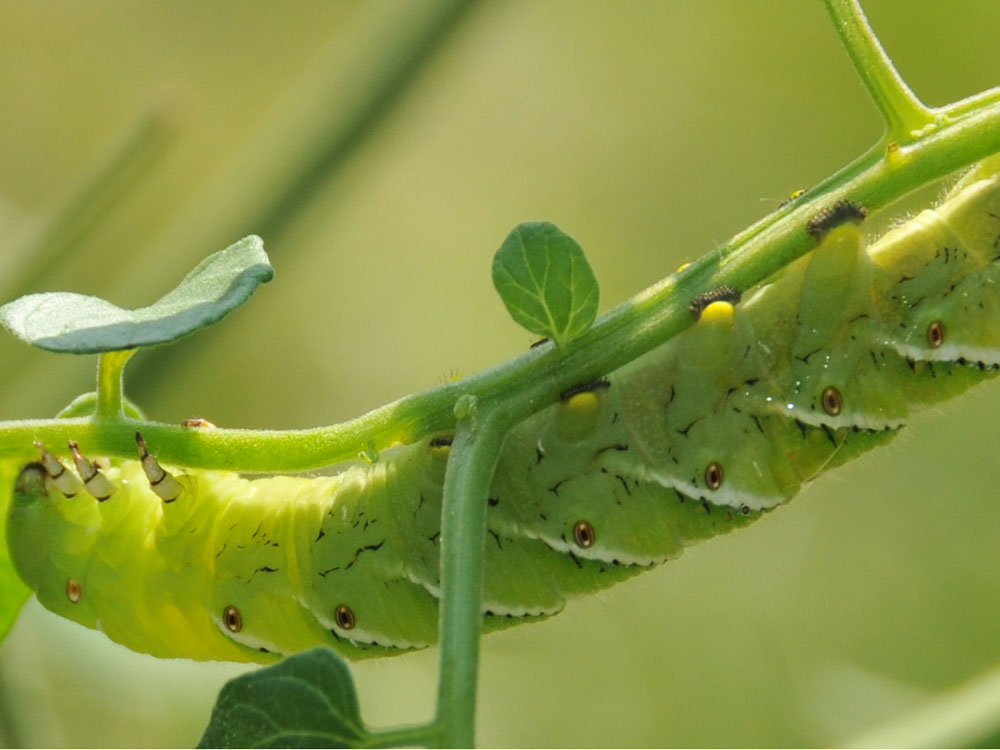 Scientists studied the Manduca sexta caterpillar under X-ray and found that when caterpillars walk, their guts move forward first, followed by the rest of their bodies in a rippling movement.

The question isn't why did the caterpillar cross the road but how? Researchers have discovered that at least one species of caterpillar precedes each step with a thrust of its gut. The finding points to an entirely new mode of animal locomotion and could lead researchers to develop new robotic tools for exploration and medicine.

Caterpillars don't have a bone in their body. They move by squeezing muscles in sequence in an undulating wave motion. It is easy enough to observe from the outside, but Michael Simon, then a graduate student at Tufts University wanted to know what was happening on the inside. Simon decided he needed to X-ray a caterpillar as it crawled.

That isn't as easy as it sounds. Because caterpillars don't have bones, they can't be X-rayed by conventional machines. So Simon and his group took the caterpillars to a special, X-ray-producing particle accelerator at Argonne National Laboratory in Illinois. They also brought a tiny, custom-built caterpillar treadmill.

"We put our caterpillar on top that treadmill in this big, shiny star trek room," Simon says. Then came the really tricky part. "You'd be very surprised how difficult it is to make a caterpillar crawl when it doesn't want to."

When the caterpillar finally did get moving, Simon and his advisor Barry Trimmer saw something really unusual. Just at the start of the caterpillar's step, something on its inside swayed forward. "Eventually we were able to establish that we were watching the gut moving back and forth," Simon says.

The team believes that this is an entirely new form of animal movement. They say they are unaware of any other animal where the insides move before the outsides do. Their results appear in the August issue of the journal Current Biology.

"It's a whole different solution to the problem of locomotion," says Michael LaBarbera, who studies invertebrate movement at the University of Chicago and was not involved in the study. "For geeks like me and, you know, 100 of my closest friends, this is really, deeply interesting."

LaBarbera says he's not entirely clear what the caterpillar is doing. It could be that it's shifting its center of mass before each step. Or perhaps the thrust is aiding its primitive circulatory system. Nor is it clear whether the movement is unique to this species of caterpillar Manduca sexta, or common across the entire caterpillar world. "Like any really interesting paper, it opens up more questions than it answers," LaBarbera says.

Some scientists believe the gut thrust may not have anything to do with movement, at least not directly. "I don't entirely buy the message," says John Brackenbury, a professor at the University of Cambridge in the U.K. Brackenbury says that the move may be designed to protect the gut while the caterpillar is walking.

Simon agrees that protecting the gut is a distinct possibility. "The whole point of the caterpillar is it's an eating machine," he says. "Anything that interferes with either of those functions is a disadvantage."

It's not just an academic debate. The Trimmer Lab where Simon works would like to eventually develop robots from the caterpillar model. They could work as new super-soft endoscopes for probing the inside of the human body, or as search and rescue machines.

For his part, Simon says that the caterpillar has taught him that new findings can come from almost anywhere. "There are still opportunities for discovery even in the most humble of places," he says.