Accessibility links
Tweeting With The Birds: Pitch Tent, Switch To Wi-Fi Today, going camping does not mean living incommunicado. Campsites around the country are spending the extra cash to have wi-fi signals in the wilderness, and many campers have come to expect the amenity. 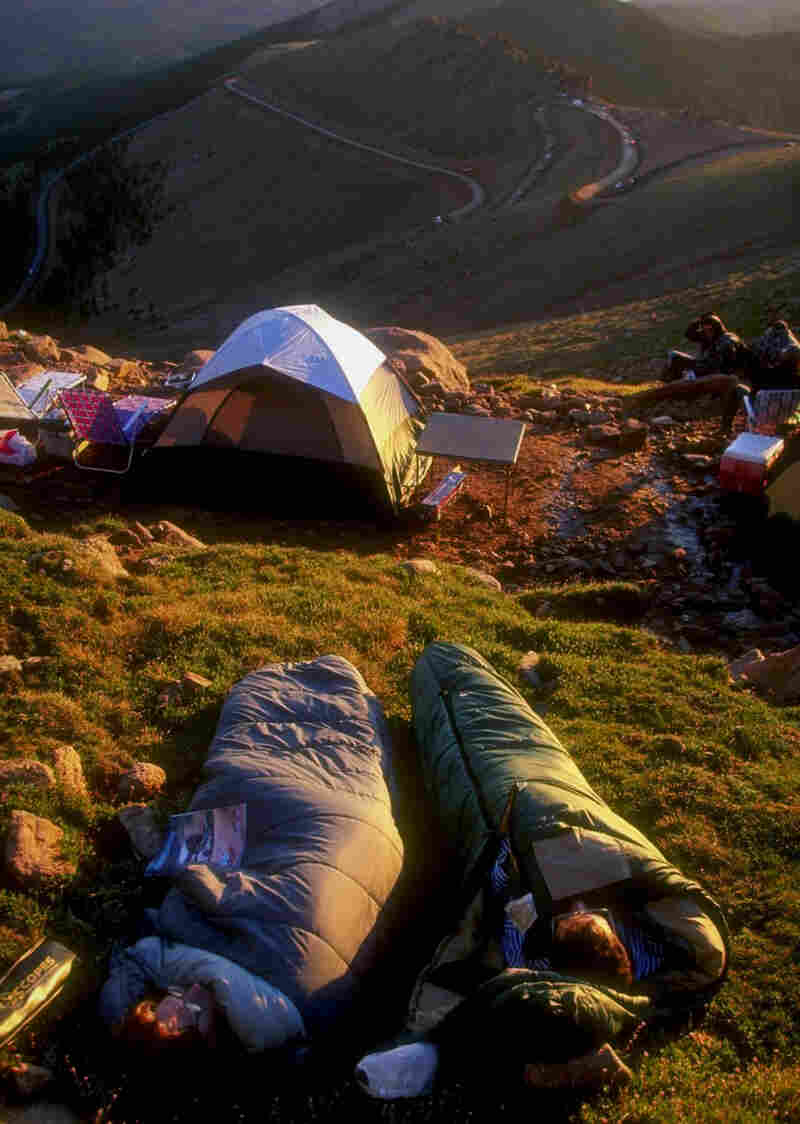 Campers sleep at Pikes Peak Highway in Colorado Springs in 1998. Recently, the serenity of disconnected camping has given way to a wilderness wired for constant Internet access. Brian Bahr/Allsport/Getty Images hide caption

More and more Americans are taking their work and electronic play with them on vacation this summer. And now it's getting even easier to stay connected in some of the most far-flung areas, like the woods. The popularity of wi-fi access in campgrounds is exploding.

Kathy Palmeri, who owns Jellystone Campground near Estes Park, Colo., says getting reliable wi-fi to the area posed some logistical challenges. The campground is perched on a rocky mountainside covered in trees. But she says the investment is worth it. Why? Because her customers expect it.

"Now it's just like having a water line or a telephone or any other basic amenity. You basically need it to do business," Palmeri says.

What The People Want

It was once thought people went camping to go, you know, camping. Get away from it all.

Evidently this demographic is dwindling. Even Linda Profaizer, the president of the National Association of RV Parks and Campgrounds, confesses to being a wi-fi using, e-mailing camper.

"The reason is that people want to be connected. As you are very aware, you can't go anywhere anymore without someone having their cell phone in front of them, communicating with somebody," Profaizer says. "Just because you have wi-fi doesn't mean that you're getting away from the camping experience at all. I mean you don't see it, it's only there if you want to use it."

It's clear people use the Internet for everything these days. Take Jellystone: You can't really get a signal on your cell phone, but you can now use Skype.

Tony Ponce, his wife Michelle and son Austin were vacationing there recently from Kansas. They like having all these amenities at their fingertips.

"I mean, we came here to camp, you know, get away from that kind of stuff. But it's nice to have. 'Cause there are times when you're sitting out here and you're bored," Ponce says.

And the other night, when the Ponces got bored?

"We actually watched Big Brother from the computer last night," Ponce said. To which his son added, "We can't miss Big Brother."

Fortunately for Big Brother's ratings, it's getting easier and easier to watch shows online from campgrounds across the country. Since 2002, more than 6,000 of the 8,000 private campgrounds in the country have added wi-fi, the bulk of which happened in the last couple years. 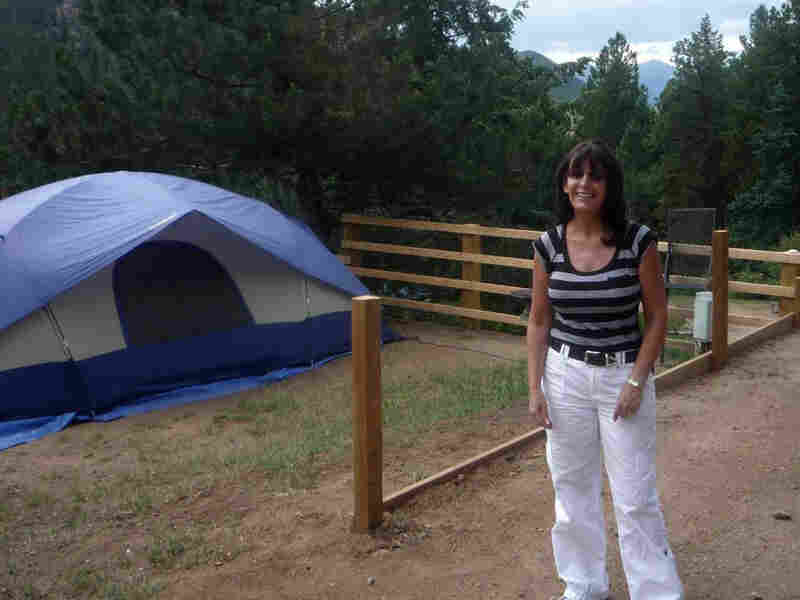 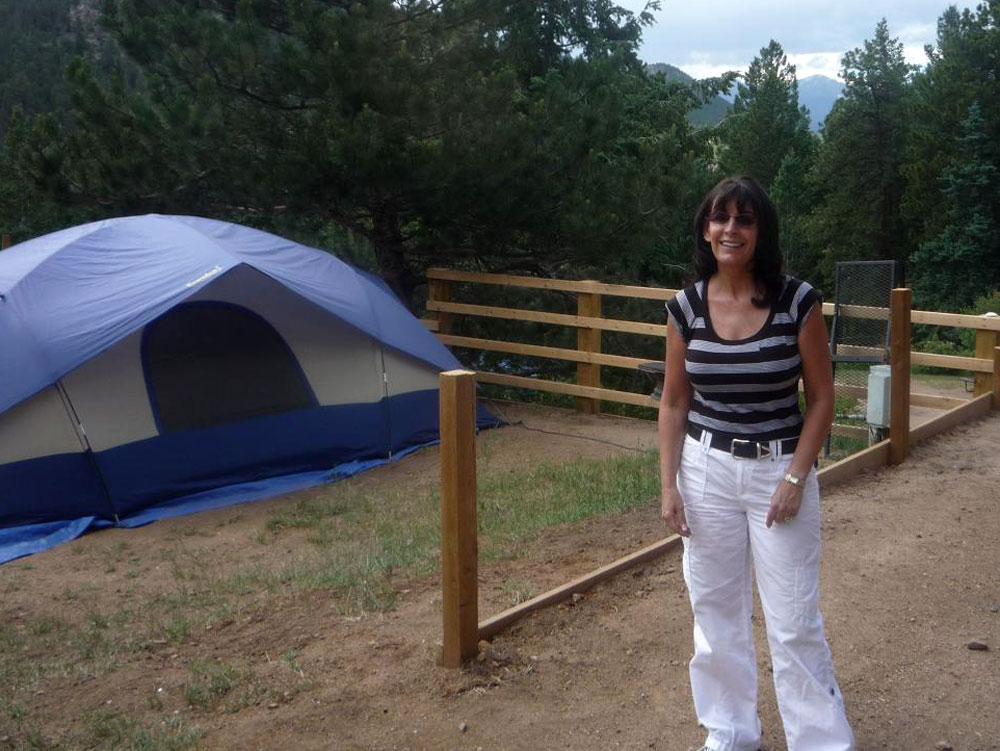 Kathy Palermi is the owner of the Jellystone Campground near Estes Park, Colorado. Palmeri says campgrounds adding wi-fi are responding to customer demand.

But don't worry, there are still a few purists out here.

Over in Rocky Mountain National Park, Kottner and a couple of his buddies from Kentucky are getting ready to hike into the wilderness to camp for the night.

"I'm super excited to be away from that computer and have its lid closed, tightly," Kottner says.

Which is good because the park just added wi-fi at two visitor centers, but not at any of its campgrounds. The park service says this is the case for the rest of its some 3,000 campgrounds across the country, and there are no plans to change that.

Still, Rocky Mountain National Park spokeswoman Kyle Patterson says there may be an upside to all this connectivity.

"For some people, they are now showing on their Facebook pages, or tweeting, 'Look at where I just was in Rocky Mountain National Park, look at the hike I just took, look at this picture of a mule deer I just took,'" Patterson says.

And she says that's a good thing. There's now this expectation that we update our friends and family in real time as we travel. And by adding wi-fi, campgrounds are responding to this, says Eric Stumberg. He's built his Austin, Texas-based company Tengo Internet around installing wi-fi in remote places. Stumberg says it's a new marketing tool.

"Like, I have this great campground, and I want put a camera of my view, so that when I'm marketing my property, people can actually have the same view I have, and like, ‘Wow that looks beautiful.' You can see a mountain if you're in Texas or maybe you can see cooler weather if you're in some place hot," Stumberg says.

As for Jellystone in Colorado, they don't have a webcam -- yet. But they are planning to hold video game tournaments this summer between campers and people who can't make it to Colorado but want to have the virtual camping experience. Because nothing says camping like Guitar Hero.