Accessibility links
China Complicates North-South Korea Tensions On Sunday, the U.S. and South Korea will launch large-scale military exercises designed to send a signal to North Korea in response to its attack on a South Korean naval vessel in March. The two countries have been slow to respond -- in part because of pressure from China. 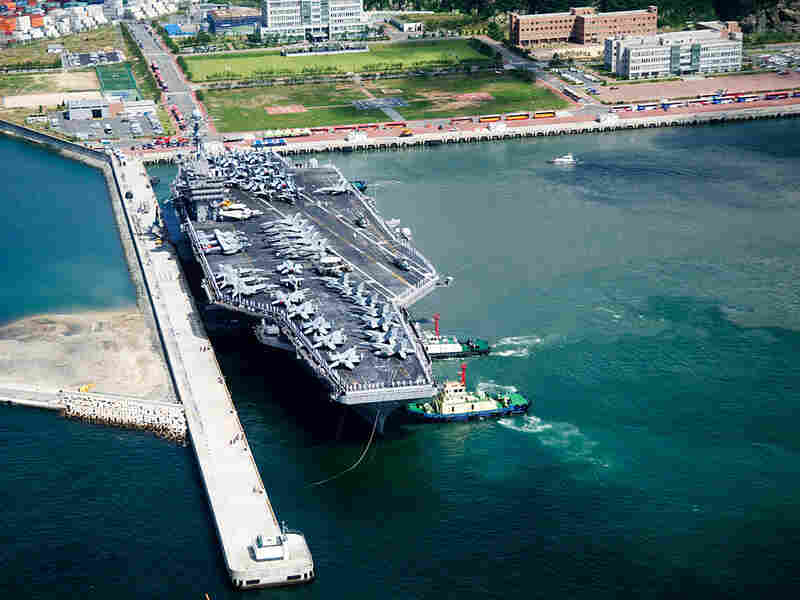 The aircraft carrier USS George Washington docks in Busan, South Korea, July 21, 2010. The vessel will participate in the first of a series of upcoming joint military exercises between the U.S. and South Korea. China has expressed serious displeasure over the maneuvers. Charles Oki/U.S. Navy via Getty Images hide caption 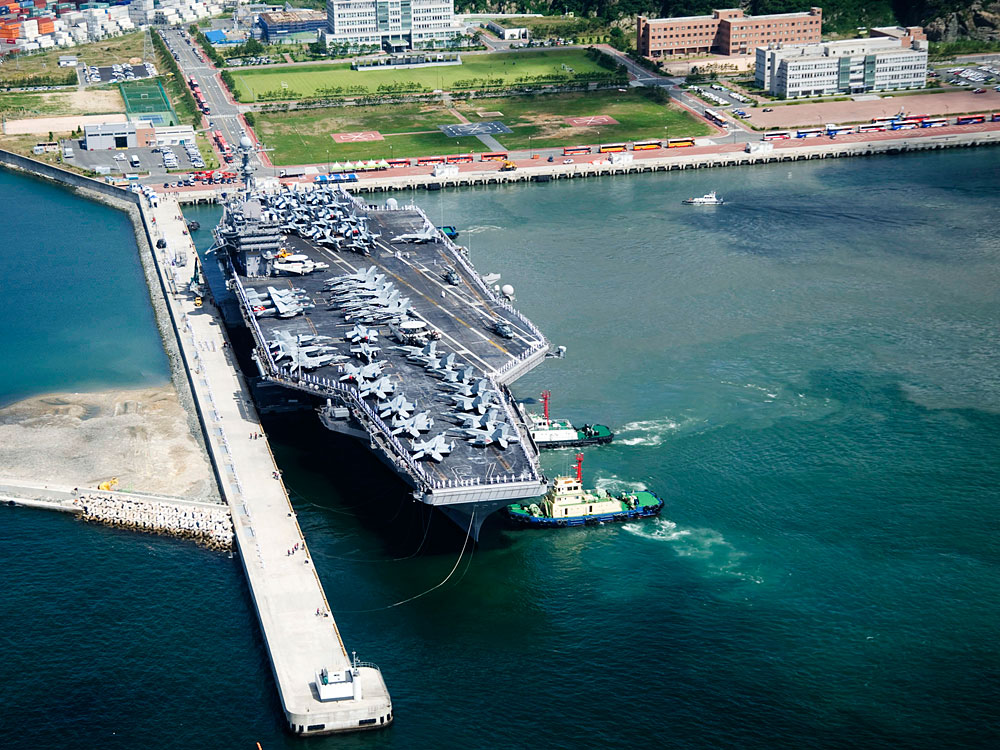 The aircraft carrier USS George Washington docks in Busan, South Korea, July 21, 2010. The vessel will participate in the first of a series of upcoming joint military exercises between the U.S. and South Korea. China has expressed serious displeasure over the maneuvers.

On Sunday, the U.S. and South Korea will launch a large-scale set of naval and air maneuvers designed to send a strong signal to North Korea.

The exercise is in response to North Korea's torpedo attack on a South Korean naval vessel in March that sank the ship and killed 46 sailors.

Both the U.S. and South Korea have been slow to decide how to respond to the North Korean attack -- in part out of fear of provoking more conflict and in part because of pressure from China.

So it has taken nearly four months for the U.S. and South Korea to figure out how to respond to the North Korean attack on the Cheonan. They waited for a South Korean-led investigation as well as action in the U.N. Security Council.

The wait was frustrating, and both the U.S. and South Korea initially intended to hold naval exercises in mid-June.

But when word leaked out that the U.S. was prepared to send the aircraft carrier USS George Washington into the Yellow Sea west of the Korean peninsula -- and not too far from China -- the issue grew more complicated, says Dan Sneider, a Korea specialist at the Asia-Pacific Research Center at Stanford University.

"It was almost a propaganda campaign in China. There were multiple articles in the Chinese media. They made it quite public and they laid it out in some detail what their objections were. It was a little bit unusual the way the Chinese intervened on this," Sneider says.

In fact, the U.S. has held large-scale naval operations in the Yellow Sea before, complete with aircraft carrier battle groups.

But since the Cheonan was sunk, China seems to have done everything it could to protect North Korea from any real repercussions.

It might have better for the U.S. to have acted quickly rather than taken so much time, says Evans Revere, an expert on Korea formerly with the State Department and now with the Albright Stonebridge Group, a consulting firm in Washington, D.C.

"It's become so politically charged an issue when it comes to the Chinese. I don't know that it would have been as charged an issue if the exercise had taken place back in April and May," Revere says.

Now, the exercises will take place in the Sea of Japan, to the east of Korea. They will involve the USS George Washington, another 20 ships and submarines, plus up to 100 aircraft and some 8,000 military personnel from the U.S. and South Korea.

Experts on Korea naval conditions say if the U.S. wants to bolster South Korea's anti-submarine warfare capabilities, the maneuvers should take place in the Yellow Sea, not what the Koreans call the East Sea.

Maj. Gen. John Macdonald, the Pentagon's assistant chief of staff for operations, says there are benefits for conducting the maneuvers east of Korea.

"By doing it where we're doing it, we are getting the most training value out of the East Sea. It has strike training that we need to have on some of the ranges that are on the east coast. It has a capability that we are going to exercise very thoroughly on that side," Macdonald says.

And according to the Pentagon, there will be maneuvers later, possibly in September, in the Yellow Sea, as well.

North Korea Silent As China Speaks For It

In the effort to block the maneuvers nearer the Chinese coast, one military leader in Beijing was quoted as warning that the Yellow Sea has been a preferred path -- a gateway -- for invaders of China in past centuries.

It's a statement that puzzled Revere, the Korea analyst.

"I think it was very unfortunate for statements like that to be made. But the fact is and the fact remains that the exercise is clearly directed at North Korea, not [at] China," Revere says.

Meanwhile, North Korea has been uncharacteristically quiet in recent weeks and let China do most of the objecting, points out Stanford's Sneider.

"I think the North Koreans must be ecstatic ... to have the Chinese come essentially to their defense, and to turn what was the issue of North Korean aggressiveness into an issue of the provocative behavior of the United States and its ally South Korea," Sneider says. "That's great for North Korea. That's a propaganda bonus."

Some experts believe China has been so protective of Pyongyang because the North Korea economy is deteriorating rapidly and the issue of who will succeed the leader, Kim Jong Il, is becoming more and more urgent each week.