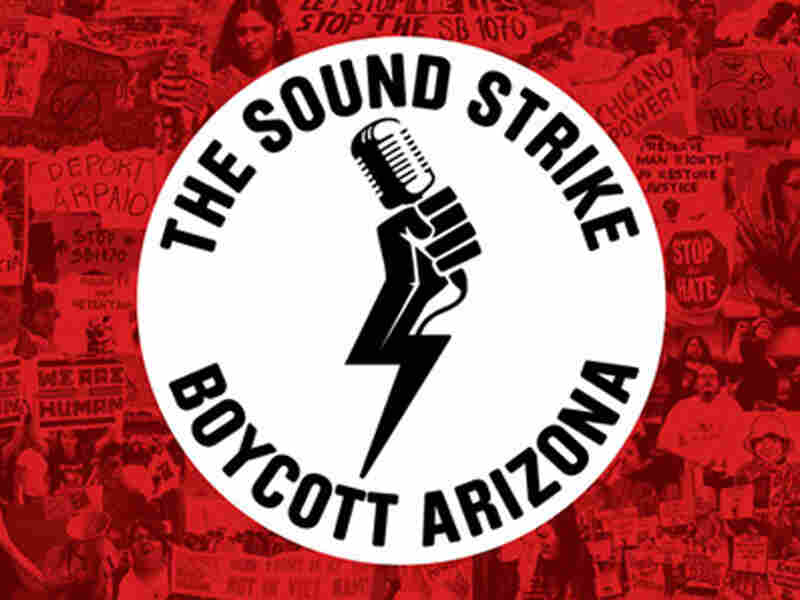 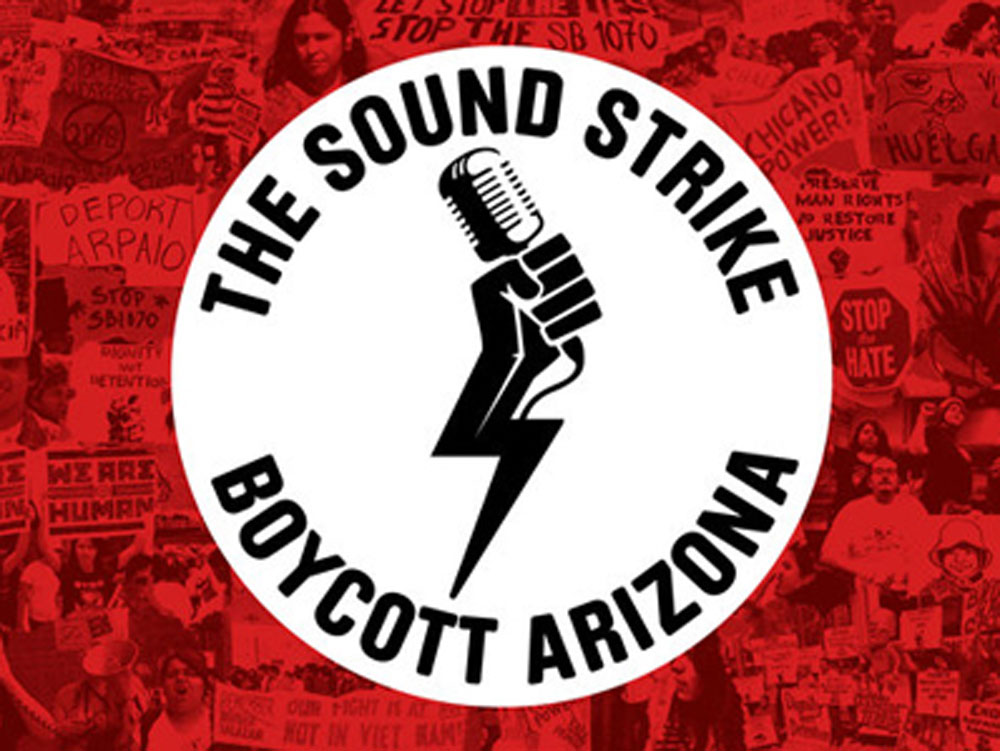 Zack de la Rocha from the band Rage Against the Machine has organized a boycott of Arizona called The Sound Strike.

courtesy of The Sound Strike

The federal government is in court this week, trying to block Arizona's controversial new immigration bill, known as SB1070. Arizona has been hit with several lawsuits and dozens of business boycotts since the law was passed, and musicians have also gotten in on the act: Many are canceling shows in the state, while others are voicing their opposition through music.

Arizona is no stranger to musical protests over its politics. In 1991, Public Enemy's "By the Time I Get to Arizona" lambasted Arizona's decision not to recognize the holiday honoring Martin Luther King Jr. Stevie Wonder, Bill Cosby and others boycotted the state. The NFL yanked the 1993 Super Bowl from Arizona in response to the uproar, and soon after, voters approved the holiday. Fast forward to 2010, when many musicians hope another boycott, this time over the state's immigration law, can have a similar impact.

"We have to intervene in order to do whatever we possibly can to limit that state's ability to function and implement the law," Zack de la Rocha, of the band Rage Against the Machine, says in a Web video he's produced. He's organized a boycott of Arizona called The Sound Strike. So far, he's recruited artists ranging from Kanye West and Nine Inch Nails to Latino bands such as Los Tigres del Norte. Jorge Hernandez says Los Tigres del Norte's decision to join the boycott was personal: If the Los Angeles musicians were to come to Arizona, he says, they worry that police could detain them.

"They can ask questions, or they can stop me because I look brown, or a different color," Hernandez says. "We are very sure that there's going to be problems with our community."

Hernandez says he supports the boycott in solidarity with Arizona's Hispanic community. But not playing Arizona won't really affect his band's bottom line. The boycott is, however, having an impact on some Arizona music promoters and clubs. Alycia Klein is the general manager for the Celebrity Theatre in Phoenix, where the rapper Pitbull canceled his show earlier this month. She says the boycott couldn't have come at a worse time.

"With the economy as it is, this is the last thing that people are thinking about doing with their money, is going to spend it to have fun, if they're just still trying to pay their bills," Klein says. "So when I do have artists that will attract people to come out, and now they're unwilling to come out, it's devastating."

A Hard Sell In Summertime

While hundreds of artists have joined The Sound Strike and say they won't come to Arizona, so far only a handful of acts have canceled scheduled shows, including Hall & Oates and Los Lobos. But Martin Cizmar, music critic for the alternative weekly New Times in Phoenix, says he's more worried about the hundreds of bands who might not join The Sound Strike, but just won't come.

"Arizona is already a hard sell during the summer," Cizmar says, "and we're going to have a long, silent summer with some of this, because people are just going to look at us on the map and think, 'Oh, I don't want to go there.' "

Cizmar says a big, organized boycott caught people off guard. While he says he's opposed to the law, he fears that the boycott could really take hold.

"Because people love to jump on a bandwagon nowadays, it doesn't take too much to get people behind a really big cause," he says. "If this happens to become the cause of the moment, we're screwed."

In response, Cizmar assembled 17 Arizona artists to contribute to a CD called A Line in the Sand. It's a collection of protest songs against SB 1070. All of the acts finished their songs in just two weeks.

Proceeds from the CD will go to organizations fighting the law, which is what Phoenix-based promoter Stephen Chilton says Sound Strike musicians should be doing.

"Any one of these artists, if they really wanted to make a statement, they could come here and play," Chilton says. "Rage Against the Machine could do a benefit here and donate the profits to a number of organizations that would have an impact."

Rage Against the Machine is indeed playing a benefit -- in Los Angeles. But a group of musicians, led by the Tucson band Calexico, is asking groups to come to Arizona, play and speak out against the law. Yolanda Bejarano, of the Phoenix group Snow Songs, is part of the organization, called Artists for Action.

"We need to do something here and mobilize people," she says. "I think it's better to take positive action and try to do it a different way, instead of just not coming here."

In the end, as happened back in 1991, if Arizona relents, it may not be over principle. It may well be over the economic impact the boycott has on the state.