Accessibility links
Eakins' Classic 'Gross Clinic' Gets Another Look Have we been looking at the wrong version of Thomas Eakins' "The Gross Clinic" all along? The Philadelphia Museum of Art is restoring the painting. 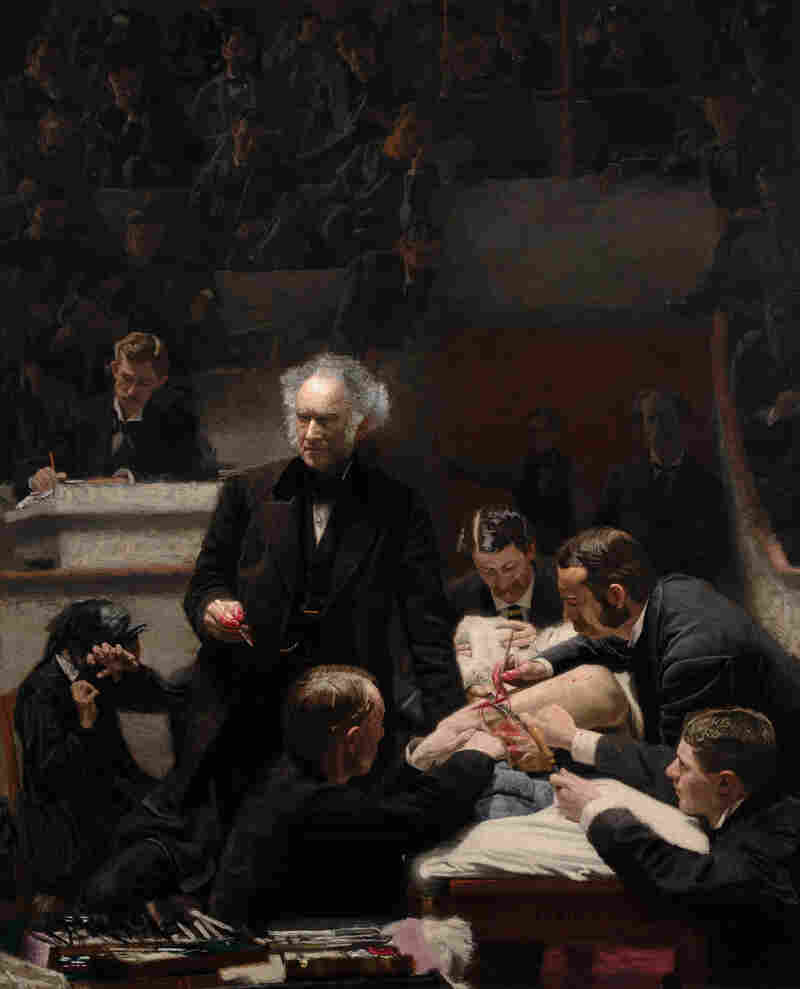 The restored version of "The Gross Clinic," above, is characterized by darker hues that bring the image closer to what Thomas Eakins originally painted in 1875. The Philadelphia Museum of Art hide caption 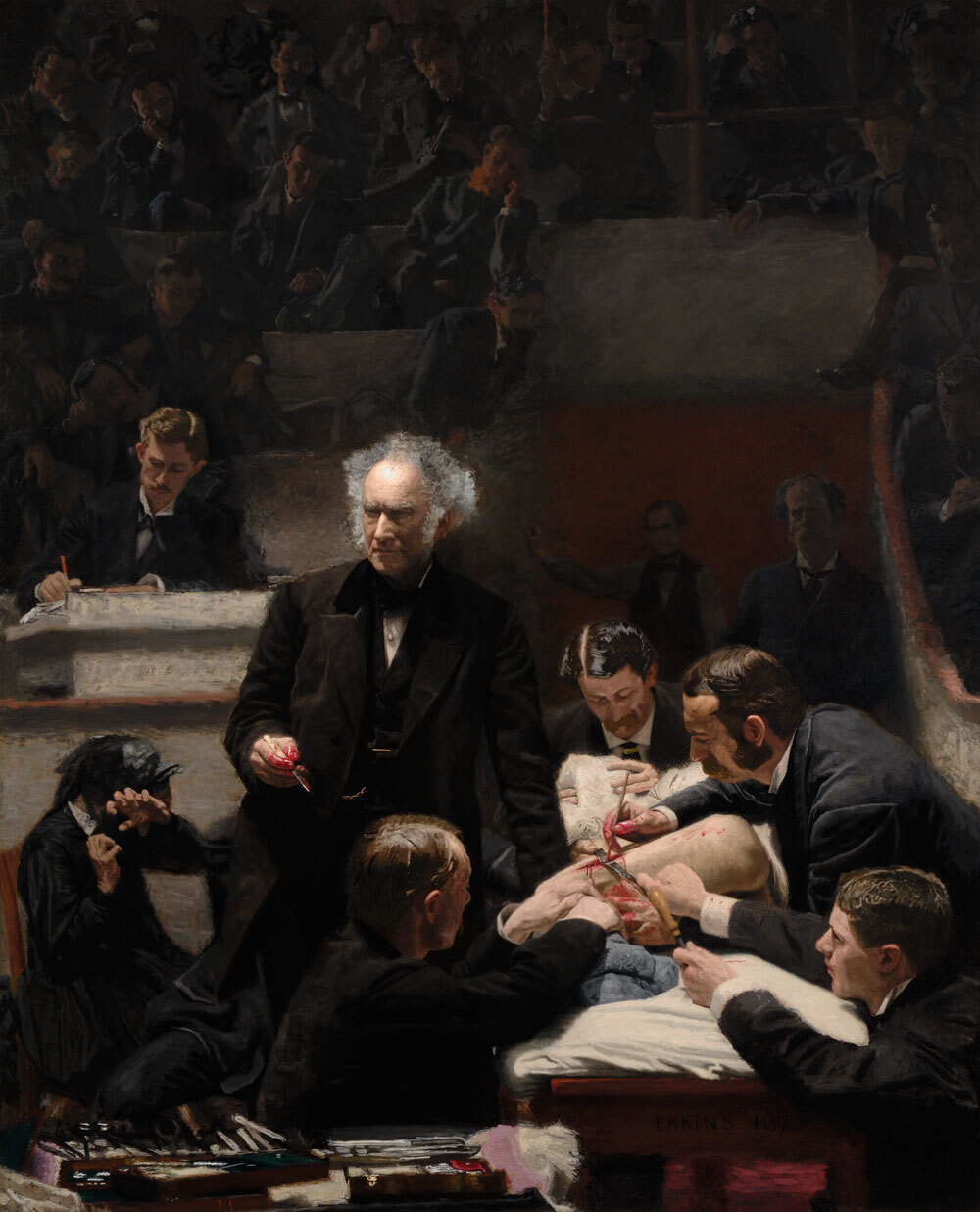 The restored version of "The Gross Clinic," above, is characterized by darker hues that bring the image closer to what Thomas Eakins originally painted in 1875.

The Philadelphia Museum of Art

Thomas Eakins' "The Gross Clinic" has been called the finest American painting of the 19th century. But curators at the Philadelphia Museum of Art say the version in art-history textbooks isn't the one Eakins painted in 1875. So they undertook a meticulous operation of their own to restore it.

The foreground of "The Gross Clinic" features surgeon Samuel Gross with a scalpel in his bloody hand, bathed in light. Behind him in the shadows are dozens of onlookers -- including, at the edge of the frame, the painter himself.

"You can see his cuff, and his hand's holding a pencil," says Kathleen Foster, an Eakins expert and a curator at the Philadelphia Museum of Art. "He's leaning forward and watching the surgery. You can see his shoulder."

The image is dark. Foster says we're not meant to notice Eakins right away.

"He's supposed to be just a quiet witness," she says. "So the figures in the foreground, now they take their proper place."

Foster says time and misguided restoration attempts have long obscured that detail and highlighted others.

"One of the most stunning things for me in this whole project was realizing that the painting we've been looking at for the last 85 years was not really Eakins' painting, that it had really been changed, altered in significant ways," she says.

The most dramatic changes happened around 1925, when the painting's then-owner, Jefferson Medical College in Philadelphia, had it cleaned. In an effort to make the painting brighter, Foster says, someone apparently stripped off some of the layers of dark glaze. 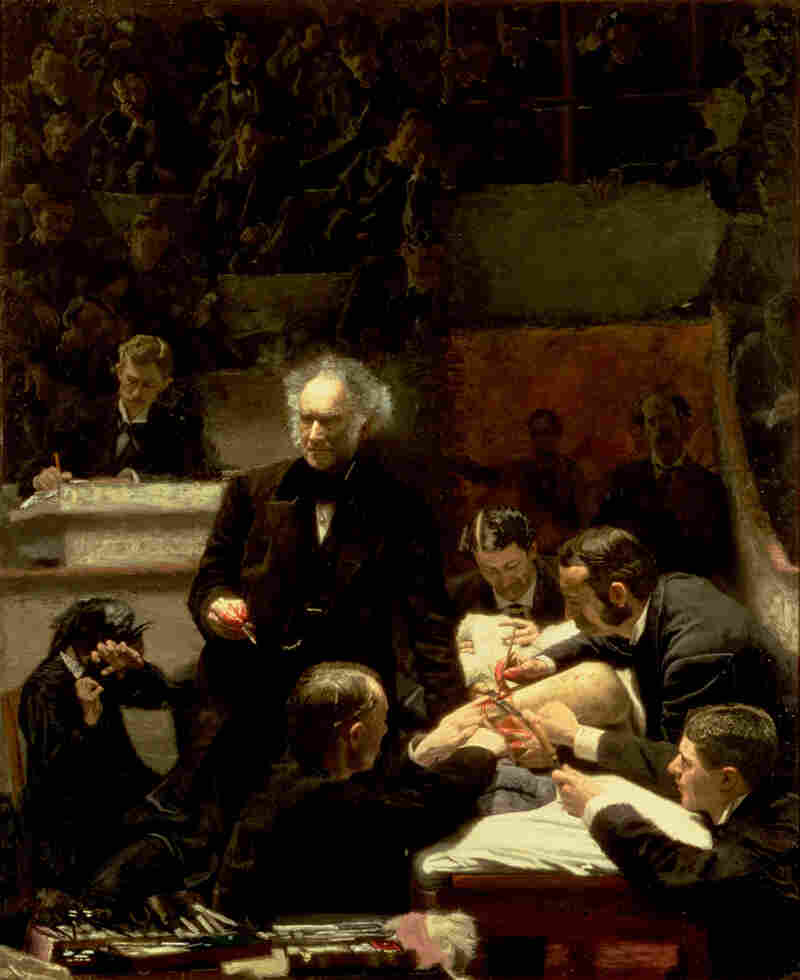 Sometime around 1925, "The Gross Clinic" was stripped of its darker glazes, brightening up the piece significantly. That's not how Eakins intended it to look. The Philadelphia Museum of Art hide caption 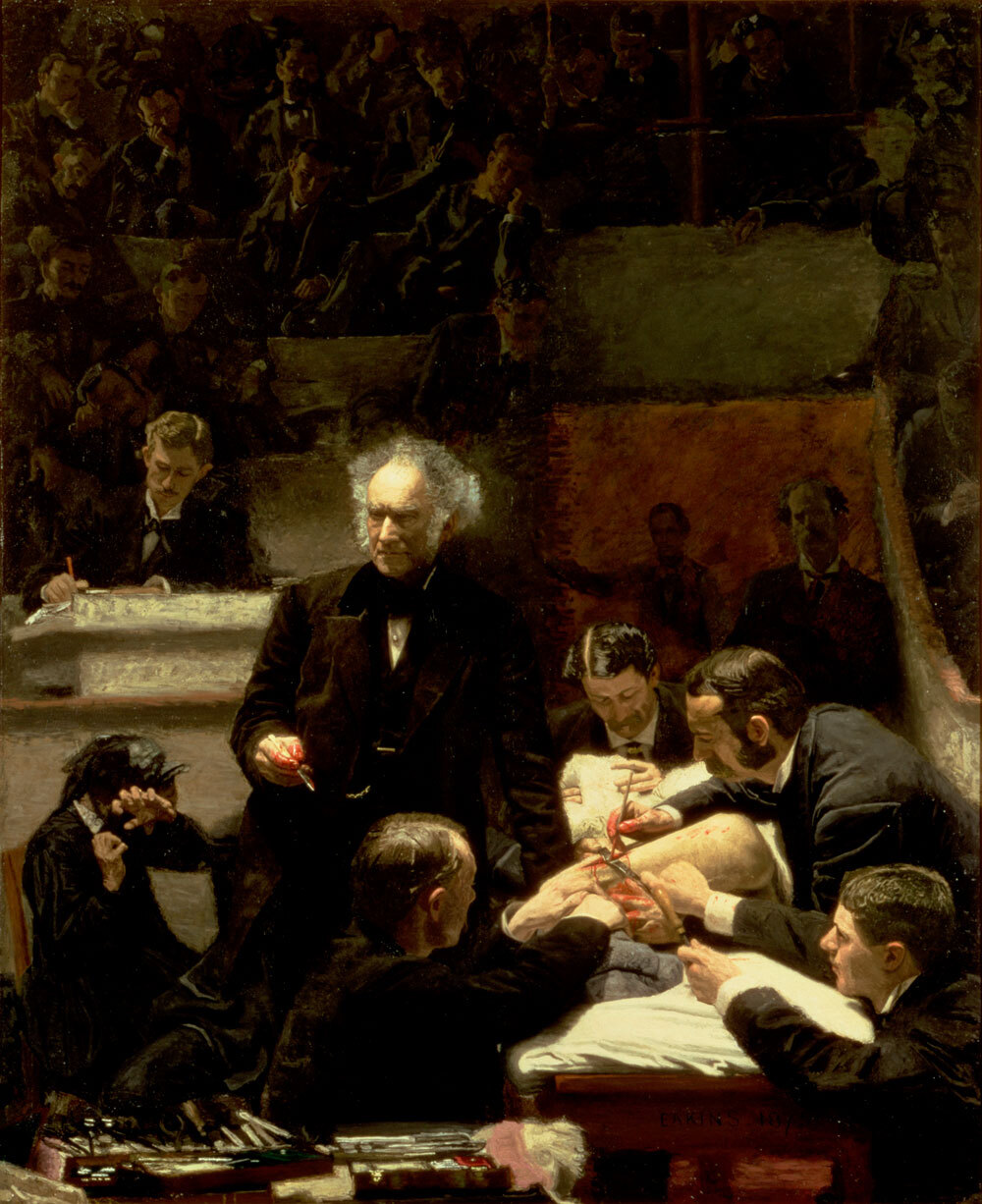 Sometime around 1925, "The Gross Clinic" was stripped of its darker glazes, brightening up the piece significantly. That's not how Eakins intended it to look.

The Philadelphia Museum of Art

That move made some of the painting's darks lighter than they should have been, Foster says -- and that "threw aspects of the image out of balance."

"Things that should have been in the background [got] moved to the foreground," she says, "and changed the focus of the picture."

Fortunately, curators in Philadelphia found a photograph of the painting taken in 1917, before the overzealous cleaning.

"It was absolutely vital. That photograph gave us the information to put things back reliably," says Mark Tucker, vice chair of conservation at the Philadelphia Museum of Art.

Tucker says it's important to see "The Gross Clinic" through the eyes of 19th century audiences, who had a taste for more restrained colors and darker paintings.

"What we're requiring of viewers is that they understand what was misunderstood in the early 20th century," says Tucker. "That it was [Eakins'] wish that the paintings would have areas that are obscure, and that engage the imagination."

It took Tucker and his team of conservationists 10 months to restore "The Gross Clinic." But they almost didn't get the chance.

Four years ago, Thomas Jefferson University nearly shipped the painting off to the Crystal Bridges Museum of American Art -- an unfinished Arkansas project spearheaded by Walmart heiress Alice Walton. But two Philadelphia museums raised $68 million to keep it there.

"There's a great deal of hometown pride," says Rub. "People love Eakins. They understand and fully appreciate the importance of this picture, both in terms of Eakins' career, but ... also in terms of Philadelphia's own history."

Times have changed since a squeamish jury at the 1876 Centennial Exhibition in Philadelphia rejected "The Gross Clinic" for being too gory. But Foster says the painting still has the power to surprise.

"We're in the middle of a culture that's more inured to bloody images. I still think it's a very upsetting picture," she says. "It's a very violent painting. And so in a way, we'd like to recover that shock of seeing the painting for the first time."

"The Gross Clinic" is now on display just nine blocks from where it was painted, in the Philadelphia row house where Thomas Eakins lived most of his life.