Accessibility links
Robert Duvall's Cinematic Take On Faith Robert Duvall has often made faith a character in his films -- whether as the driving force in The Apostle or more subtly in Tender Mercies. His new film, Get Low, is not religious per se, but many see it as highly spiritual. 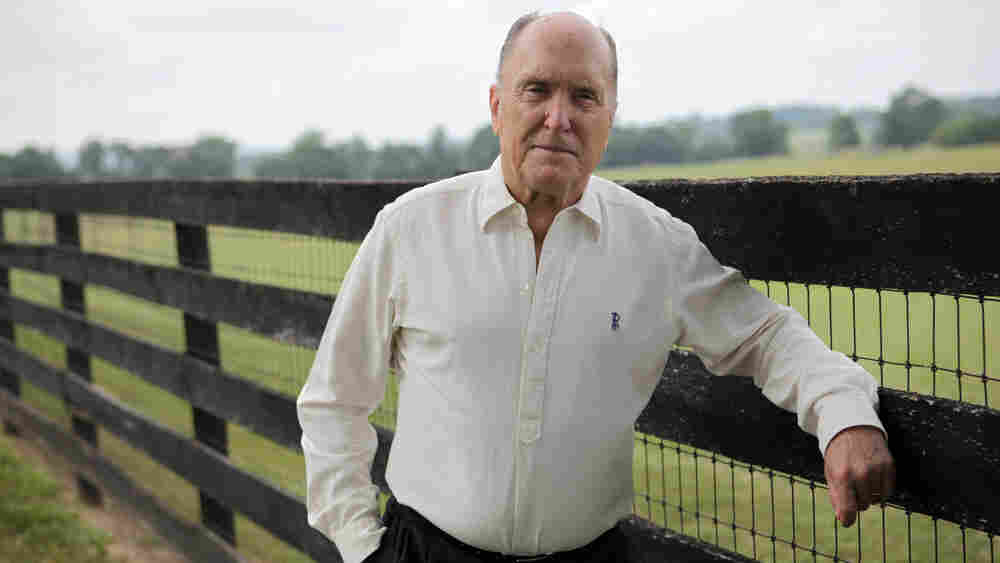 Robert Duvall on his farm in The Plains, Va. The actor is reluctant to talk about his own faith, saying it's a personal thing. Coburn Dukehart/NPR hide caption 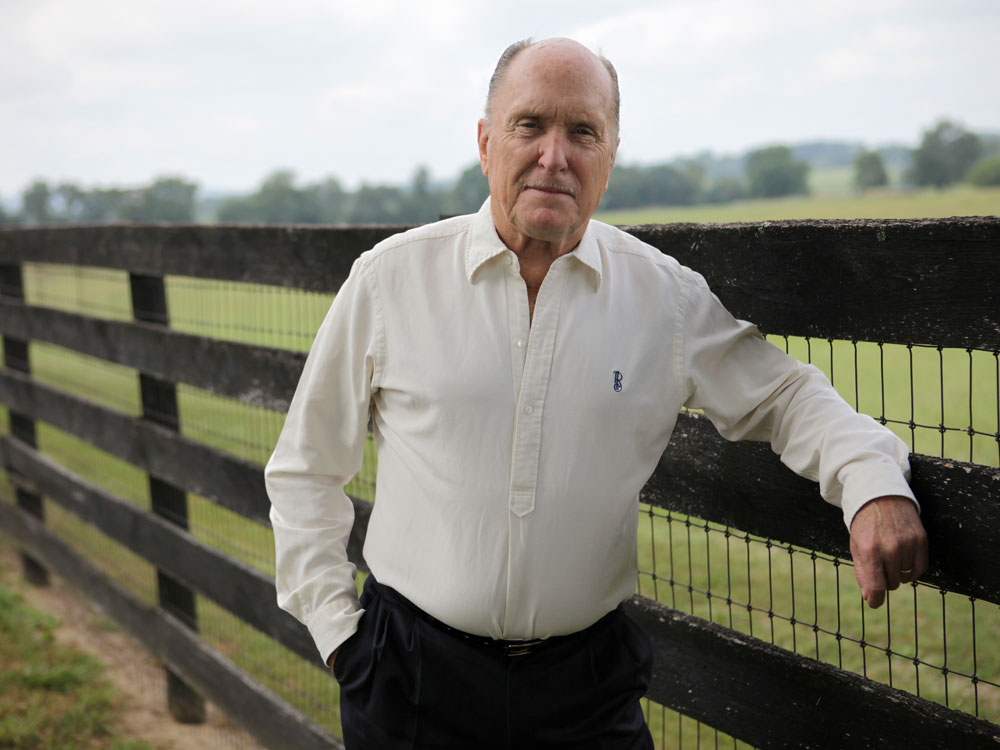 Robert Duvall on his farm in The Plains, Va. The actor is reluctant to talk about his own faith, saying it's a personal thing.

Some call Robert Duvall's upcoming movie a mystery, some a love story. For many, Get Low is about mortality, sin and redemption. The Oscar-winning actor seems drawn to stories about faith -- but not to Hollywood's stereotypes.

Duvall's character in Get Low is hardly a good and Godly hero. Felix Bush looks ancient when he walks into a funeral parlor in a small Tennessee town in the 1930s. He has a long beard, weary face and wary eyes. He's a hermit, but in an early scene, he ventures out to tell the funeral director that he wants a party -- a funeral party.

"You will be, I guarantee it," says the funeral director, played by Bill Murray.

When Felix says he wants to attend his own funeral party, alive and kicking, the director -- eager to make any money in the depressed economy, replies: "It's a detail."

It turns out, Felix Bush has a secret, one that has driven him away from his family, cost him his friendships and sent him into virtual exile for 40 years.

"You know, when I prepared for the part, I tried to find a sense of solitude. Because that's what this character experiences ... a great sense of solitude," Robert Duvall said in an interview at his farm in The Plains, Va. "And within that solitude, I'm sure he thought about the powers that be, beyond us and what's to come and so forth. But you don't like set out to make a movie about that. You just let those things off-handedly lay there within the character."

Duvall's character wants absolution. But when he goes to a minister to ask him to speak at his funeral, the minister asks him if he's "made peace with God." Felix is silent.

"Mr. Bush, you can't buy forgiveness. It's free, but you do have to ask for it," the minister says.

But Felix won't ask. Why should he beg God for mercy when "I never did nothing to Him."

Ultimately, this story is about rejecting cheap, religious grace and seeking the forgiveness of the people you have loved -- and hurt. That defiance matches Duvall's own philosophy.

"Why on this side of the grave does a preacher or a man have that power to send me to heaven or hell?" he asks. "I don't buy that. So, I think if there is a judgment day -- IF -- it will be on the other side of the grave."

Duvall pioneered this more understated approach to faith in his 1983 film Tender Mercies. His performance earned him an Oscar and the enthusiasm of Christian moviegoers. His character, Mac Sledge, is a once-famous country music star who is broken by drink. He does not find redemption in a fiery born-again experience; indeed, after his baptism he confesses he doesn't feel very different -- "not yet" at any rate. His redemption comes gradually, through his love for the Christian woman who befriends him.

Jesus doesn't fix his problems or make for smooth sailing, either, and he has a crisis of faith when his daughter is killed in a car accident.

"I don't trust happiness," the character says. "I never did and I never will."

His faith survives, but the movie never tells us why.

That realistic -- and complex -- approach to faith appears most vividly in a character of Duvall's creation -- a Pentecostal preacher named Sonny Dewey in The Apostle. Duvall wrote the script, directed the film and starred in it. In scene after scene, Duvall captured Sonny's passion and intimacy with God -- not mocking it, but letting it tremble or explode, as when Sonny confronts God after he learns his wife is having an affair.

Duvall tried to sell the script to Hollywood for 13 years, but found no takers. So he put up $5 million of his own money and made the movie he wanted. Duvall says the big studios would have insisted on their stereotype of a Christian white male: a judgmental hypocrite.

"And I felt that if I'd done The Apostle in Hollywood, they would have paid me a healthy salary to do something that would have patronized and not really done it accurately," he says.

Sonny is complicated and flawed. He's prone to adultery and violence. He kills his wife's lover with a baseball bat and flees to rural Louisiana. But Duvall shows Sonny to be likable, passionate about God, authentic.

"I know that he got led astray at times, but always basically I want him to have totally believed in his faith," Duvall says. "Always, even when he went astray. That's what I wanted to show."

In the opening scene, for example, Sonny happens on a car accident. And he does something that evangelical hucksters interested only in money would never do, unless they were being followed by TV cameras: He grabs his Bible, runs to the battered car, and reassures the victims that "there are angels in this automobile at this precise moment." He urges them to accept Jesus, and when the conscious one does, he rushes back to his car and tells his mother, "Mama, we made news in heaven!" The two begin to pray and sing for the couple.

Duvall has an uncanny ear for the Pentecostal preaching cadence -- including the "whoop" -- which is unusual since he was raised a Christian Scientist, where services are about as flamboyant as a toaster oven. (I should know, I was raised a Christian Scientist.) Duvall says he visited black churches all over America, to the puzzlement of his wife.

"She finally said to me one day, 'Bobby do you think we'll ever go to a white church?' because I love the black preachers so much," he says. "They're like the surrogate fathers for their communities."

Race is at the center of one of the most powerful scenes in The Apostle -- a scene that portrays the cost of faith. An angry, racist young man, played by Billy Bob Thornton, arrives at Sonny's church planning to mow it down because it's interracial. Sonny puts a Bible on the ground in front of the bulldozer. When Thornton jumps down to snatch it up, Sonny puts his hand on his shoulder and the young man surrenders.

"I feel embarrassed," the man says and begins to weep, laying prostrate in front of the dark-skinned believers he despised for so long.

The young man's tears, Duvall says, come from humiliation, but also fear: What now of his world view, his tough guy image? The conversion has upended his life, Duvall says. "He was going against everything he ever believed in."

Duvall is reluctant to talk about his own faith. It's a personal thing, he says. But as he nears 80, he seems to be reflecting on death -- and life. He mentions his friend Horton Foote, the writer who gave him his first major role as Boo Radley in To Kill a Mockingbird. He desperately wanted his friend to see Get Low, but Foote was ailing. Then something happened while shooting the pivotal scene in which the old hermit asks the mourners at his funeral party for forgiveness.

"When I'm giving that speech, my wife Luciana is off camera and she gets a phone call, a message saying Horton Foote just passed away -- during that scene," Duvall recalls. "It was like full cycle from To Kill a Mockingbird till that point. He never got to see the film but it was like he was there."

It's an authentic, spiritual moment for him. And maybe it will find its way into a Robert Duvall movie someday.