Accessibility links
'Star Wars In Concert' Puts The Force In The Music The familiar saga is revisited by an 85-member symphony orchestra, a 60-voice choir, a three-story movie screen and a montage of music and scenes from all six movies in the saga. Oh, and C-3PO narrates! 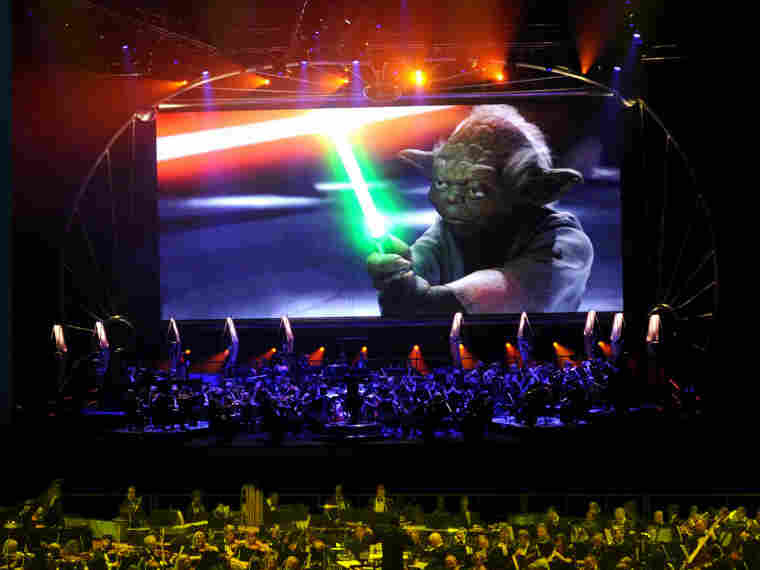 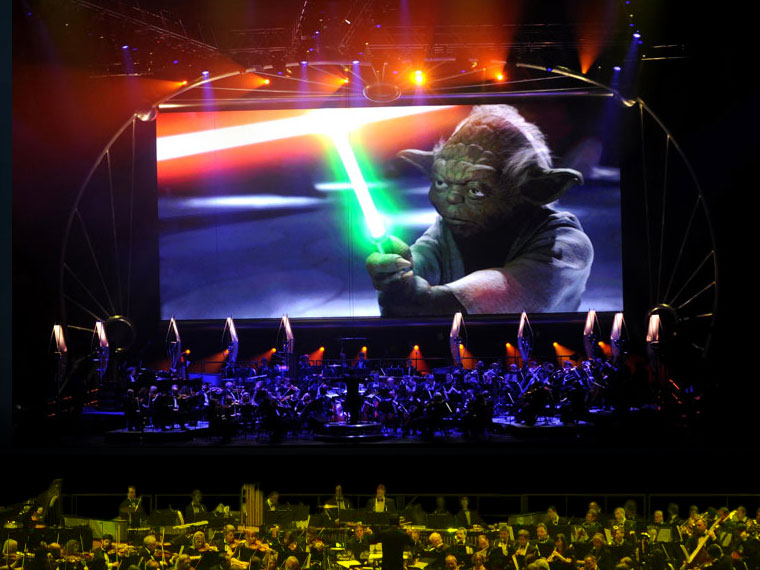 Yoda looks tough over the orchestra.

A long time ago -- just over 33 years to be exact -- the Star Wars saga burst into the nation's theaters.

The so-called space opera opened on just 32 screens. But it has since evolved into a complete universe, with six movies and a current animated series. The franchise has grossed more than $15 billion in worldwide box office and merchandizing.

Now there's a new way to enjoy it: Star Wars in Concert.

It's like the Star Wars movies, but cooler. Because the stars here are the 85-member symphony orchestra and the 60-voice choir that bring this story to life in a uniquely visceral way.

There's a three-story-high movie screen in this touring show, a screen capable of showcasing shots of the orchestra at the same time as a specially edited montage of music and scenes from all six movies.

Star Wars in Concert includes a spectacular light show with flashing green lasers and some familiar voices, including Anthony Daniels, better known to Star Wars fans as the "droid" C-3PO.

Daniels, who also voices C-3PO in the animated series, is the live narrator for Star Wars in Concert.

He thinks there's a reason the Star Wars saga resonates with its multigenerational audience.

"For most people, Star Wars is a timeline of their existence on this planet for the last 35 years," he says. "And the story as I tell it is the destiny of Anakin Skywalker, the destiny of C-3PO ... but it's also the destiny of the audience."

"I'm a '80s child, so Star Wars was the seminal movie for us," says Koye Oyedeji, who brought his 5-year-old son and his father-in-law to see the concert -- along with the exhibit of memorabilia that travels with the show.

"The battle of good versus evil, the idea of the force, these are things that remain with you throughout your entire life," Oyedeji says.

Of course some folk are into it in a more -- shall we say -- flamboyant manner.

"My Jedi name is Avlenkof," says Dave Cofelice, who rode the Metro to the Washington, D.C., show in full Jedi attire. He was 7 when the first movie came out in 1977 and has been hooked ever since. 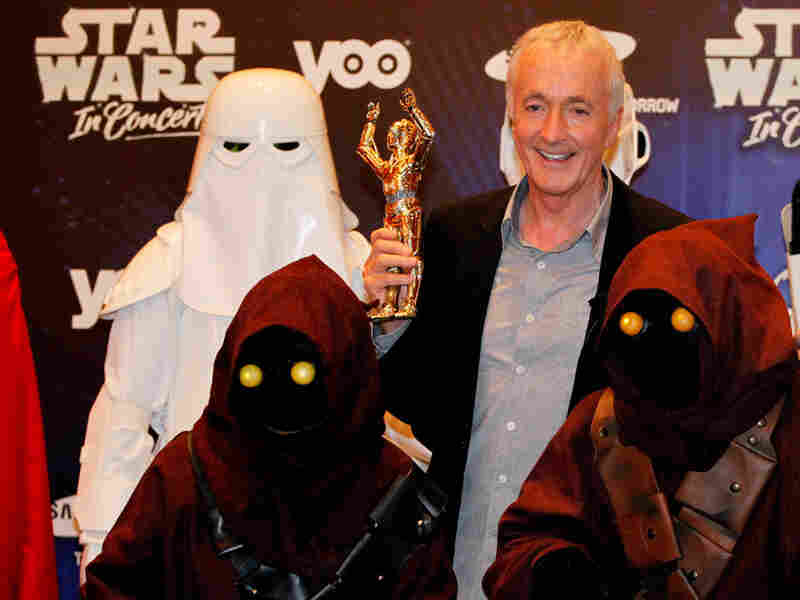 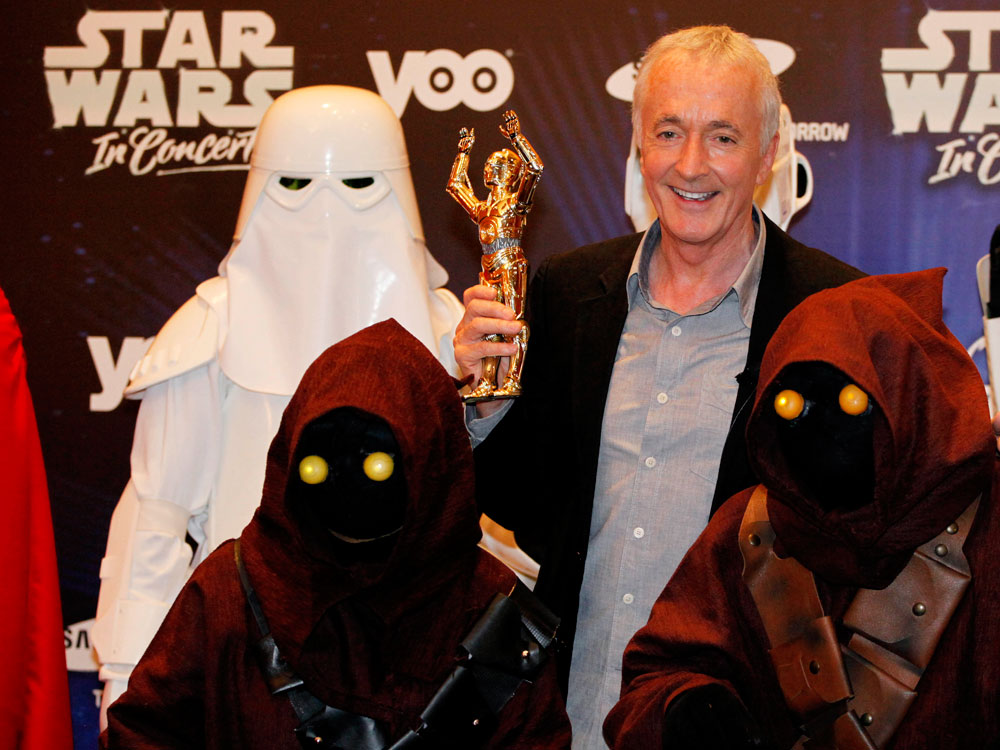 Anthony Daniels poses with a C-3PO figurine and other Star Wars characters while promoting Star Wars in Concert. The British actor narrates the show.

"I have a light saber -- it's a park saber -- and the costume itself I had somebody make for me, Cofelice says.

Fran Aslam, who was in the hall taking pictures of her three kids with a guy in a really detailed Darth Vader suit, had to think about what touched her about the movies.

"I guess just the possibility that it could be like that one day," she says. "Superheroes? Good over evil?"

Speaking of evil, the real Darth Vader is also here -- or at least his costume from the original movie.

"The cape is shorter for when he's running," Iskra explains.

There's also a Yoda -- in a glass case -- the actual, 7-foot-tall Chewbacca costume (made of yak fur that has to be brushed daily) and the original model of Han Solo encased in carbonite!

But it's the live music that blows the audience away.

Lucas Richman conducts John Williams' score -- and says he and the musicians have great respect for something that has touched millions.

"When the horn player plays the horn solo, it conjures up the feeling -- that emotional connection -- this is really that moment," Richman says. "I remember that moment in the movie and I'm playing that! That's one of the coolest things."

The other cool thing is seeing classical musicians being treated like rock stars.

The show's producers say they are working on adding new dates both overseas and in the United States.