Accessibility links
Second Collapse Kills Rescuers at Utah Mine Another collapse in the Crandall Canyon mine killed three rescue workers and injured six others Thursday night. With the fate of six trapped miners still unknown, rescue efforts have been suspended.

Another collapse in the Crandall Canyon mine killed three rescue workers and injured six others Thursday night. With the fate of six trapped miners still unknown, rescue efforts have been suspended.

A tragic setback for rescue operations at the Crandall Canyon mine in Utah. It appears another so-called bump or seismic jolt caused a cave-in last night. Three rescue workers were killed, six others injured. That stopped efforts to reach six coal miners who were trapped in the original collapse 11 days ago. Their fate: still unknown.

NPR's Jeff Brady is on the scene and joins us now.

Jeff, what's the latest? There are more than 130 workers taking part in the rescue effort. Have they all been accounted for?

JEFF BRADY: They have been accounted for. Last night when this bump occurred, no one was allowed to leave the mine until everyone was accounted for. And that's when they learned that nine people had been injured and of course since then we've learned that three of those people died. Overnight, three people were released from a hospital in nearby Price, Utah. We're still waiting to hear a word on the condition of the other folks.

HATTORI: Jeff, I guess the big question right now is how safe is the mine? When can rescue efforts resume? And is there a chance they may not resume?

BRADY: Well, no one knows how safe the mine is. But clearly there's problems up there. And the folks at Mine Safety and Health Administration are talking about that now, presumably, what they're going to do. And last night a spokesman for that agency said there is a chance that they may stop all rescue efforts inside the mine. Now, we have heard that that work that's taking place way up on top of a mountain, where they're drilling down into the mine, that work is still continuing.

HATTORI: That's to get the little access holes for further insight into what's going on down there?

BRADY: Exactly. Well, they're trying to reach those miners and establish communication with them, assuming that they're still alive.

HATTORI: The University of Utah says it's recorded at least 20 seismic events around the mine site since August 6th. And in fact a spokesman is saying that the mountain is literally collapsing in slow motion. Is that what it seems like to you?

BRADY: Well, it does seem like every day we're hearing about these bumps that the miners call them, where the earth is shifting around the mine. And these are violent events. The coal just shoots from the walls. We heard about yesterday, there's this thing called the continuous miner, huge 65-ton machine that continuously takes coal out of that mine. And after one of these bumps, it was half-covered in coal. It took them a couple of hours to dig it out.

HATTORI: The six trapped miners were working at the depth of 1800 feet. And some experts say that's a risky depth because it's approaching the load-bearing limit of coal. Do people there talk about the wisdom of mining at increasing depth? Is it all the matter of financial pressure to produce all the coal they can?

BRADY: Well, you know, I've talked to a lot of folks at nearby Huntington, Utah and the towns surrounding that. And folks here know a lot about coal mining because everybody has a family member who's worked in a mine. And they all feel pretty confident that this work is relatively safe. I mean, they know the dangers, but they feel confident that the engineers who have figured this stuff out are doing it right. Now, this particular case is raising a lot of questions that most of those folks still remain confident that their family members who work in the mines are being well taken care of.

HATTORI: And how have they reacted to this second accident? It must be a blow for the town of Huntington. How are they handling it?

BRADY: Oh, it's absolutely devastating. And especially since it comes just after we received this news that some sound waves had been detected inside of the mountain and the rescue organizers here said that that provided a little bit of hope. But for folks in town it might as well had been said that the miners were alive and that they were about to rescue them because people really latched onto that hope. And then to learn that three of the rescuers had been killed in the operation, it's just devastating.

HATTORI: NPR's Jeff Brady at the Crandall Canyon mine in Utah. Thanks. 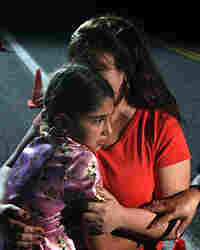 Maria Lerma hugs her daughter, Adilene, as they wait to hear news about her husband, Natalio, who was in the Crandall Canyon coal mine when it collapsed Thursday. Lerma reportedly escaped the mine without injury. Justin Sullivan/Getty Images hide caption

The underground effort to rescue six miners was indefinitely suspended Friday after a second cave-in killed three members of the rescue team that were tunneling toward the trapped men.

Richard Stickler, chief of the Mine Safety and Health Administration, said a powerful underground explosion caused by internal pressure dislodged 30 feet of the right rib of the mine wall Thursday evening. The blast destroyed the ground supports that were put in place to protect rescue workers. Stickler said the continuing movement of the mountainside has made the underground rescue effort extremely dangerous.

"We have suspended indefinitely the underground portion of this effort," he said at a news conference.

Stickler said rescue crews would continue to drill holes from outside the mountain in an effort to locate the men. When the men are located, rescuers could also use the holes to send food and water to the men and pipe fresh air into the chamber.

Stickler also said the men could be raised from the mine shaft if ground level operations are successful. It is not known if the men are still alive. They have not been heard from since the collapse.

Thursday's cave-in occurred at about 6:35 p.m. MDT after a "mountain bump" caused an explosion of rock and coal because of the pressure put on support pillars as rescuers tried to tunnel toward the trapped men. Seismologists have said such a bumb is also what caused the initial cave-in in.

Three people were killed and six were injured in Thursday's cave-in. One MSHA employee was among the dead and one was among the injured, Sticker said.

Before Thursday's cave-in rescuers had only dug 826 feet in nine days — leaving another 1,200 feet to go to reach the area where the men are believed trapped. Officials had said conditions in the mine were treacherous, and they were frequently forced to halt digging because of seismic activity.

A spokesman at the University of Utah, where seismologists are watching the activity, said it appears that the mountain is "collapsing in slow motion."

It was not immediately clear where the dead and injured were working or what they were doing at the time of the second cave-in. Crews have been drilling holes from the top of the mountain to try to find the miners while others were tunneling through a debris-filled entry to the mine.