Accessibility links
Death Toll From German Music Festival Rises Authorities in Germany are starting to investigate a deadly mass panic Saturday at the Love Parade, an annual techno music and dance festival in Germany. Nineteen people were crushed to death, and more than 300 were injured after a stampede in a tunnel. 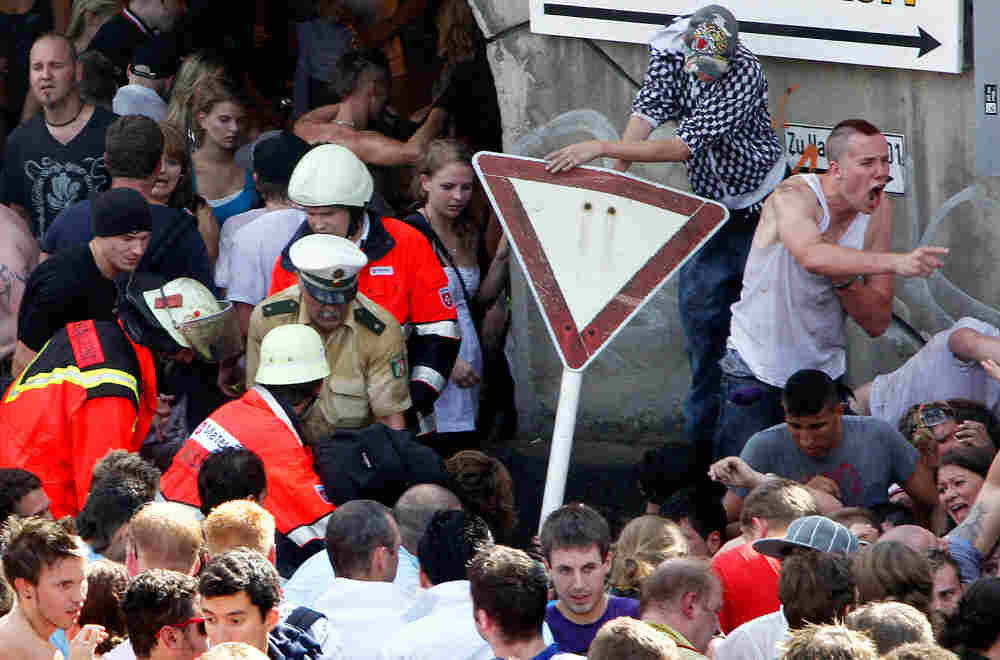 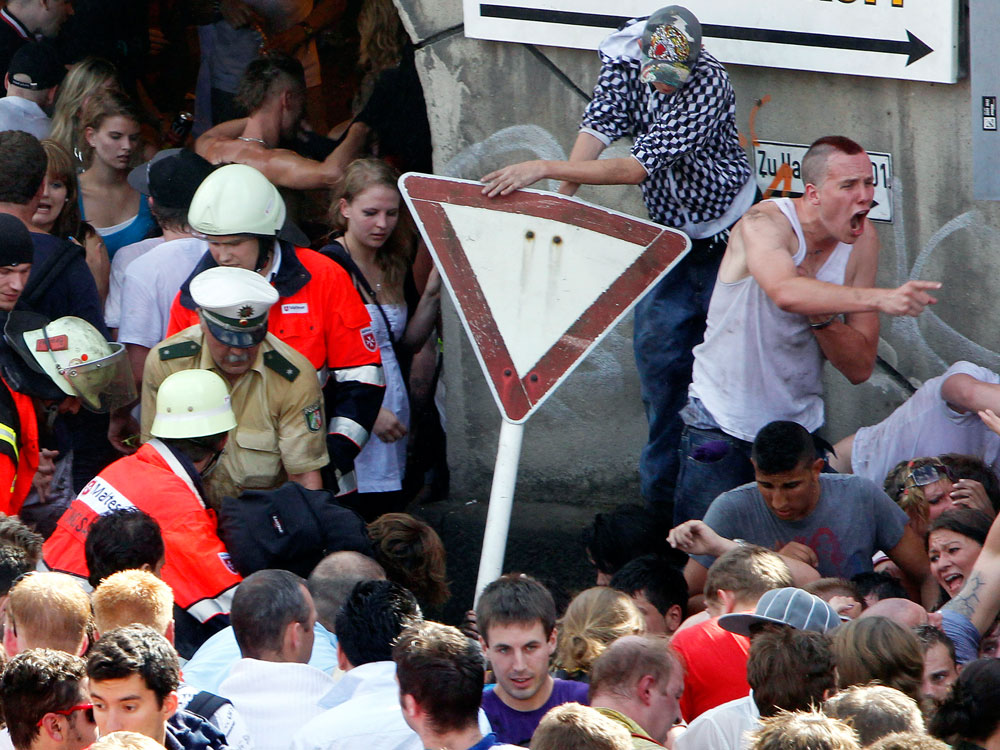 People try to leave the Love Parade music festival in Duisburg, Germany, after a stampede inside a tunnel killed 15 people Saturday. Chaos erupted after police tried to block thousands of people from entering the already-crowded parade grounds.

Authorities in Germany are starting to investigate a deadly mass panic Saturday at the Love Parade, an annual techno music and dance festival in Germany. The death toll rose to 19 on Sunday, and more than 300 were injured after a stampede in a tunnel.

Police and witnesses in the Western Germany city of Duisberg say the problems started when thousands of people converged from several directions on a large tunnel passageway -- the only entrance and exit to the festival -- after police closed the parade grounds because of overcrowding.

Using loudspeakers, police told people trying to enter to turn around and walk back in the other direction. Something sparked a panic in the tunnel and chaos ensued, crushing many of the victims to death.

Police and Love Parade organizers are already coming under harsh criticism that the party site was too small and local authorities were woefully unprepared for a free music festival attended by hundreds of thousands of people.

The founder of the Love Parade said it would never be held again.

"The Love Parade was always a peaceful event and a happy party" but would forever be overshadowed by the tragedy, Rainer Schaller said.

"It's over for the Love Parade," he said.

He spoke at a press conference where authorities faced tough questions, but provided few details, about why hundreds of thousands of people were funneled through the single highway underpass into the former freight railway station used to host the party.

German media reported that there were at least 1.4 million people at the festival, but police did not confirm that estimate.

Detlef von Schmeling, the police chief in Duisburg, said that 16 of the 19 people killed have been identified so far. He said they include an Australian, an Italian, a Chinese citizen and a person from Holland.

Von Schmeling said their ages ranged from just over 20 to 40.

Witnesses said officers in Duisburg, a city near Duesseldorf in western Germany, closed the end of the tunnel emptying onto the festival grounds after they become overcrowded around 5 p.m. They told revelers over loudspeakers to turn around and walk back in the other direction. But the entrance to the tunnel did not appear to have been closed and people continued piling in, sparking a panic and then a deadly crush.

Witnesses described a desperate scene, as people piled up on each other or scrambled over others who had fallen.

Partygoer Udo Sandhoefer told n-tv television that even though no one else was being let in, people still streamed into the tunnel, causing "a real mass panic."

"At some point the column (of people) got stuck, probably because everything was closed up front, and we saw that the first people were already lying on the ground," he said.

City officials chose not to evacuate the site, fearing it might spark more panic, and many people continued partying, unaware of the deaths.Rescue workers carried away the injured as techno music thundered in the background.

Other workers had trouble getting to the victims, hampered by the huge crowds. Local media reported that the cell phone system in Duisburg broke down temporarily and frantic parents trying to reach their children instead drove to the scene to look for them.

However, most streets downtown were blocked by police and the highways leading to the city were jammed. Several media outlets also reported that rescue helicopters had problems taking away the heavily injured because there was not enough space for them to land.

The founder of the Love Parade, Matthias Roeingh, known by the name Dr. Motte, blasted the planning for the event, saying "one single entrance through a tunnel lends itself to disaster. I am very sad."

German authorities also have not identified the victims yet, but the Dutch Foreign Ministry said that a 22-year-old Dutch man was among then.

German leaders, including Chancellor Angela Merkel, voiced shock that an event meant to celebrate youth, peace and love could turn so deadly.

"The young people came to celebrate and instead there are dead and injured," Merkel said Saturday. "I am horrified by the suffering and the pain."

It was the worst accident of its kind since nine people were crushed to death and 43 more were injured at a rock festival in Roskilde, Denmark, in 2000. That fatal accident occurred when a huge crowd pushed forward during a Pearl Jam gig.

The Love Parade, where people from across Europe gather to dance, watch floats and listen to DJs spin, was once an institution in Berlin, but has been held in the industrial Ruhr region of western Germany since 2007.

The original Berlin Love Parade grew from a 1989 peace demonstration into a huge outdoor celebration of club culture that drew about 1.5 million people at its peak in 1999. But it suffered from financial problems and tensions with city officials in later years, and eventually moved.

The website of the Love Parade — whose motto this year was "The Art of Love — went black on Saturday night, with words in white saying:

"Our wish to arrange a happy togetherness was overshadowed by the tragic accidents today. ... Our sincere condolences to all the relatives and our thoughts are with all of those who are currently being taken care of."