Accessibility links
Israel Haunted by Nuclear Threat from Iran Iranian President Mahmoud Ahmadinejad has, on several occasions, publicly called for Israel to be "eliminated." Some Israelis say that with Iran's nuclear ambitions and growing regional clout, the threat of a war between the two nations looms.

Fourth of a six-part series. 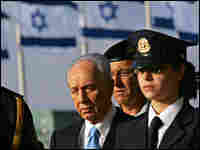 Escorted by guards, Shimon Peres arrives at the Israeli parliament in Jerusalem to be sworn in as the Jewish state's 9th president in July 2007. Peres says that if the major powers are united, a combination of diplomacy and economic sanctions can stop Iran. David Silverman/AFP/Getty Images hide caption 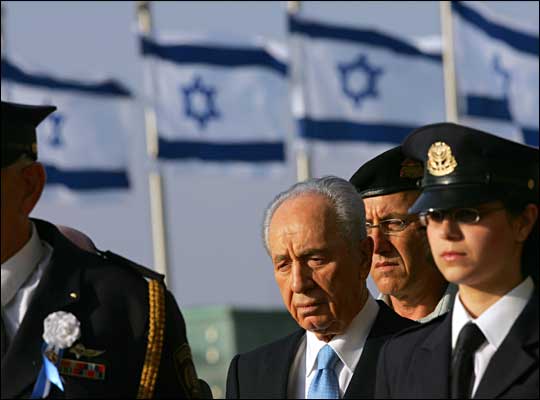 Escorted by guards, Shimon Peres arrives at the Israeli parliament in Jerusalem to be sworn in as the Jewish state's 9th president in July 2007. Peres says that if the major powers are united, a combination of diplomacy and economic sanctions can stop Iran. 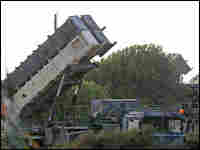 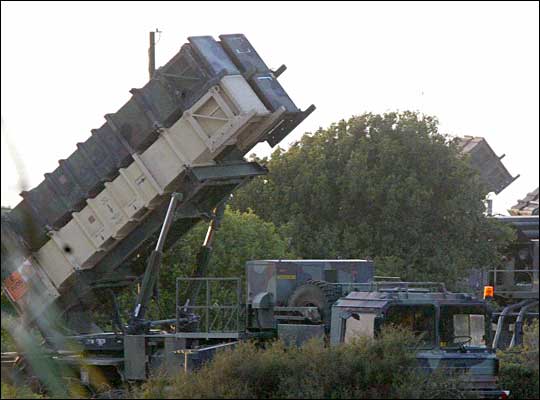 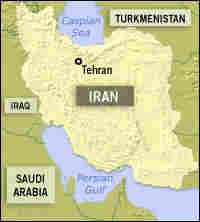 Iran is a Persian state in a region dominated by Arabs, and a Shia nation surrounded largely by Sunni states. Lindsay Mangum, NPR hide caption 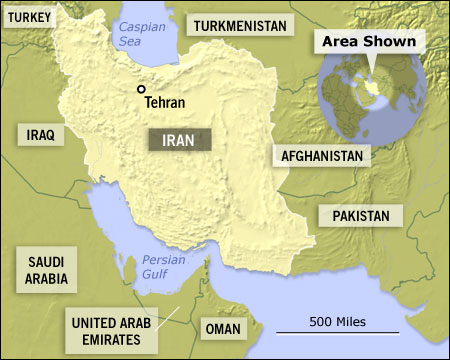 Iran is a Persian state in a region dominated by Arabs, and a Shia nation surrounded largely by Sunni states.

Iran's leaders, both before and after the Islamic Revolution, have seen their nation as the key regional power in the Middle East. But since the Islamic Revolution, Iran has been consistently unable to fulfill this ambition. In this series, NPR examines Iran and its relationship with its neighbors. Read an overview of the series.

Anxiety about Iran hangs in the air even in the often carefree culture of Tel Aviv's hip, secular neighborhoods. Hair salon owner Gilli Azouli says Iran and its ally Syria dominate customer conversations, and when Azouli tells customers about the special shelter he's building deep under his apartment building, they snicker — at least at first.

"They start to laugh," Azouli says. "After we speak for a couple of minutes, they don't laugh. They listen."

Azouli is convinced an Israeli war with Iran is looming. Maybe in a month, maybe a year, he says, but it's coming.

"Syria won't mess with us. They know what we have," he says, referring to Israel's still officially unacknowledged nuclear arsenal. But Iran, he says, is another story.

"Iran is different because they're fanatics. They think the Muslims have to rule all the world. It's a bit crazy," Azouli says.

So two and a half stories deep under the earth, Azouli is turning the standard Israeli safe room into a customized fallout shelter to protect his family. He's adding lead-plated walls and a state-of-the-art air filtration system that is able, in theory, to withstand a chemical, biological or perhaps even, he says, nuclear attack.

Azouli is not alone. Nowhere is the alarm and concern about Iran's nuclear program and growing regional clout more acute than in Israel. On several occasions, Iran's Holocaust-denying leader, President Mahmoud Ahmadinejad, has publicly called for Israel to be "eliminated."

Israeli leaders say that, today, Iran's nuclear ambitions and its well-armed proxies in Lebanon and the Palestinian territories pose the biggest security threat to the Jewish state. In the last year, Beit El Industries, the leading Israeli maker of nuclear, biological and chemical warfare defense systems, reports a 3,000 percent increase in business. The company's marketing director links the increase to growing concern over the Iranian threat.

Israeli military intelligence estimates that, if left unchecked, Iran will master the nuclear fuel cycle and begin producing nuclear weapons in as few as three years. The United States estimates that it will take Iran six to eight years.

Iran says its nuclear program is for peaceful, energy-generating purposes only, but Israeli officials are unconvinced that Iran and President Ahmadinejad will prove to be rational if Tehran gets the bomb.

Shimon Peres, Israel's president and most respected elder statesman, says that Israel must take President Ahmadinejad's bellicose rhetoric seriously. He says Iran can be stopped through a mix of diplomacy and tough economic sanctions – but only if the major powers are united and vigilant.

Peres cites North Korea and Libya as prime examples of places where a mix of sanctions and incentives worked to halt nascent nuclear programs, but many analysts say that Iranian political, religious and military elites — those pushing a nuclear program the hardest — have been relatively untouched by the first two rounds of U.N.-backed sanctions. A senior Israeli diplomat, who spoke on condition of anonymity, tells NPR he sees "troubling signs of a lack of urgency by the international community," noting that the next round of possible sanctions is unlikely to go to the U.N. Security Council before October.

Israel, like the United States, says that while diplomacy is the priority, the military option remains on the table. In 1981, Israel successfully launched a pre-emptive air strike on Iraq's nuclear installation at Osirak, dealing a major blow to Saddam Hussein's nuclear ambitions.

Targeting Iran's sites, however, would be much harder, says Iranian-born Israeli analyst Meir Javendanfar, "because they are dispersed, because they're in hardened shelters and because intelligence has been scarce with regards to those sites. And also, I'm guessing here, the Iranians have been working out a sophisticated disaster recovery system whereby if those sites are bombed, they will use that disaster recovery system to rebuild them very fast."

Military analyst and Army reserve Col. Ephraim Kam says that Iran would almost certainly hit back at Israeli targets and U.S interests, either through its Lebanese and Palestinian proxies or by directly targeting Israel's population centers with its long-range missiles.

"Iran said explicitly that if it is going to be attacked it will respond by firing the Shihab III ballistic missiles into Israeli territory. The range of them covers the entire territory of Israel including, of course, Tel Aviv," he says.

Israel's "Arrow" anti-missile defense system is now operational but untested in battle. Few believe it could stop all Iranian missiles.

Indeed, Israel had no technological solution to the Katyusha strikes launched by Lebanese Hezbollah during last summer's war. The Shia militia, which, by all accounts, gets significant funding, training and hardware from Iran, used short-range rockets to effectively counteract the Middle East's largest and best-trained army. Palestinian militant factions Islamic Jihad and Hamas, both Sunni Arab groups, also get some funding and support from Shia Iran, according to Israeli officials. Hamas now controls the Gaza Strip on Israel's southern border after militarily routing its U.S.-backed rival Fatah in June. These groups could prove a key strategic asset for Iran in any confrontation over its nuclear program.

With both economic sanctions and the military option uncertain and risky, some in Israel are now calling for a third way.

Ephraim Halevy, former head of the Mossad, Israel's foreign intelligence agency, and national security adviser to former Prime Minister Ariel Sharon, says that Israel needs to open up a diplomatic channel, quietly, as a vital tool to work alongside threats of force and sanctions. The former spy chief is convinced that direct dialogue, not a long ideological struggle, has the best chance to succeed.

"Our goal should be to prevail upon them so they realize it's in their self-interest not to pursue their present policy," Halevy says.

But others are skeptical of a diplomatic strategy.

"There's nothing to talk about," says a senior Israeli diplomat who spoke on the condition of anonymity. "The key now is for sanctions to cut to the bone ... only sanctions that target the Iranian elite will get this fighter to go down."