Accessibility links
A Novel Approach: Free Books For Donations The Concord Free Press has been publishing books and giving them away for the past two years. The Massachusetts-based publisher just asks readers to make a donation to a charity or a person in need and to chart the donation online. It also encourages readers to share the book with others. 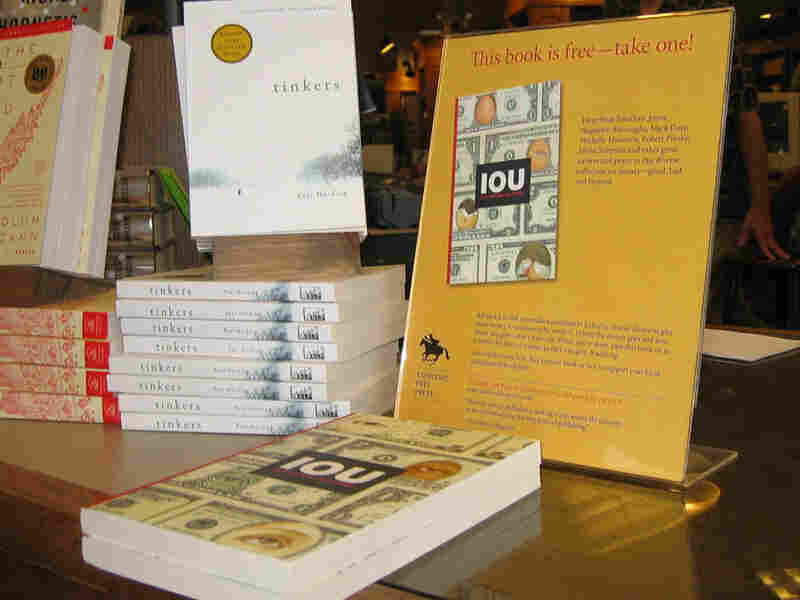 IOU, one of the books published by the Concord Free Press, is on display at The Concord Bookshop in Concord, Mass. As part of the publisher's generosity-based publishing model, patrons can take the book for free, but they're asked to make a donation to charity. Anthony Brooks/NPR hide caption 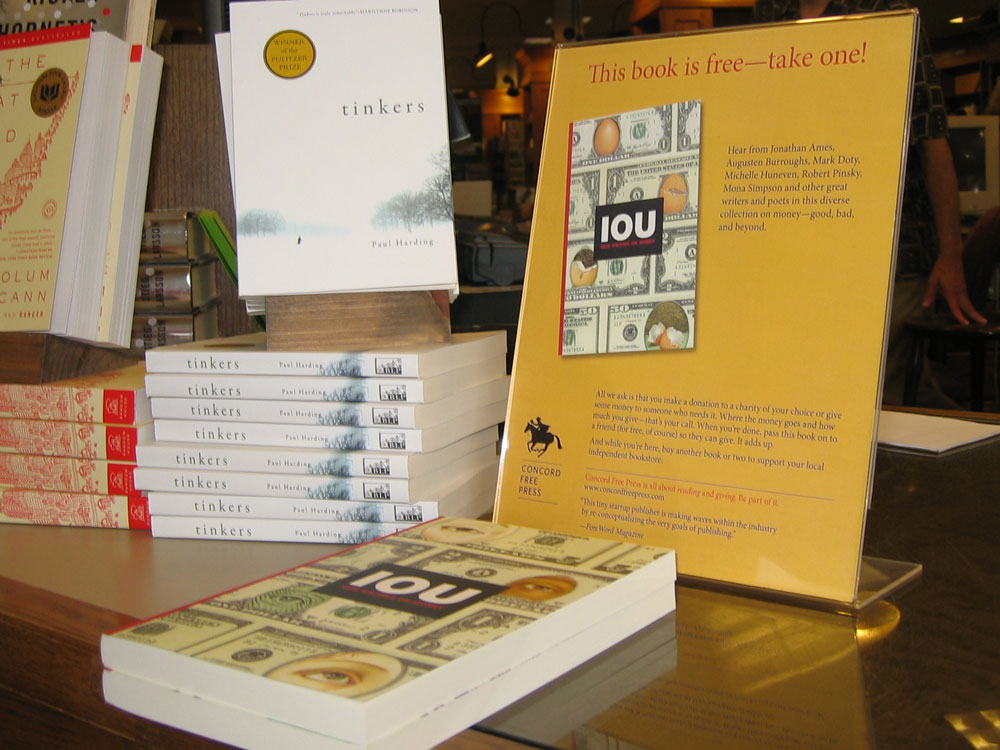 IOU, one of the books published by the Concord Free Press, is on display at The Concord Bookshop in Concord, Mass. As part of the publisher's generosity-based publishing model, patrons can take the book for free, but they're asked to make a donation to charity.

The Kindle, the iPad and e-books are all part of a revolution that's shaking up the publishing business. The big question is how to ensure the book industry can remain profitable?

There's at least one publisher, however, that doesn't care about profits. For the past two years, the Concord Free Press, has been publishing books and giving them away for free.

Writer Stona Fitch, the founder of the press, shows a reporter around the headquarters in Concord, Mass., just west of Boston. The tour takes less than a minute: It consists of two tables in an office.

Fitch says he's proud that one of his novels, Senseless, was judged by a critic to be "one of the most disturbing books ever written." His business plan isn't quite as disturbing, but it is radical.

Books from the Concord Free Press are available free at several dozen independent bookstores across the country or online. But customers are asked for something in return.

A Book In Exchange For A Donation

"We just ask people, one, make a voluntary donation to a charity or person in need; two, chart your donation on our website," Fitch says. "And three, pass the book along to someone else so that this project keeps going."

In the last two years, Fitch says readers have donated more than $142,000 to charity.

The tiny nonprofit relies on donations, and it has published four books, which look and feel like those you'd find at any bookstore -- except for a sticker that says: "100 percent off."

So, why give books away for free?

"You know, we're not saying all books should be free," Fitch explains. "We're just saying this is one way to put out a book."

He says he got the idea when he was having trouble publishing his fourth novel, Give + Take. Fitch says that, like many writers, he was on the verge of giving up.

"I had what writers know as an orphan book, an orphan novel," he says. "And I just considered why don't we just print it and give it away and ask people to give money to something they care about, and see if it works."

'The Death Of Publishing'

Hamilton Fish, the former publisher of The Nation magazine, says he was initially outraged about the Concord Free Press. He says the whole idea seemed at odds with his effort to get Americans to actually pay for books.

"And [Stona Fitch] was waltzing around inviting people to help themselves to the books that Concord Free Press was publishing free of charge," Fish says.

Fitch, of the Concord Free Press, says he recalls Fish saying: "'This is the death of publishing.'"

But Fish came around -- not because the generosity-based model of publishing represents the future of the book business. But because it is a new approach in an industry that Fish says needs fresh ideas.

"Obviously, the big publishing houses are facing tremendous challenges," Fish says. "Their financial viability is very much in question. We need as much innovation and independent spirit as possible."

Fish says giving books away might be one way to kick start sales for some authors. That's why author Wesley Brown published his latest book -- Push Comes to Shove -- with the Concord Free Press. He's hoping it will ultimately get republished for money, but in the meantime he's pleased that there are about 3,000 copies of his book in circulation.

Brown says it is "a writer's dream to be read that widely. And the other thing is the book generated over $40,000 in donations. So that was very heartening as well."

Fitch says it's an important time to rethink the value of a book.

"In an industry where nine out of 10 books don't make money anyway, the real issue is: What does the reader think the book is worth?" he asks.

He says the Concord Free Press puts that judgment in the hands of its readers.