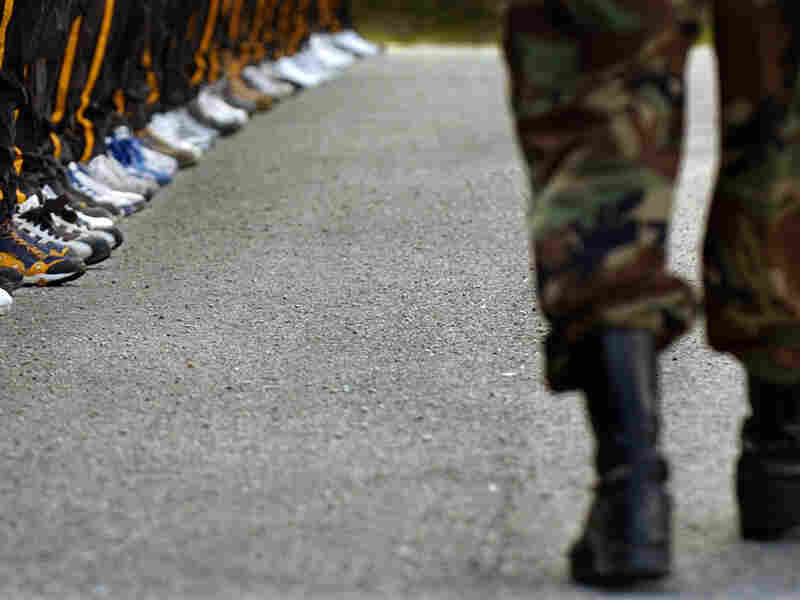 A drill sergeant passes a row of recruits -- many of them high school juniors and seniors -- headed into their first day of military life at the Army National Guard complex in Marseilles, Ill. Jeff Roberson/AP hide caption 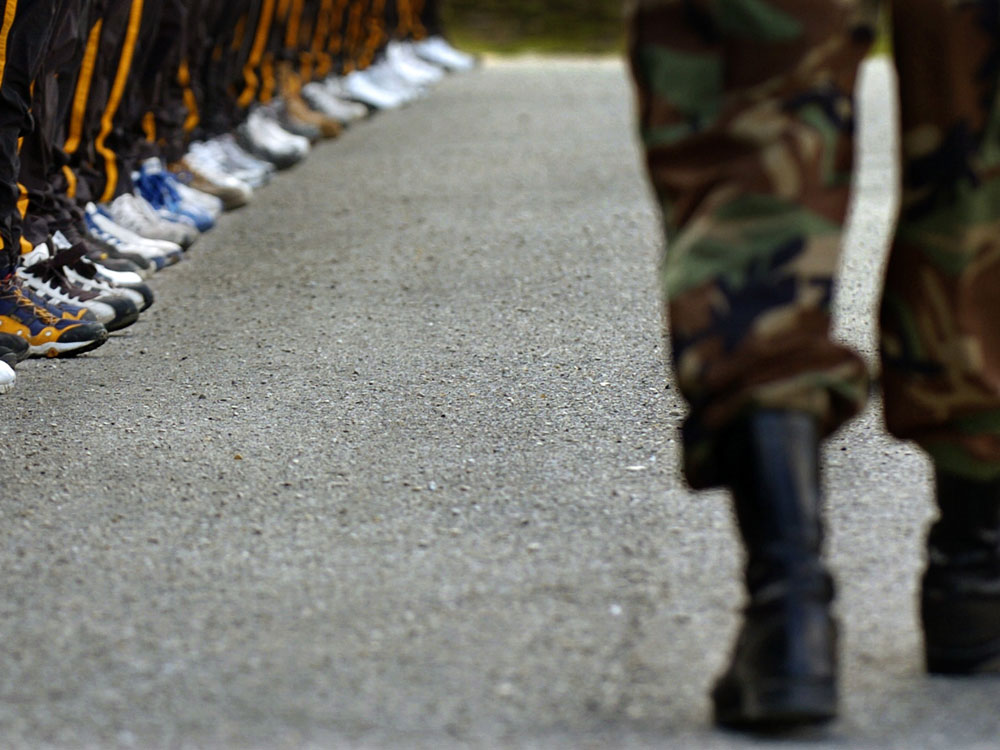 A drill sergeant passes a row of recruits -- many of them high school juniors and seniors -- headed into their first day of military life at the Army National Guard complex in Marseilles, Ill.

Maryland is now the first state in the country to bar high schools from automatically releasing students' test scores on a widely used aptitude test developed by the U.S. military to identify potential recruits.

The test is called the Armed Services Vocational Aptitude Battery (ASVAB), and many schools had been sending test results and detailed information about students directly to recruiters without parents' permission. Now, sponsors of the new ban in Maryland are pushing for a ban in other states.

"The parents have a right to know," says Sheila Hixson, who leads the House Ways and Means Committee in the Maryland Legislature. Hixson, a Democrat, pushed through legislation making Maryland the only state in the country that no longer allows schools to administer the ASVAB to a student without parental approval. It also prevents schools from releasing the test results to military recruiters without parents' or students' permission.

College junior Ross Scarshia isn't sure whether he told his parents that he had taken the 3 1/2-hour ASVAB back in high school in Laurel, Md. His school did turn over his test results to military recruiters.

Scarshia credits the ASVAB for helping him consider a military career. Not long after taking it, he started talking to his father about joining the Army, but his father was against the idea.

"He said if I joined the military, I would get shot," Scarshia says.

Hixson says it's wrong that Scarshia's parents were in the dark about their son taking the ASVAB and that his school released his results to recruiters.

With more than 600,000 high school students in Maryland and across the country taking the test every year, Hixson says she saw this as an issue of parental rights and students' privacy.

"We didn't criticize the test. We didn't ask them to change anything. That is not our role. Our role was to let the parents know, and that's all," Hixson says.

Curtis Gilroy, who oversees all active duty recruiting for the Defense Department, says the U.S. military has nothing to do with how school officials administer the ASVAB or release the results.

We didn't criticize the test. We didn't ask them to change anything. That is not our role. Our role was to let the parents know, and that's all.

"Whether or not a school official seeks students' or parents' or guardians' permission is entirely up to that school, and we don't have anything to say about that at all," Gilroy says.

There's no doubt, though, Gilroy says, that the ASVAB is very important to military recruiters, because it's a treasure trove of information about students, their talents and their skills.

"The ASVAB really is to the military what the SAT is to colleges and universities," Gilroy says.

That's why he worries about what Maryland has done.

"The Maryland law completely limits the release of scores, and it does create barriers to students to learn more about the opportunities and benefits of military service and careers," Gilroy says. "That is what is unfortunate about the Maryland law."

Critics say the ASVAB is a lot more than a "career exploration" test.

"It is perhaps the military's most important recruiting tool, period," says Pat Elder with the Maryland Coalition to Protect Student Privacy. The group lobbied vigorously to stop schools from automatically releasing the ASVAB results to recruiters.

"They're able to give a test to 650,000 kids every year, and they do so largely without parental consent. I mean, 92 percent of the kids who took the test didn't have parental consent," Elder says.

And even though the ASVAB is a voluntary test, Elder says more than 1,000 schools require it. The Pentagon could not verify this or confirm whether the 92 percent figure is accurate.

The Maryland Coalition to Protect Student Privacy, meanwhile, is advising groups in Wisconsin, Oregon, New Hampshire, Georgia, North Carolina and a few other states to require parents' permission before schools give students the ASVAB or release the results.

As for Scarshia, he joined ROTC after enrolling at the University of Maryland. After college, he hopes to serve in Iraq or Afghanistan. He says he just wanted to serve his country.

"And if a high school student really wants to do it, he should be able to make that choice. He shouldn't have to have his father's permission," Scarshia says.