Accessibility links
The Civilizations Buried Beneath Us Workers once tore up a Phoenix parking lot and found nearly 200 ancient human burial sites under it, evidence of civilizations in centuries past. Commentator Craig Childs explores those worlds by trying to map the ancient world beneath the modern one. 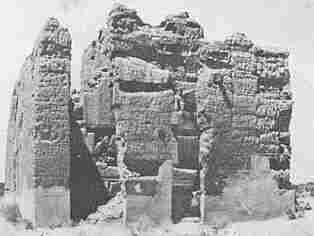 An 1846 photo of a Hohokam ruin in what is now Phoenix. Courtesy of Casa Grande National Monument hide caption

Craig Childs is author of the book Finders Keepers: A Tale of Archaeological Plunder and Obsession.

My hometown is greater Phoenix. Peel back just the top couple of feet there, and you'll find the remnants of a sprawling society of farmers who lived in adobe villages a thousand years ago.

I'm making a map of this buried city, matching it to grids of modern streets. I ride across Phoenix on a bicycle looking for subtle rises and dips in the ground. I search cul-de-sacs and strip malls for indications of old ceremonial mounds and adobe towers. I pinpoint some sites from maps made in the 1800’s. Back then, ruins were still standing across the valley. I hear of other sites from archaeologists or utility workers digging tunnels and trenches.

This fallen civilization is called Hohokam by its descendants, the Tohono O'odham people. It means "All Used Up." It's an apt description of a Southwest nucleus that all but disappeared in the fifteenth century. The Hohokam were likely victims of overpopulation, disease, and drought followed by floods. But before that, they flourished for centuries. They criss-crossed this desert valley with hundreds of miles of irrigation canals. They played ritualized games in ball courts throughout the city. An entire history began and ended in this place centuries before modern Phoenix existed.

As I bike around the city today, I find reminders of the Hohokam above ground, too. Boulders scribbled with rock art — circles, lizards and human figures looking out over crowded subdivisions. Pieces of broken pottery in vacant lots. Sometimes these shards of pre-Columbian jars or bowls are painted with fragments of red birds and spirals, dating back to the other side of history.

Once workers tore up a Phoenix parking lot and found nearly two hundred ancient human burial sites under it. Ceramic jars and finely crafted offerings were tucked among the dead, who rested beneath parked cars for decades. After hearing about that, I look at parking lots differently. I imagine the asphalt like a glass-bottomed boat. Skulls and bones and the blueprints of villages float below.

Now, as I pedal through the shimmering heat of the city, on-ramps and air-conditioned high rises gradually blur into Hohokam dwellings. Cars and pedestrians become farmers tending corn rows with long wooden tools and old men sitting in the shade. Children carry water, their bare feet padding along hard-packed ground.

We never live in just one time. A well of history rests in the ground beneath us. And sometimes, when the light is just right, you can see through to the other side.