Accessibility links
Size Matters: The Hidden Mathematics of Life : Krulwich Wonders... Can animal lifespan be calculated with a mathematical formula? Professor Geoffrey West and his colleagues at the Santa Fe Institute have found out not only why larger mammals live longer, but also how long they have to live. 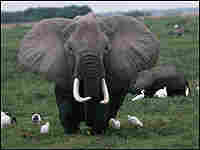 According to West, lifespan is connected to size. Elephants, for example, live longer than birds or field mice because the larger animals' hearts beat slower and use energy more efficiently. Pat Jerrold/Papilio/Corbis hide caption 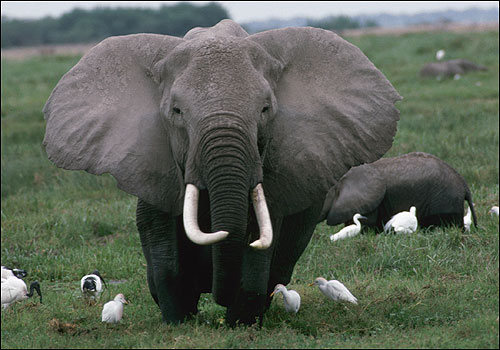 According to West, lifespan is connected to size. Elephants, for example, live longer than birds or field mice because the larger animals' hearts beat slower and use energy more efficiently. 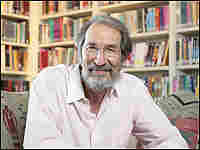 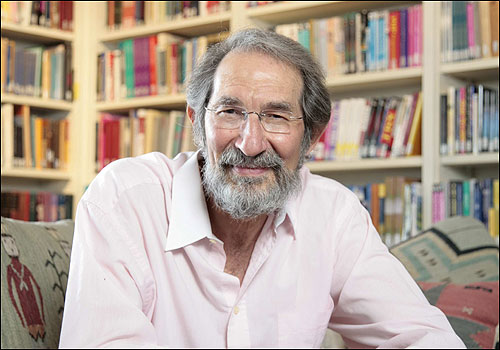 Geoffrey West is a researcher and heads the Santa Fe Institute.

Giant turtles, elephants and blue whales move through their lives with a slow grandeur that seems very different from littler creatures. Watch a hummingbird dart through a garden, or hold the smallest mammal, a little mouse-like shrew in your hand and you can feel it trembling with a feverish energy.

Compare an Elephant to a Teeny Shrew

Though big and little creatures look very different, below the surface there is a surprising unity. Biologists have compared the heartbeats of mammals and discovered that on average (this won't apply to any individual, just to groups) elephants and shrews and most of the critters in between have a limit of about a billion and a half heartbeats in a lifetime and then they die.

Now comes the subtler question: Why do big things use up energy more slowly?

A Secret Mathematical Unity to Life

Three scientists at the Santa Fe Institute, an interdisciplinary institute in northern New Mexico, took up this question a few years ago and discovered that if you compare elephants to lions to housecats to mice to shrews, you discover that heartbeats vary in a precise mathematical way.

The mathematical principal is called Quarter Power Scaling and it is described beautifully in "Of Mice and Elephants: A Matter of Scale," by New York Times writer George Johnson. But here is the heart of it: Nature goes easy on larger creatures so they don't wear out too quickly.

After all, an elephant has trillions more cells than a shrew and they all have to connect and communicate and distribute energy and keep the animal going. In a little animal, the job is easier. In a big animal, there are so many more blood vessels, moving parts, longer pathways, there is so much more work to do, the big animal could break down much more quickly.

The cells in an elephant slow down and do more work than the cells of a mouse. An elephant cell, lumpity-dumpities at a slower rate than the rattatat-tat of a mouse cell. They both wear out by a billion and a half beats, (yes, cells have metabolic or energy-using beats, too) but the elephant does it more slowly, all the way down to the cellular level.

When Professor West first saw this deep unity among living things, he was amazed.

Human beings used to fit into this pattern, but now that we have learned to drink safe water, wash and bathe and create medicines, we last longer than our size would predict.

And if you want, you can check out Professor West's latest observation: that big cities are like big animals. They are — deep down — more efficient than smaller towns and villages. Jonah Lehrer (one of my colleagues on NPR's Radio Lab) tells that story in "The Living City," found in the August issue of Seed Magazine.