Accessibility links
'Superbad': Adolescent Id, Awash in Hormones Sex talk, alcohol and the Jungian uberdork: The latest squirmy movie from Judd Apatow and Seth Rogen may just be the most provocative teen sex-comedy ever made. 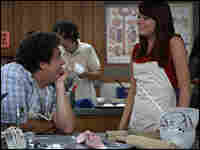 Superbad might be the most provocative teen sex-comedy ever made. I hedge because it's just opening, and the only ones provoked so far are nerdy male film critics. We love it!

Its heroes are graduating high-school buddies swimming in hormones and uncertainty. Seth, played by Jonah Hill, is blobby and loud. Evan, played by Michael Sera, is skinny and hysterical. Seth is a virgin and likely to remain so for some time but talks of nothing but sex — a nonstop stream of naughty words that would make David Mamet sit up and salute.

Evan is cuter and sweeter. Embarrassed by his friend's sexism, he talks of respecting women — not that he has been with any. Both look to an upcoming party for resolution. Their task is to procure alcohol, which Seth is sure will get them into bed. In the course of their odyssey, they plunge into a nightworld of sex, drugs and aggression.

The co-producer is Judd Apatow, the co-writer Seth Rogen, both of Knocked Up. Some conservative commentators pretzeled themselves up to praise their last collaboration, which had four-letter words and drugs and premarital sex but, hallelujah, came down on the side of family values.

The same is true of Superbad, but the pretzels will have to be even twistier. Apatow and company have a pipeline to the adolescent Id — and a little too much fun, if you're a moralist, frolicking in its hot springs of obscenity. If teens emerge from this film with the message that booze and sex and drugs can't buy them love, they might also feel the compulsion to talk dirty, drink, have sex and learn the lesson for themselves.

Besides Seth and Evan, there's a third major character in Superbad. His name is Fogell, he's played by newcomer Christopher Mintz-Plasse, and he is a dork. He is the Jungian overdork. Elected to buy the booze, he has created a fake I.D. — with the wildly optimistic pseudonym McLovin.

I believe "McLovin" will enter the lexicon. There will be McLovin fests, McLovin McLovin-ins.

Superbad is like American Graffiti with a crucial difference: The adults are more childlike than the kids. In George Lucas's paean to lost innocence, the teens sabotaged a police cruiser; in Superbad, two drunken cops, played by Rogen and Bill Hader, shoot up their car to impress McLovin, whom they've adopted after picking him up in a liquor store.

In a book, writer Christopher Noxon dubbed adults who don't want to grow up "rejuveniles," and Apatow is their impresario. But his celebration is double-edged. In search of alcohol, Seth and Evan stumble into a grown-up inferno where very weird things go down.

At close to two hours, Superbad feels 15 minutes too long, although the director, Greg Mottola, and the screenwriters Rogen and Evan Goldberg — hey, Seth and Evan, like the characters — they want to take you past the high to the inevitable plummet. No climactic American Pie couplings here. Instead: puke and loathing. The filmmakers linger on the homoerotic undercurrents of adolescent male friendship in a way that other teen sex comedies avoid like the gay plague.

That's what makes Superbad so vital--and of its time. In the '70s and '80s, even explicit teen sex-comedies like Fast Times at Ridgemont High unfolded in a culture with a fair amount of shame. Now, with American Pie as a touchstone, with MySpace turning even shy people into exhibitionists, filmmakers can begin where their predecessors ended.

Superbad takes place in a world in which everyone acts out. It suggests we don't have to worry about repression--but about having nothing left to repress.