Accessibility links
Movie Review - 'Dinner for Schmucks' - An Invitation You Can Safely Decline On paper, Dinner for Schmucks seems to have it all: a star-studded cast that includes reliable funnymen like Steve Carell and Paul Rudd, a veteran comedy director (Jay Roach) at the helm, and a premise lifted from a great French farce. But in reality, Schmucks is much less than the sum of its parts. 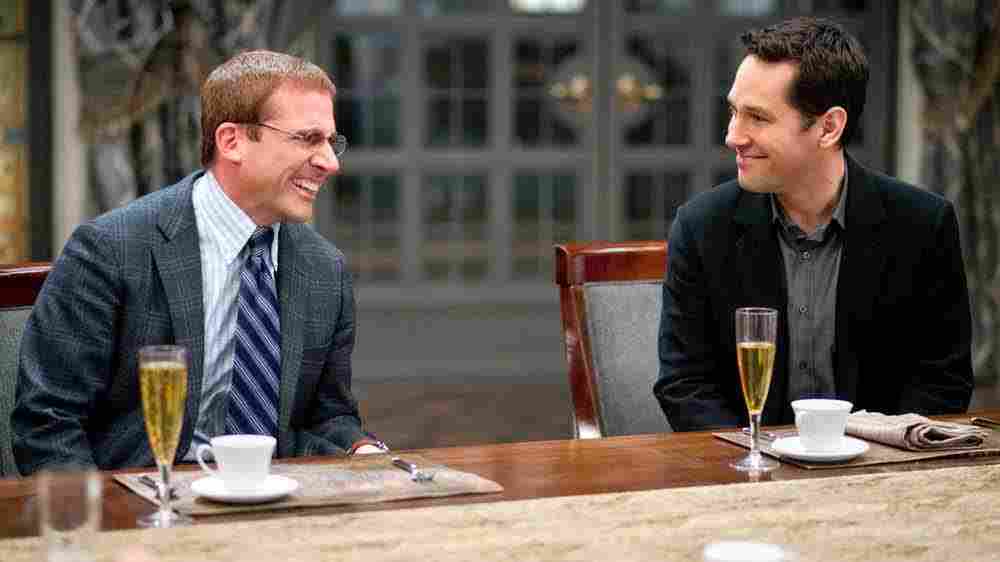 Rated PG-13 for sequences of crude and sexual content, some partial nudity and language.

When I reviewed the wonderful French comedy The Dinner Game more than 10 years ago, I worried that Hollywood might remake it. Now my fears have come true.

The remake, called Dinner for Schmucks, stars Steve Carell and Paul Rudd. It's a film whose noticeable lack of laughs is completely baffling.

Rudd plays Tim, an upwardly mobile young executive who gets an invitation from his boss to a very special dinner that will make or break his career.

"We call it the Dinner for Winners," one colleague tells Tim. In reality, though, the event is a cruel joke -- as Tim puts it, "You invite idiots to dinner and make fun of them."

Tim's choice of idiot is Barry, played by Carell. He's an IRS agent whose hobby is using tiny taxidermied mice, dressed lovingly up as humans, to create elaborate dioramas from art and history. These "mouseterpieces" are quite amusing, which is part of the problem: Any film where the mice are more appealing than the humans is in trouble.

The problem is that Carell's Barry is terribly misconceived. Yes, Barry is a man with no self-awareness and no sense of humor. But instead of being comedic, he comes off as a crazed and dangerous individual. He's a pest on a colossal scale, and the least amusing nominally comic character in memory.

Even with two great comics front and center, Dinner for Schmucks is distinctly unfunny, and a remake that should work falls flat. Thus pass the glories of the world.