Accessibility links
Human Connections Start With A Friendly Touch A simple, supportive touch leads to a surge of events in the heart, head and hormones. Studies suggest that touch can improve performance in students and athletes, make patients like their doctors more, and earn waitresses larger tips. 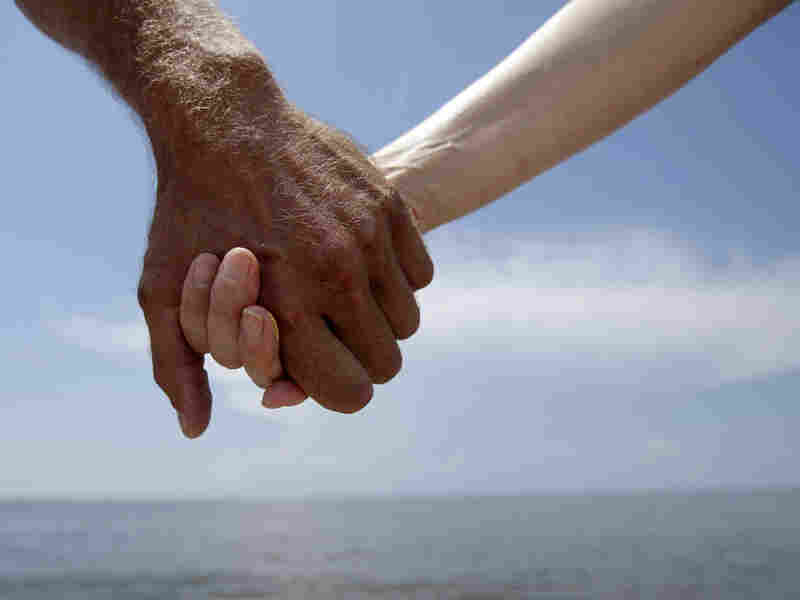 Hand-holding causes levels of the stress hormone cortisol to drop, says Matt Hertenstein, an experimental psychologist at DePauw University in Indiana. This couple joined hands while protesting offshore oil drilling in the wake of the Deepwater Horizon spill during a Hands Across the Sand event in Gulfport, Miss. Gregory Bull/AP hide caption 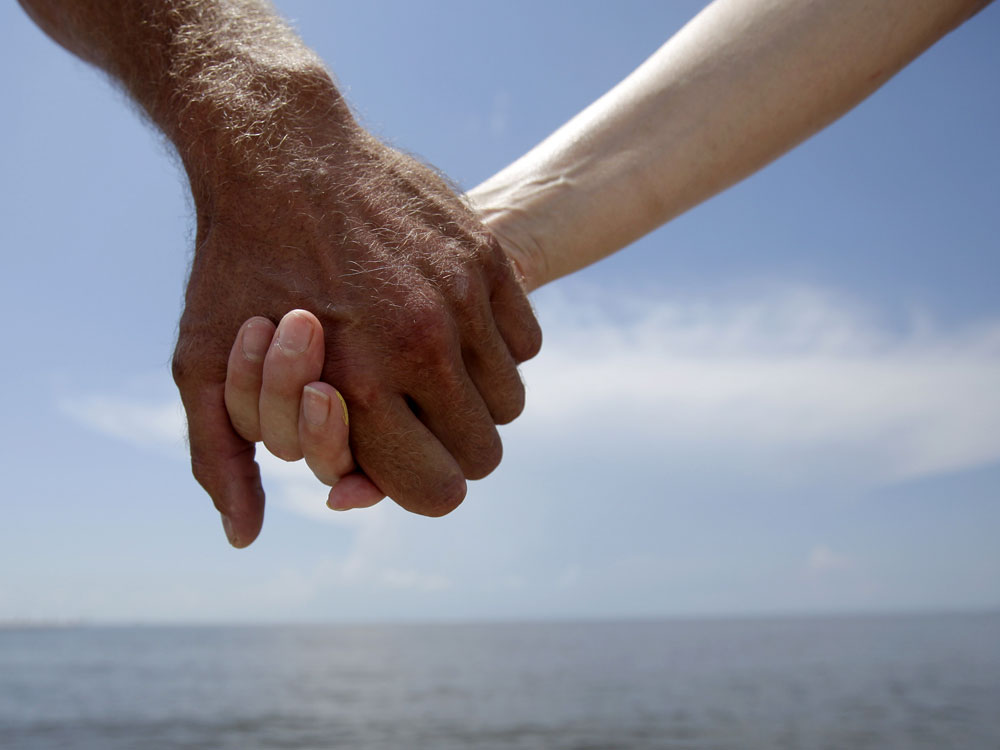 Hand-holding causes levels of the stress hormone cortisol to drop, says Matt Hertenstein, an experimental psychologist at DePauw University in Indiana. This couple joined hands while protesting offshore oil drilling in the wake of the Deepwater Horizon spill during a Hands Across the Sand event in Gulfport, Miss.

Social scientists have shown in many studies over the years that supportive touch can have good outcomes in a number of different realms. Consider the following examples: If a teacher touches a student on the back or arm, that student is more likely to participate in class. The more athletes high-five or hug their teammates, the better their game. A touch can make patients like their doctors more. If you touch a bus driver, he's more likely to let you on for free. If a waitress touches the arm or shoulder of a customer, she may get a larger tip.

But why does a friendly or supportive touch have such universal and positive effects? What's happening in our brains and bodies that accounts for this magic?

To understand this, we'll start on the outside -- with the skin. It's our largest organ, covering about 20 square feet, which is about the size of a twin mattress.

If somebody touches you, there's pressure pushing on your skin at the point of contact. And just under the skin are pressure receptors called "Pacinian corpuscles," says Tiffany Field, one of the world's leading touch researchers and the director of the Touch Research Institute at the University of Miami in Florida.

"They receive pressure stimulation," Field says, "and the pressure receptors send a signal to the brain."

The Pacinian corpuscles' signals go directly to an important nerve bundle deep in the brain called the vagus nerve. The vagus sometimes is called "the wanderer" because it has branches that wander throughout the body to several internal organs, including the heart. And it's the vagus nerve that then slows the heart down and decreases blood pressure.

Field describes studies in which subjects were asked to perform something stressful, like public speaking or taking a timed math test. The subjects' partners were also part of the experiment, hugging or holding hands with the subjects when the researchers told them to.

"They found that, in fact, people who were given this stressful task, if they'd been holding hands or being hugged, they would have a lower blood pressure and lower heart rate, suggesting that they were less stressed," Field says.

Hand-holding or hugging also results in a decrease of the stress hormone cortisol, says Matt Hertenstein, an experimental psychologist at DePauw University in Indiana.

"Having this friendly touch, just somebody simply touching our arm and holding it, buffers the physiological consequences of this stressful response," Hertenstein says.

In addition to calming us down and reducing our stress response, a friendly touch also increases release of the oxytocin -- also called the "cuddle hormone" -- which affects trust behaviors.

"Oxytocin is a neuropeptide, which basically promotes feelings of devotion, trust and bonding," Hertenstein says.

Oxytocin levels go up with holding hands, hugging -- and especially with therapeutic massage. The cuddle hormone makes us feel close to one another.

"It really lays the biological foundation and structure for connecting to other people," Hertenstein says.

Besides engendering feelings of closeness, being touched is also pleasant. We usually want more. So what's going on in the brain that accounts for these feelings?

Hertenstein says recent studies from England pinpointed an area in the brain that becomes highly activated in response to friendly touch. It's a region called the orbital frontal cortex located just above your eyes. It's the same area that responds to sweet tastes and pleasing smells.

"A soft touch on the arm makes the orbital frontal cortex light up, just like those other rewarding stimuli," Hertenstein says. "So, touch is a very powerful rewarding stimulus -- just like your chocolate that you find in your cupboard at home."

The surging of oxytocin makes you feel more trusting and connected. And the cascade of electrical impulses slows your heart and lowers your blood pressure, making you feel less stressed and more soothed. Remarkably, this complex surge of events in the brain and body are all initiated by a simple, supportive touch.