Accessibility links
Cheerleading A Sport? You'll Know It When You See It A judge has ruled that cheerleading is not a real sport, defeating a college's attempt to get around Title IX rules for female participation in sports. But what about the 64,000 high school girls who are on competitive "spirit squads" -- are they not athletes? 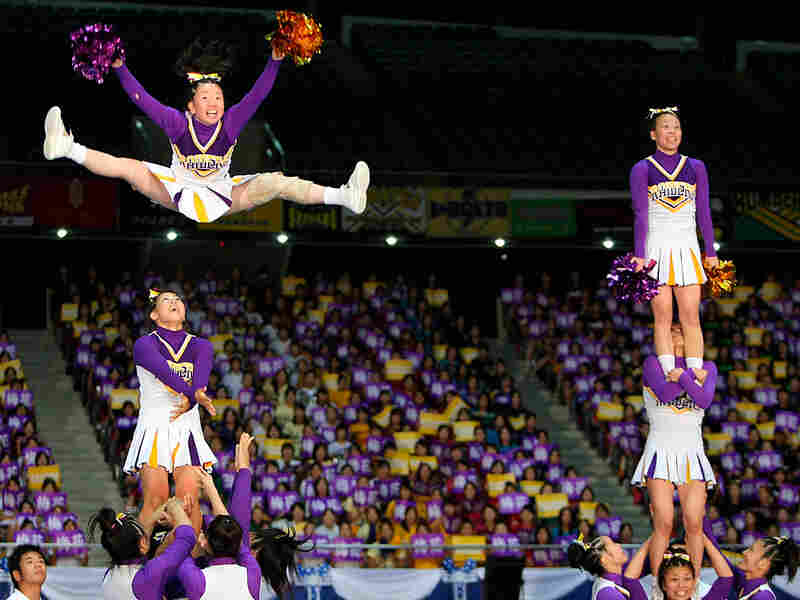 Someone Got Served: Like many sports, cheerleading championships have sprung up around the world. Here, the Baika Cheerleading Club Raiders perform during the Japan Cup Cheerleading Championship in Tokyo. Koichi Kamoshida/Getty Images hide caption 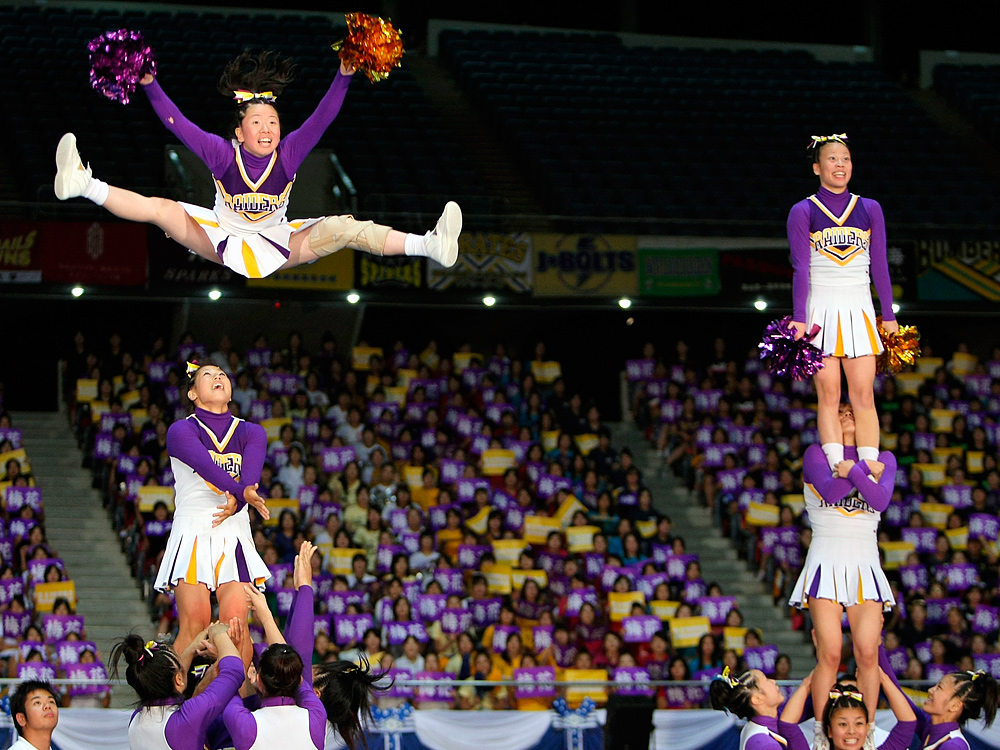 Someone Got Served: Like many sports, cheerleading championships have sprung up around the world. Here, the Baika Cheerleading Club Raiders perform during the Japan Cup Cheerleading Championship in Tokyo.

Two things that people love to ask me are: Is such-and-such really a sport? And: Are people who do such-and-such really athletes? Usually, I can tell that the people who ask me -- say, are race car drivers really athletes? -- don't like auto racing, and they are very piqued at me when I say, "Yeah, definitely, I think race car drivers are athletes."

Just because you are sitting down doesn't mean you can't be an athlete. As there are different artists, so too are there different athletes.

However, there is a widespread prejudice that only people who do something proficient while being vigorously active for long periods can be real athletes. Basketball, soccer and tennis players are usually held up as the standard.

But I think there are many physical abilities that qualify you as an athlete. Let's face it: You can be the fastest and strongest athlete in the world, but if you don't have hand-eye coordination, you can't be any good at baseball.

The sports that most people have their doubts about are the ones in which the athletes don't directly beat each other, but are judged.

Especially in Olympic years, people like to snicker and ask me, is synchronized swimming really a sport? Snicker, snicker. And I think, well, isn't it just like gymnastics or figure skating? They exercise, they get scores -- they're sports. I think, pretty much, that if you're employing physical attributes, you're being an athlete. Then, if you're competing against someone else, it's a sport.

Mountain climbers, for example, may be incredibly athletic, but I don't think mountain climbing is a sport.

This brings us to cheerleading. Is it a sport? It can be a very vigorous activity -- even dangerous, when cheerleaders fall. But of course, there is a particular form of cheerleading distinguished by halter tops and pompoms and is simply titillation.

While I'm all for being titillated, that is not a sport.

In schools, though, there are cheerleading matches, with scores, not pompoms. I judged a national collegiate cheerleading competition once. It was an eclectic panel. Dr. Joyce Brothers was next to me. It seemed like a sport to us.

But now a federal judge has ruled that cheerleading is not yet a real sport, even though 64,000 high school girls are registered in "competitive spirit squads."

It was a complicated case that forced this decision, wherein one more college -- Quinnipiac, this time -- was trying to get around Title IX stipulations. The more women who go to college, forming a greater majority of students, the more women's sports we must have, and that is hard for a lot of male athletic officials to deal with. All the more reason, it seems to me, to certify cheerleading.

But here is one hard and fast rule I would make: Any college that is put on any athletic probation -- like the University of Southern California -- for violating NCAA rules should not be allowed to have cheerleaders at any of its games. No cheerleaders for cheaters.