Accessibility links
In 'Four Fish,' Humans Get Schooled On Seafood Lifelong angler Paul Greenberg fuses investigative journalism, travelogue and personal memoir into one grand meditation on humankind's relationship with the ocean. Four Fish asks readers "to reevaluate whether fish are at their root expendable seafood or wildlife desperately in need of our compassion."

In 'Four Fish,' Humans Get Schooled On Seafood

In 'Four Fish,' Humans Get Schooled On Seafood 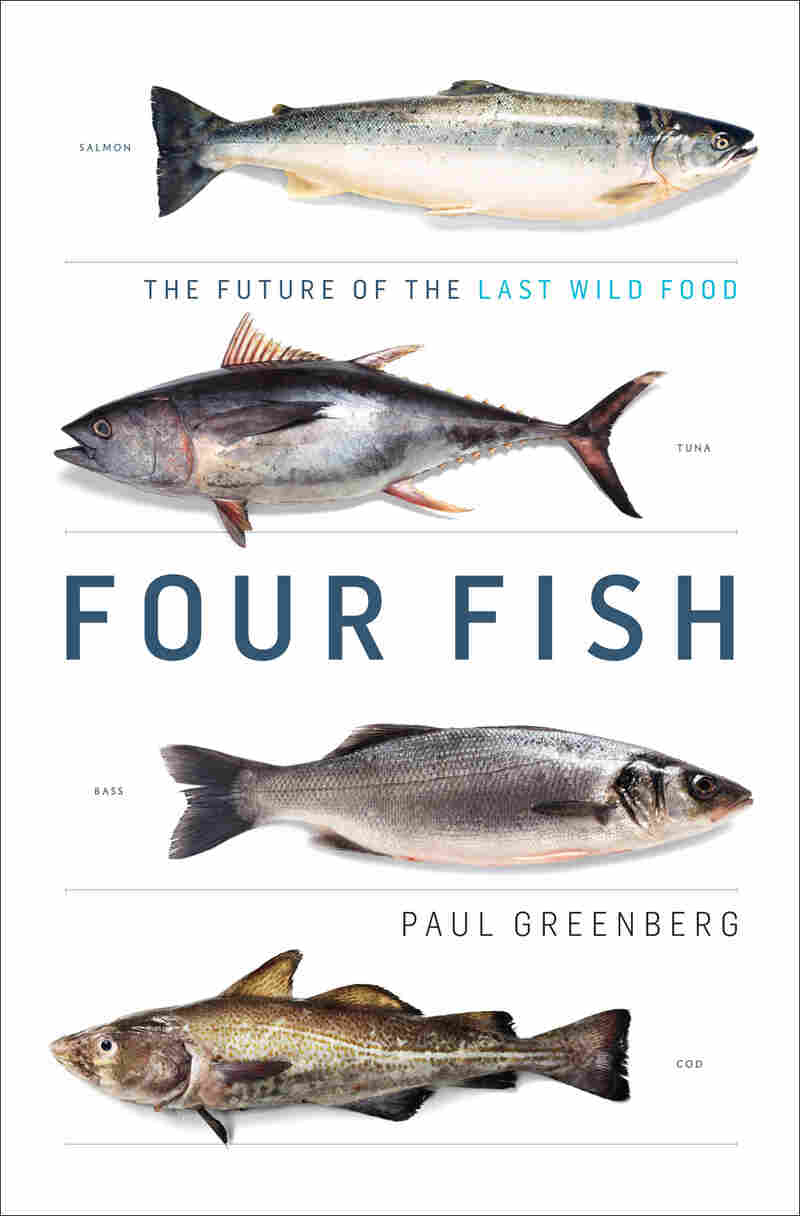 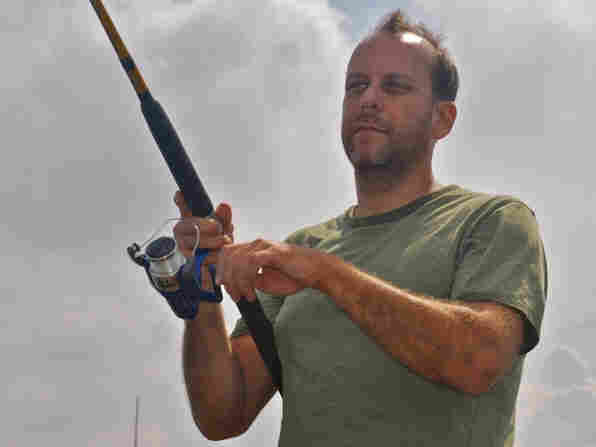 Paul Greenberg has been fishing since childhood and has written on the topic for The New York Times since 2005. His first book, Leaving Katya, was a fictional love story set during the collapse of the Soviet Union. Courtesy of Paul Greenberg hide caption 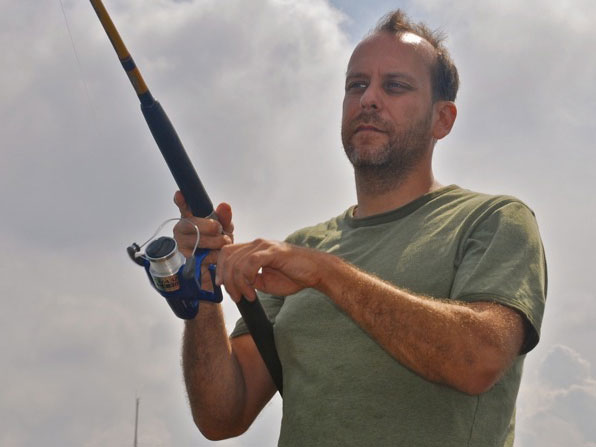 Paul Greenberg has been fishing since childhood and has written on the topic for The New York Times since 2005. His first book, Leaving Katya, was a fictional love story set during the collapse of the Soviet Union.

Whenever Paul Greenberg, a lifelong angler and writer about seafood, mentioned that he was working on a "fish-in-danger book," the question most often asked was which fish people should eat. Farmed salmon or wild? Is swordfish OK now? Is tuna sushi a bad habit? You'll find answers -- though perhaps not the ones you're expecting or hoping for -- in Four Fish, his excellent, wide-ranging exploration of humankind's relationship with fish -- the flesh that even many vegetarians consume.

You'll also find deeper questions about our need "to reevaluate whether fish are at their root expendable seafood or wildlife desperately in need of our compassion." In this passionate study, part investigative journalism, part travelogue, part personal memoir about fishing for wide-mouth bass as a boy in Connecticut, Greenberg asks, "Must we eliminate all wildness from the sea and replace it with some kind of controlled system, or can wildness be understood and managed well enough to keep humanity and the marine world in balance?"

Four Fish builds on Mark Kurlansky's pioneering 1998 microhistory Cod, but it's more than simply Cod-plus-three. Greenberg notes that, just as human consumption of mammals and birds has narrowed to four sources each -- cows, pigs, sheep and goats in the meat department; and chickens, turkeys, ducks and geese for poultry -- "four archetypes of fish flesh" have come to dominate our fish counters: salmon, bass, cod and tuna.

He examines each in turn, showing how humans have threatened them by overfishing, destroying their spawning grounds and upsetting their food chains. Much of this sorry situation is not, alas, news, but where Greenberg's book earns its stripes is in pulling together in one superbly researched and engagingly written volume an examination not just of the problem but of some of the (occasionally misguided) attempts at solutions. Salmon farming, for example, which Greenberg asserts "is in dire need of reform," has created its own well-publicized issues of pollution and contamination of wild stock.

Four Fish is not all doom and gloom. Greenberg notes that "unlike the terrestrial environment, the essential habitat of much of the world's marine life remains reclaimable." Careful management of existing wild stock and production of viable farmed alternatives through sensible polyculture are vital steps.

In evaluating the efficacy of fish farming, a crucial factor is the feed conversion ratio -- the number of pounds of feed it takes to produce one pound of edible flesh. Neither cod nor sea bass nor tuna -- which require as much as 20 pounds of feed for every pound of flesh -- have proven to be good candidates for farming. But Greenberg visits operations producing feasible alternatives, traveling to Vietnam to look into tra, a superproductive freshwater fish with a tolerance for high stocking densities, and to Hawaii to explore kahala, which he says tastes like white albacore. Rechristened Kona Kampachi for marketing purposes, these fish have a feed-conversion ratio of 1.7 to 1 and even approach "the holy grail of aquaculture," requiring less than a pound of feed per pound of flesh, "a potential net gain of marine protein."

So, what to eat? Not an easy question. Tilapia. Barramundi. Kona Kampachi. Sustainably harvested salmon caught by the Yup'ik Eskimo Kwik'Pak Fisheries in Emmonak, Alaska, the only Fair Trade-certified fishing company in the world. What to read is easier: Four Fish.

The more I thought of it, the more I realized that the four fish that are coming to dominate the modern seafood market are visible footprints, marking four discrete steps humanity has taken in its attempts to master the sea. Each fish is an archive of a particular, epochal shift. Salmon, a beautiful silvery animal with succulent pink flesh, is dependent upon clean, free-flowing freshwater rivers. It is representative of the first wave of human exploitation, the species that marks the point at which humans and fish first had large-scale environmental problems and where domestication had to be launched to head off extinction. Sea bass, a name applied to many fish but which increasingly refers to a single white, meaty-fleshed animal called the European sea bass, represents the near-shore shallow waters of our coasts, the place where Europeans first learned how to fish in the sea and where we also found ourselves outstripping the resources of nature and turning to an even more sophisticated form of domestication to maintain fish supplies. Cod, a white, flaky-fleshed animal that once congregated in astronomical numbers around the slopes of the continental shelves many miles offshore, heralded the era of industrial fishing, an era where mammoth factory ships were created to match cod's seemingly irrepressible abundance and turn its easily processed flesh into a cheap commoner's staple. And finally tuna, a family of lightning-fast, sometimes thousand-pound animals with red, steaklike flesh that frequent the distant deepwater zones beyond the continental slope. Some tuna cross the breadth of the oceans, and nearly all tuna species range across waters that belong to multiple nations or no nation at all. Tuna are thus stateless fish, difficult to regulate and subject to the last great gold rush of wild food -- a sushi binge that is now pushing us into a realm of science-fiction-level fish-farming research and challenging us to reevaluate whether fish are at their root expendable seafood or wildlife desperately in need of our compassion.

Four fish, then. Or rather four archetypes of fish flesh, which humanity is trying to master in one way or another, either through the management of a wild system, through the domestication and farming of individual species, or through the outright substitution of one species for another.

This is not the first time humanity has glanced across the disorderly range of untamed nature and selected a handful of species to exploit and propagate. Out of all of the many mammals that roamed the earth before the last ice age, our forebears selected four -- cows, pigs, sheep, and goats -- to be their principal meats. Out of all the many birds that darkened the primeval skies, humans chose four -- chickens, turkeys, ducks, and geese -- to be their poultry. But today, as we evaluate and parse fish in this next great selection and try to figure out which ones will be our principals, we find ourselves with a more complex set of decisions before us. Early man put very little thought into preserving his wild food. He was in the minority in nature, and the creatures he chose to domesticate for his table were a subset of a much greater, wilder whole. He had no idea of his destructive potential or of his abilities to remake the world.

Modern man is a different animal, one who is fully aware of his capability to skew the rules of nature in his favor. Up until the mid-twentieth century, humans tended to see their transformative abilities as not only positive but inevitable. Francis Galton, a leading Victorian intellectual, infamously known as the founder of eugenics but also a prolific writer on a wide range of subjects including animal domestication, wrote at the dawn of the industrialization of the world's food system, "It would appear that every wild animal has had its chance of being domesticated." Of the undomesticated animals left behind, Galton had this depressing prediction: "As civilization extends they are doomed to be gradually destroyed off the face of the earth as useless consumers of cultivated produce."

And that brings us to the present day, the crucial point at which we stand in our current relationship with the ocean. Must we eliminate all wildness from the sea and replace it with some kind of human controlled system, or can wildness be understood and managed well enough to keep humanity and the marine world in balance? 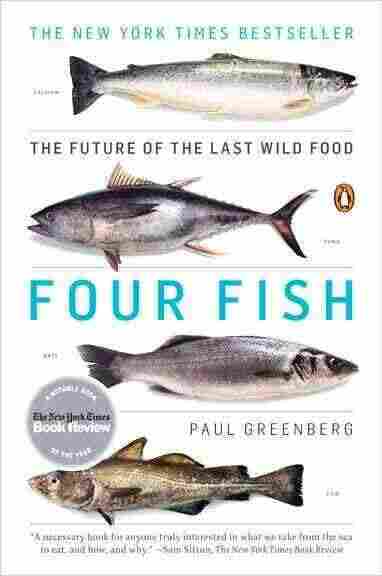