Accessibility links
No Survivors In Pakistan Jet Crash, Official Says The domestic plane carrying 152 passengers and crew slammed into the hills surrounding Pakistan's capital Wednesday morning as it attempted to land amid poor weather conditions, officials said. Two American citizens were among the dead, according to the U.S. Embassy.

All 152 passengers and crew aboard a Pakistani jetliner were killed Wednesday when the plane slammed into densely wooded hills just outside the capital, according to a senior government official.

The U.S. Embassy in Islamabad said two Americans were among the dead but gave no further details.

It's not clear exactly what caused Airblue Flight 202 to crash. The plane left the southern port city of Karachi at 7:45 a.m. local time for a two-hour flight to Islamabad and was attempting to land in cloudy and rainy conditions at the time of the crash, said civil aviation official Pervez George. 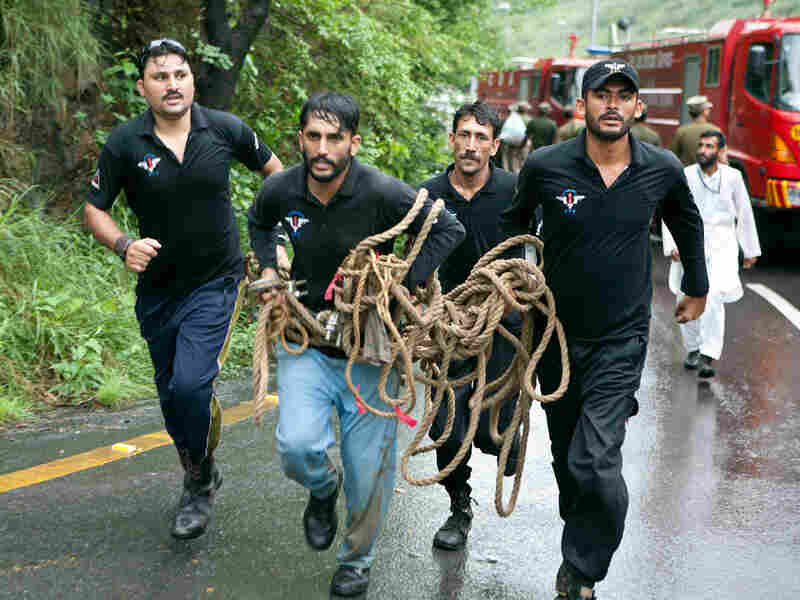 Rescue workers race toward the crash site in the heavily forested hills. Officials said the plane was flying from Karachi to Islamabad and was trying to land during difficult weather. B.K.Bangash/AP hide caption 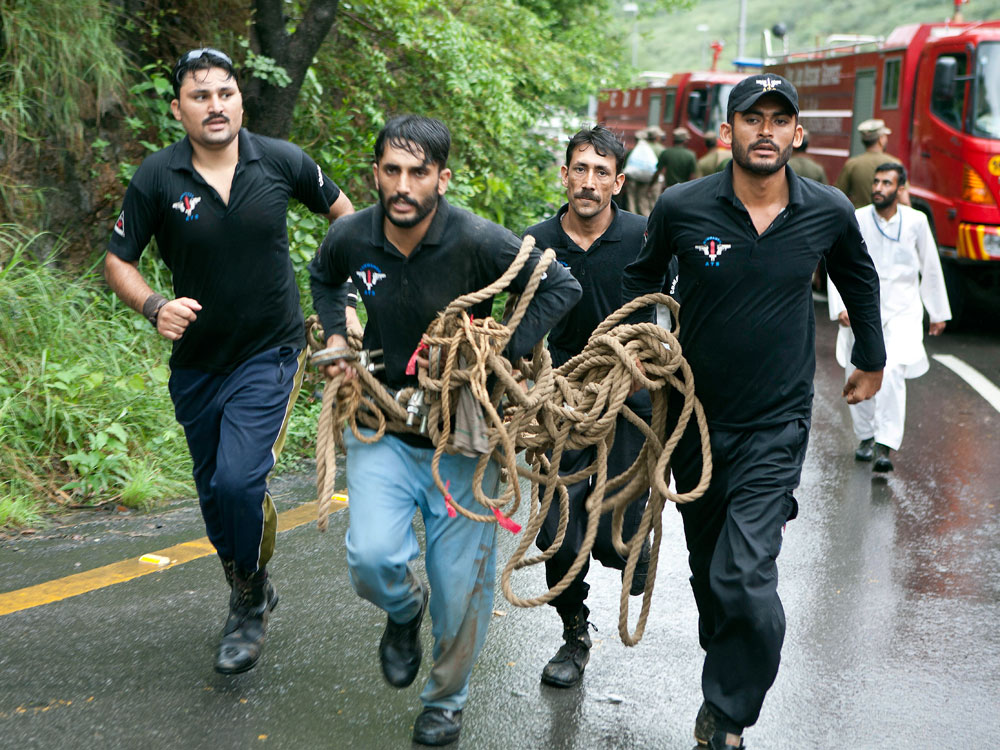 Rescue workers race toward the crash site in the heavily forested hills. Officials said the plane was flying from Karachi to Islamabad and was trying to land during difficult weather.

There were initial reports that five people had survived, but Interior Minister Rehman Malik later confirmed that everyone aboard had perished. Officials said terrorism is not suspected.

NPR's Julie McCarthy, who got close to the crash site in the Margalla Hills that skirt Islamabad, said the accident is being described as "among the worst air disasters in Pakistan."

"The wreckage fell on two sides of a steep hill in a deep ditch, and it spread for 400 yards," she said, noting that the area was "cloaked in fog but you could see white smoke billowing from the wreckage and flames lapping around the site."

A witness on the ground, Saqlain Altaf, told Pakistan's ARY news channel that he was on a family outing in the hills when he saw the plane looking unsteady in the air. "The plane had lost balance, and then we saw it going down," he said.

Officials had reported that the plane's flight-data recorder had been recovered, but the Civil Aviation Authority later clarified that the so-called black boxes had not been found and that efforts to locate them were ongoing.

No Survivors In Pakistan Airliner Crash

Pakistani television showed scenes of devastation -- twisted metal hanging from trees and scattered across the ground. A helicopter hovered above as rescue workers poured into the area. The army said it was sending special troops to aid the search.

"I'm seeing only body parts," Dawar Adnan, a rescue worker with the Pakistan Red Crescent, told The Associated Press by telephone. "This is a very horrible scene. We have scanned almost all the area, but there is no chance of anymore survivors."

McCarthy reported a rush of people trying to reach the crash site.

"Rescue workers, all volunteers, were streaming up with nothing in their hands. They had no equipment," she said. "Meanwhile, you had anxious relatives arrive at the scene who were angry that helicopters hadn't been mobilized more quickly to reach the scene."

Attempts to reach the crash site were hampered by muddy conditions and the smoldering wreckage, which authorities were having trouble extinguishing by helicopter, Adnan said.

The plane had lost balance, and then we saw it going down.

Saqlain Altaf, who was on a family outing

Minister of Information and Broadcasting Qamar Zaman Kaira said 106 bodies had been recovered so far, but that only about a dozen had been positively identified.

At the Islamabad airport, hundreds of friends and relatives of those on board the flight swarmed ticket counters, desperately seeking information. A large cluster of people also surrounded a passenger list posted near the Airblue ticket counter.

Airblue, a private carrier operating since 2004, posted a message on its website expressing "great sadness" for the loss. Airblue flies within Pakistan as well as internationally to the United Arab Emirates, Oman and the United Kingdom.

"We regret the loss of life and are investigating the exact circumstances of this tragedy," the message read.

The only previous recorded accident for Airblue is a tail strike in May 2008.

Raheel Ahmed, a spokesman for the airline, said the jet was no more than eight years old and had no known problems. The pilots did not send any emergency signals, he said.

Malik, the interior minister, told reporters that the pilot "was given directions to land either on runway I or II." He said, "The plane was at 2,600 feet before landing, but suddenly it went to 3,000, which was unexplained.

"If the visibility to the runway was so poor, then it should have been diverted," he added.

The Pakistan Airline Pilot Association said the plane appeared to have strayed off course, possibly because of the poor weather.

Airbus said it would provide technical assistance to Pakistani authorities investigating the crash. The aircraft was initially delivered in 2000, and was leased to Airblue in January 2006. It accumulated about 34,000 flight hours during some 13,500 flights, the company said.

Pakistan's last major plane crash occurred in July 2006 when a Fokker F-27 twin-engine aircraft operated by Pakistan International Airlines slammed into a wheat field on the outskirts of the central city of Multan, killing all 45 people on board.