Accessibility links
Dan Brown Wants You To Tell Him Where To Go In "Dan 3.0," the popular video blogger will ask his Web viewers what he should do with his life. And every day for the next year they'll be able to vote on the suggestions. "I have no freaking idea," what will happen, he says.

Dan Brown Wants You To Tell Him Where To Go

Dan Brown Wants You To Tell Him Where To Go

Dan Brown is turning his life over to you. 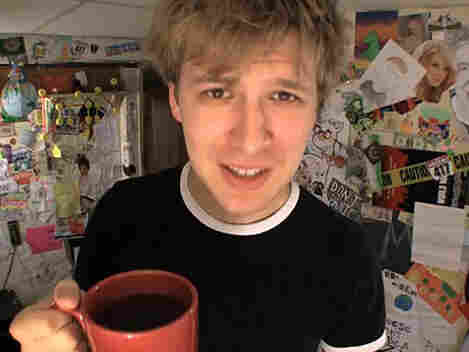 On his Pogobat YouTube channel, Brown's "Dan 3.0" project is about to launch. www.youtube.com/pogobat hide caption

Beginning Monday, Brown will be asking the viewers of his video blog what his goals should be -- for the day, for the week, for the month, maybe for longer.

It is a simple idea, born in this Twitterverse of social media where every decision, every life step, every thought and half-thought is broadcast to the world. Why not turn the process around and, rather than tell all of your friends and followers what you are going to do, ask them what you should do?

It's at once a slacker's dream -- abnegating responsibility for decision-making -- and an entrepreneurial foray. Brown will be making money from this venture. He won't say how much, but he has advertisers. Revision3, an Internet television company, will be broadcasting "Dan 3.0." And the daily videos will also be on his advertiser-subsidized Pogobat channel.

He will be living the sponsored life. He is his own product placement.

Opening up your life to the world is an ancient idea (in the Web world), dating at least back to 1996 or so, when Dickinson College student Jennifer Ringley put a webcam in her dorm room and began living her life in full view on the Internet. The idea flowed into a post-grad website, JenniCAM, that became an early Web sensation. People paid a modest fee to watch the immodest Ringley rumble around her small Washington apartment. She eventually pulled the plug on her website and returned to relative obscurity.

He is calling his project Dan 3.0. "What would happen if a video blogger decided to put complete control of his life in the hands of his viewers?" he asked the VidCon audience. "I have no freaking idea, but we're going to find out. Starting on Aug. 2, for one year, I am very literally putting complete control of my life in your hands."

Every day, Dan will ask his viewers: What can Brown do for you? He will allow viewers to suggest -- and vote on -- ideas for what he should be doing on a daily, weekly and monthly basis. "The best ideas will naturally rise to the top," he told VidCon. "The worst ideas will fall to the bottom and fade into obscurity."

The Dan 3.0 experiment "will be able to live and breathe and evolve any way that we want it to," he said.

On one hand, he added, "it absolutely is a silly little project I am doing."

On the other, he said, "in a lot of ways I also see it as something more significant. … Our generation has a lot on its plate. As we forge boldly ahead into the future, we are going to come head to head with issues like global poverty, global terrorism, global warming. These are issues that no one country or institution can take on unilaterally. Global-scale problems require global-scale solutions."

So, in a high-minded fashion, Brown sees Dan 3.0 as a way to crowdsource life decisions.

He continued: "By no means am I trying to insinuate that Dan 3.0 is going to solve all of the world's problems. It is an exercise in exactly the sort of worldwide collaboration that is going to be necessary to come up with innovative, creative solutions to the problems that we face."

Bob Garfield, media critic, author of The Chaos Scenario and co-host of On the Media, says Dan 3.0 "is a stunt, but more worthy of our attention than most. What this guy understands is that a connected world is an entirely different universe in which virtually every aspect of human endeavor is informed by the crowd."

The idea of building community, Brown says, came to him on a pogo stick. He got one for Christmas in 1999, when he was 9. He calls it "the most important gift of my entire life."

He learned to do tricks on his stick and, through the Internet, he discovered other pogo stick daredevils. They developed an online community at xpogo.com. In 2004, Brown organized the group's first Pogopalooza in Lincoln, in the parking lot of the church where his mother is a preacher.

Eight extreme pogoers -- from around the country -- showed up and showed off for one another and 30 spectators. The visiting athletes stayed in Dan's mom's basement. "What was cool about Pogopalooza," Dan told VidCon, "was the fact that this online community ... suddenly became an in-real-life community."

Through the Internet, Brown made friendships that will last a lifetime.

A few years ago, Brown got hold of a digital camera.

He made a short video showing people how to solve a Rubik's Cube. He uploaded it to YouTube and went to bed. When he woke up, he saw that his video had been viewed 35,000 times. The video also won the 2007 YouTube award for best instructional video. YouTube flew Brown to New York.

One night Brown stumbled upon a video clip about a soccer team from the United Kingdom that had turned its decision-making process over to its fans. The team went from being average to being really good, Brown said, and he wondered why an organizational model that makes so much sense -- and is possible in this World Wide Web world -- isn't used in more contexts.

Say, for instance, in everyday life.

Already, suggestions from viewers -- whom he calls the PogoTribe -- are coming in. "Get a haircut!" "Go take a nap, you look exhausted!!"

Oddly enough: No one has yet suggested that Dan Brown change his first name to Daniel or Danny so as not to be confused with the bestselling author. But then again, can the man who wrote Angels & Demons solve a Rubik's Cube while jumping on a pogo stick?