Accessibility links
Feds Peel Back Chrome On Motorcycle Gangs Federal investigators are working to infiltrate the closed societies of biker gangs and bring criminal cases against their leaders. Last month, agents arrested more than two dozen members of the Outlaws motorcycle club, charging them with weapons and racketeering offenses.

Last month, federal agents spanned out over seven states to arrest more than two dozen members of the Outlaws motorcycle club and charged them with weapons and racketeering offenses.

The case lifted a curtain on the violent lifestyle of one of the nation's largest outlaw motorcycle gangs. 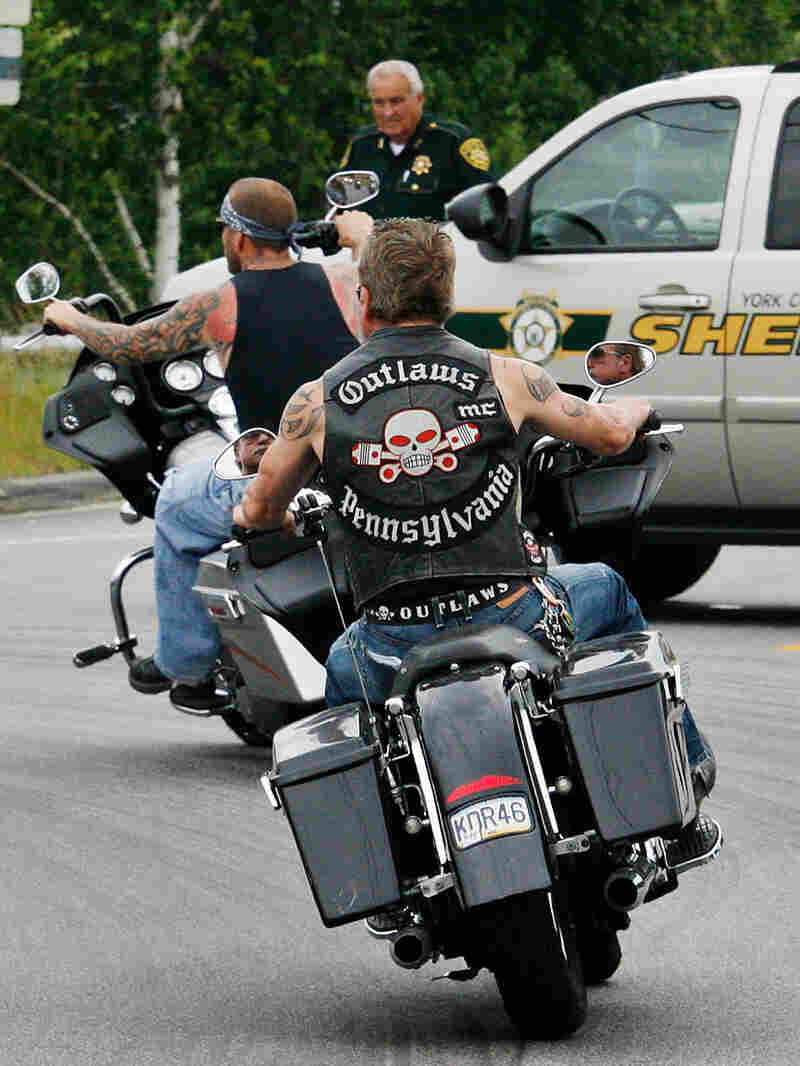 Members of the Outlaws motorcycle club pass a roadblock as they ride through Hollis Center, Maine. Club members gathered for a memorial service for Thomas Mayne, a club leader who was killed during a shootout with federal agents on June 15. ATF agents were trying to arrest Mayne in his home in Old Orchard Beach, Maine. Joel Page/AP hide caption

The gangs don't usually get much attention, aside from a cable television show called the Sons of Anarchy.

But far away from TV screens, investigators are working to infiltrate the closed societies of biker gangs and bring criminal cases against their leaders.

"The investigation shows this group was a calculated criminal enterprise that was involved in trying to take over territory, narcotics routes, gambling establishments, and to utilize the brand of the Outlaws to facilitate criminal acts of not only themselves but other clubs," said Rich Marianos, who supervised the Outlaws case for the Bureau of Alcohol, Tobacco, Firearms and Explosives.

Gang members follow a few simple rules: They have to be men ages 21 and older. They need to ride American-made motorcycles. They meet regularly in sessions they call "church," and they pay dues, usually $100 a month, to cover legal bills and funeral expenses.

Terry Katz investigates biker gangs and says guys who follow biker culture often pay with their blood. One biker in Maine, for instance, died in a hail of gunfire during the Outlaw arrests in June.

"It's a very, very violent existence," Katz said. "You're either going to die from a motorcycle wreck or from a rival gang. You're going to go to jail, usually for substantial periods of time. For them, they live for the moment. They would rather live a life of sex, parties, being treated like a celebrity, for moments ... rather than have a long-term plan of retirement."

New members work their way into the club by serving a kind of probationary period, running errands and sometimes breaking the law.

Neil MacBride, the U.S. attorney in the Eastern District of Virginia, said in court papers that Outlaws recognize each other through tattoos and patches they wear on their leather vests.

"One example is a patch with the letters G-F-O-D, which signifies God Forgives, Outlaws Don't," MacBride said. "Another patch they use reads, 'Snitches Are a Dying Breed,' which signifies the gang's commitment to identify, expel and, if necessary, murder individuals associated with the club who cooperate with law enforcement."

Earlier this year, Outlaw member Mark Lester told a television station in Knoxville, Tenn., that he has a right to meet and ride bikes with his friends.

"None of us are doing anything illegal," Lester said. "We're not a gang; we're a club. We ride and have fun together and that's what the organization is put together to do ... to have charitable events, help the community, and that's what we've been doing."

Lester is one of several former Outlaw leaders arrested this summer. He's now living in a Virginia jail while he and the others await trial in Richmond.

Along For The Ride

Defense lawyers for some of the Outlaws say the government is overreaching in its criminal case. They have signaled in court papers that they will challenge the portrait of the gang as a dangerous, criminal group. And they may argue that investigators entrapped the Outlaws into dealing and using drugs and violence to get their way.

In all, the Outlaws boast more than 1,500 members across the U.S. and a dozen different countries. Investigators say it's usually too dangerous or legally risky to rely on gang members to build a case. Instead, they try to plant undercover agents to go along for the ride.

That's what happened in the Virginia case against the Outlaws. Several undercover operatives became full-fledged members of the gang. They recorded conversations and tipped off police about violent confrontations in the works.

Edgar Domenich leads the ATF's Washington office. He said undercover operatives who sacrifice their own personal lives are essential to the ATF's operation.

"It only works when you have law enforcement undercover agents involved from the very inception," Domenich said.

The strategy poses some risks. Katz, the longtime gang investigator, says biker gangs have gotten sophisticated. Some use polygraphs and private investigators to check out new members. Others scour court records for evidence that applicants to the gang may have testified in a criminal case against bikers.

"More and more, they come to rely almost the way industry does on background investigations. And certainly with the Internet, it's easier to get a lot of information about an individual more quickly than it was when I did it," Katz said.

Prosecutor MacBride said that the Justice Department will continue to devote resources to biker cases because the gangs pose a threat to public safety.

"The press recently reported in New Hampshire the shooting of a teenage boy at a pizza joint who was caught in the crossfire between the Outlaws and other motorcycle gang members," MacBride said.

Investigators are still combing through assault weapons, bomb-making manuals, and Nazi flags they uncovered in searches of Outlaw property.

The audio version of this story confused the name of the fictional biker gang with the name of the lead character on the FX television show Sons of Anarchy. SAMCO is the acronym for the biker group; Clarence "Clay" Morrow is its leader.