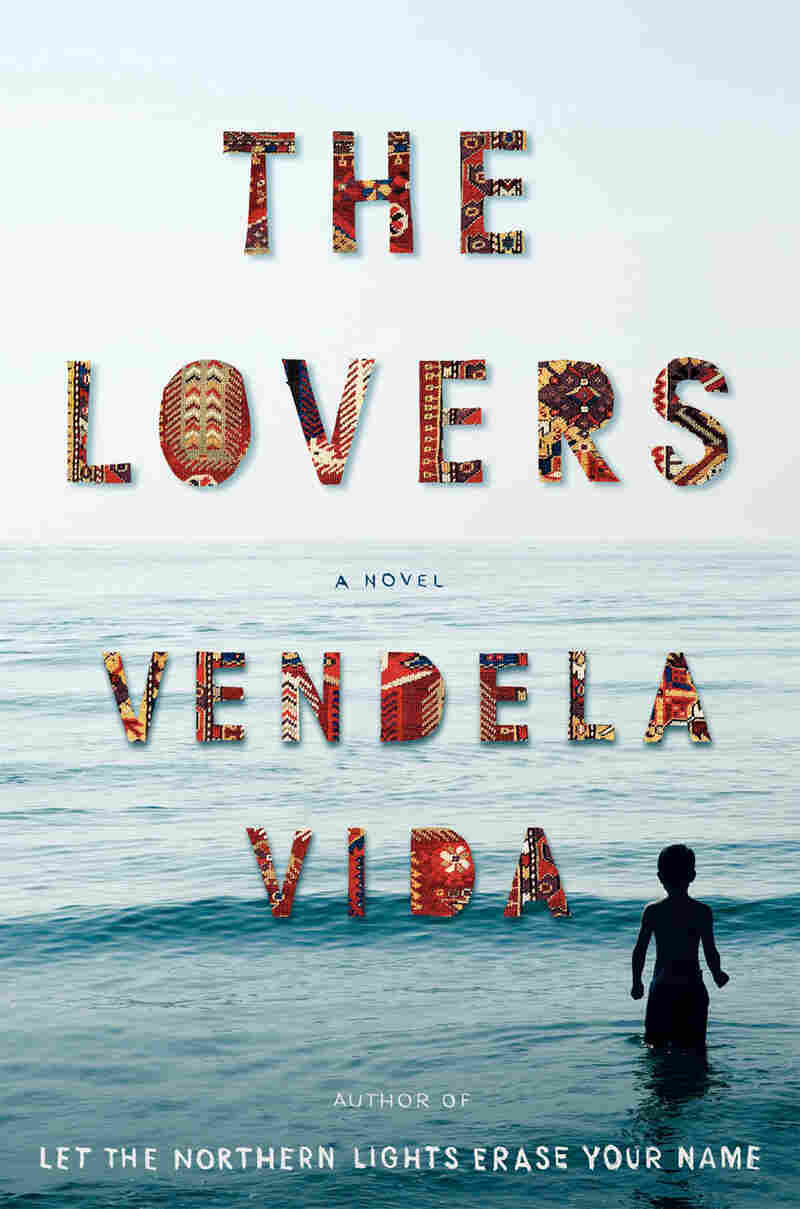 When half an hour had passed and there was still no sign of a white Renault, Yvonne began to fear she'd been scammed. Her flight from Istanbul was the last of the day, and the small Dalaman airport was beginning to empty. She stood outside, under a pink-veined sky, looking for anybody who appeared to be looking for her. There was no one but taxi drivers announcing, "I take you," or miming the equivalent. She reentered the terminal, hoping she'd missed seeing Mr. Celik's employee, who, she'd been told, would be holding a piece of paper bearing her name. But the only visible sign was a large poster on the wall: turkey -- where east meets west. On the poster two figures, each holding a briefcase, were walking toward each other on a bridge.

She opened her laptop to consult her last e-mail from Mr. Celik, and immediately regretted it. A pair of young men in tracksuits were staring at her. Now a woman pushing a mop was also looking her way. Peter would have disapproved; they had traveled to nine -- ten? no, eleven -- countries during their twenty-six years of marriage, and he had been proud of their ability to go unnoticed. This was her first trip since his death, and already she was breaking their rules.

The laptop had been a present from her son and his fiancée, and Yvonne was sorry she'd brought it. She was sorry she owned it. She carried it with her into the ladies' restroom, where, alone, she propped it on the sink counter. She was troubled to discover she was not mistaken: Mr. Celik had last written to say she would be picked up by one of his employees at 19:30, on the fifteenth of June, outside the Dalaman airport, and be driven to the house in Datca. His e-mail also confirmed he had received the thousand-dollar deposit she'd wired into his account. A thousand dollars! What a fool she'd been to wire so much money to secure a vacation home she'd seen only on a website. She carefully wrote down Ali Celik's phone number on the back of her boarding pass, slipped her computer into her bag, and left the restroom. There was no pay phone in sight.

Outside in the shadeless parking lot, the heat felt thick, as though it had been compacted by the hours of the day. Not wanting to offend conservative Turks, she had flown in a loose, long-sleeved blouse and a skirt that reached beneath her calves -- an outfit she had discovered was both stifling and unnecessary. No one on the plane from Istanbul wore a head scarf. The Turkish women, most of them young and wealthy, were dressed in jeans and sequined T-shirts and high-heeled sandals. The rest of the seats were occupied by British post-grads in sundresses, Turkish men in long shorts, and Norwegian girls with tight bright shirts and nondescript boyfriends.

By the parking lot there was a narrow cafe and newspaper kiosk, where Yvonne asked the cashier if she could make a call. She showed him the number and he pulled a black phone out from behind the bar and dialed for her. A small act of mercy -- she didn't know which numbers to leave off the long row of digits.

She was surprised when a voice answered.

"Oh good, it's you," he said. His accent was negligible.

"My man has been looking for you!" Mr. Celik said. "Where are you?"

"Just outside the airport. At the cafe."

"You came out on the wrong side of the airport."

"There's another side?" she asked. "I'll walk over there."

"Please. No. You stay there. I'll call and have him come around."

From the plane, Yvonne had been mesmerized by the Mediterranean, its texture like chiffon. It reminded her of a play her twins had been in when they were young. Aurelia and Matthew had each held one end of a large swath of blue iridescent material, and alternated lifting and lowering it with their tiny hands. The play was called The Ocean.

Now, as she stood in front of the café, Yvonne couldn't see the water, but she could taste the salt in the air. A white car sped up and stopped, and not one but two men, one tall, the other taller, emerged. They looked too big for the small car.

"Hello!" she said, as though she was the one welcoming them to her country. Both men nodded.

The driver lifted her suitcase from her side and placed it in the backseat. He ceremoniously held the door open for her and she slid inside. The seat was warm and sticky.

"He doesn't speak English, so I am here to translate," explained the man in the passenger seat. "He work for Mr. Ali Celik. His name is Mehmet."

Yvonne asked the interpreter what his name was, and when she couldn't understand his response, she asked again, and then gave up. "How long is the drive?" she said instead.

"Three hours, maybe not so much. They remake the roads, so maybe longer or smaller. We stop for coffee."

The car started. The men spoke to each other and laughed and Yvonne sat in the back, next to Peter's old Samsonite. This was her companion now.

Through the window Yvonne saw rows of squat palm trees and turquoise minarets. The car slowed through the town of Marmaris and passed by an endless strip of bars, many with British flags and sunburned, sandaled tourists sitting outside, drinking beer from narrow glasses.

After Marmaris there were short stretches when water was visible, until the sun, which had been making a drawnout exit, finally dropped. Then, only shapes, sounds -- the occasional house, a barking dog. Yvonne and the two men moved quickly: the moment they reached something they left it behind. She was having difficulty understanding how the trip could take even two hours at the speed they were traveling, but suddenly, after passing no particular town or landmark, the road was unpaved, and she could feel every bump, every kilometer. "We are on DatCa peninsula now," the man in the passenger seat said, turning his dented chin in her direction. "Datca the town is near the end."

Yvonne nodded into the sepia darkness. Soon after, the car pulled into a lit and landscaped area, a restaurant with only outdoor seating. The men ordered coffee and Yvonne ordered an orange Fanta.

"How do you say thank you?" she asked the interpreter as they walked to a table.

"You are welcome," he said, and laughed.

They sat at a picnic table near a short bridge that spanned a small pond. Around them, at other tables, round and square, sat couples on dates and large groups of men laughing and smoking unfiltered cigarettes. The scent was both aged and ripe.

Mehmet said something and his friend translated: "Mr. Celik is a very powerful man."

Yvonne shrugged. "I don't know much about him."

They looked at her, as though wondering how it was possible that she was unaware of Mr. Celik's power.

"What do you know about Turkey?" Mehmet said.

"Well, a few things," she said. "I know it's one of the most beautiful countries in the world." Mehmet's friend smiled and translated her words. Mehmet nodded. In her travels, Yvonne had yet to meet anyone, in any country, who argued with the assessment that their country was among the most beautiful.

"I know that Turkey hasn't been allowed into the EU."

Mehmet understood EU and he and his friend began a private discussion that seemed to escalate into an argument.

The men continued their heated discussion in Turkish. Yvonne thought she heard Armenia, but she couldn't be certain. The interpreter seemed to be finding English more difficult as his frustration grew, and his attempts to include her in their conversation dwindled.

The exclusion was a relief. Yvonne pulled up the sleeves of her blouse and tucked her skirt between her knees so the warm air could touch her skin. She was enjoying the role of being the observer rather than the observed. It was only now, while sitting at this roadside restaurant on the Datca peninsula, that she fully comprehended the claustrophobia she'd experienced for the past two years. She had been under surveillance, in the way that was particular to new widows. The faculty at her high school, her students, her neighbors, the dry cleaner, the clerks at the video store -- especially the clerks -- had all been watching her. "How are you?" was no longer a casual question, for an ambivalent response from Yvonne could inspire gossip, which in turn triggered unsolicited phone calls and concerned visits.

Recently, whenever she was asked how she was spending a weekend, she had resorted to lying, claiming her kids or some unnamed cousins were coming to visit, so no one would be aware she was passing the time alone. Burlington, Vermont, her home for half her life -- the married half -- had become a dollhouse, the fourth wall removed, the vacated and cluttered rooms of her solitary existence visible for all to see. Why had she waited so long to get away?