Accessibility links
Thomas Day: A Master Craftsman, With Complications Thomas Day was a successful North Carolina furniture builder and woodworker in the decades before the Civil War. He was also of mixed-race heritage -- and he appears to have owned slaves. A new book and exhibition tell his story. 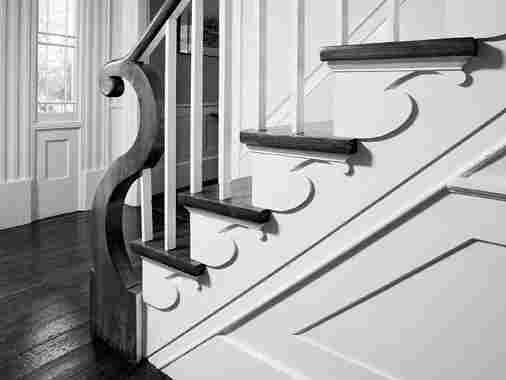 This bold, curving newel post at the house of a prominent North Carolina politician was one of Thomas Day's design trademarks. Tim Buchman hide caption 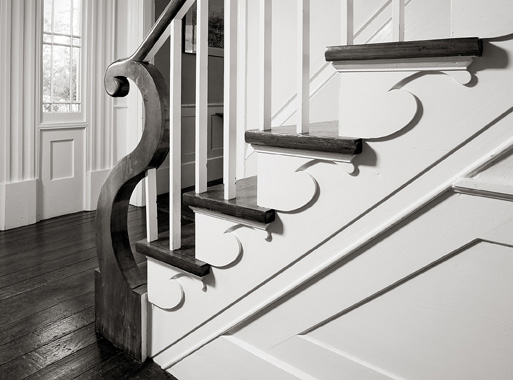 This bold, curving newel post at the house of a prominent North Carolina politician was one of Thomas Day's design trademarks.

In the decades before the Civil War, it was a mark of distinction and prestige for a wealthy tobacco farmer to own furniture made by a North Carolinian named Thomas Day. Now, there's renewed interest in this master craftsman's legacy and personal history -- in part because of the quality of his work, and in part because he was a black man who appeared to own slaves.

Leimenstoll is the co-author of a new book about Thomas Day, whose workshop produced sofas, dressers, bookcases, tables and chairs, plus heaps of architectural ornamentation: fireplace mantels and scrollwork along doors and moldings. The newel post -- serpentine, handsome, strong -- in the center hall of Yancey's homestead is a fine example of his work. 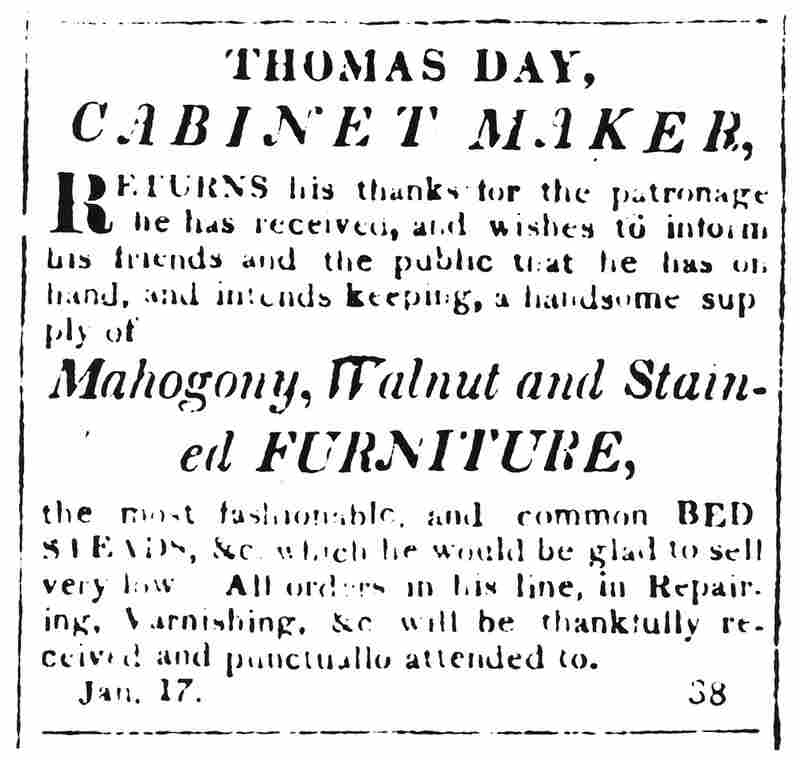 No photos of Thomas Day are known to exist -- though this advertisement for his business, published in the Milton Gazette & Roanoke Advertiser in March 1827, does survive. North Carolina Office of Archives and History hide caption 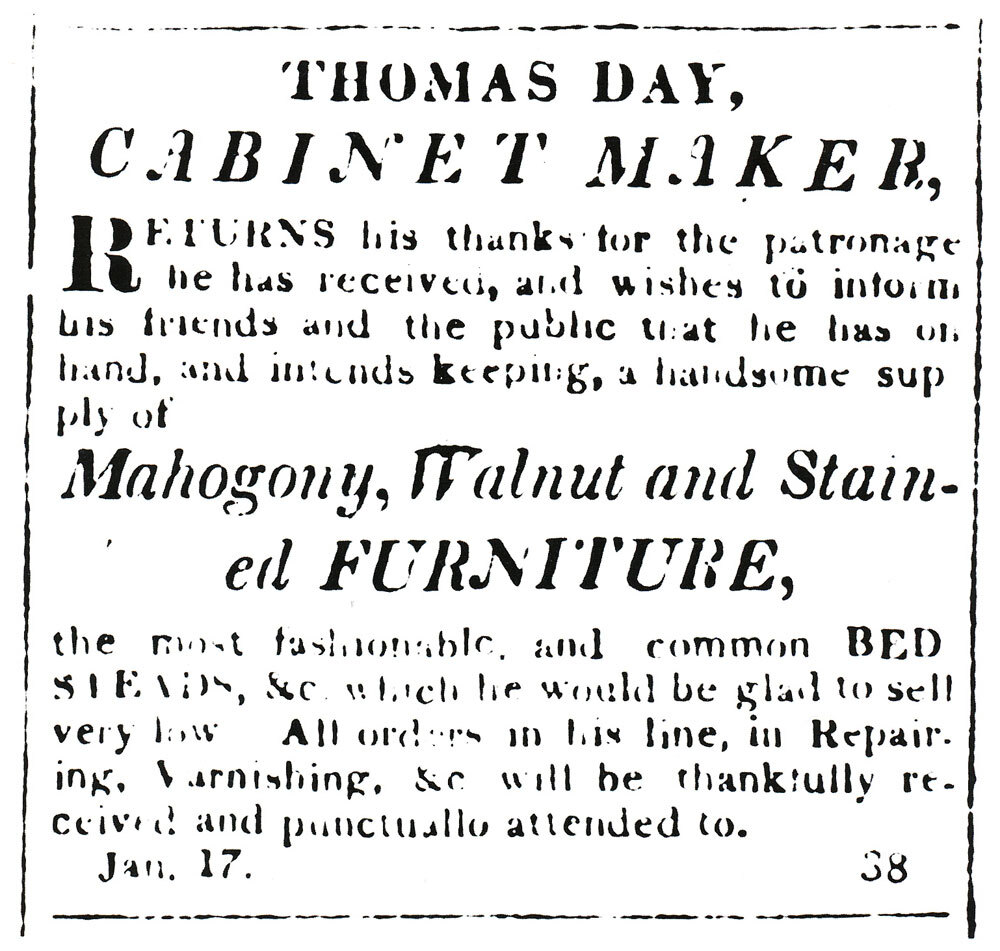 No photos of Thomas Day are known to exist -- though this advertisement for his business, published in the Milton Gazette & Roanoke Advertiser in March 1827, does survive.

"Very bold, very chunky, very fluid, very energetic in form with a sweeping handrail leading up to the landing of the staircase," Leimenstoll says, admiring it. "Suggesting that the gentility continues even onto the second floor."

Yancey wasn't Day's only prominent customer; he did work on commission for a former governor, and filled a big order from the University of North Carolina, Chapel Hill. Day's method was to take designs that were popular up North and add his own touches -- such as that S-shaped newel post.

"He was an entrepreneur, in that he took advantage of every opportunity that was presented to him," says Pat Marshall, who co-wrote the new book on Day and curated an exhibition at the North Carolina Museum of History in Raleigh, where some of Day's woodwork is on display through May of next year. 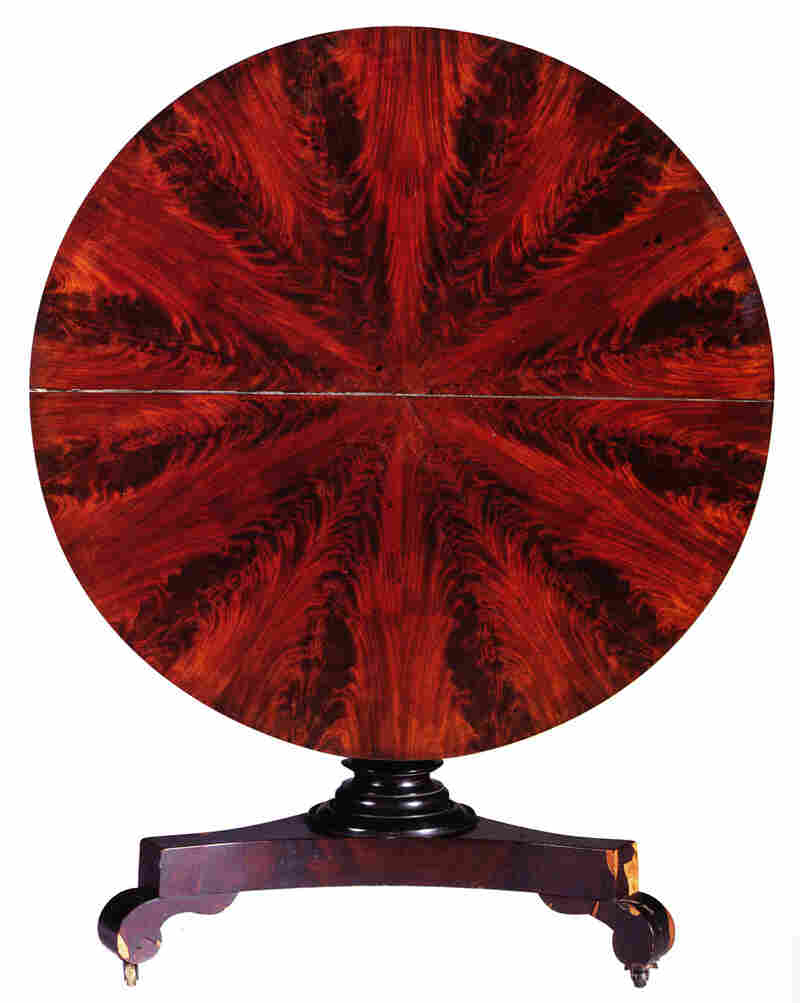 In 1857, Thomas Day was awarded the prize for "Best Centre Table" at the annual state fair in Raleigh, N.C. It was likely similar to this table, which is currently in a private collection. NC Museum of History hide caption 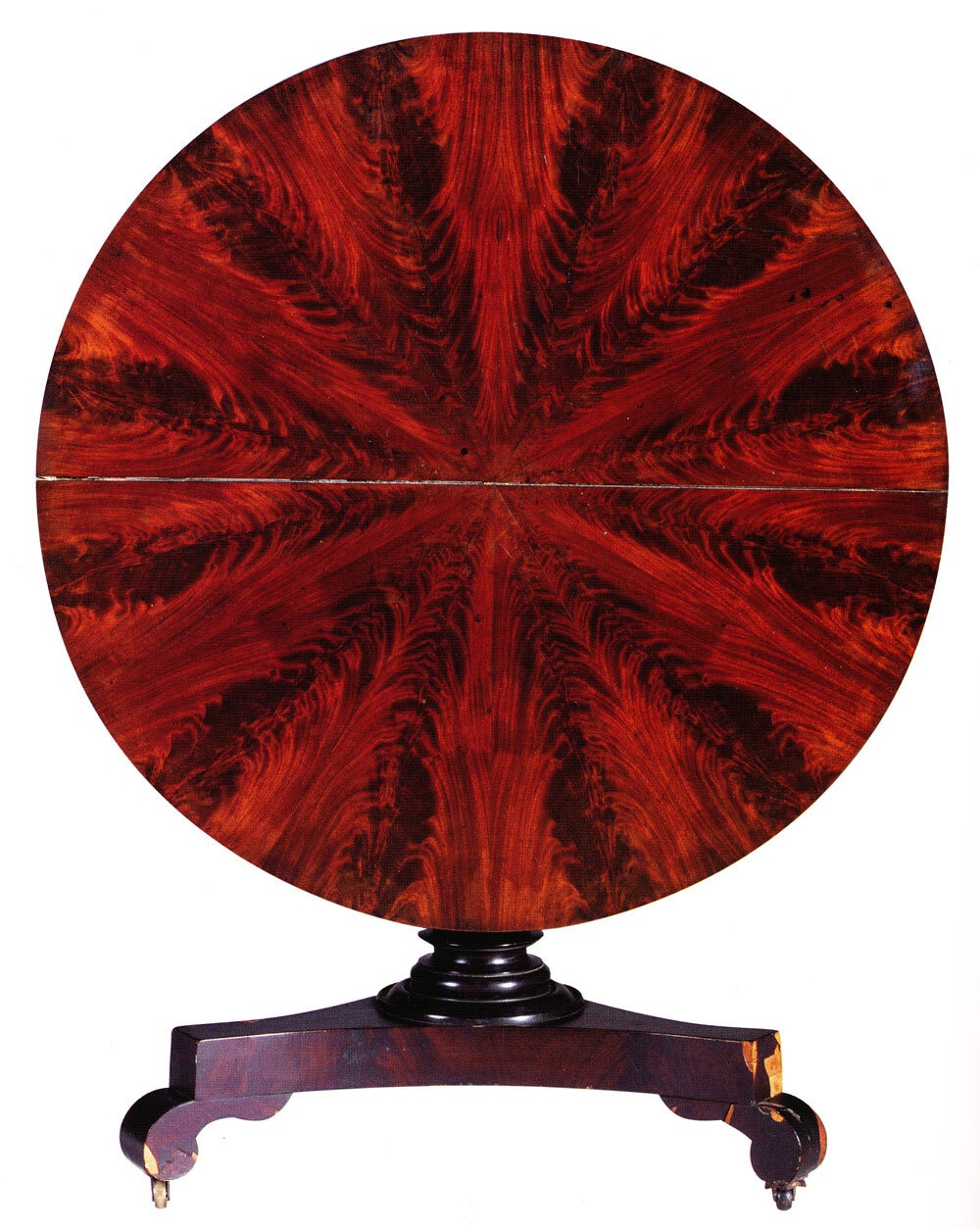 In 1857, Thomas Day was awarded the prize for "Best Centre Table" at the annual state fair in Raleigh, N.C. It was likely similar to this table, which is currently in a private collection.

Day's success is that much more remarkable because it was the antebellum South and he was black. Mixed race, technically: light-skinned, and not a slave. But a free black man who nevertheless had to live with danger and uncertainty about the future. The laws changed all the time, though his influential white customers protected him to a point.

In 1857, the economy collapsed, and Day's business went bankrupt. As a black man, he wasn't able to collect from his white customers when their accounts became delinquent. But Day and his son reorganized, and to some extent his business was able to recover.

Then there's the other twist to his story. Even though some of his workers were paid journeymen, Day also owned slaves -- 14 of them, according to the 1850 census.

"There was a small percentage of free people who did own slaves during that time," says Marshall. "It was not unheard of. But it was not common."

It was complicated, says Peter Wood, who taught American history at Duke University for four decades. And sometimes it was a ruse.

"I think there's a great misunderstanding about what it means for people to own slaves. If you are an African-American opposed to slavery but engaged in business with wealthy white planters in North Carolina, the best 'cover,' if you will, for the workers that you have with you is to call them slaves," Wood says.

Sometimes it was a way of keeping a family together -- yours or someone else's.

"Very often, blacks purchased other blacks as a way either to buy their freedom or to assure their safety until freedom arrived in some other form," says Wood. 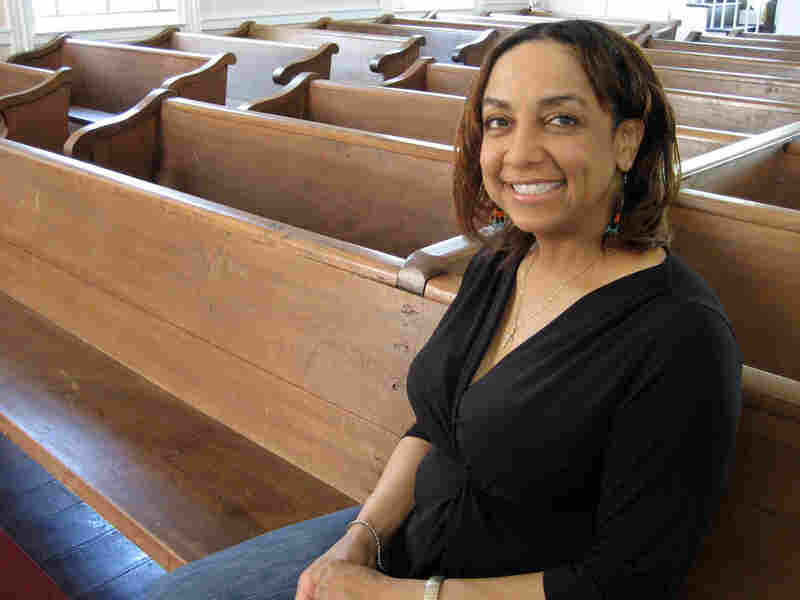 Carolyn Boone, Day's great-great-great-granddaughter, sits in the pews of the Milton Presbyterian Church, which were built by her ancestor. Fred Wasser hide caption 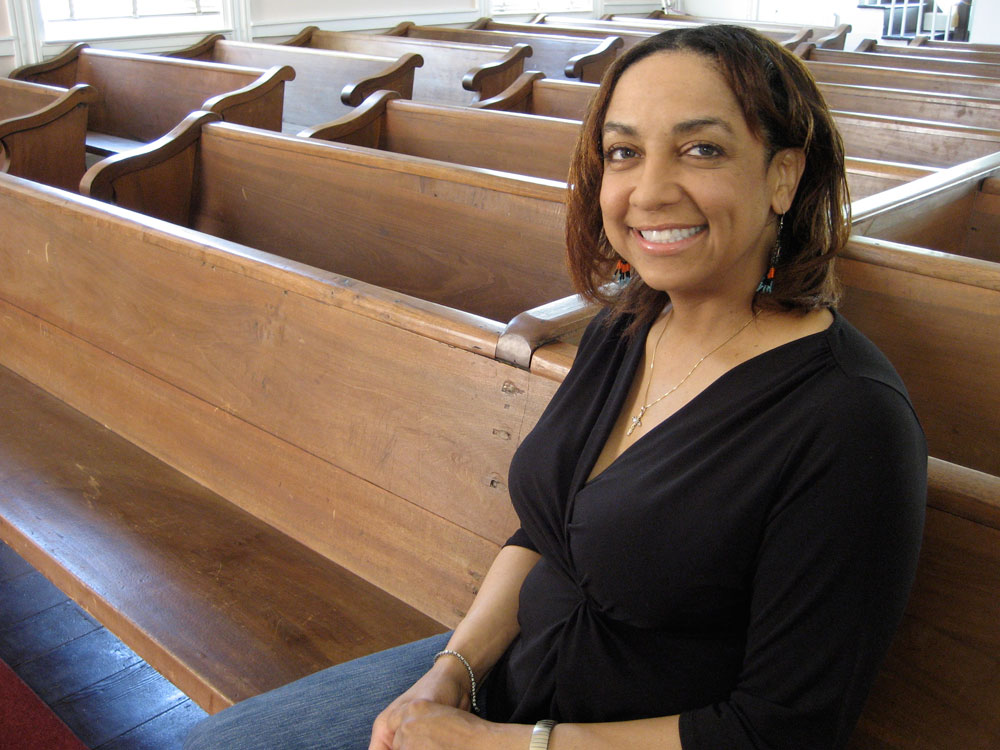 Carolyn Boone, Day's great-great-great-granddaughter, sits in the pews of the Milton Presbyterian Church, which were built by her ancestor.

Some say that Day was a secret abolitionist. Others say he owned slaves simply because it was good business. Even though he was black, the argument goes, he still had furniture to turn out -- and slave labor fueled the South's economy. Either way, there's a lot of debate among scholars right now about Day's role as a businessman and slave owner.

"He was in the business of rescuing slaves. And I want to clarify that," says Carolyn Boone, great-great-great-granddaughter of Thomas Day.

She's standing in front of the Union Tavern in Milton, N.C. Day bought it in 1848 and turned the building into his workshop and his home. Many of his workers lived here, too. Boone believes that Day treated his slaves like family -- that his tailors made their clothes; that they all sat down to the dinner table together, and prayed together. In her view, many of the answers about the enigmatic Thomas Day are embedded in the stories that were passed down in her family.

"There's a lot of conversation going on about him being a black slave owner and what that meant -- a lot of conjecture about why he owned slaves," says Boone. "And without really knowing -- without having anything in writing -- it's difficult to determine. But oral history is very potent and very important, especially when you're dealing with families of color, because often that's all there is. If he wanted to be in the practice of using slaves, he could have had hundreds. He only had a few. And according to our family lore, he purchased these slaves to rescue them."