Accessibility links
Regulators Want Truckers On Road To Shape Up Federal regulators have announced plans to step up scrutiny of sleep apnea and other health issues affecting truckers, who are more likely than average Americans to be overweight. The move has prompted a health craze -- or what passes for one -- among truckers. 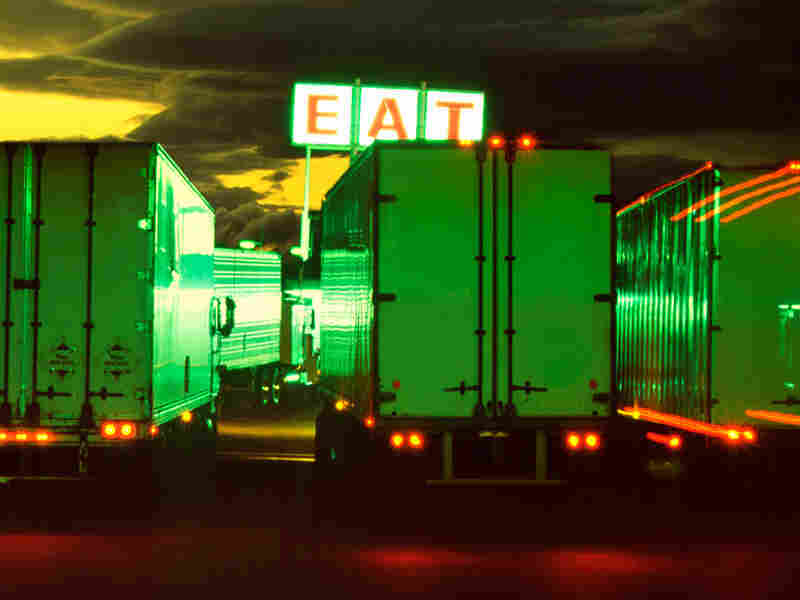 Truckers are more likely than average Americans to be overweight, which can lead to health problems including sleep apnea. Deborah Davis/Getty Creative hide caption 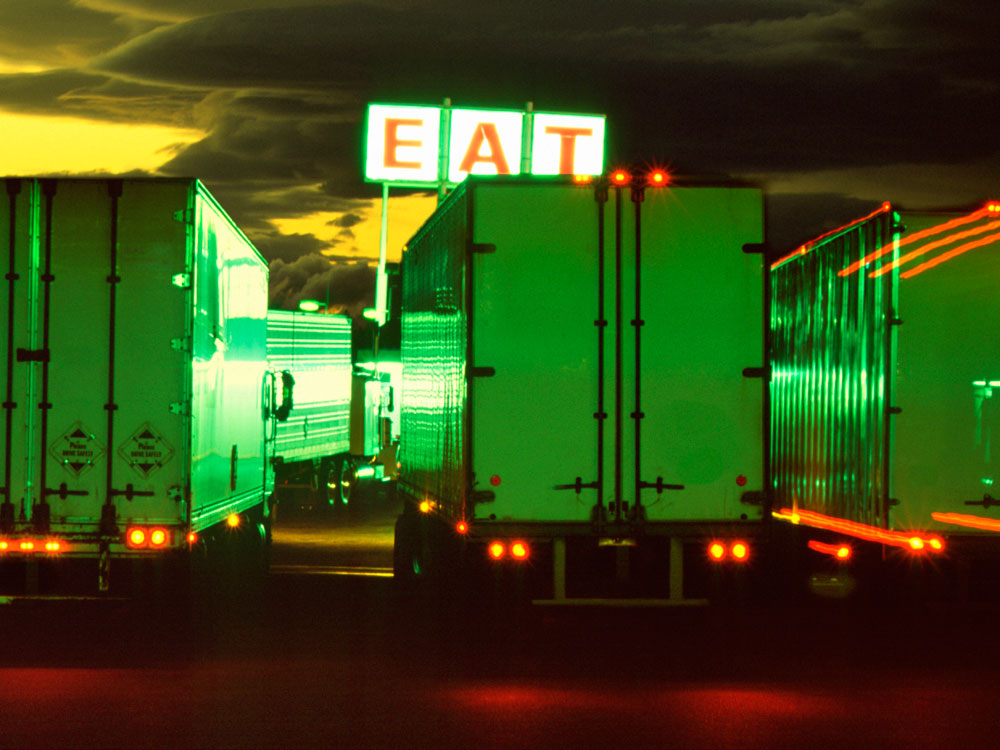 Truckers are more likely than average Americans to be overweight, which can lead to health problems including sleep apnea.

Federal regulators have announced plans to step up scrutiny of sleep apnea and other health issues affecting truckers, a move that has put them on notice to get healthy.

Truckers are more likely than average Americans to be overweight, which can lead to health problems including sleep apnea, which disrupts sleep and causes fatigue -- contributing to thousands of crashes a year. No one knows for sure because the government has never required that drivers be tested.

Outside the Iron Skillet restaurant on I-70 east of Kansas City -- where you can get a salad, but the chicken-fried steak and eggs with gravy sure look more appealing -- it appears few truckers are going hungry.

Mumma's got company. Doctors writing federal transportation policy believe that up to 40 percent of professional drivers are significantly overweight.

Sitting in his truck, Marty Ellis blames the job. "Since I went to work here, I've gained 100 pounds -- because you're sedentary," Ellis says. "This is your job -- to sit behind this wheel."

And they sit for 10 or 11 hours a day, weeks at a time, many of them, following the work. Ellis says it's hard to arrange a checkup, harder still to park a 70-foot-long truck and trailer at the doctor's office.

"Most of us don't go to the doctor. We just, stay clear of 'em, and we just keep going," Ellis says. "A lot of owner operators out here don't have insurance."

Truckers do have to get a medical exam at least every two years to qualify for their commercial driver's license. But many have been free to choose doctors who might overlook red flags, like obesity, which can trigger sleep apnea. And that can lead to fatigue, which a federal study shows to be a factor in 13 percent of truck crashes. The American Trucking Associations says nearly a third of drivers are likely suffer from sleep apnea, but the government has never required truckers to be tested for it. Ellis says they've always dealt with it on their own.

"I mean, before it didn't really matter. As long as you could drive down the road it really didn't matter. And now the regulations are starting to say, if you don't do this or you don't do that you may not drive anymore -- it's something you really, really have to think about," Ellis says.

Dr. Maggie Gunnels, who serves on a panel that's rewriting health regulations for truckers, says the panel's job is to remove high-risk operators from the road. "It's safer for them, and it's safer for the American public who travel," Gunnels says.

"So, I would say it's time to invest in your health. Hopefully many of them have started, and there are some great programs out there already for truckers," Gunnels says.

Greg McDermand, who works for a company that sells mobile sleep apnea treatment machines to truckers, encourages them to get a little bit of exercise. "We actually encourage the guys just to walk around your truck twice every day. Just get out and get some kind of exercise," McDermand says.

And the fitness industry's is getting in on it, too. In an exercise video, Bob Perry works out with heavy chains and a big tire, stuff truckers may have on hand.

"It's just now reached the tipping point. Every day we're seeing an increase of drivers who say, 'I need to lose weight,' " Perry says.

Perry is the president of Roadside Medical Clinics, a company opening clinics at truck stops.

And an organization called the St. Christopher Fund is taking health screening on the road.

Osborn suggests that because truck drivers have limited room in their trucks, they keep an alloy folding bike in their cabs -- the kind you might expect to see an elderly person riding -- so they can get some exercise. It may be kind of a stretch to imagine that happening in the macho cap-and-cowboy-boot culture of trucking. But it's a step in the direction that more and more truckers will be taking, as they try to improve their health, before the government steps in.