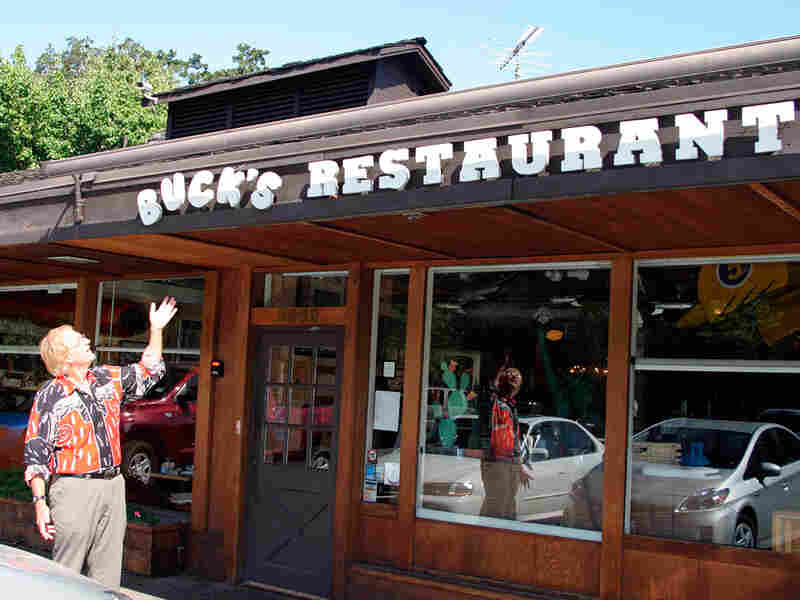 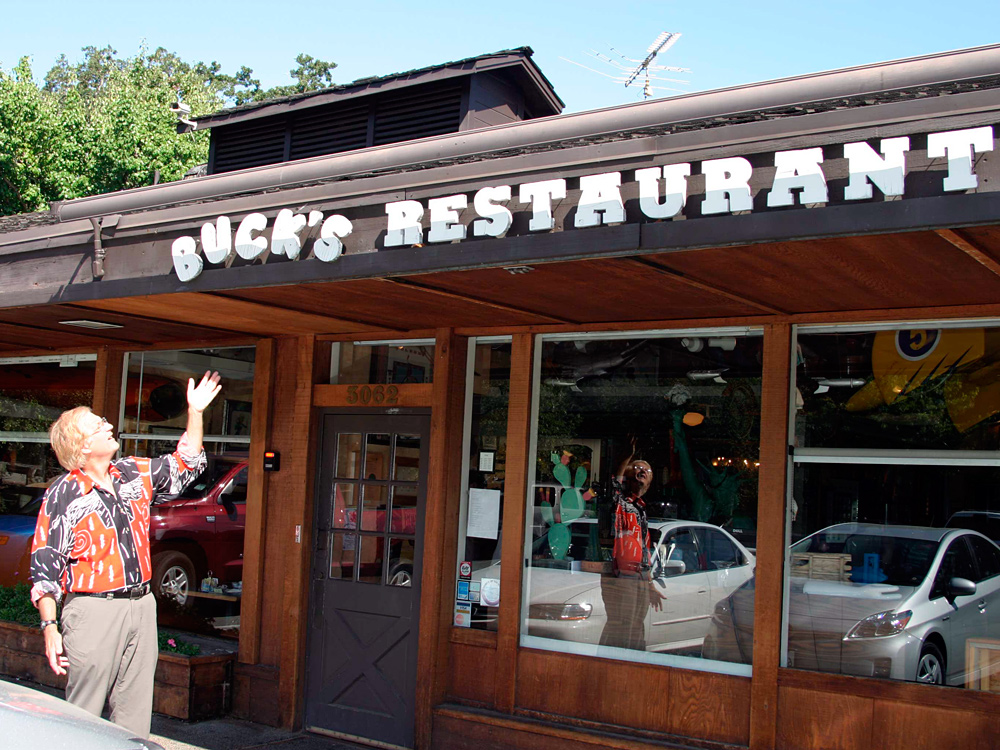 Jamis MacNiven bought Buck's Restaurant in 1991; it quickly became a hangout for venture capitalists from around Woodside, Calif.

A restaurant in Silicon Valley may very well be a sign of better economic times ahead. It's called Buck's, where big deals have been discussed and made since the '90s, riding the tide of rising Internet fortunes.

According to owner Jamis MacNiven, there's an impressive list of deal-making history at Buck's.

And Yahoo, according to MacNiven, was turned down during a meeting at Buck's. The restaurant is just miles from Sand Hill Road, site of the nation's largest aggregation of venture capital firms.

Last year, after the economic downturn, business at Buck's was down. Now, all the tables are filled, and lines form during breakfast hours.

When you pull up in front of Buck's in the rural but very rich village of Woodside, Calif., there's nothing to suggest that this is one of the most important business venues in the country. A small white sign on an unassuming one-story, redwood building is all that announces the place.

Inside, the story is different. Many tables bristle with laptops and iPhones. That's appropriate, MacNiven says, because Buck's became one of the first public WiFi hotspots in the nation in the late 1990s. The restaurant had already become a hotspot for venture capitalists to do business in a friendly atmosphere.

On its surface, Buck's seems an unlikely venue for serious business. The dress code is dress-down; a suit and tie stands out like a sore thumb. And the place is a riot of color incited by an eclectic collection of, well, "stuff" hanging on the walls and from the ceiling. Everything was either collected by, or given to, MacNiven. 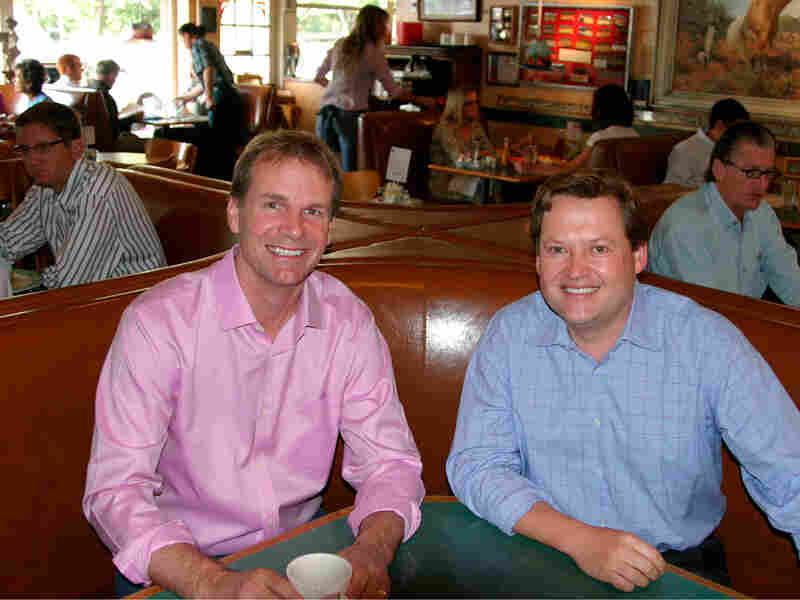 Buck's customers Dave Coglizer (left) and Jonathan Tower are old friends who both invest in clean technology. Coglizer says in the past six months, he's seen more activity in the industry and more meetings at Buck's. John McChesney/NPR hide caption 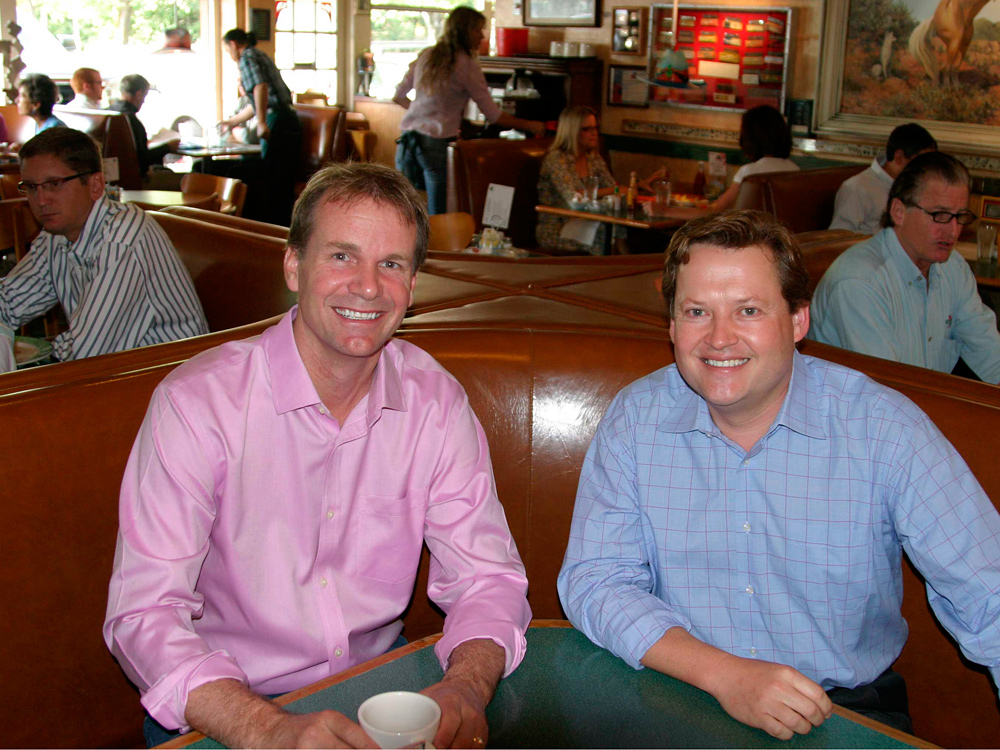 Buck's customers Dave Coglizer (left) and Jonathan Tower are old friends who both invest in clean technology. Coglizer says in the past six months, he's seen more activity in the industry and more meetings at Buck's.

There's a chair used to train Ham the chimpanzee to go into outer space and a Soviet space suit. There's also a huge blimp, several stuffed fish, a Statue of Liberty with an ice cream sundae for a torch, and on one wall, a gigantic painting of cowboy Roy Rogers on a rearing Trigger.

And then there's the owner himself: decked out in custom-made, screamingly loud shirts, irreverently seating his customers.

"Gentlemen, can I get you a table?" MacNiven greets a group. "Sit down, shut up and order the most expensive thing on the menu."

A member of the group pipes up. "I'd like a nice filet," he says. "The last one was so bad, I'd like one that is edible this time."

At another table, Gordon Haight and his sometime-business partner Danny Essindi are meeting over breakfast. Haight casts a seasoned eye over the room.

"Here you have two guys on their Blackberries," he says. "I know this table over here. The guy on the right is selling, the guy on the left is buying. I know people in the other room are doing a pitch right now."

And then Haight excuses himself; he needs to take a call from an investor.

Some people see Buck's as an informal barometer of business -- a meeting place for money and innovation on the bleeding edge of the economy.

Dave Coglizer, a venture capitalist who invests in clean technology, has been coming here for years. He says that a year ago, a lot of fear was holding back investments.

"But for the last six months or so, we see a lot of activity," he says, "a lot of great business plans, and see a lot more promise for the future in the overall markets."

And many of those plans are being discussed here at Buck's, only a few miles from Stanford University. Oh, and then there's Woodside itself, the horsey home to dozens of Silicon Valley gazillionaires.

So how does MacNiven know things are looking up?

"I noticed that one of my waitresses is driving a Bentley," he says. "I think that's a sign of good times."

Is that a fact? Not really, he says.